The Curious Strength of a Sea Sponge’s Glass Skeleton

A glass sponge found deep in the Pacific shows a remarkable ability to withstand compression and bending, on top of the sponge’s other unusual properties. 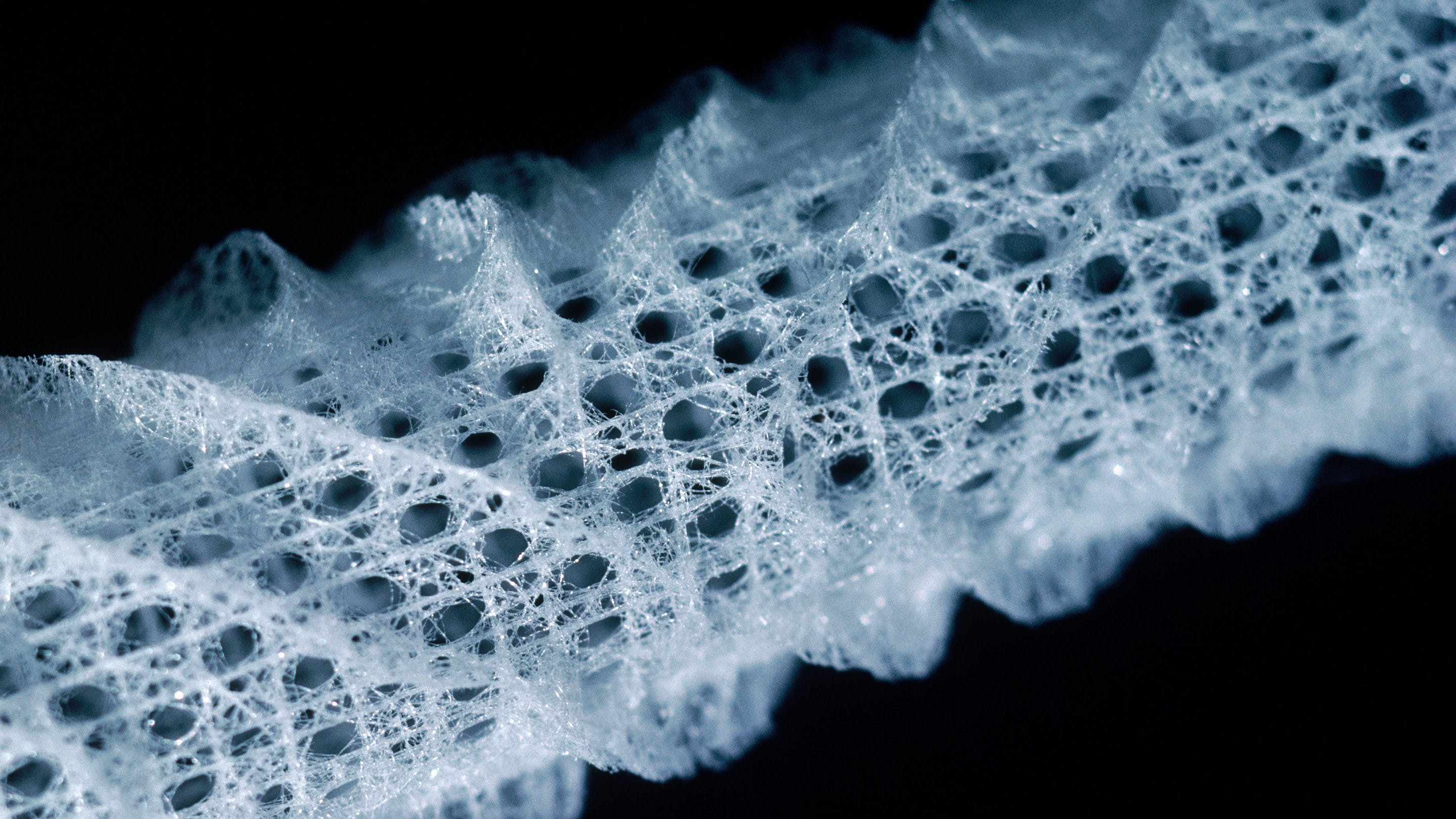 In 1841, the English biologist Richard Owen marveled at the intricate skeleton of a new sea sponge species found near the Philippines. It resembled “a delicate cornucopia,” he wrote, one woven from “stiff, glistening, elastic threads, resembling the finest hairs of spun glass.” The skeleton is indeed made of glass, which the animal, Euplectella aspergillum—nicknamed “Venus’ flower basket,”—creates using acid extracted from seawater.

Scientists still marvel at this sponge 180 years later. Its notable properties include stunning longevity—some glass sponges are thought to live many thousands of years, placing them among the longest-lived animals—and the ability to channel light through its silica strands in the manner of fiber optics. For the last two decades, a group of biologists, materials scientists and engineers at Harvard University has focused on the feature of Venus’ flower basket that attracted Owen: the intricate design of its glass skeleton. Their recent work reveals that the skeleton is, for unknown reasons, exceptionally strong—nearly as uncrushable as possible for this kind of structure.

“It’s sort of the holy grail of engineering design,” said Dhruv Bhate, an associate professor of engineering at Arizona State University who studies the Venus’ flower basket but is not involved in the work of the Harvard team.

The skeleton’s strength derives from its peculiar lattice pattern, which first intrigued the Harvard materials scientist and chemist Joanna Aizenberg about 20 years ago. Katia Bertoldi, one of Aizenberg’s co-authors on the recent studies, was also captivated by the lattice pattern as soon as she saw it. “It’s this periodic architecture, but it’s not a simple one,” Bertoldi said. She and her colleagues wondered, “Why this particular architecture?”

They noted that the glass beams that form the skeleton of the Venus’ flower basket have a lot in common with trusses, the assemblages of beams used to stabilize bridges and skyscrapers. For well over a century, engineers’ preferred design for trusses has been a sturdy lattice consisting of a square grid with diagonals running in both directions for added support. “We’ve been doing this the same way for a long, long time,” said Matheus Fernandes, a graduate student on the team. The skeleton of the Venus’ flower basket, however, has pairs of diagonals running in both directions rather than the single diagonals crisscrossing a typical truss. These pairs are spaced apart so the grid looks like a checkerboard, with diagonals crossing every other square.

The researchers fabricated and computer-simulated a lattice based on the sponge and compared it with three other lattice structures of the same weight, including the standard truss pattern. In simulations and experiments, they saw the bio-inspired lattice withstand the most stress—first from compression in one direction, and then from opposing pressures at three points in another test—before breaking. In further simulations, they varied the number of diagonals as well as their spacing and thickness to find the lattice that could sustain the most compression. It turned out to be the one modeled on the sponge.

With its additional diagonals, the sponge’s lattice has more joints than a traditional truss and less distance between the joints, which may allow the structure to sustain greater compression before buckling, Fernandes said. The team detailed their initial findings about the skeleton’s strength in Nature Materials in September of 2020. “Deeper dives” into different aspects of these glassy skeletons are ongoing, according to James Weaver, another co-author.

The researchers are also pursuing a patent for the sponge-inspired lattice they created. Adding more strength to architectural structures without adding more weight could theoretically allow for longer bridges, lighter infrastructure that’s easier to transport, or even more streamlined engineering in vehicles bound for space. “The process of trial and error over millions of years of evolution brings out the best” in materials, said Pablo Zavattieri, a professor in civil engineering at Purdue University.

However, in the case of Venus’ flower basket, the evolutionary purpose of its incompressibility is unclear.

The sponges often live thousands of meters deep where water pressure is extreme, but this pressure comes from all directions, pressing on opposite sides of the glass beams equally and canceling itself out. The sponge doesn’t experience a “crushing force,” explained Clint Penick, a biologist at Kennesaw State University in Georgia, via email.

Penick said the sponge does need a strong structure, however, to stand up and filter plankton from the water. It also needs to contain a pair of shrimps that often permanently inhabit the sponge once they grow too big to leave it. (These occupants have earned the sponge status as a symbol of eternal love in Japan, where it is given as a wedding present.) Their sturdy skeletons may also deter predators or prevent damage from animals that might collide with them, Penick added, though none of this fully explains their ultra-robustness.

Brute strength is not all Venus’ flower basket offers. The lattice walls of its skeleton are just one of several levels of complexity in its structure. Zoom in to see how its fibers can shift slightly within its lattice walls, or how its arrangement of proteins and silica molecules stops fractures in their tracks. Zoom out to examine how the lacy skeleton allows the living sponge to filter water. Bhate’s team is investigating the way some of the strands aren’t completely attached to the others, allowing the skeleton flexibility, and he’s curious about the way the structure would stand up to twisting.

“It’s one of those things that you can spend a lifetime on, and you still have not replicated all those capabilities,” Bhate said. “And that’s why it’s exciting.”