The Doctor Will Sniff You Now

Step aside, Dr. House, Deep Nose will one day be the best diagnostician in medicine. 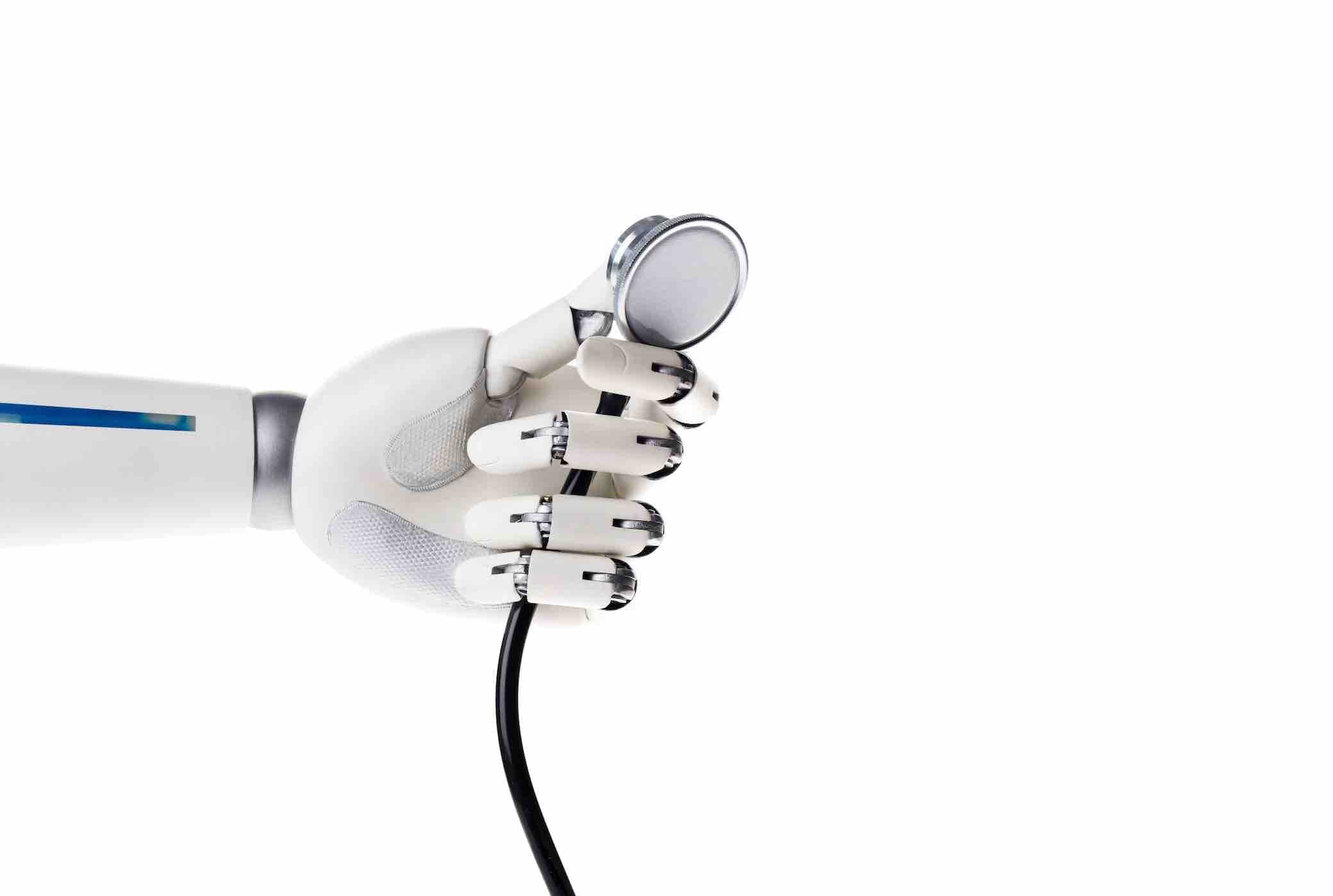 It’s 2050 and you’re due for your monthly physical exam. Times have changed, so you no longer have to endure an orifices check, a needle in your vein, and a week of waiting for your blood test results. Instead, the nurse welcomes you with, “The doctor will sniff you now,” and takes you into an airtight chamber wired up to a massive computer. As you rest, the volatile molecules you exhale or emit from your body and skin slowly drift into the complex artificial intelligence apparatus, colloquially known as Deep Nose. Behind the scene, Deep Nose’s massive electronic brain starts crunching through the molecules, comparing them to its enormous olfactory database. Once it’s got a noseful, the AI matches your odors to the medical conditions that cause them and generates a printout of your health. Your human doctor goes over the results with you and plans your treatment or adjusts your meds.

That’s how Alexei Koulakov, a researcher at Cold Spring Harbor Laboratory, who studies how the human olfactory system works, envisions one possible future of our healthcare. A physicist turned neuroscientist, Koulakov is working to understand how humans perceive odors and to classify millions of volatile molecules by their “smellable” properties. He plans to catalogue the existing smells into a comprehensive artificial intelligence network. Once built, Deep Nose will be able to identify the odors of a person or any other olfactory bouquet of interest—for medical or other reasons. “It will be a chip that can diagnose or identify you,” Koulakov says. Scent uniquely identifies a person or merchandise, so Deep Nose can also help at the border patrol, sniffing travelers, cargo, or explosives. “Instead of presenting passports at the airport, you would just present yourself.” And doctor’s visits would become a breeze—literally.

What can one’s odor tell about one’s health? Apparently, a lot. “The information that can be picked up from the airborne molecules is amazingly rich,” says Dmitry Rinberg, also a former physicist and now a neurobiologist at New York University who collaborates with Koulakov on olfactory research. “It’s so informative that you can tell what kind of beer people drank at a bar last night.” Odor can reveal other things happening with the body, he adds. “So we are trying to use this information for odor-based diagnostic approaches.”

Recent research finds that many diseases, including cancer, tuberculosis, and Parkinson’s, can manifest themselves through volatile compounds that change the person’s scent. Our bodies release certain metabolites—products of our metabolic activities. Some of these molecules are volatiles and become part of our scent, or “odorprint.” When we become sick or start developing a disease, our metabolic processes start functioning differently, emitting different volatile molecules or mixtures of them, so our odorprint changes too. “These molecules carry information about our state of health,” Koulakov says. For example, patients with Parkinson disease produce an unusually high amount of sebum,1 a waxy lipid-rich biofluid excreted by the sebaceous glands of the skin, which sensitive noses can detect. Deep Nose could grab this information from the thin air. That could allow physicians to detect disease sooner, easier, and perhaps avoid some invasive diagnostic procedures. “It would essentially revolutionize the diagnostics system,” Koulakov says.

Deep Nose matches your odors to the medical conditions that cause them.

Hippocrates, Galenus, Avicenna, and other physicians of ancient times used their noses as diagnostic tools. A wound with a nasty smell could mean it was infected. And bad breath signaled a host of ailments. Today, however, physicians don’t sniff their patients—because humans generally stink at smelling. In fact, we are worse than our ancestors. Our primate predecessors sported about 850 olfactory receptor types, but we retained only 350 functioning ones, which in various combinations allow us to smell an astronomical amount of odors. (The rest of them simply don’t work. “They are the remnants of our former glory,” Koulakov quips.) Meanwhile, dogs have about 850 receptor types and mice about 1,100 or 1,200, so they are capable of discerning a much greater variety of smells—including those produced by the malfunctions of our bodies.

Scientists now use that animal olfactory wealth to diagnose disease—with some documented success and peer-reviewed studies. Recently, a group of scientists from several research institutions presented their results of training three beagles to sniff patients’ blood samples and detect lung cancer cells in them with 97 percent accuracy.2 A study published in British Medical Journal stated that dogs were able to detect colorectal cancer by smelling stool.3 Another paper in BMC Cancer described dogs smelling out ovarian cancer.4 And African giant pouched rats had been taught to work as “tuberculosis diagnosticians” in Sub-Saharan Africa, sniffing sputum samples from patients. Microscope detection accuracy can vary from about 20 to 80 percent. The rats’ noses helped improve detection by up to 44 percent.5

But animal diagnosticians have their problems. First, they must be trained, and training large numbers of animals that don’t live very long is expensive, time-consuming, and somewhat futile. Plus, every time you’d want to add yet another disease scent to their analytic arsenal, you’d have to train all of them again. “The use of animals for actual diagnostics is very limited,” Rinberg says.

That led scientists to ponder the possibility of an electronic nose instead. It would be far more economical to build an artificial sniffer apparatus that wouldn’t die after a few years, with standard software that can be updated regularly across all the board. And that’s how Koulakov envisions Deep Nose—an electronic olfactory AI that can function as a nose that picks up scents and as a brain that interprets them. That, of course, is no easy feat. Deep Nose is modeled after the neuro-machinery of the human brain, but scientists have yet to figure out how the human brain identifies one scent from another.

Biologically, the act of smelling is more complex and less understood than our ability to see. Recognizing a scent is a precise and intricate process in which chemistry, biology, and physics must play together in a synchronized concerto—whether you’re relishing the aroma of a rose or pinching your nose at a pile of dog poop.

Inside your nasal cavity, millions of olfactory neurons are waiting for the next smelly molecule to fly in. These neurons have microscopic finger-like protrusions called cilia, which float in the mucus covering the surface of the nasal epithelium. The neurons’ other ends, called axons, stretch upward, passing through special passages inside the skull all the way to the brain, leading to the region called the olfactory bulb, named so for its onion-like shape. When molecules fly into our nose, they bind to the cilia, and the neurons send this information to the olfactory bulb, which interprets it, resulting in our sensation of the smell. It would also pass these signals to the olfactory cortex, whose neuro-machinery would determine the quality and the concentration of the smells.

Some molecules bind to certain receptors but not to others. Depending on the specific combination of receptors the molecules lock onto, we would smell roses or dog poop. But even that seemingly simple molecular handshake remains mysterious. Some scientists believe in the “steric binding theory,” which states that the molecules fit receptors’ distinct physical shapes. Others support the “vibrational theory” that purports that olfactory receptors detect the molecules’ vibrational frequency and “translate” them into odors. “The steric theory suggests that there is a binding pocket of a particular shape, and some molecules will fit there, while others may swim away in the mucus,” Koulakov says.

Regardless of which theory proves correct, Deep Nose builders still face a huge challenge. The nose part, which would mimic the neuronal binding action, will require chemical sensors. These sensors will interact with the flying molecules—whether by binding or a different method—and detect their presence. The sensors will then send electrical signals to the electronic brain—the Deep Nose network that will interpret what molecules have been detected. Koulakov envisions it functioning as a network of multiple layers that will be able to recognize different parts of the molecules and different chemical groups within them—just like different neurons react to the presence of different molecules inside biological brains.

Luckily, researchers can see how that neuronal activity happens inside living brains. Modern technology allows one to peek inside the brain, seeing what olfactory receptors activate in response to what odors. That requires brain surgery and genetic manipulation, so it’s not possible to do in people, but mice and rats can help. That’s where Rinberg’s lab comes in. His team uses genetically modified mice whose olfactory neurons are tinted with fluorescent proteins that light up when they engage in response to an odor. The team can watch that process through a window implanted into the rodents’ skulls. “We genetically encode mice so they are born with fluorescent proteins in the olfactory bulbs of their brains—and we can see how the olfactory neurons light up,” explains Rinberg. “It can let us see that a rose, for example, excites receptors number 27, 72, and 112, while dog poop excites a different subset of receptors. But who knows, we might also find that roses and poop actually activate some common receptors!”

Systematically gathering these neuronal activation patterns would inform scientists about combinatorial codes of receptors that activate in response to everything from roses to poop and from coffee to the wet dog smell—and all other things in the smelliverse. Similarity, specific neuronal combinations would light up in response to specific molecules, including the metabolites we produce in health and disease.

Diseases will likely manifest themselves by the presence of multiple volatile molecules—a cocktail of them, Koulakov thinks, so here rodents’ abilities would be particularly helpful. Their superb olfactory receptors that outnumber ours threefold would let them smell many more mixtures than we can, so they can help train Deep Nose on various smells that we emit but can’t detect on our own. Just like rats have been trained to detect our TB, they can be trained to sniff our tumors, while researchers can map the exact neurons that light up in their brain in response to different cancers’ smells. “Once we collect the info about what neurons activate in responses to what smells in mouse brains, we can train Deep Nose on that data,” Koulakov says. “It is important to map this ‘olfactome.’”

Science is still decades away from electronic olfactory diagnostics. However, a small army of rodents with neurons that glow in response to certain smells could help detect health ailments in about 10 years, Koulakov estimates. That’s because the technology needed for observing their colorful neuronal responses already exists, but the technology necessary for mimicking neuronal binding to flying molecules—the chemical sensors to detect our metabolites—is yet to be created. But once this is accomplished, building an electronic nose to sniff out health problems would be fairly straightforward. “Our evolution may not have designed us to diagnose disease,” Koulakov says, “but we can design a software that can do so.”