The Grace of Manta Rays 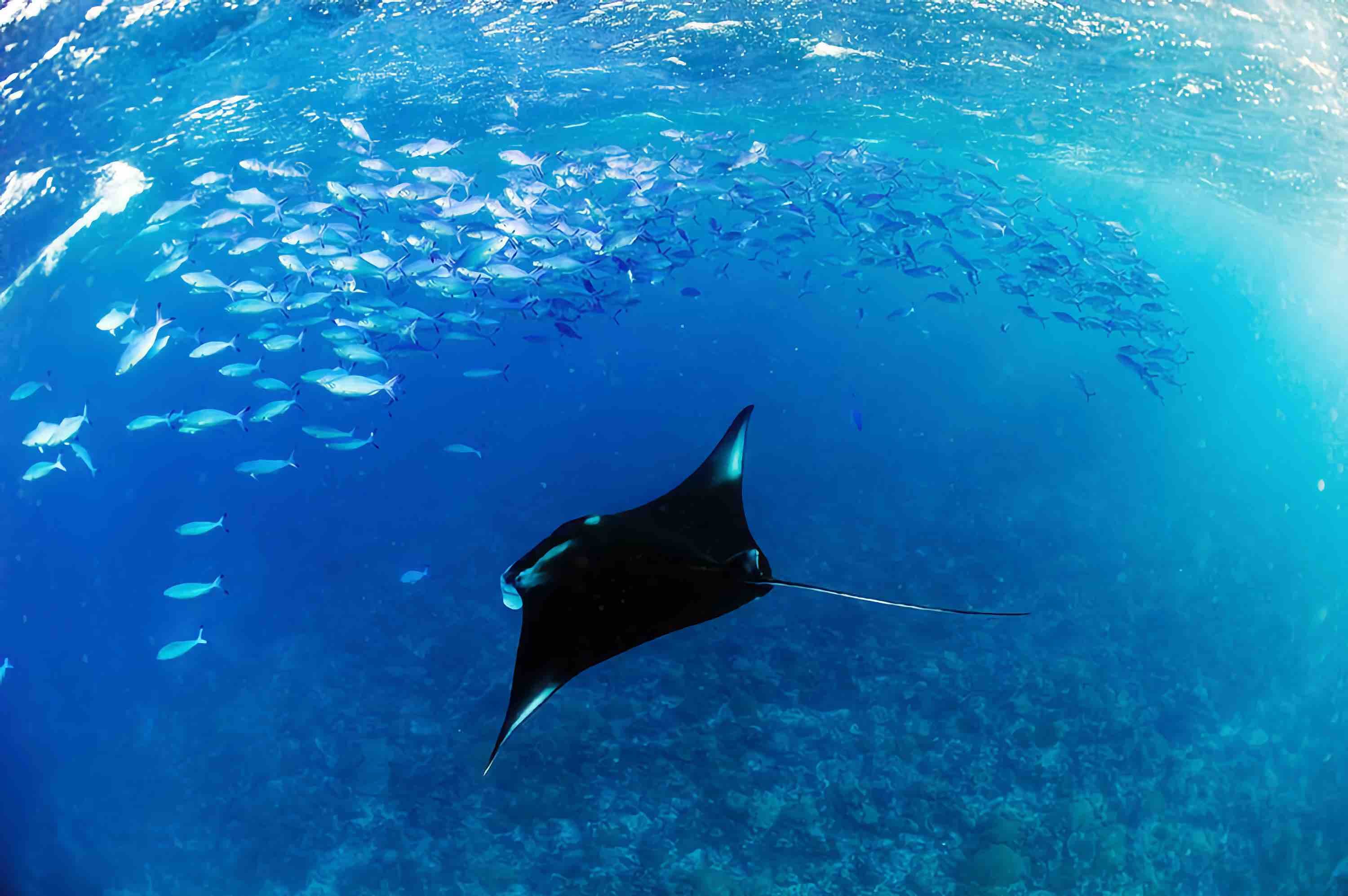 I didn’t really understand the word ‘grace’ until I swam with manta rays. These placid members of the shark family are the embodiment of grace; winged fish 14 feet across who swoop and somersault with such precision that a manta scooping up plankton at speeds of up to 22 miles per hour can graze the hair of a SCUBA diver without touching her head. And as I experienced while diving in Hawaii, if you sit quietly on the ocean floor, they’ll do it not just once but again and again before disappearing into the blue abyss, as ephemeral as a cloud.

For both their grace and their sheer otherworldly coolness, people love manta rays. The animals generate $50 million a year from tourists like me who want to swim or dive with them. But given how popular they are, much about mantas remains a mystery. They’re truly wild creatures, too big for most aquariums and too far-ranging to easily study. Their life history and migration patterns are little known. No one has ever seen a manta give birth in the wild; we have no idea where they do so. And until recently, scientists thought there was only one kind of manta. It wasn’t until 2009 that the more transient oceanic mantas (Mobula birostris) were recognized as a distinct species from the slightly smaller reef mantas (Mobula alfredi).1

“There are these big, intelligent creatures roaming around and we just don’t know much about them,” says Sammy Andrzejaczek, a shark scientist with the Hopkins Marine Station at Stanford University.

Studies have shown that overfishing has reduced some manta populations by 80 percent, and the IUCN Red List classifies both species as Vulnerable and declining. Scientists are now trying to gather the basic information that could help the animals survive. In the process, they’re learning that manta rays are more complex and fascinating than anyone imagined—bestowing their grace not just on humans lucky enough to swim with them, but on entire ecosystems.

The mere fact that we share a planet with manta rays is its own grace.

One way mantas shape marine environments is by traveling regularly between the deep ocean and coral reefs. Lauren Peel, a biologist with the Manta Trust and Save Our Seas Foundation, explains that in doing so, mantas move nutrients through the ocean. They eat a certain type of zooplankton that only lives offshore, for example, then return to coral reefs and defecate, depositing a suite of nutrients not otherwise available in the shallow seas. “They’re essentially fertilizing coral reefs,” says Peel, who published a 2019 study on the discovery.

Peel and her colleagues believe this fertilization may boost reef growth, which not only leads to a greater biodiversity of corals and sponges but also supports the invertebrates, fish, mammals and reptiles that call reefs home. By analyzing tissue samples from 50 reef mantas and 20 different types of fish in the Seychelles, Peel also found that mantas are the only animals performing this essential fertilization. “On top of being able to move such large distances and access different zooplankton sources, they’re consistently feeding, so they’re able to supply a larger amount of nutrients over a larger period of time over a larger spatial scale,” Peel says.

Still, the realization that protecting mantas benefits entire coral communities isn’t enough to save the species. Unlike some other imperiled fish, mantas are not targeted by an organized fishery that will grudgingly adhere to conservation measures like bag limits. Instead, mantas are killed by small local fisheries, poachers who sell their gills for traditional Chinese medicine, and commercial fishermen who accidentally take mantas as bycatch. That means the best way to protect them might be through refuges where no fishing is allowed at all.

Of course, keeping poachers out of vast, open marine protected areas (MPAs) is its own challenge. That’s one reason why Andrzejaczek analyzed the movement of reef mantas in the British Indian Ocean Territory MPA. By showing where mantas hang out, her data are helping patrol boats better target their policing.

To create adequate marine refuges, scientists must also to figure out how far mantas roam. A 2019 study showed that one reef manta swam a whopping 714 miles—hundreds of miles farther than the previous known record. Andrzejaczek, on the other hand, found that all 33 tagged mantas in her study stayed within the 200-mile span of the British Indian Ocean Territory MPA. Perhaps, she theorizes, some reef mantas migrate long distances while others stay local to a particular reef.

Manta rays’ charisma could play a role in saving them, too. After a 2013 study showed that a live manta can bring $1 million in tourism revenue in over its lifetime, compared to $500 dead, Indonesia joined Australia, Ecuador, the European Union, Mexico, New Zealand, the Philippines, Yap, Guam, the Northern Mariana Islands, Hawaii and Florida in banning manta ray fishing. The Manta Trust is also creating guidelines for sustainable manta ray tourism, like instructing divers to stay calm and let mantas guide the encounter.

“It’s understandable that people get excited,” says Annie Murray, a marine biologist with the Manta Trust. “But unfortunately that can lead to people swimming really fast, chasing the manta to try to get the best selfie, and that’s going to disturb them, especially when they’re feeding.”

Murray herself has swam with dozens of mantas, each with distinct personalities. Without prompting, she, Peel and Andrzejaczek each described the animals’ curiosity and intellect with an awe that’s rare among scientists. “When you swim with mantas, it’s an interaction between the two of you,” says Murray. “That’s what got me in the beginning. But from a more scientific point of view, I’m fascinated not only by how they interact with humans, but with each other.”

Manta rays have the largest brain-to-body ratios of any fish; evidence suggests they might also recognize themselves in mirrors, widely considered a hallmark of human-like self-awareness. She and others are studying how manta rays’ clear intelligence manifests through social behaviors, and whether animals long considered solitary oceanic wanderers actually operate within social networks or hierarchies. While the social research is too new to draw conclusions from, it’s within the realm of possibility that mantas form lifelong social bonds.

Indeed, the more we learn about mantas, the more it calls to mind another definition of grace—“the free and unmerited favor of God, as manifested in the salvation of sinners and the bestowal of blessings.” The mere fact that we share a planet with manta rays is its own grace, a salve that can make even the most cynical scientist weep into her dive mask over the wonder that remains in this wild world.

1 The mantas I swam with in Hawaii were reef mantas, which have a wingspan of up to 14 feet. Oceanic, or giant, mantas can be nearly 23 feet across.

Research by Samantha Andrzejaczek was funded by the Bertarelli Foundation. More about its marine science programme can be found at www.marine.science.