The Hidden Fruits of the Deep

Vast meadows sprawl far beyond the old boundaries drawn for seagrasses. They may provide a unique refuge for biodiversity. 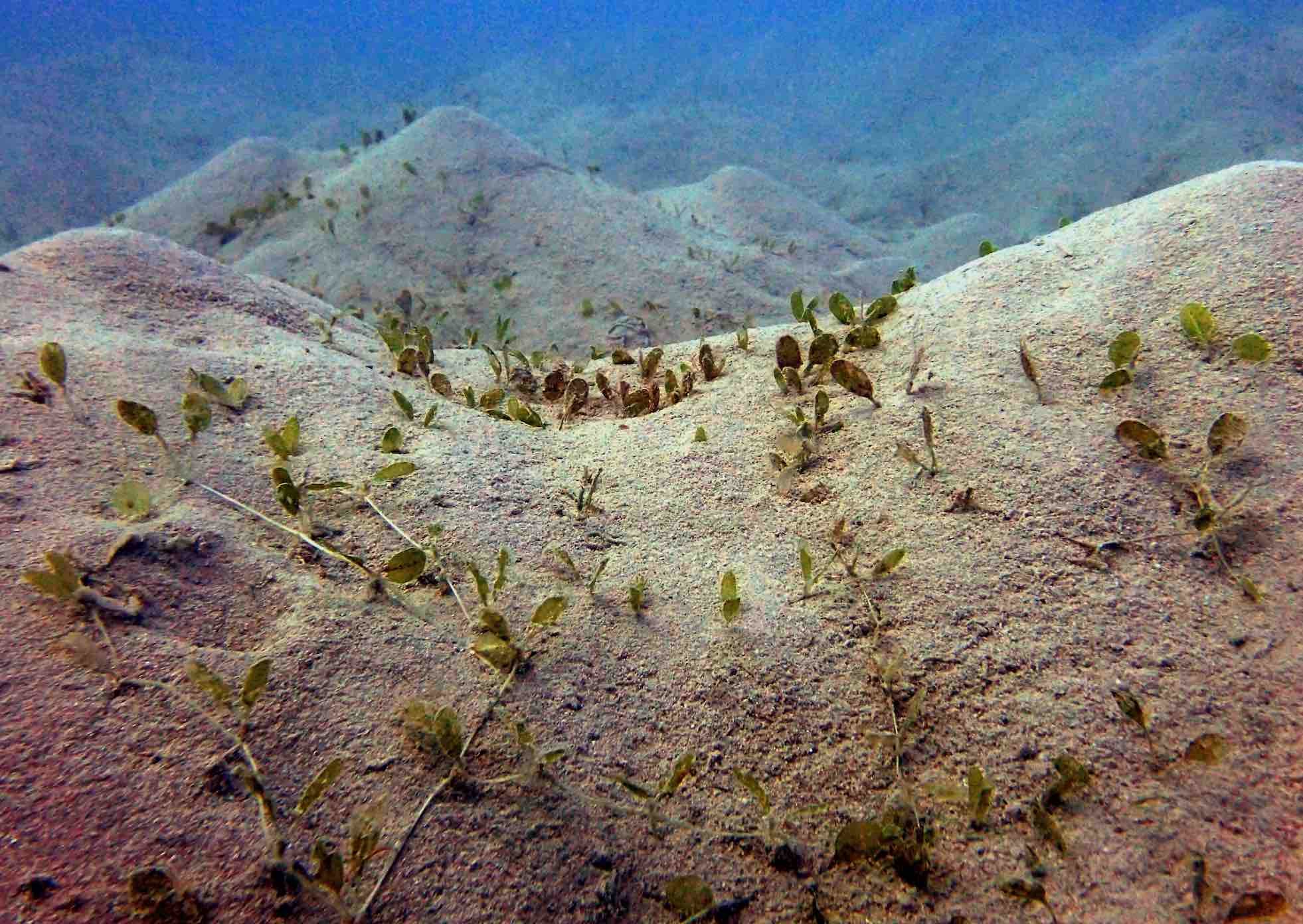 In the sheltered lagoons of the Great Barrier Reef lie sandy flats the size of Switzerland where reef-building corals refuse to grow. Much of the seafloor here resembles a moonscape hewn with small eruptions—the modest houses of timid crustacean architects.

Each year, however, when the sunlight filters through in just the right way, thousands of stout, spoon-shaped leaves encrusted with silvery hairs begin to emerge. Linked by spindly runners, they cover the seafloor within a few weeks, forming a fine herbage that dots the sediment. For several months they cling to the seabed, blossoming with tiny flowers that fruit and float below the tide. Soon they will shed their seeds into the sandy banks and lay in wait for the right sunlight to filter through once again.

Growing in interstitial spaces too deep for SCUBA-diving scientists and too shallow for deep-sea exploration vehicles, deep-water seagrasses are hidden powerhouses that have sprouted silently on the peripheries for tens of millions of years. Yet even as seagrasses are globally recognized as among Earth’s most important and productive ecosystems, studies have largely focused on shallow meadows found at depths of 15 meters or less.

Deeper meadows like those in the Great Barrier Reef lagoons have long been overlooked, in part because they’re literally difficult to see: as depth increases, light loses certain wavelengths, and colors are quickly muted. By the early 1990s, though, scientists had calculated that, based on physiological limitations, seagrasses should survive to around 90 meters below the surface. Potentially vast meadows remained to be discovered.

These meadows are the focus of Michael Rasheed and Paul York, biologists at James Cook University in Australia. Rasheed started studying these important yet obscure habitats in the mid-1990’s, when he was part of a team that towed cameras behind research vessels to map habitats across vast areas of ocean. Waiting in vain to catch an on-screen glimpse of the leafy meadows amongst the watery moonscape, the limitations of the technology quickly became apparent.

York, Rasheed and their colleagues took a different approach. In their part of the world, fat, nine-foot-long dugongs—a member of the taxonomic order that includes manatees—munch up to 35 kilograms of seagrasses a day. By following dugongs, the researchers discovered more than 30,000 square kilometers of seagrass meadows growing on the margins of their biological limits.

Among these were the largest continuous seagrass meadow mapped in Australian waters, covering some 8,750 square kilometers and consisting mostly of deep-water grasses. These new beds represented a huge increase in the potential area across which seagrasses, already known to sequester up to twice as much carbon per acre as terrestrial forests, and at dramatically faster rates, may buffer against climate change.

Another group of researchers led by Nicole Esteban from Swansea University in Wales also followed animals to deep-water seagrasses. By tracking GPS-tagged green sea turtles thousands of kilometers, Esteban and her colleagues discovered significant feeding territories on the remote Chagos Archipelago in the Western Indian Ocean. In 2016, Esteban’s team were the first scientists to dive these new sites; they expected to find the meadows at depths of 10 meters, but soon realized they extended far deeper.

Beneath the waves licking the edge of the world’s largest atoll, the Great Chagos Bank, a white calcium carbonate hill leads down to the depths. Against the current, shadows of glistening, scaled bodies wash over the seabed. Grasping coralline rubble, tangles of forty-centimeter long leaves shoot towards the filtered sunlight. Like lime green fingers waving to the shattered ceiling of water, they briefly interlock before sighing away in new directions as the swell rolls on across the slope.

In stark contrast to the system where York and Rasheed work, Esteban’s plunge took her to gardens where Thalassodendron ciliatum, one of the largest seagrasses on the planet, covers up to 90 percent of the seabed and has hundreds of fish like the large predatory grey reef shark, African white-spotted rabbitfish and red snapper swimming overhead.

Because of safety restrictions on diving below 25 meters, Esteban’s team deployed underwater cameras. They revealed that seagrasses were abundant down to at least 29 meters depth. The discovery there suggested that seagrasses could extend across hundreds—possibly even thousands—of kilometers of the Chagos Archipelago, completely changing existing maps.

The presence of such expansive canopies suggests that, in addition to sequestering carbon, deep-water seagrass meadows provide an important safe haven of food and habitat for countless marine species, including many that are currently endangered.

Updated with findings like these, estimates now suggest that the real global seagrass-meadow footprint could be 35 times greater than previous estimates of 150,000 to 600,000 square kilometers, covering an area roughly the size of the United States. These meadows may be critical refuges, for in the darker, cooler parts of the ocean these seagrasses may escape the worst of climate change and ocean-warming effects.

Now the seagrass research community is planning to follow still more marine megaherbivores to find and understand new seagrass habitats. The West Indies, Kenya and Mozambique are high on the list.

Shallow-water seagrass meadows have already been recognized as a powerful nature-based climate solution by the United Nations. They stabilize sediments and prevent erosion, protect corals, and provide critical food and habitat for thousands of species. They suck in carbon dioxide, locking it into sediment up to 40 times faster than the typical terrestrial forest, and release oxygen in return. Deep-water seagrasses likely sequester less carbon per acre than their shallow-water brethren but occupy a larger area, meaning their sequestration potential is likely vast as well.

Shallow-water seagrass meadows are rapidly disappearing, though, killed by pollution and dredging and ecosystem-disrupting human activity—and deep-water seagrasses may be threatened, too.

Without knowing exactly where deep-water meadows lie, though, we are limited in our ability to understand their value or protect them. Without exploration our knowledge is restricted to chance discoveries and anecdotal evidence. The most extreme examples suggest that seagrasses may grow even deeper than our best estimates: in 2003 some tendrils of Halophila stipulacea, a particularly hardy species adapted to low light, were collected while dredging at depths of 145 meters off the Cyprus coast.

Such discoveries of deep-water meadows radically expand our knowledge of seagrasses. They provide much-needed optimism that pristine places still exist, and remind us that there is still so much we have yet to learn.

Research by Nicole Esteban was funded by the BERTARELLI FOUNDATION.  You can find out more about its marine science programme at www.marine.science