The Light Magic of Squid

How squid transmute illumination into intention 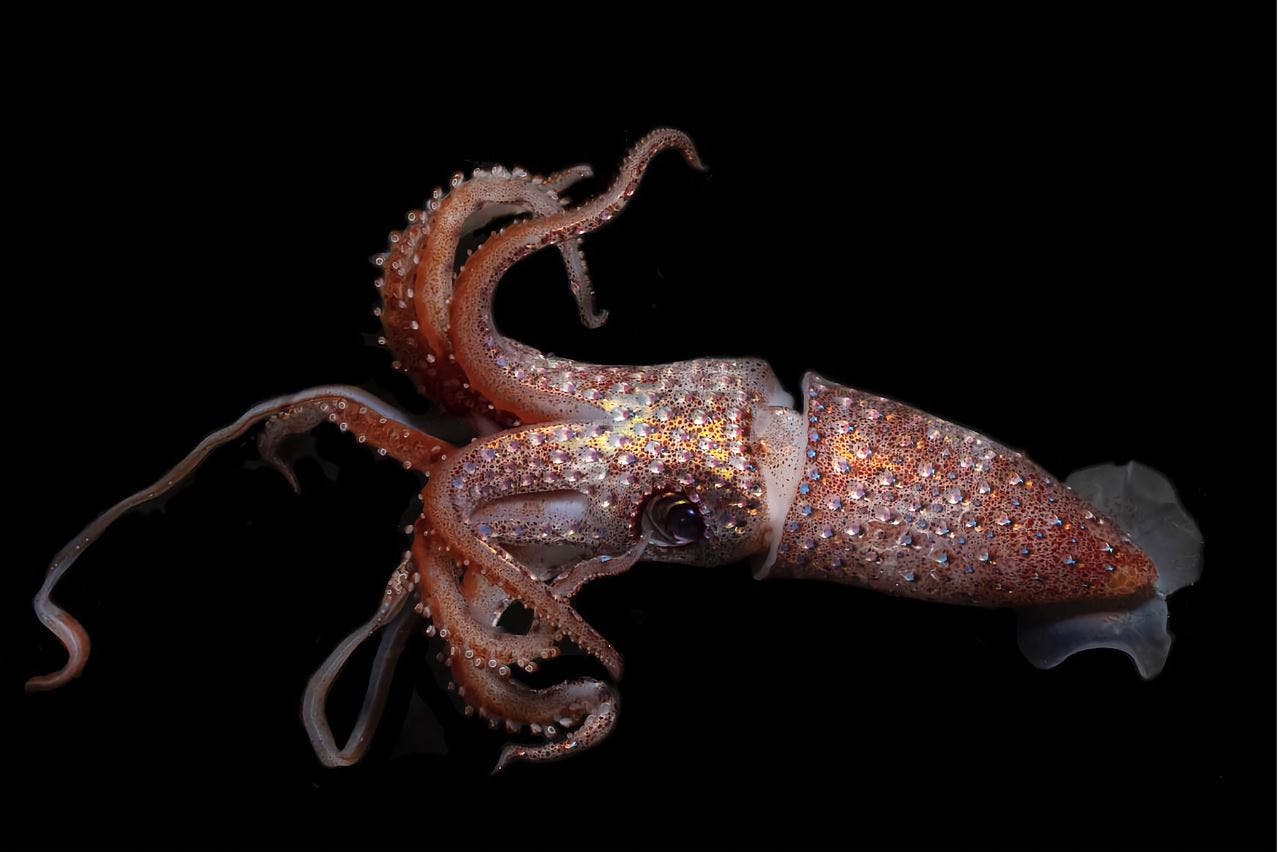 When large shoals of fish move back and forth in synchronous motion, they rely on their lateral line receptors to coordinate the group movements. Many loliginid squid appear to shoal for social reasons, spending their lives in groups synchronized in speed and direction, and swimming along parallel lines. Scientists distinguish these synchronous and cohesive groups as ‘schools’, from the more haphazardly organized shoals. These schools of squids coordinate their movements through their lateral line receptors and their vision, enabling collective movement almost instantaneously.

Squid intelligence is movement, in this sense of moving through the water, and in other ways as well. The flashing colors and shimmering of their skin heighten the dynamics of their continually changing and moving arms and mantle. Anyone who has seen living cephalopods has felt compelled to remark that their brilliant colors make them among the most beautiful of all animals, attracting biologists’ attention since the early nineteenth century. It was, in fact, squids still flashing on deck of the Valdivia that led Carl Chun to draw his beautiful hand-colored illustrations of the various species in 1899. The actual colour changes are caused by the chromatophores, complex organs numbering in the hundreds of thousands which can be described as sacs that are opened and closed by the surrounding muscles. Muscular contraction opens individual sacs to reveal the granular pigment within, and relaxation closes the sacs to make the colour disappear. The muscles and chromatophores are controlled by the same lobes of the brain that control the funnel, making for a direct connection between jet propulsion and colouration. The nervous control of the muscles also means that expansion and contraction can take place very rapidly, with some chromatophores expanded and others closed to create patterns in the skin that are impossible in other animals. Tracing the neurological line of control, scientists have learned that chromatophores are regulated by the eyes, which send information to the regulating lobe in the brain that ensures all parts of the squid’s body respond together, just as in the case of the muscular contractions in jet propulsion. The neural control can also determine the brightness, contrast and colour of the patterns, which means that they can appear, disappear or change almost instantly, enabling a squid to shift its physical appearance continually to confront predators and prey with completely different shapes. Not only are perception and motion intertwined, but they are also connected directly with body patterning.

Loligo pealei has three colour classes of chromatophores—yellow, red and brown—with the extremes of the chromatic spectrum marked by ‘intense darkness produced by maximal expansion’ at the one end, and ‘intense brightness produced by maximal retraction’ at the other. A group of prominent biologists headed by Roger Hanlon studied the long-finned inshore squid (which they identify as Loligo pealei, but which Jereb and Roper identify as Doryteuthis pealeii) for three seasons off the southern arm of Cape Cod, and in the Marine Biological Laboratory in Woods Hole, Massachusetts, observing them specifically for changes in colour, patterns created by alternate dark and bright coloring, and body shapes assumed by positioning the arms and body. These researchers sum up their observations by stating that ‘any of the 34 chromatic components can be expressed instantly and in various combinations with the five postural and twelve locomotor components to produce each squid’s wide variety of behavior’. Examples of the components range from a ‘clear’ appearance (in which ‘all or most chromatophores’ are retracted, making a squid ‘translucent in clear water or white in murky water’) to ‘all dark’ (in which the skin takes on ‘an overall deep brown coloration’, and appears when a squid becomes alarmed). What the researchers consider to be ‘normal’, because it lies in between ‘clear’ and ‘all dark’, appears as ‘an overall amber body pattern’.

Their luminescence can be understood as light altered—digested, if you will—into intentional actions.

The researchers divide body patterns into two primary types: chronic, which lasts for minutes or hours, and acute, which lasts for a few seconds or minutes. The chronic patterns all begin from the long-lasting basic amber pattern. It should not be considered the ‘true’ colour of these squids, however, since by their nature squids move and change. Variations depart from the amber by becoming lighter all over (‘clear body pattern’), or uniformly amber along the dorsal area, while the sides become lighter (‘countershading’) to enable squids to blend in so well with the appearance of the water that even from a few yards from an observer they become invisible. There is also the intriguing ‘chronic all dark pattern’ in which an entire school of squids become consistently dark, making them stand out from their surroundings. Researchers do not understand any purpose in this shading, but have seen it repeatedly in the natural habitat when many hundreds of calm squids hover together.

The brief acute patterns squids make are innumerable. Among them, ‘very dark’ occurs either as a single brief flash or as several flashes over the span of five seconds. The brief version appears to work as a warning of some threat coming from another squid or some other species (‘a person in the laboratory’), and the longer version appears aimed at startling the other creature. Another pattern, called the ‘blanch-ink-jet maneuver’, is believed to be universal among squids. The individual blanches clear, jets away, and ejects an inky ‘pseudomorph’, or decoy, that remains in the approximate position from which the squid swam off.  This defensive action confuses an attacker that believes the ink cloud to be the squid, which has safely left the area. This ‘universal’ movement characterizes squids in a fundamental sense, by creating the ‘pseudomorphic’ decoy that remains motionless and allows the squid to escape using jet propulsion. The effectiveness of the maneuver depends on its ability to convince a predator that its prey remains still rather than moving as squids do—fast and in any direction.

The chromatophores lie over reflective cells called iridophores, which change the wavelength of light bouncing off them. As chromatophores expand and contract, they cover and uncover the underlying reflective cells without extinguishing the reflected light, giving an effect of changing colors and iridescence all at once. The colors might create patterns, while the iridescence shifts the light from non-polarized to polarized, and towards the shorter wave length of blue light. The iridophores vary in thick- ness, which also affects the wavelengths that they each reflect. Structurally, they contain stacks of protein plates interspersed by cytoplasm, and the thicker the protein stack, the more reflected light moves towards the longer wavelengths of yellow and red, while the thinner stacks reflect short wavelengths of blue light. This reflecting mechanism has been compared to the iridescent surface of soap bubbles, in that the tone and quality of the light shifts so continually that identification of a particular colour is impossible. The angle in which an individual squid is viewed also affects the reflected light, so that seen straight on, the iridophores ‘reflect red light; at oblique angles, they reflect green light and the reflected light is polarized’. It also happens that the iridophores are physiologically active, and controlled by the central nervous system, meaning that they are not passive reflecting cells – like fish scales – but that squids can control the degree of polarization achieved by the light reflected from their skin. Squids can change their colour patterns (and simple colour) and iridescence according to their judgement of how they have been perceived and how they wish to be perceived, where they are in the water, and what the quality of the water is. As if this were not enough, they may also decide to appear one way to an observer in one direction and another way to an observer on the opposite side. This ability denotes an attentiveness not just to the surrounding environment but on multiple levels and directions. Like most animals with widely spaced eyes and monocular vision, squids do not force the information from both eyes into a single image, but can maintain interactions in different directions and towards opposed ends. Squids not only perceive in order to attack, they perceive how they are being perceived, and actively change the way they can be seen.

Many cephalopods, especially those spending the daylight hours at depths of 400–1,200 m (1,350–4,000 ft), flash additional light with their photophores. On squids these appear most commonly along the underside of their body and under the eyes. The control of the photophores comes from photosensitive receptors lying close to the olfactory lobe in the brain. Two groups of receptors appear to operate: one dorsally, which scientists believe registers downwelling light, and the other ventrally, which would register the light emitted by the ventral photophores. Generally, the photophores emit a weak blue light, matching the intensity of the light filtered through the water. On the basis of this detail, scientists surmise that the photophores on the underside function to blend individuals into the downstreaming light, so that predators from below cannot see them. By turning their laboratory lights on and off, the scientists could see the countershading strategy and decided it explained the purpose of the photophores, finding in the process as well that the squids studied could change the colour of the light they emitted to match that of their surroundings.

The combination of chromatophores, iridophores and photophores (and non-ocular light perceiving organs) makes for a strongly interactive relationship with aqueous light, or rather lights, since squids engage with different types of light, and in ranges difficult for us to imagine or measure. But we can recognize that squids metabolize their aqueous environment through both water and light. Just as their squishiness, in Aristotle’s terms, could be understood as water with the agency to perceive, judge and act, so their luminescence can be understood as light altered—digested, if you will—into intentional actions. Squids engage with changing, moving light as receptors, conveyors and projectors of light. They receive it, diffract it and create it. And they do so differently in different directions, at different depths and through different means. Their movements on a daily, seasonal and ontogenetic basis all participate in the environmental movements of lights, some of which we can perceive with our non-squid eyes and instruments designed to translate polarized light (as well as the light received in the non-visual photoreceptors), and much of which we cannot. The dynamics of the squid environment involve light and water interacting, and squids participate in those dynamics by metabolizing the continual changes into motion.

Lead image: Strawberry squid live in the ocean’s “twilight zone,” at depths between 650 to 3300 feet, where sunlight does not penetrate. Credit: NOAA Fisheries