The Machiavellians of the Animal Kingdom

Want to see a power play in a group? Behold the mongoose. 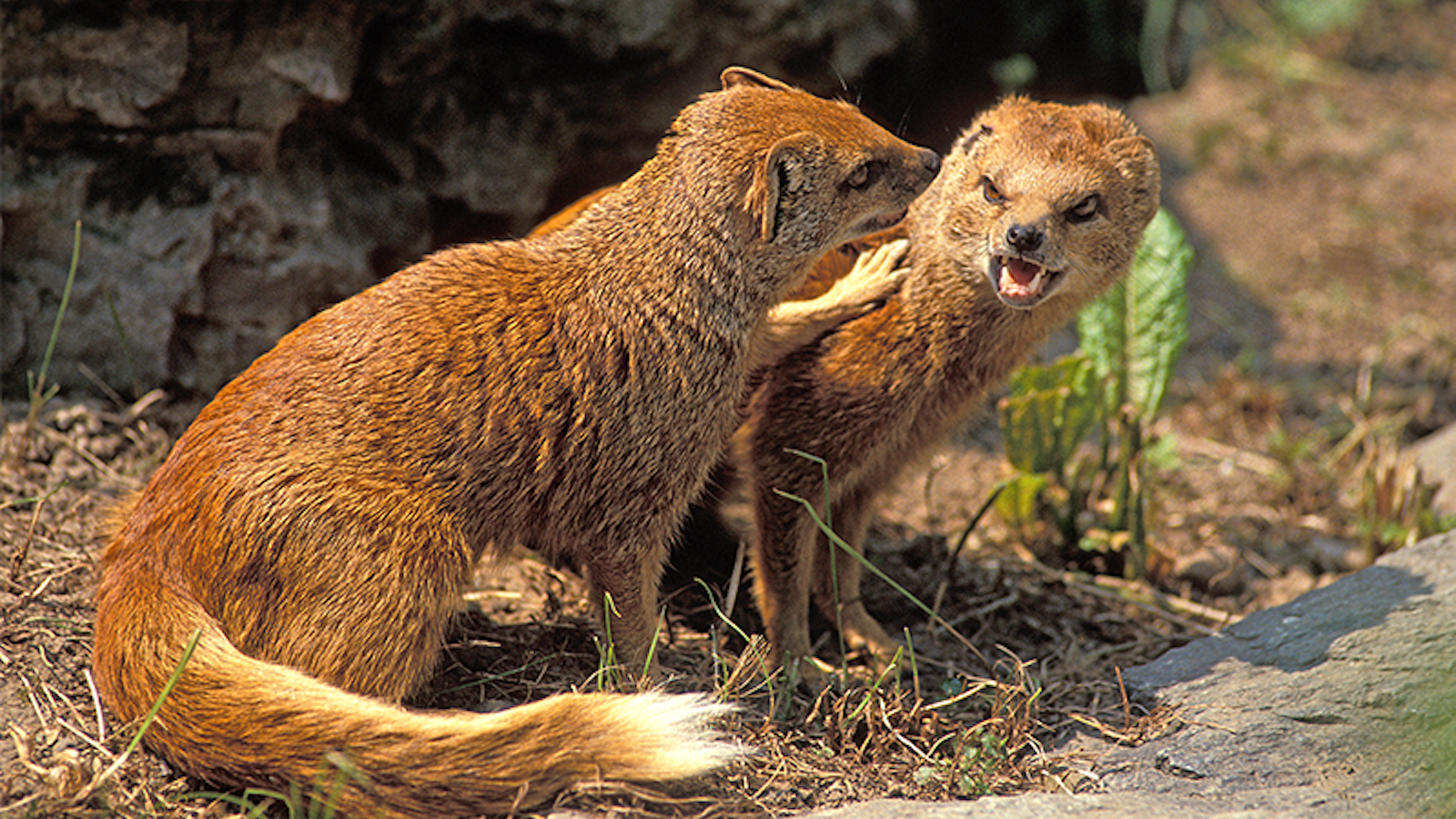 When it comes to power plays, humans are not alone. Power—or more specifically the quest to attain and maintain power—lies at the heart of almost all animal societies. The subtle, and often not-so-subtle, ways that animals seek power over those around them are astonishing and informative, both in and of themselves and because they provide an evolutionary window through which we can better understand behavioral dynamics in group-living species.

One of the most informative insights into power dynamics is seen in mongooses. Mongooses mostly live in Africa and have long and slender bodies and one fierce demeanor. They may be most famous for attacking cobras. What mongooses demonstrate to evolutionary biologists is that individuals can increase their own power via their group. Michael Cant has been studying mongooses for 25 years. With mongooses, he says, “Battle lines are not to be crossed. If they are, all hell breaks loose.”

One day you see “peace and harmony and love … and then you go back the next day and all hell has broken loose.”

Cant, a professor of evolutionary biology at the University of Exeter in England leads a team of seven Ugandan assistants, supervised by Francis Mwanguhya. The scientists study banded mongooses in Queen Elizabeth National Park in Uganda. Not only do all the team members know all the animals, but some of the banded mongooses appear to know specific members of the research team.

“There was one female,” Mwanguhya says, who “did not like one of the researchers. Every time he turned up in the group, this particular female made a grumbling noise because this researcher had captured her group and [kept] them in the lab for [many hours before] releasing them.” Mongooses can hold a grudge with the best of them: Mwanguhya was beyond surprised when, after his colleague was away for more than a year, he was greeted with the same grunts from the same female mongoose upon his return.

Cant’s early work focused on why there was high reproductive skew in groups: why a few dominant females produced young while suppressing reproduction in other females. Soon he began to learn that “mongooses are always puzzling, always surprising, they do everything wrong. They keep us scratching our heads for all sorts of reasons.”

One of those reasons is that the dominant females in a group all give birth on the same day—indeed, on the very same morning. It happens on different days in different groups, but within groups the synchrony is astonishing. “You go there, and four or five females are massively pregnant and wobbling around,” Cant says. “Then the next morning … at eleven o’clock they emerge, all slim. We still don’t know how that [synchronization] happens.”

One of the other things that had him scratching his head, and ultimately led him to study between-group power scrums, was the periodic violent eviction of a subset of females from groups that were growing quickly. One day you see “peace and harmony and love and nibbling each other’s necks, and then you go back the next day and all hell has broken loose,” Cant says. “Some individuals, for reasons we don’t know, have been labeled evictees and they just get relentlessly attacked by everyone. It is primarily females attacking females, but once an animal has been marked for eviction, even the little pups will come along and join in the kicking. There is a mob psychology to it.”

What started as an eviction had resulted in a full-fledged between-group power struggle.

As with humans, status means power. Matthew Bell, a behavioral ecologist now at the University of Edinburgh, has also studied mongooses. He has gathered data to show that high-ranking, pregnant banded mongooses tried to suppress reproduction by females lower in the power order. “The larger, more dominant, female would beat the crap out of the smaller ones. Massive disruption,” he says.

Following one mass eviction, Cant discovered, something completely unexpected happened. Ten females were evicted from a group and approached a large group composed of 20 males and eight females. That was not the unexpected part. Mongooses live in groups. And so after an eviction, the most important thing to do is to get into or form a new group. “I went there in the morning and the big group was fighting against the females,” Cant says, “driving them off.” That, too, was not so surprising. But “then I went off and got some lunch, and when I came back in the afternoon, nine males had left the [large] group, joined the females, and were now fighting against their old group.” That was surprising. What started as an eviction had resulted in a full-fledged between-group power struggle.

As memorable as that event was, Cant came to learn that it’s not the typical way in which power struggles between groups unfold. Banded mongooses breed four times a year (with January and February as their two down months), and, sans a forced eviction, individuals don’t usually disperse from groups. That leads to genetic relatedness within groups building up over generations, which, in principle, could lead to inbreeding—except that females have found a solution. They go searching for mating opportunities in neighboring groups. When they do, they are often followed by males from their own group, which has the effect of inciting fights between groups. “In the middle of the battle,” Cant says, “females go and mate with males from the other group.”

These between-group power clashes are a sight to behold. “When they are fighting, they are like single organisms,” Cant says, “writhing balls of fur with claws, and they have these battle lines they draw, chasing in and out of bushes, screaming. Sometimes you suspect that animals don’t even know if they ended up on the wrong side.” It’s such chaos that even when Cant and his whole team are there observing, they can’t tell who’s who. At the end of these clashes, which can last many minutes, there are often many casualties, including deaths, among males. Females almost always walk away unscathed—which is not to say that between-group power struggles are cost-free for females. When Cant and his team looked at pup survival rates, they found that pups at the den were less likely to survive if their group had been involved in an intergroup power struggle in the prior 30 days.

Power plays out at the group level in feral dogs in India, dolphins in Australia, capuchin monkeys in Panama, Argentine ants in California, red-tailed monkeys in Uganda. But it’s groups of power-hungry mongooses who steal the show in the animal kingdom.

Lee Alan Dugatkin is a professor of biology at the University of Louisville.  His newest book is Power in the Wild: The Subtle and Not-So-Subtle Ways Animals Strive for Control over Others (University of Chicago Press, 2022). Dr. Dugatkin is also co-author, along with Lyudmila Trut, of How to Tame a Fox and Build a Dog (University of Chicago Press, 2017) , which the New York Times Book Review called “A story that is part science, part Russian fairy tale, and part spy thriller.”