The Mathematics of Juggling

Juggling has advanced enormously in recent decades, thanks in part to the mathematical study of possible patterns. 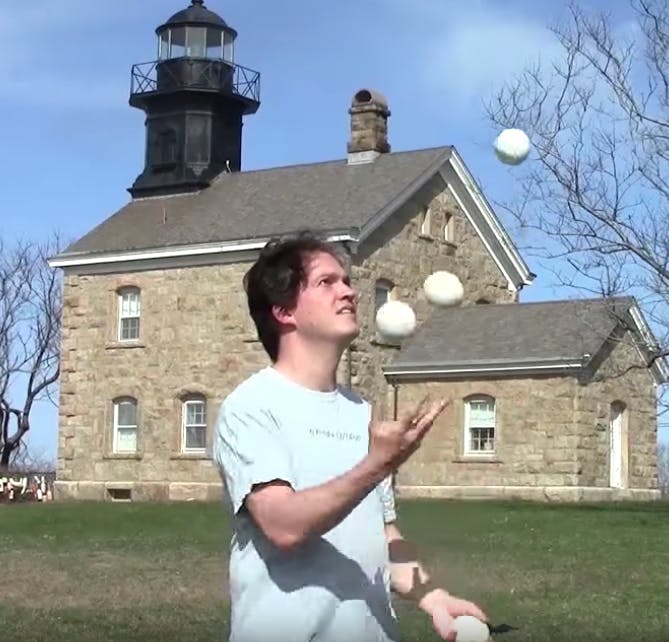 The late computer scientist Claude Shannon has a well-deserved reputation as the father of information theory, but he was also an avid unicyclist, juggler, and tinkerer. He even built his own robotic juggling machine out of parts from an Erector set, programming it to juggle three metal balls by bouncing them against a drum.

In the early 1980s, Shannon published the first formal mathematical theorem of juggling, correlating the length of time balls are in the air with how long each ball stays in the juggler’s hand. His theorem demonstrated the importance of hand speed to successful juggling.

Mathematicians have been fascinated by juggling ever since. “I think it’s a matter of making sense of the order that’s in the juggling patterns,” said Jonathan Stadler, a math professor at Capital University in Ohio who started juggling as a teenager. “It has to do with understanding how things fit together.”

In essence, juggling comes down to simple projectile motion, with each ball following a neat parabolic arc as it is tossed—except that there are multiple balls following interweaving paths in periodically repeating patterns. For a single juggler, there are three basic patterns: the cascade, in which an odd number of balls are tossed from one hand to the other; the fountain, in which an even number of balls are juggled in two separate columns; and the shower, in which all the balls are tossed in a circle. A more experienced juggler might throw more than one object from a single hand at the same time, a practice known as multiplexing.

There are many possible combinations of throws, so how do jugglers decide which ones will produce a valid pattern? They do so by means of a mathematical notation system called site swaps that links each ball thrown to how long it stays in the air, describing this in terms of “beats.”

For example, a one-beat throw means the juggler simply passes the ball from one hand to the other. If the ball is tossed into the air, the height it reaches determines how long it takes for the ball to return to the juggler’s hand—two beats, three beats, or more. The more beats, the higher the ball must be thrown to maintain the pattern. Thanks to the availability of online animation tools, a juggler can see what a given pattern will look like before attempting the trick in the physical world.

Juggling has advanced enormously in recent decades, since mathematicians began systematically investigating the possible patterns of non-colliding throws. As a result of this research, many new possibilities have been discovered for jugglers to attempt. In addition, the connections between juggling and the algebra of braids provide another way to analyze juggling. (Related: More videos from the Mathematical Impressions series.)

Editor’s note: This post was originally published on May 9, 2013.