The Multiverse Is an Ancient Idea

Turns out, we’ve been debating the notion of infinite worlds for millennia. 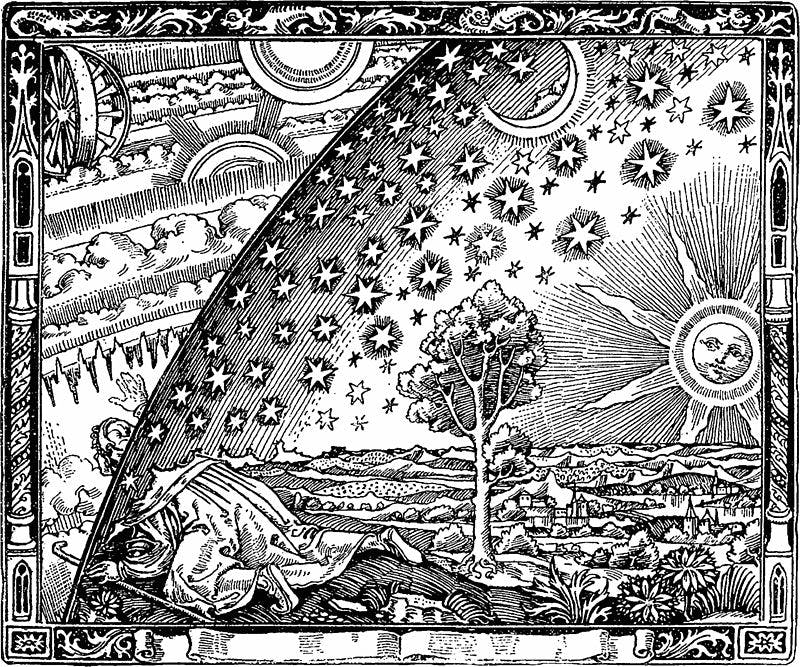 The multiverse—the idea that there are an infinite number of other universes out there besides our own—strikes many as not only odd, but also exceptionally modern, arising from contemporary physics. But in fact, the notion that there are many worlds besides ours is ancient, stretching back at least 2,500 years. Although the multiverse is never postulated as such in the writings of early thinkers, it’s an implication of efforts to solve some other problem, be it metaphysical, theological or scientific.

Here are some early precursors that may surprise you.

The earliest hints of the multiverse are found in two ancient Greek schools of thought, the Atomists and the Stoics. The Atomists, whose philosophy dates to the fifth century B.C., argued that that the order and beauty of our world was the accidental product of atoms colliding in an infinite void. The atomic collisions also give rise to an endless number of other, parallel worlds less perfect than our own.

Unlike the Atomists, who described reality without recourse to a divine being, the Stoics saw the cosmos to be imbued with an eternal, indestructible soul. But how to explain the apparent change and destruction we see? The universe recycles itself anew. According to third-century B.C. stoic philosopher Chrysippus of Soli, the world would eventually deteriorate into a sort of ethereal nothingness, but then regenerate again into material form, only for the cycle to repeat itself ad infinitum.

The Atomists held that atomic collisions give rise to an endless number of parallel worlds less perfect than our own.

Although there are sharp differences between these two Greek philosophies, their respective ideas of cyclic and parallel universes are not necessarily mutually exclusive. In another part of the ancient world, around 100 A.D., early Buddhist philosophers sought to describe a cosmology of causation, but without invoking a first cause. Their solution? Our world is one of many parallel worlds, each which undergoes its own infinite cycle of creation and destruction.

The idea of many worlds also had its ancient naysayers. And perhaps the most prominent was Aristotle. In his work, On the Heavens, he argued that the Earth was the center of the universe and all other celestial bodies—the moon, stars, and sun—rotated around it. Why? The Earth is made of the heaviest element. If there were more than one object at the center of the universe, he argued, then the element would have difficulty determining where to fall, which from Aristotle’s viewpoint was not the case. Aristotle also rejected the possibility of other worlds, because he said that space is not unlimited. Since an infinite space has no center, and the Earth acts as the center of the universe, it cannot be the case that the world is infinitely extended.

Around the turn of the first millennia, the Persian theologian al-Ghazali argued in The Incoherence of the Philosophers that the universe is contingent and does not exist by necessity. In this way, God is responsible for bringing into existence our orderly, life-conducive universe. And since God chose to actualize our world out of all of the possible worlds, we should be grateful. Some scholars today view al-Ghazali’s argument as a medieval precursor of the fine-tuning argument, where God is the justification for why the laws of physics are so perfectly tuned for life.

Shortly after al-Ghazali’s death, the Andalusian philosopher Averroes published a rebuttal to al-Ghazali aptly titled the Incoherence of Incoherence. Averroes rejects al-Ghazali’s belief that our universe is logically contingent, and instead defends the idea that the universe exists by necessity. Contrary to Al-Ghazali’s statement that God could have chosen any number of infinite worlds aside from our own, Averroes finds that all genuine possibilities that could have been realized are necessarily realized as the current world state. This isn’t to say that he believed God actualized a number of other worlds besides our own—though Averroes does open up this line of thinking, anticipating the multiverse. But rather, he concludes that God had no choice but to actualize our world, which he says is the only true possibility.

Ancient Buddhists said that our world is one of many, each undergoing its own infinite cycle of creation and destruction.

Multiverse-like ideas are also found in the treatises of medieval European philosophers. Take, for instance, English scholar Robert Grosseteste, who wrote De Luce, a mathematical treatise from 1255 that some say anticipates modern ideas like the big bang and the physics of light. In this work, he entertained the possibility that there could be other worlds out there besides our own. And even though Grosseteste denied the existence of these other worlds, his ideas created the conditions to think about them.

“The medieval multiverse was really the puzzle that Grosseteste creates,” said Richard Bower, a cosmologist at Durham University. “His solution is that ‘No, there’s only one universe but it has this extra symmetry, which is what selects the actual universe we live in from all the mathematical possibilities that are around there.’” Grosseteste’s ideas were exceptionally forward thinking—too much so for some. And the Papal Edict of 1277 banned Grosseteste’s writing and put an end to multiverse musings for the time being.

By the 16th century, however, the multiverse had made a comeback. In On the Infinite Universe and Worlds, Giordano Bruno broke with the Catholic Church’s geocentric view and wrote that the universe has no center and no circumference. He also postulated that the number of possible worlds in existence throughout the universe was infinite, and similarly, so was the number of earths and suns. Bruno also imagined the nature of these other worlds, saying there “are an infinity of worlds of the same kind as our own.” This phrase shares a flavor of understanding with some modern theories of the multiverse in which the details of the parallel worlds vary slightly, but the laws of nature remain the same.

Once again, the ideas of infinite worlds proved heretical to the Catholic Church, and in addition to banning Bruno’s works, the church also had him executed.

In his Discourse on Metaphysics, Gottfried Wilhelm Leibniz developed a notion of “possible worlds” that arose from the question of what world God would choose to bring into existence. On his view, God was restricted to consider from a supply of worlds that were not contradictory, and whose laws of physics were consistent. Although these possible worlds exist in the mind of God, Leibniz held that God’s goodness required that he only bring into physical existence the “best of all possible worlds”—our world.

Even though Grosseteste denied the existence of other worlds, he created the conditions to think about them.

Not everyone was persuaded by Leibniz’s metaphysical gymnastics. And French satirist Voltaire famously countered that crime and natural disasters were sufficient evidence that our world couldn’t be the best of all possible worlds.

Although the theories of these long-ago thinkers may seem to us arcane, and in some cases unscientific in their reliance on theology, it is striking how the idea of many worlds has been with us since almost the dawn of recorded human history. And even though we have advanced our knowledge of our place in the universe further than our ancient forebears, in some ways, we’re still tracing our forerunners’ steps down the same metaphysical rabbit holes.

Maor, E. To Infinity and Beyond: A Cultural History of the Infinite Princeton University Press, Princeton, NJ (1987)