The Mystery of Mistletoe’s Missing Genes

Mistletoes have all but shut down the powerhouses of their cells. Scientists are still trying to understand the plants’ unorthodox survival strategy. 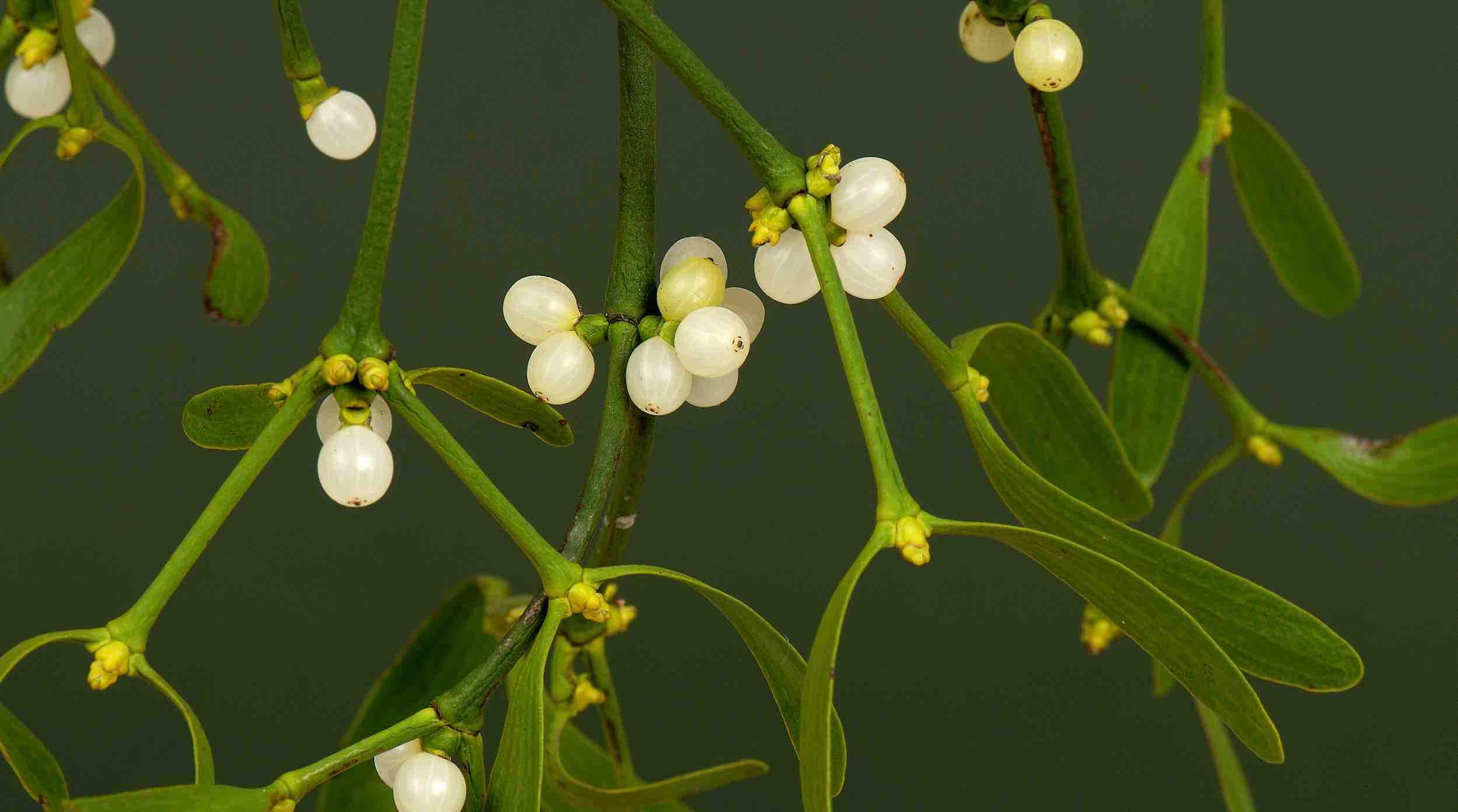 Holiday-season traditions stretching back for centuries have linked wintertime romance to decorative sprigs of mistletoe. The way that the plant’s rounded evergreen leaves and white berries tightly hug the branches of the trees on which it grows probably inspired that association. The truth about this botanical intimacy is less romantic: Mistletoe is a kind of parasite. Its leaves produce sugars by photosynthesis, but instead of roots, it has structures that pierce the host tree’s vital tissues to suck out nutrients and water.

But that interdependence goes even deeper, and scientists are just starting to realize the ways in which mistletoes are unique at the molecular level because of it. The cells of all multicellular organisms rely on the organelles called mitochondria to make their biochemical fuel—all multicellular organisms except mistletoes, that is. Not only do their mitochondria produce little if any of this fuel, they’ve lost many of the genes needed to make it. In the few years since botanists discovered this anomaly, scientists worldwide have tried with no more than limited success to figure out how mistletoes pull off this trick.

The first hint that mistletoes were truly sui generis was presented in 2015 at the International Conference for Plant Mitochondrial Biology in Wrocław, Poland, by Elizabeth Skippington, then a postdoctoral fellow in Jeffrey Palmer’s lab at Indiana University. She astounded the small scientific audience with evidence later published in Proceedings of the National Academy of Sciences that one mistletoe species (Viscum scurruloideum) had an extremely tiny mitochondrial genome and lacked key proteins thought to be required for respiration — the chemical pathway that enables mitochondria to make adenosine triphosphate (ATP), cells’ molecular fuel.

“It felt like everybody was holding their breath,” said Jennifer Senkler, a plant biochemist with Leibniz University in Germany, who attended the talk. “In the next break, everybody was chatting excitedly about this and speculating on how this could work.”

They wondered if perhaps Skippington missed the genes because they had become unrecognizable, or if there was some error in her methods. Or maybe the genes had moved into the nuclear genome—that’s something that can happen with mitochondrial genes, after all, and mistletoes’ enormous genomes (about 24 times the size of ours) have thus far impeded whole-genome sequencing. Everyone was eager to solve the mystery of the missing genes.

“We started joking about researchers falling off trees in the attempt to get their hands on mistletoe plants,” Senkler wrote in an email to Quanta. Indeed, as soon as she and her colleagues returned to Germany, “we bought a long branch cutter and started collecting mistletoes.”

They weren’t the only ones. Not far from Senkler’s lab in Hannover, at the Max Planck Institute of Molecular Plant Physiology in Potsdam-Golm, the biochemist Etienne Meyer started some investigating of his own. And at the John Innes Center in Norwich, England, Janneke Balk similarly decided to dig into mistletoe mitochondria. Balk’s team soon reached out to Meyer’s, and the two labs joined forces, though they kept running their experiments in parallel for the most part to ensure the results were replicated. “That’s what makes the story even more solid,” Meyer said.

In the end, all three research teams came to the same conclusion: Mistletoe mitochondria don’t perform the same ATP-generating process as the mitochondria of all other plants, fungi and animals. The genes Skippington spoke of are truly gone, not mutated or repositioned. And as yet, no one knows how mistletoes survive without them.

In all other multicellular life studied to date—and in most single-celled eukaryotes, for that matter—mitochondria produce ATP in a five-step process. Each step is performed by a separate suite of proteins, complexes I-V. “And one of these, the very first complex, is totally missing in mistletoes,” said Gitte Petersen, a botanist at Stockholm University in Sweden.

Trained as a plant systematist, Petersen at first thought that maybe this loss of complex I might be common. But when she and her colleagues checked nine other parasitic plant groups, the rest were normal. Something special seemingly happened in the mistletoes alone.

“In the next break, everybody was chatting excitedly about this and speculating on how this could work,” says Jennifer Senkler of Leibniz University.

As for how mistletoes compensate for the loss of these incredibly important genes, “we can only speculate,” Meyer said.

Experiments show that mistletoes make some ATP; it’s just unclear whether their mitochondria play a large part in that. Meyer and Balk’s collaboration found that the plants do produce more proteins for use in glycolysis, an inefficient method of splitting apart sugars to make ATP that’s found in all cells. However, the scientists couldn’t determine exactly how much ATP the plants generate that way.

Still, ramping up glycolysis enough to rival mitochondria’s usual ATP output would take a lot more sugar. Meyer’s hunch is that the mistletoes steal sugar from their host, along with water and minerals. They might even photosynthesize more feverishly than other plants to make extra sugars to burn, although Meyer labels that idea “extremely hypothetical.”

Mistletoes may also just use energy with Scrooge-like miserliness. Both Senkler and Petersen pointed out that a parasitic lifestyle and slow growth could enable mistletoes to subsist on low amounts of ATP. In fact, “mistletoe might teach us a lesson on how to survive at energy-limiting conditions,” Senkler said.

Too Complex to Keep?

However mistletoes get by with their deficient mitochondria, the big unanswered question is why these plants did away with something so seemingly useful.

“[M]istletoe might teach us a lesson on how to survive at energy-limiting conditions,” says Jennifer Senkler of Leibniz University.

Senkler’s suspicion is that complex I was too burdensome to keep. It consists of about 50 proteins that have to be made in different subcompartments of the cell, assembled and fit into the inner membrane of the mitochondria. The energy cost of all that is considerable, even if it means more energy in the long run, and “mistletoes seem to avoid processes that require much energy,” she said.

Ditching energy-expensive traits, or “reductive evolution,” is a common theme in parasites, Meyer noted. And losing this particular suite of proteins might have additional benefits. Because complex I spews highly reactive molecules that can cause cellular damage, losing it could make the plants more resilient to stress. Similar mitochondrial gene losses are frequently seen in cancer cells, which is partly why malignant cells can often survive conditions that other cells wouldn’t.

But Petersen isn’t convinced the loss is beneficial at all. It could be that something like a catastrophic mutation befell the mistletoes early in their group’s evolution, something that accidentally wiped out their ability to make complex I. “And then mistletoe just managed to cope with what happened,” she said, perhaps because mistletoe’s parasitic lifestyle offered ways to compensate. She is curious about whether additional genetic sequencing might let researchers suss out when the loss happened and whether the plants were already parasitic.

If it does turn out that the plants’ loss of complex I was random bad luck, then perhaps mistletoes are just like the rest of us: They’re doing whatever it takes to survive the holidays.

Lead image: During the holiday season, sprigs of mistletoe appear everywhere as traditional decorations. Scientists have recently discovered a metabolic quirk of mistletoes that sets them apart from all other multicellular life. Credit: Nigel Cattlin / Science Source