The Mystery of the Missing Sockeye 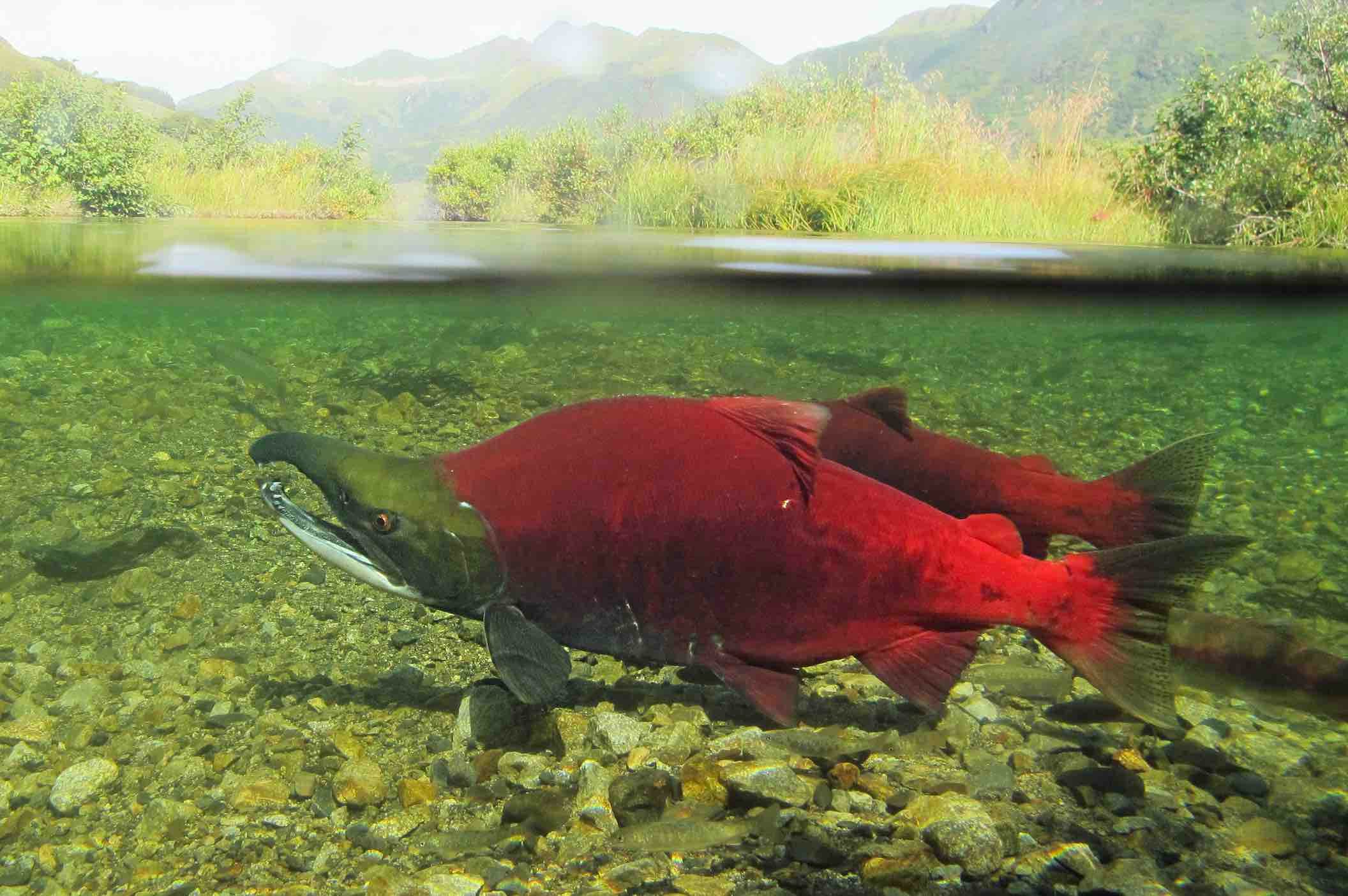 Against the backdrop of the Discovery Islands, tucked in the Inside Passage between Vancouver Island and British Columbia’s mainland, the biologists spotted a school of salmon. They maneuvered their boat to encircle the fish with a net and pulled them aboard. But something was wrong. Some fish swam strangely at the surface and rolled over. As the researchers performed quick gill biopsies before releasing the fish, some died while still in the net. Their catch was a mixture of healthy-appearing pink and coho salmon—but the juvenile sockeye salmon were long and skinny, a sign of malnourishment, some with cloudy eyes, others with their eyes popping out of their heads.

The gill biopsy samples were destined for the lab of Kristine Miller-Saunders, a biologist with Fisheries and Oceans Canada (DFO), the federal agency that oversees fishing and marine resources. As head of the Molecular Genetics Lab at DFO’s Pacific Biological station, she has directed their salmon monitoring program for ten years, studying the health of wild salmon along the entire trajectory of their lifespan from the Fraser River watershed to the coast of British Columbia.

Much of her research has focused on infectious disease threats, but as she heard the story of sockeye dying in the net, she figured it was an environmental stressor. “My first thought was that it could be a toxin response from harmful algal blooms in the area,” explained Miller-Saunders, “But we had the water tested that very day, and there were no harmful species in the surface water.”

The biologists also measured the water temperature, 60 degrees Fahrenheit, relatively balmy but probably not warm enough to cause the die-off. That left her mulling over the possibilities of a low-oxygen event, or perhaps poor adaptation to saltwater, not uncommon in juvenile sockeye salmon who have just finished a thousand-mile swim to the ocean from their rearing waters in the Fraser River. If anyone could figure it out, it was Miller-Saunders, who has spent her career developing the tools to unravel mystery diseases in salmon.

That die-off, in June of 2020, came after a series of catastrophic years for salmon in British Columbia. The summer of 2019 was the worst commercial fishing salmon season in 70 years; Unifor, the commercial fishing union, reported harvesting 629,000 total salmon worth $15 million dollars that summer, the lowest number of fish and value since 1951. And as sockeye salmon typically spend at least two years in the ocean before returning to spawn in the streams and rivers where they were born, disease among these out-migrating juvenile sockeye foreshadowed poor returns the coming years.

This is not a new problem. Populations of wild salmon in southern British Columbia began declining in the early 1980s. Following dismal returns in 2009 to the Fraser River, home to the world’s largest population of sockeye salmon, Canada established the Cohen Commission to investigate the decline of wild sockeye.

No one disputed that global warming plays a role. Salmon have definitely felt the heat, which contributes to ocean acidification and low-oxygen events that leave fish struggling to breathe. Commission members also agreed that the early marine period, when juvenile salmon first hit the ocean, is physiologically challenging, with some 90 percent dying in the first month. Miller-Saunders added a third factor: She had found genetic signatures of heightened immune system activity in returning salmon who died before spawning. Her data suggested the declines might be caused, at least in part, by viral infection.

That spurred debate. Fish raised in hatcheries or aquaculture pens are known to be at high risk for infection—the stressful conditions and close quarters fuel the spread of disease—but much less was known about how infections impacted wild salmon runs. Uncertainty also existed as to what extent infections spread from British Columbia’s coastal salmon farms to their wild brethren, and—whatever the source—whether infections were exacerbated by warming ocean temperatures.

“Wild salmon are really difficult to study,” said Miller-Saunders, “and one of the reasons is we don’t really get to observe them very well.” That’s especially so when trying to find when and where a wild fish gets sick. The early stages of infection can impact eyesight, swimming, and the ability to find food. “Fish generally drop out of the water column, largely in the mouths of predators,” said Miller-Saunders. It’s hard to solve the mystery when you can’t find the body.

It’s hard to solve the mystery when you can’t find the body.

Miller-Saunders started by developing a tool to screen salmon for multiple infections. In the spring of 2012 and again in 2013, her team conducted the first-ever survey of infectious agents in wild juvenile Sockeye salmon as they migrated to the Pacific Ocean. They tested over 2,000 fish for 46 possible pathogens, of which they found 26: a mixture of viruses, bacteria, and parasites. Some had never been seen in British Columbia’s salmon before, including a parasite, Paranucleaspora theridion, that was first observed on Atlantic salmon farms in Norway, where it was linked to high rates of mortality. Though Atlantic salmon are not native to British Columbia they are its most intensively-farmed fish and largest agricultural export.

The prevalence of disease also seemed to be increasing. Sockeye sampled in 2013 had higher infection rates and lower levels of migration success than those sampled in 2012. Meanwhile the number of infections climbed as young salmon first entered the ocean, perhaps helping to explain why 90 percent die in their first month of marine life. As they swam north to the Bering Sea, though, the prevalence of P. theridion and erythrocytic necrosis virus, which causes a severe blood disease, actually decreased. It’s unlikely they cleared the infection on their own; more likely they were dying.

Lastly, Miller-Saunders identified low levels of several infectious agents in young salmon swimming through the Strait of Georgia, between the east side of Vancouver Island and the coast of British Columbia, where the concentration of Atlantic salmon farms is especially dense. Was that a coincidence?

Complicating the picture was the fact that most fish had multiple infections. Many were likely asymptomatic and harmless, making it hard to know which diseases posed the greatest threat. To help do this, Miller-Saunders built on earlier research in human responses to infection. She identified the key proteins produced by immune response genes during an inflammatory reaction; by testing fish for those, she could reliably separate viral disease from asymptomatic infections and bacterial diseases. That helped narrow down the list of suspects.

These tools also flagged new suspects. Gideon Mordecai, a viral ecologist at the University of British Columbia who collaborates with Miller-Saunders, used her array to test farmed Atlantic salmon and found that 31 percent showed signs of active viral disease—but half of those fish failed to test positive for any of the viruses known to infect salmon. Were they dealing with a new virus?

To find out, Mordecai used a technique called meta-transcriptomic sequencing. He extracted messenger RNA—genetic material that is produced by genes and instructs cells to create proteins—from dead salmon, then weeded out whatever corresponded to known salmon genes. What remained he compared to published libraries of genetic material from viruses from around the world.  He landed three viruses not previously seen in farmed salmon in British Columbia; two were closely related to a virus commonly found in farmed Atlantic salmon in Norway.

Mordecai’s team then applied these techniques to over 6,000 wild, hatchery-raised and farmed salmon from British Columbia. They were surprised to find an arenavirus, one of a family of viruses thought to infect only mammals until recently being found in snakes and frogfish, too. One variant of the arenavirus infected only Chinook; a second had a predilection for sockeye.

Both of the arenavirus variants appeared to infect juvenile salmon in southern British Columbia as soon as they enter the ocean. The Chinook variant was more common in farmed and wild fish off the west coast of Vancouver Island; high viral loads of the sockeye variant were found east of Vancouver Island, where sockeye passed through a gauntlet of fish farms in Johnstone Strait and the Discovery Islands.

In 2012, the Cohen Commission recommended shutting down salmon farms in the Discovery Islands unless the government could demonstrate that the farms posed no more than minimal risks to Fraser River sockeye. They gave a deadline of September 30, 2020 for making that determination; on September 28, Fisheries and Oceans Canada (DFO) announced their conclusion. Despite the suggestive findings from Miller-Saunders and her collaborators, DFO said the risks were indeed minimal.

First Nations leaders and environmental groups were openly skeptical of the determination, and Miller-Saunders herself criticized DFO’s ability to remain scientifically unbiased when so much research funding comes from the aquaculture industry. In December of 2020, citing First Nations opposition, DFO reversed course and pledged to close the farms within 18 months.

Meanwhile the mystery of the dying sockeye salmon found near the Discovery Islands remains unsolved, in part because the COVID-19 pandemic forced Miller-Saunders to close her lab for six months—but infection is not the sole threat to salmon health, and it will take more than closing fish farms to restore wild salmon.

“Habitat restoration is key,” said Amy Teffer, a fisheries biologist at the University of Massachusetts Amherst. “They need clean rivers and streams to spawn in, some need lakes to rear in, they need clear paths to migrate to sea, and healthy oceans to feed and grow.” The combined effects of wetlands drainage, agricultural dikes, deforestation and development left just four percent of streams in the lower Fraser River watershed at anything close to their historical health.

Teffer’s own work involves the growing threat of climate change. To better understand the challenges faced by salmon returning to their spawning grounds, she placed wild Coho salmon in holding tanks at different temperatures.  All of the salmon did well in cooler conditions, but warming the water by 5 degrees Celsius resulted in significantly higher levels of disease and metabolic impairment. Many of the fish died, with mortality rates highest in females. When  some of the salmon were briefly netted and removed from the water to simulate the stress of catch-and-release fishing, 73 percent of females died.

Given the many factors affecting salmon, Miller-Saunders has developed a technology she calls the salmon FIT-CHIP. It’s an expanded panel of biomarkers that can can detect traces of genetic activity linked to various stresses—including extreme temperatures, changes in the salinity of water, and low oxygen—and also predict whether a fish will die in the next 72 hours. By using FIT-CHIPs to systematically sample salmon along their migration from the Fraser River watershed out to the ocean and back again, Miller-Saunders should be able to map the range of stresses affecting them and better understand how they interact.

“Our next step is really trying to get at the cumulative and synergistic effects of stress and disease,” she said. She has her eye on British Columbia’s coast, which contains both industrialized and unspoiled regions. By identifying where fish are clearly stressed, she can look for sources: Is there agricultural runoff? Oil and gas exploration? Too much tanker traffic? She might also find hotspots where habitat needs to be restored. “What among those is the most predictive,” said Miller-Saunders, “and what among those can we do something about?”