The Near-Magical Mystery of Quasiparticles

The zoo of spontaneously emerging particlelike entities known as quasiparticles has grown quickly and become more and more exotic. Here are a few of the most curious and potentially useful examples. 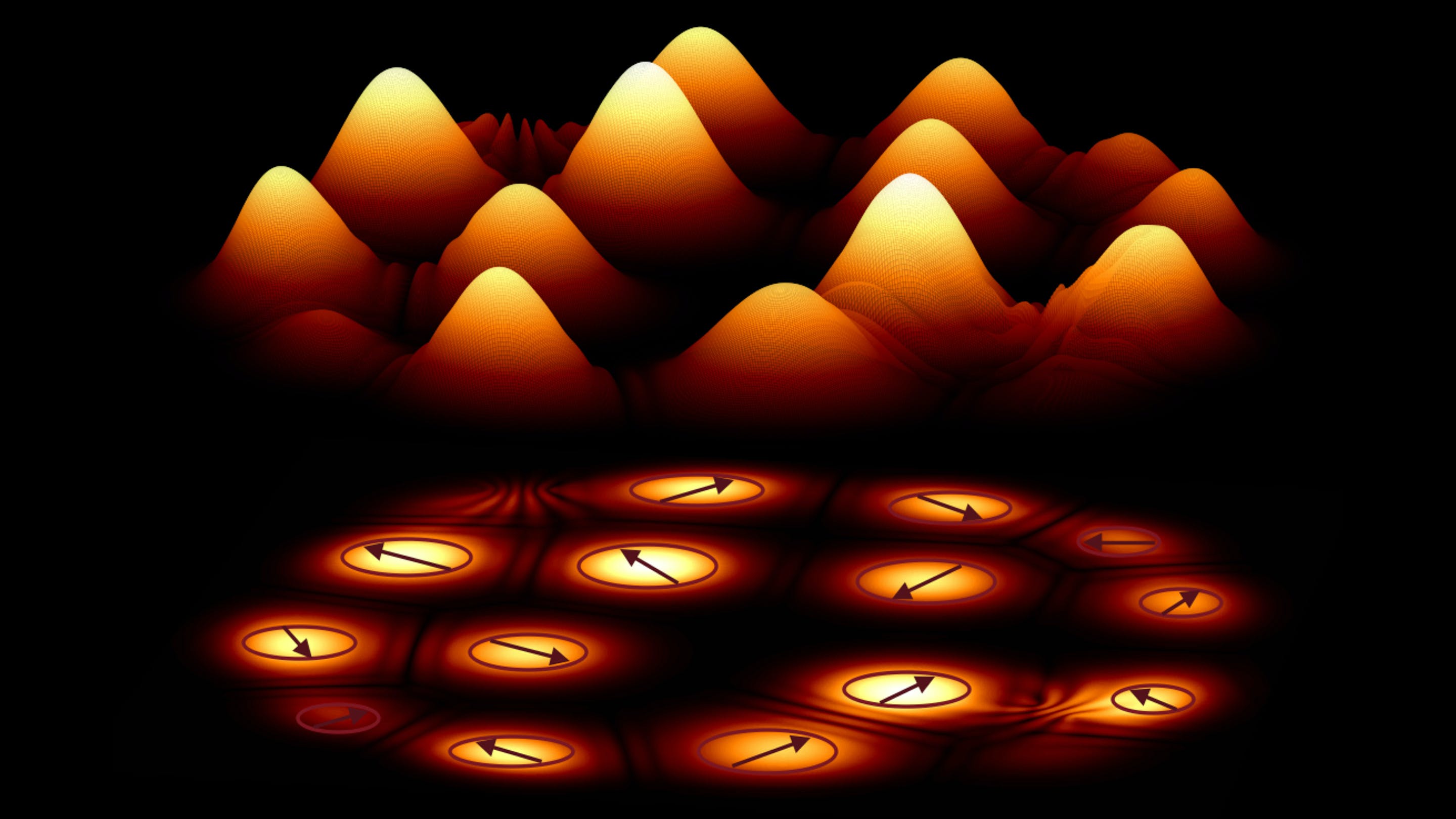 Waking up in an alternate reality, Harry Kim, an officer aboard the starship USS Voyager, creates a distortion in the space-time continuum with a beam of polarons. Sounds like science fiction? Well, yes, but only in part.

Quasiparticles are kind of particles. Barred entry from the exclusive club of 17 “fundamental” particles that are thought to be the building blocks of all material reality, quasiparticles emerge out of the complicated interactions between huge numbers of those fundamental particles. Physicists can take a solid, liquid or plasma made of a vast number of particles, subject it to extreme temperatures and pressures, and describe the resulting system as a few robust, particlelike entities. The emerging quasiparticles can be quite stable with well-defined properties like mass and charge.

Polarons, for instance, discovered by Lev Landau in 1933 and given a cameo on Star Trek: Voyager in 1995, materialize when many electrons are trapped inside a crystal. The push and pull between each electron and all the particles in its environment “dress” the electron so that it acts like a quasiparticle with a larger mass.

In other types of condensed matter that have dominated research over the last few decades, things get a whole lot weirder. Researchers can create quasiparticles that have a precise fraction of the electron’s charge or spin (a kind of intrinsic angular momentum). How these exotic properties emerge is still not understood. “It’s literally like magic,” said Sankar Das Sarma, a condensed matter physicist at the University of Maryland.

Using intuition, educated guesswork and computer simulations, condensed matter physicists have become better at figuring out which quasiparticles are theoretically possible. Meanwhile in the lab, as physicists push novel materials to new extremes, the quasiparticle zoo has grown quickly and become more and more exotic. “It really is a towering intellectual achievement,” said Natelson.

Recent discoveries include pi-tons, immovable fractons and warped wrinklons. “We now think about quasiparticles with properties that we never really dreamt of before,” said Steve Simon, a theoretical condensed matter physicist at the University of Oxford.

Here are a few of the most curious and potentially useful quasiparticles.

One of the earliest quasiparticles discovered was a “hole”: simply the absence of an electron in a place where one should exist. Physicists in the 1940s discovered that holes hop around inside solids like positively charged particles. Weirder still—and potentially very useful—are hypothesized Majorana quasiparticles, which have a split personality: They are half an electron and half a hole at the same time. “It’s such a crazy thing,” Das Sarma said.

In 2010, Das Sarma and his collaborators argued that Majorana quasiparticles could be used to create quantum computers. When you move the electron and the hole around each other, they store information, like a pattern braided into two ropes. Different twists correspond to the 1s, 0s and superpositions of 1s and 0s that are the bits of quantum computation.

Efforts to build effective quantum computers have so far stumbled because quantum superpositions of most types of particles fall apart when they get too hot or when they collide with other particles. Not so for Majorana quasiparticles. Their unusual composition endows them with zero energy and zero charge, and this theoretically allows them to exist deep inside a certain type of superconductor, a material that conducts electricity without resistance. No other particles can exist there, creating a “gap” that makes it impossible for the Majorana to decay. “The superconducting gap protects the Majorana,” said Das Sarma—at least in theory.

Since 2010, experimentalists have been racing to build actual Majorana quasiparticles from an intricate assembly of a superconductor, a nanowire and a magnetic field. In 2018, one group of researchers reported in Nature that they’d observed key signatures of Majoranas. But outside experts questioned aspects of the data analysis, and in March 2021 the paper was retracted.

It’s one thing to think up a possible quasiparticle, and another to observe it in an experiment where temperatures are close to absolute zero, samples are constructed atom by atom, and tiny impurities can derail everything.

Das Sarma is undeterred. “I guarantee you the Majorana will be seen, because its theory is pristine. This is an engineering problem; this is not a physics problem,” he said.

A Black Hole Made of Polaritons

The growing quasiparticle zoo, with its array of unusual characters, offers physicists a toolkit with which they can build analogues of other systems that are hard or impossible to access, such as black holes.

“With these analogues we want to go and probe physics that we cannot touch with our hands,” said Maxime Jacquet of the Kastler–Brossel Laboratory at Sorbonne University in Paris.

Black holes form in the cosmos wherever gravity becomes so strong that even light cannot escape. You can make a simple analogue of a black hole by pulling out the plug in your bathtub and watching water swirl down the drain: Water waves that come too close to the drain are inescapably sucked into the vortex. You can make an even better analogue—as Jacquet and his collaborators are doing—with the quasiparticles called polaritons.

Polaritons are mixtures of matter and light. Researchers use two mirrors to trap a photon inside a cage that also contains an exciton, itself a kind of quasiparticle made of an electron and a hole that orbit each other. (An exciton is distinct from a Majorana quasiparticle, which is half an electron and half a hole in the same place at the same time.) The photon bounces back and forth between the mirrors roughly a million times before it escapes, and as it bounces the photon blends with the exciton to form a polariton. Many photons and excitons are caged and combined in this way, and these polaritons behave en masse like liquid light, which is frictionless and doesn’t scatter. Researchers have engineered the flow of these polaritons to mimic how light moves around a black hole.

“No one can tell you that with astrophysics, but we can,” said Jacquet, acknowledging that it is a “leap” from these laboratory experiments to the goings-on of actual black holes.

If a quasiparticle can decay, it ultimately will decay. A magnon, for example—a quasiparticle made from bits of magnetic field in motion across a material—can decay into two other magnons so long as the energy of these products isn’t greater than the original magnon’s.

Yet quasiparticles are fairly stable, supposedly for two reasons: They emerge out of systems that are held at very low temperatures, so they possess little energy to begin with, and they only interact with each other weakly, so there are few disturbances triggering them to decay. “When there’s a lot of push and pull, the naive expectation was that decay will only happen quicker,” said Ruben Verresen, a condensed matter physicist at Harvard University.

The team then ran a computer simulation exploring the behavior of an ultra-cold magnet, and they saw magnons emerge that didn’t decay. They showed that their new understanding of strongly interacting quasiparticles could explain some puzzling features seen in magnon experiments from 2017. More than a neat theory, these everlasting magnons are realized in nature.

The findings suggest that quasiparticles can be far more robust than researchers once thought. The line between particle and quasiparticle is becoming blurred. “I don’t see a fundamental difference,” Verresen said.

“We don’t know the fundamental theory from which electrons, photons and so on actually emerge. We believe there is some unifying framework,” said Leon Balents, a theorist who researches quantum states of matter at the University of California, Santa Barbara. “The things we think of as fundamental particles probably aren’t fundamental; they’re quasiparticles of some other theory.”

Lead image: Polaritons, which are half-light, half-matter quasiparticles, emerge in a simulated lattice of particles cooled to a few degrees above absolute zero. Credit: