The Ocean Is Having Trouble Breathing

A drop in oxygen levels is putting ocean ecosystems on life support. 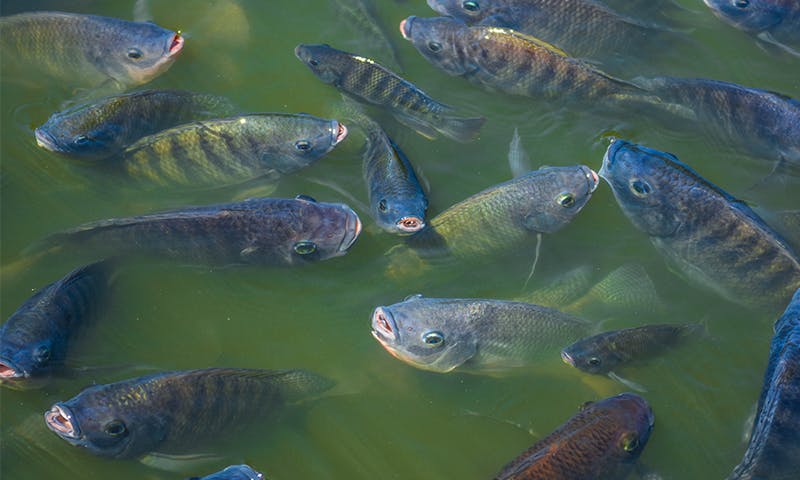 People who make their living catching fish on the open ocean first noticed the strange phenomenon a few decades ago. It occurred in the shadow zones, the spots between the great ocean currents where sea water doesn’t circulate, off the coasts of Peru, West Africa, and California. The fisher people shared the knowledge among them like a common secret, a bounty that had an even stranger explanation: Sometimes, when the conditions were right, fish would swim closer to the surface of the seas. This made them easier to catch, as the shimmering hordes pushed their way upward, where sunlight filtered through the waters and the oxygen was rich. For the fishing trawlers, this was a wild boon. For the fish, it was something else—the shadow zones, low in oxygen, were expanding, and wildlife habitats were shrinking. Swimming upward, the fish were trying to catch their breath.

It wasn’t until the late 2000s that scientists formally identified what was happening. Observing time-series data from a handful of research stations in Hawaii, Bermuda, and the North Pacific, researchers noticed that the world’s oceans had been losing oxygen, probably for half a century. The existence of these shadow zones—where ocean circulation wasn’t robust and marine life sparse, called Oxygen Minimum Zones, or OMZs—was already well documented. But scientists found that these areas were expanding; they also saw that the ocean was deoxygenating on a systematic level, affecting every area of the seas. In addition to providing places where marine wildlife can thrive, oxygen levels are a critical harbinger of the planet’s health—and unlike ocean acidification, another ecological crisis affecting the pH levels of the oceans, deoxygenation is seen as a change to which adaptation is impossible.

Scientists are looking at places where anoxia—a complete absence of oxygen—already exists.

Researchers say the world’s oceans lost 2 percent of their oxygen between 1960 and 2010, a rate that would leave the oceans entirely devoid of oxygen in just a few thousand years, making them uninhabitable to most life. The causes of this deoxygenation are myriad, but can mostly be traced back to anthropogenic climate change caused by increasing carbon dioxide in the atmosphere and related global warming trends. These carbon emissions are mostly produced by burning fossil fuels, and even if they were to stop immediately, they have already set in motion processes that will continue to affect the oceans for decades to come.1 That’s because ocean circulation, which is one of its primary mechanisms for oxygenating the deep seas, has already become sluggish due to warming, because the denser colder water sinks more readily. If carbon emissions cease, surface waters could recover quickly, but the deep oceans will remain transformed. Given what’s already been emitted, and the secondary effects on the planet, the global deep oceans are already set to lose at least 10 percent of their oxygen, which would be disastrous for species like pelagic sharks and tuna, because their high metabolism makes them intolerant of even a mild decline in oxygen.

Andreas Oschlies, a researcher at the GEOMAR Helmholtz Center for Ocean Research in Kiel, Germany, who has studied the oceans for three decades, said it is still far from clear how the oceans will change because scientific models that forecast biogeochemical changes are too optimistic about ocean deoxygenation: The changes observed in the field are twice as dramatic as scientific predictions. In other words, the oceans may be suffocating twice as fast as scientists expect. “A lot of ecosystems in the ocean depend on oxygen, and if you cannot breathe, nothing else matters,” Oschlies said. “There’s probably less flexibility to adapt than there is for ocean acidification, because animals can increase protection or make thicker shells or have some coating to fight acidification. With oxygen it’s really critical, it’s an essential element needed for respiration and there’s just no way to adapt.”

Of all the ocean’s telltale properties, its oxygen has been measured the most consistently for the longest time. In the late 19th century, in the early days of maritime research, when vessels like the HMS Challenger, sponsored by the Royal Society of London, trawled the high seas, researchers would pull up pails of water and measure its oxygen content to visualize the great churning of the oceans. The scientists on these vessels weren’t specifically interested in oxygen; they used its levels as a proxy marker to determine how the seas circulated. The amount of oxygen would tell them when the seawater last touched the atmosphere, since it’s through its surface that water takes in oxygen. Oceans also take up less oxygen from the atmosphere because oxygen is less soluble in hotter waters. At the same time, as ocean temperatures rise, the rate of respiration increases—animals and bacteria breathe faster when they are warmer—which also causes oxygen to decline, as it used more quickly by breathing creatures.

In addition to absorbing oxygen from the atmosphere, life in the ocean waters also produces oxygen in the same way that life on land does: through cellular respiration as part of photosynthesis. This process mostly unfolds in the upper layers of the ocean, where sunlight filters through and is taken up by the plant and animal life. Ocean ventilation transports this oxygen to the depths. Through this photosynthesis, the global oceans are a significant oxygen producer, but sea life uses most of the oxygen, making the process more or less neutral in terms of its impact on oxygen in the atmosphere.

Another driver of ocean deoxygenation is the excess of nutrients caused primarily by the runoff of molecules like nitrogen and phosphorous used for agriculture, what scientists call eutrophication. These nutrients cause algae growth to flare up in enormous blooms that block sunlight from entering the top layers of the ocean, killing the life that requires sunlight for cellular respiration and produces oxygen. Once these algae die, they sink to the bottom of the ocean and begin to decompose; the bacteria that contribute to the decomposition process also consume oxygen, further contributing to its overall decline.

There have been suggestions that another mass extinction event is already underway.

To understand how these processes could change the global oceans, scientists are looking at low oxygen zones, or places where anoxia—a complete absence of oxygen—already exists. Marilaure Grégoire, a member of the Modeling for Aquatic Systems research group and a scientist at the department of astrophysics, geophysics, and oceanography at the University of Liège, has studied the Black Sea, which has nearly anoxic conditions below 100 meters underneath the surface of the water.2 Because the Black Sea receives sea water from the Aegean, which is denser due to its higher salt content, the Black Sea’s lower layers don’t mix with the upper layers, causing a lack of ventilation that brings oxygen into the depths. In the absence of oxygen in the Black Sea, and similar spots in the Arabian Sea and Indian Ocean, bacteria that want to recycle organic matter have to find another way to oxidize—to exchange electrons—and so they turn to nitrate, which they transform to nitrous oxide, another greenhouse gas. When bacteria use nitrate, it is no longer there for the use of potential primary producers like plankton. If bacteria in anoxic zones run out of nitrate, they turn to iron oxide and manganese oxide, and even to sulfate, which they transform to hydrogen sulfide, a toxic gas. In the Black Sea, this toxicity takes place deep enough that it’s not dangerous to humans, but in recent years, nitrogen-fueled algae blooms off the coast of Brittany, France, have caused the deaths of up to six people who inhaled hydrogen sulfide gas, including a passing jogger and a truck driver whose job it was to remove algae.3

All the mechanisms underpinning ocean deoxygenation and its accompanying, complicated chemical processes have precipices that, when breached, can set off self-reinforcing chain events that scientists call feedback.4 In eutrophication zones, for instance, low oxygen can cause phosphorous to be released from sediment at the bottom of the ocean, which precipitates further eutrophication, a vicious cycle. Similarly, in the Baltic Sea, there has been an accumulation of phosphates in sediment from old washing powders that were regulated out of existence at least 20 years ago. This phosphate continues to be released into the water, precipitating nutrient blooms from below, which, in turn, are causing some of the same kind of eutrophication that leads to more anoxia. “Suddenly we could have these runaway feedbacks, where expanding anoxia leads to more seafloor being in contact with anoxic waters and more phosphate being released from the sediment, fertilizing the ocean, producing more organic matter, more oxygen consumption, and even further lowering oxygen concentrations,” Oschlies said.

There’s no clear solution for restoring the oceans. But, as with climate change, it appears non-negotiable that the only way to slow ocean deoxygenation is to eliminate its drivers, mainly the burning of fossil fuels that leads to increased atmospheric carbon dioxide and warming global temperatures. Other solutions have been proposed, including introducing certain kinds of micro-algae that photosynthesize, producing oxygen in surface waters, and building enormous ocean pumps that could artificially supplement the natural churning of the seas caused by temperature variations. None of these methods are proven or even all that promising, Oschlies said.

Ocean deoxygenation has been seen on the planet before. In the late Devonian period, around 360 million years ago, oceans also experienced a steep decline in their oxygen levels. “This is quite the condition of the Devonian, where the slowing of the circulation, plus an increase of organic matter discharge into the ocean, follow the emergence of anoxia in the ocean,” Grégoire said. “So today some authors say we are almost at an age of anoxia, because the conditions are quite similar to what happened in the Devonian, where the ocean is stratified, where circulation is slowing down, and you have an enrichment of organic material.”

It’s not clear exactly what caused the widespread ocean anoxia that characterized the late Devonian—global cooling and volcanism are commonly suspected culprits that could have gone hand in hand with the deoxygenation—but the result was one of the mass extinction events that transformed life on Earth. During the Late Devonian Extinction, approximately 75 percent of the planet’s species disappeared forever; it was the second of the five biotic crises over the course of Earth’s history that rapidly decimated biodiversity on the planet.

There have been suggestions that another mass extinction event is already underway, evidenced by the systematic disappearance of animals—especially large land animals—that coincides with the appearance of humans around the world. But ocean deoxygenation suggests that the factors contributing to this new mass extinction are even more complex and entangled with the complicated chemical footprints of post-industrial life. Carbon emissions aren’t just changing the cycle of the seasons and planetary temperatures, but also asphyxiating the living beings in the sea. Everywhere, habitats are shrinking, and the survivors are in flight, gasping for air.