The Ocean Is Struggling to Breathe, Too

The little-appreciated but very big problem of marine hypoxia. 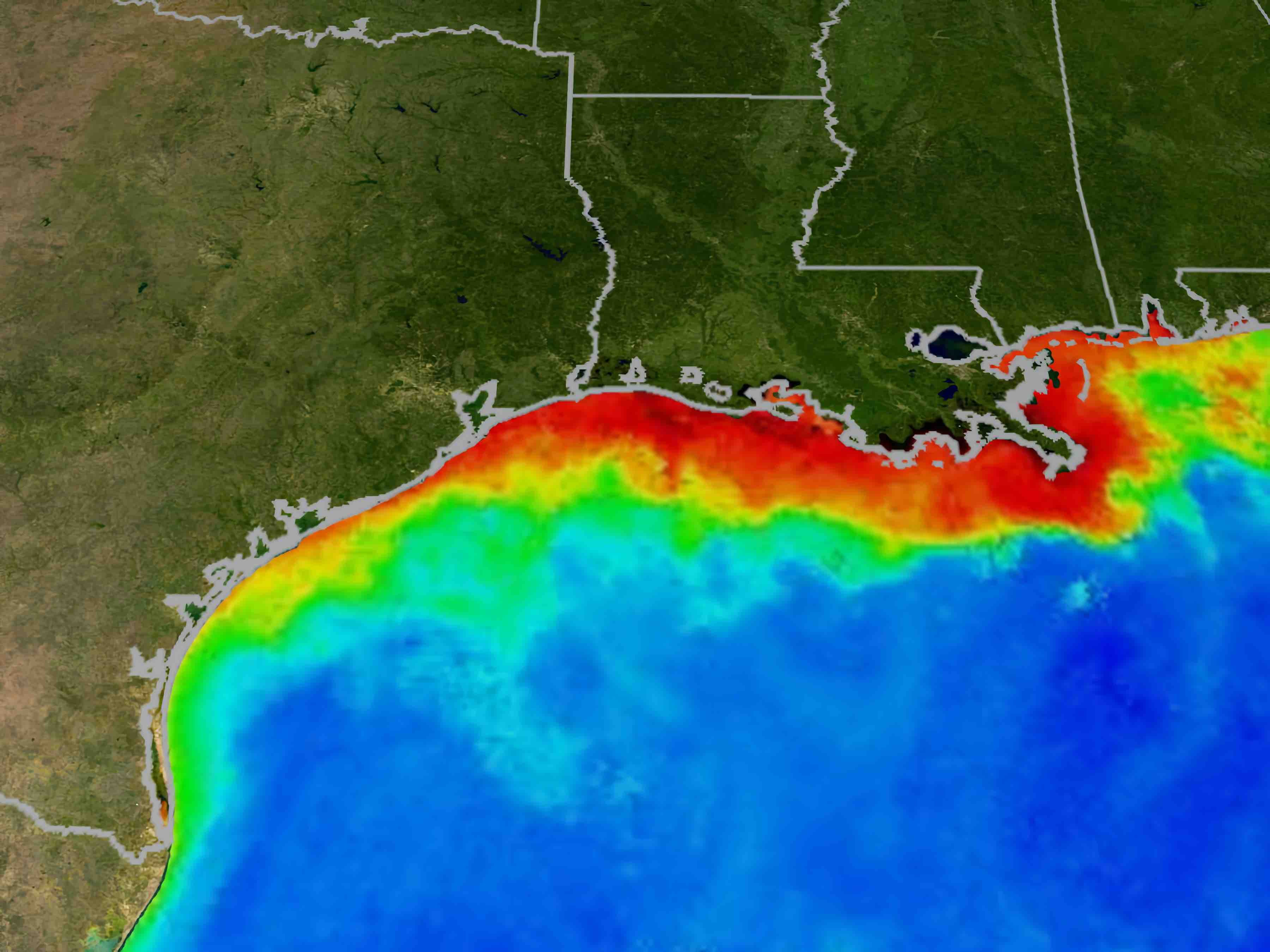 People afflicted by Covid-19, particularly those with bad cases, experience difficulty breathing.  We need oxygen in our tissues to keep our bodies working and our brains clear; viral damage to our lungs deprives bodies of this vital dissolved gas.

The causes of marine hypoxia are twofold. The first, which has been studied the most, is the too-much-of-a-good-thing problem of nutrient over-enrichment. Vast loads of nutrients are applied to farm fields as fertilizers, spill from our sewage and septic systems, and waft from the tailpipes of automobiles. Inevitably some of these make their way into water, stimulating blooms of tiny plankton that eventually die and decay. The process of decaying consumes the oxygen, and hypoxia ensues. Wastewater treatment plants have helped but are not enough. Some nutrient-loaded hypoxic waters are now-infamous “dead zones,” such as the northern Gulf of Mexico, the Chesapeake Bay, and Lake Erie most summers.

The other major cause is global warming. Warmer water can’t hold as much dissolved oxygen as colder water. It’s lighter, too, and therefore tends to float above cooler layers, cutting them off from atmospheric exchange so that they eventually become deoxygenated as well. This phenomenon isn’t directly associated with nutrient over-enrichment, but can exacerbate and intensify dead zones and impact deep ocean waters that have few nutrients. Warming is a global problem affecting the oxygen status of all waters—and it also fuels blooms of algae that die and decay, again setting off the cycle of oxygen loss.

The general public—and even many scientists—are unaware of the rapidly expanding scale of deoxygenation. Among the first researchers to describe it were marine ecologists Bob Diaz and Rutger Rosenberg, who in the 1980s began to study the impacts on bottom-dwelling organisms in estuaries and coastal seas. In 1995 they wrote, “There is no other environmental variable of such ecological importance to coastal marine ecosystems that has changed so drastically in such a short period as dissolved oxygen.”

In 2008, Diaz and Rosenberg published a landmark study in the journal Science, documenting over 400 such zones and showing that their growth was exponential. By 2019 their tally exceeded 700, and possibly as many as 1000, coastal dead zones. If we make a chart of the known history of increase and color-code it by Gross World Product, an index of global economic output, we can appreciate the linkage of these dead zones to human activity:

Deoxygenation in open oceans, away from coasts, extends farther and deeper, and is largely caused by the aforementioned tendency of warm water to seal off the cool waters below. The extent and spread of these so-called oxygen minimum zones wasn’t fully appreciated until around 15 years ago, when improved instrumentation allowed scientists to measure them. Ten years ago their total area was estimated at 8 percent of Earth’s ocean surface area—11.7 million square miles altogether, an area larger than North America and comparable in size to the entire African continent. That area is expanding today.

Brief periods of hypoxia—or even no oxygen, a phenomenon called anoxia—are common in nature and many organisms adapt by moving away or going temporarily dormant. A very few species are exceptionally tolerant and even have specialized metabolic pathways to cope in these circumstances. As the scale of deoxygenation increases, however, we see low-oxygen events so large and long that even highly mobile organisms, like fish, can’t always escape. Some may be able to survive but become so weak that they have difficulty moving and finding food, let alone digesting it. Think of the Covid-19 sufferers who are so exhausted from lack of oxygen that they can barely move. It’s the same basic issue. As scientists study the problem of marine deoxygenation, we are increasingly seeing the effects on everything from fish growth to reproductive impairment.

Although most of the studies on biotic effects of deoxygenation have taken place in laboratories, my colleague Ben Walther and I, together with our students and colleagues, have learned to decipher signs of hypoxia exposure that are “recorded” in tiny bones within fish heads, called otoliths or ear-stones. These calcium carbonate deposits grow incrementally and take up various trace elements including the element manganese, which becomes available only at very low oxygen concentrations. By studying the lifetime uptake of manganese, biologist Michele Casini and I showed that periods of intense hypoxia have profound impacts on the growth and health of Atlantic cod in the Baltic Sea. With less oxygen available, cod have less energy for foraging and fighting off parasites and infections. As a result, they are unhealthy and shrunken compared to cod living in better environments. By age three, cod with high levels of hypoxia exposure are one-third smaller than healthy cod from oxygen-rich waters. Multiply that by population size and you have an epic loss of biomass. This has direct economic consequences and likely causes enormous suffering for the fish themselves.

Deoxygenation impacts ripple through entire ecosystems, too. Recent work has shown that in large stretches of the ocean even zooplankton, the microscopic animals who feed fish, often live on the edge of metabolic collapse. A study in the eastern tropical North Pacific oxygen minimum zone found that zooplankton there migrate in and out of microhabitats with extremely low oxygen; they are among the most hypoxia-tolerant organisms, yet are already at their metabolic limits. Projected further declines in oxygen may put them over the edge, with important consequences for carbon cycling and other biogeochemical processes in the open ocean. Food webs become compromised, particularly those on sea bottoms; there are many documented cases of sensitive invertebrate communities falling victim to hypoxic events since they cannot flee. Hypoxia has even been found to cause mass mortality in coral reef ecosystems, and in some instances may play as important a role as the better-known culprit of elevated water temperatures. Even open-water ecosystems change as the volume of healthy habitat shrinks and species crowd together, leading to novel food-web interactions. Covid-19’s web of long-term complications presents an uncanny parallel.

Fortunately for humanity, a vaccine for Covid-19 should be available in 2021. The outlook for the oceans is not so optimistic, but neither is it hopeless. Think about the initial response to the virus, which was hamstrung by shortages of necessary medical supplies and technology, including masks and respirators; once the issues were recognized, it became possible to prioritize production to deal with the problem.

In the case of coastal hypoxia, nutrient pollution reductions coupled with wetland and seagrass restoration are akin to masks and respirators. They help protect the ecosystems and build up their resiliency. Those approaches resulted in greatly improved water quality and subsequent return of biodiversity in the waters off Tampa Bay, Florida, for example. And after decades of nutrient management, some parts of the Baltic Sea and Chesapeake Bay are beginning to show signs of recovery.

The looming, elephant-in-the-room challenge is to deal with global warming, which will require new economic policies at national and global scales and the commitment of governments and citizens everywhere. Although overshadowed in the news cycle by Covid-19, global warming is still on the rise, fueled by human outputs of greenhouse gases. We must bend the curve on greenhouse gas emissions, just as we must flatten the Covid-19 curve. Without such change, we are headed in a dark, scary direction where nobody really wants to go.

Lead image: Each summer an oxygen-starved zone, shown in red, forms in the Gulf of Mexico. Almost nothing can live beneath surface waters. Credit: NOAA