The Oceanic Fallout of Deep-Sea Mining 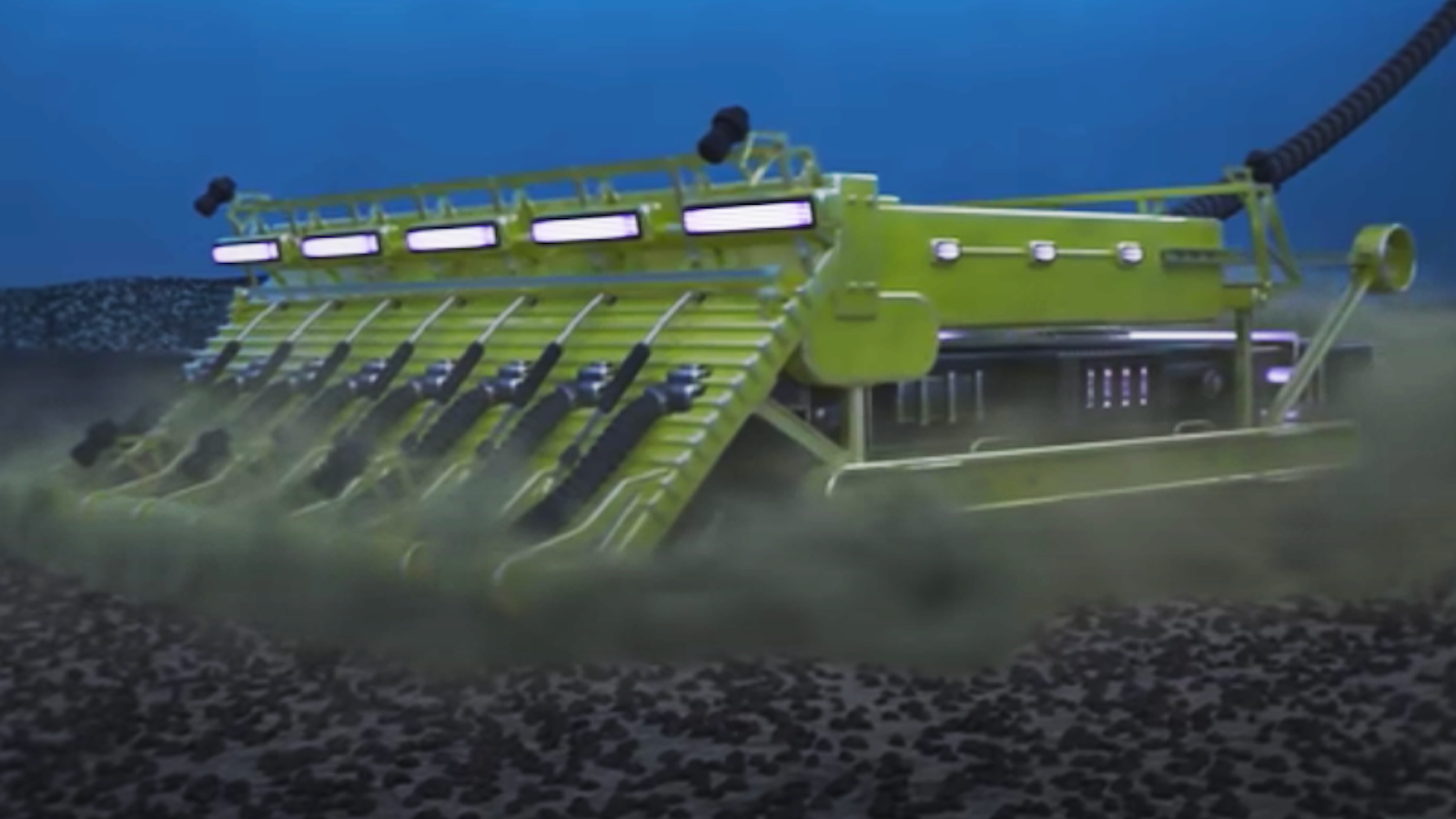 Miners have long known that the abyssal depths of the ocean floor are filled with treasure. In 1873, a British expedition dredged up several potato-sized, black lumps from the North Atlantic seabed which turned out to be full of manganese, nickel, copper, and cobalt. In addition to these nodules, which are scattered across undersea plains, later expeditions found that the seafloor’s slopes, ridges, and geysers are enriched with the same valuable metals.

Yet only recently has it become economically viable to reap these riches tens of thousands of feet beneath the ocean surface. That’s thanks to technological advances that allow industrial-scale mining at such depths, as well as the skyrocketing demand for metals to make all the solar panels, wind turbines, electric vehicles, and batteries needed to wean the world off fossil fuels.

Deep-sea mining is also presented as an alternative to environmental degradation1 and human rights abuses2 linked to terrestrial mining. In the rush to harvest these metals, nearly 600,000 square miles of the deep seafloor has already been set aside for commercial exploration, with much more expected to follow.

Nevertheless, all mining comes at an environmental cost. Though the deep seafloor was long thought to be lifeless, biologists now know that it teems with unique organisms adapted to the crushing pressure and absolute darkness. Nodule-studded plains in the Pacific Ocean, for instance, harbor vast microbe communities, countless microscopic, sediment-dwelling critters, and larger animals like sea anemones and glass sponges.3 Deep-sea octopuses lay their eggs on sponges living on the nodules that companies intend to harvest.4

The specter of destruction by deep-sea mining operations has inspired calls to restrict mining’s scale and delay its advent until consequences are better understood. Yet while much of that conversation has focused on the immediate consequences for seabed ecosystems, mining comes with a host of other, indirect impacts, many of which remain overlooked or little-examined.

Scientists suspect that the footprint of nodule mining—currently the most popular form of seabed mining—will extend well beyond the seafloor; it could even reverberate through vast swaths of the oceanic food web, affecting not only marine life but perhaps our own. And while mining companies say these risks can be mitigated, some scientists question whether it’s even possible to fully predict the far-flung effects of seabed mining, and doubt whether it’s sensible to proceed if the consequences are so poorly understood. Already, says Craig Smith, a biological oceanographer and marine ecologist at the University of Hawai’i at Manoa, “it’s really, really clear that the spatial impact of a single deep-sea mining operation will be enormous.”

Consider the cloudy plume of particles stirred up by collector vehicles as they rove across the seafloor and filter nodules from the sediment. As fine-grained sediments are thought to spread across large distances,5, 6 Smith reckons that a mining operation covering 6,000 square miles over 30 years—a scale typical for what nodule miners have in mind—could spread particles over an area five times that size. Suspended sediment may interfere with animals’ taste, smell, and vision, clog their feeding and respiratory organs, and smother seafloor life accustomed to unclouded waters.

“The bottom waters in the Clarion-Clipperton Zone,” he says, referring to a nodule-studded plain in the eastern Pacific, more than half the size of the continental United States and already apportioned among 17 mining companies, “are actually among the clearest bottom waters on the planet.”

Another major concern for Smith is noise, which will emanate not only from collector vehicles but also from riser pipes that pump ore to ships far above. He and his colleagues recently used acoustic data from dredging equipment operated in shallow waters to model the potential impacts of deep-sea mining noise; they found that mining operations will produce a zone of sound spreading outward.7 If each of those 17 companies operate a single mine in the Clarion-Clipperton Zone, the whole zone will be bathed in sound that surpasses normal noise levels. Over time the din could lead to stress and hearing loss in many species and interfere with their communication; some of the sound could enter a water layer around 3,300 feet deep that transmits sound efficiently over long distances and is used for communication by whales.

Scientists still know little about these oceanic ecosystems and how they interact with one another.

The mining operation isn’t over when the ore reaches the ship. Once nodules have been extracted, wastewater and any remaining sediment is returned to the ocean, giving rise to another expanding plume.6 According to studies by Smith’s group8 and others, the plume’s impacts depend heavily on where wastewater is discharged. Releasing it into the upper 650 feet of the ocean could cloud sunny waters and disrupt photosynthesis by algae, the foundation of oceanic food webs. Pumping it into the twilight zone, which extends to around 3,300 feet deep, could interfere with the vertical migrations of plankton, fish, squid, and other organisms who feed in surface waters at night and lurk in the depths during daytime. The plume could obscure light these creatures need to migrate and the bioluminescent signals they use to communicate, hunt, and avoid predators. Discharge may also include heavy metals leached out by broken nodules, which could subtly alter ocean chemistry and enter the deep-sea food system that nourishes some species we eat, like tuna. “Those could get into food webs that lead back to man,” Smith says.

According to Michael Clarke, environmental manager of Canada-based The Metals Company, one of the companies that already hold exploration licenses in the Clarion-Clipperton Zone, waste will be discharged below these productive ecosystems. But even a release in deeper layers could disturb life there in similar ways and—just as sediment pollution does in any part of the ocean—impair the growth of zooplankton who mistake the particles for food, notes a study9 by marine ecologist Sabine Christiansen of Germany’s Institute of Advanced Sustainability Studies and her colleagues.

Christiansen warns that scientists still know little about these oceanic ecosystems and how they interact with one another. Each glimpse into the Clarion-Clipperton Zone, for instance, reveals organisms never seen before. It’s also possible that discharging sediment into upper ocean layers could change fluxes of particles that fall to the seafloor and nourish ecosystems there, among other unexpected impacts, Christiansen says. “Maybe the idea that we can estimate or predict consequences of human interference in the deep sea is just wrong,” she says.

Disrupting seafloor life may have other far-reaching impacts. The dynamics of sediment-dwelling organisms help shape the fate of global nutrient cycles: As organic materials rain down from above, for example, some of the carbon they contain ends up buried under the sediment, creating a slow yet important pathway for planet-warming carbon to be locked away from the atmosphere. That long-term process could be perturbed by seabed mining,10 although it’s not an immediate problem as this takes place over long timescales, says Beth Orcutt, a microbial biogeochemist at the Bigelow Laboratory for Ocean Sciences.

Andrew Sweetman, a deep sea ecologist and biogeochemist at Heriot-Watt University in Scotland, is more concerned with impacts to microbes that recycle critical nutrients like nitrogen and silica. These nutrients are then carried back to the surface via deep-ocean currents over the course of hundreds of years. “This is what drives all the fisheries that you get along the western seaboard of the Americas,” Sweetman says, and the impacts would be felt by people living centuries from now.

Such long-term consequences are hard to predict and anticipate. Clarke says The Metals Company is monitoring shorter-term impacts as they commence the recently-approved first nodule mining test in the Clarion-Clipperton Zone. They will track noise levels with hydrophones placed at different depths around the mining site, and collect water samples at various depths to assess pollution. If they find elevated heavy metals or toxins, or noise that exceeds regulatory limits, the company will look into modifying their operations, Clarke says. Noisy equipment could be placed inside insulated containers; amounts of discharged sediment might be reduced. As for any unexpected ecological effects, Clarke says the company’s gradual approach to ramping up metals production will allow them to detect and find ways to avert such impacts. “There’s lots of engineering solutions to these issues,” he says.

What mining companies will be formally required to do to minimize harms depends on the International Seabed Authority (ISA), the Jamaica-based multinational agency in charge of regulating seabed mining. The ISA is currently reviewing a set of draft regulations, and noise and sediment discharge are being considered for regulation, according to a statement by the ISA. Thresholds for maximum levels of acceptable harms may be developed. “ISA attaches the highest importance to its mandate to protect the marine environment from possible impacts of deep-seabed mining,” the statement reads.

As these discussions continue, scientists have worked to communicate what is known—and not known—about the possible impacts of seabed mining to the ISA. Among them is Orcutt, who leads the Crustal Ocean Biosphere Research Accelerator, a United Nations-supported research network that studies human impacts on seafloor ecosystems. She is among 653 scientists who have called for a moratorium on deep-sea mining until the impacts are better understood.

“Making decisions about biodiversity loss, when you haven’t characterized the biodiversity or know what that biodiversity does, is pretty risky,” notes biological oceanographer Lisa Levin of the Scripps Institution of Oceanography at the University of California, San Diego.

Smith says that characterizing the impacts produced by chronic, long-term disturbances to marine life may be difficult without studying an actual mining operation. He suggests studying a single mining site for a decade or more before considering further development of nodule mining in the Clarion-Clipperton Zone. “I’m neither for nor against deep-sea mining,” he says. But “in my view, we need to have a pretty good handle on what’s going to happen on a regional scale before we allow the whole region to be mined.”

3. Amon, D.J., et al. Insights into the abundance and diversity of abyssal megafauna in a polymetallic-nodule region in the eastern Clarion-Clipperton Zone. Scientific Reports 6, 30492 (2016).