“Organoid” brain tissue models grown in a lab for two years can help scientists study a critical period of development just before and after birth. 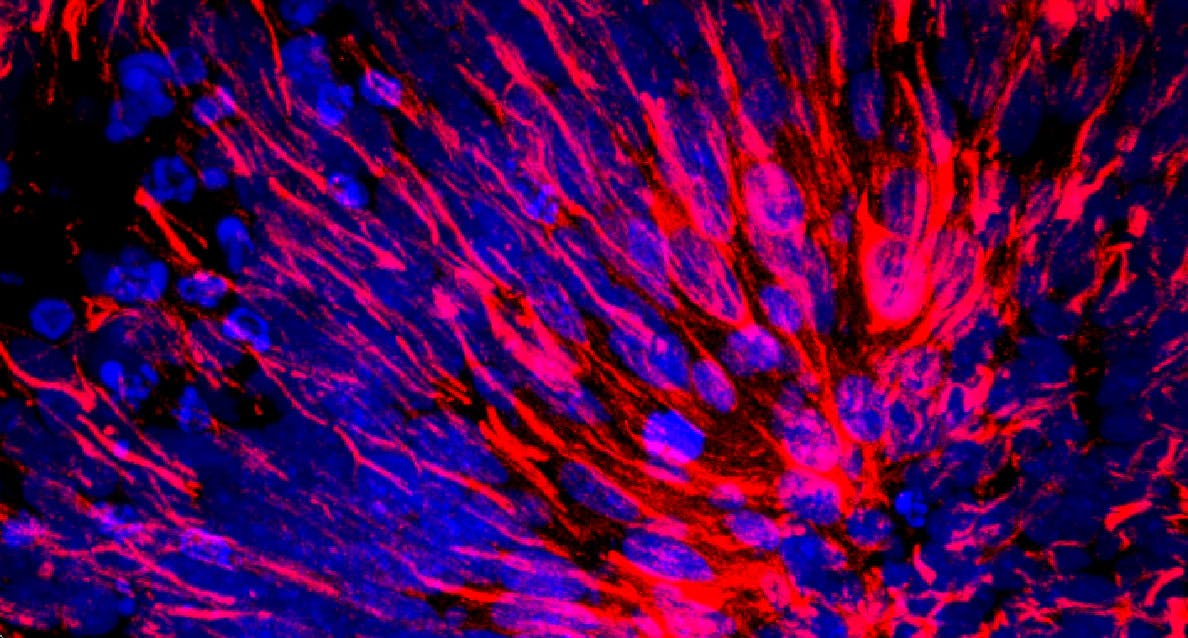 When it became possible to remove a tumor from a patient and study it in a dish, the field of oncology was transformed. Sergiu Paşca, a neuroscientist at Stanford University, wants psychiatry to experience the same kind of revolution. Yet the brain presents an even greater challenge than cancer. Without the option of simply cutting out pieces of a person’s healthy cerebral cortex the way physicians can dissect a tumor, brain scientists have had to get creative.

Now Paşca has joined other researchers in growing little balls of human brain tissue, about four millimeters in diameter, from stem cells in the lab. With prompting from the right chemicals, these cultures grow into neurons and other cell types that organize themselves over weeks and months into structures that resemble actual regions of the human brain, at least to some degree. (Qualification is necessary because these structures are missing crucial components, including blood vessels and immune cells.) Researchers are optimistic that this feat of tissue engineering will bring about a sea change in basic brain research, disease modeling and personalized medicine.

Over the past five years, scientists have worked to make these “mini-brains,” or cerebral organoids, more like the real thing. Earlier this month, for example, Quanta reported on a new method for assembling forebrain circuits that allows interneurons to migrate from one region to another, as they do in the real brain.

But most of the cultures studied to date mimic the brain only in its first trimester of development. Growing evidence suggests that processes involved in neurodevelopmental disorders such as autism and schizophrenia begin later, in the second or third trimester or even after birth. The changes in brain composition across that broad span of time can be profound at even the subcellular level, a fact that would seem to curb the research value of early fetal mini-brains.

In a study recently published in Neuron, however, Paşca and his team may have hurdled that obstacle by pushing mini-brains to unprecedented longevity. They have nurtured their cerebral organoids for nearly two years—making them some of the longest-lasting human cell cultures on record. (In an interview, Paşca added that some of the organoids persist even now, at over 850 days.) To help demonstrate the mini-brains’ worth, the scientists focused on the maturation of a type of brain cell that has largely been ignored in previous cell-culture studies because it’s slow to develop and difficult to examine.

Astrocytes are large, non-neuronal, star-shaped cells that make up much of the white matter of the brain and greatly outnumber neurons in the gray matter. Scientists have only recently started to appreciate the important jobs that astrocytes perform: They help neurons to form synapses and to prune them when no longer needed; they make connections with blood vessels; they sense trauma in the brain. But astrocytes also play a role in neurodegenerative conditions such as amyotrophic lateral sclerosis (ALS, or Lou Gehrig’s disease), and they are suspected of contributing to neurodevelopmental disorders.

A couple of years ago, Paşca teamed up with his Stanford colleague Ben Barres to see what organoids might reveal about astrocyte development. Barres’ laboratory had been studying astrocytes and other white-matter cells for many years, and Barres had recently started identifying ways in which astrocytes in the fetus differ greatly in shape and gene expression from those in the postnatal brain (he and his co-authors described those differences in Neuron in January 2016). Using techniques that Paşca had been developing to extend organoid growth, Paşca and Barres could see if older mini-brains would produce more mature astrocytes that matched the cells’ pattern of development in actual brains.

The results showed remarkable similarities. During the first five months of the organoids’ growth, the astrocytes were very active, multiplying quickly and eating away at the synaptic connections between neurons—just as they do while the fetus grows in the womb. But after nine months, the organoid astrocytes reached a more mature state, resembling what Barres had observed in postnatal brain cells. They began to express a different set of genes, and most of their activity switched to more supportive functions, such as boosting calcium signaling in nearby neurons to facilitate their maturation.

“Neurons are easy. We have protocols that can make tons of neurons from human stem cells. Astrocytes are more complicated,” said Alysson Muotri, a professor at the University of California, San Diego, who did not participate in the study. “We never knew before this study that if you wait long enough, it is possible to get mature astrocytes.”

The team’s findings open up new opportunities for studying human brain development. Not only can these organoids serve as a model for learning more about how astrocytes mature, but they could also be a good system in which to study diseases that involve both neurons and astrocytes, according to Guo-li Ming, a neuroscientist at the University of Pennsylvania’s Perelman School of Medicine who was not involved in the study.

To that end, Paşca and his colleagues are working on finding a faster way to make organoid cells mature, since maintaining uncontaminated cell cultures for two years is unsustainable in the long run. It’s also impractical for disease modeling, especially if the hope is to manipulate gene expression to reflect the specific illnesses of individual patients, with the goal of eventually growing organoids directly from their sampled cells—just as oncologists do with tumors. But despite the need for improvements, Paşca is excited about what the noninvasive, personalized nature of the organoid approach can mean for neuromedicine. “Now we can really start to ask questions about what could go awry later in fetal development to lead to psychiatric disorder,” he said.