The Problem in the Lab

A new film shines a light on the discrimination women often face in science practice. 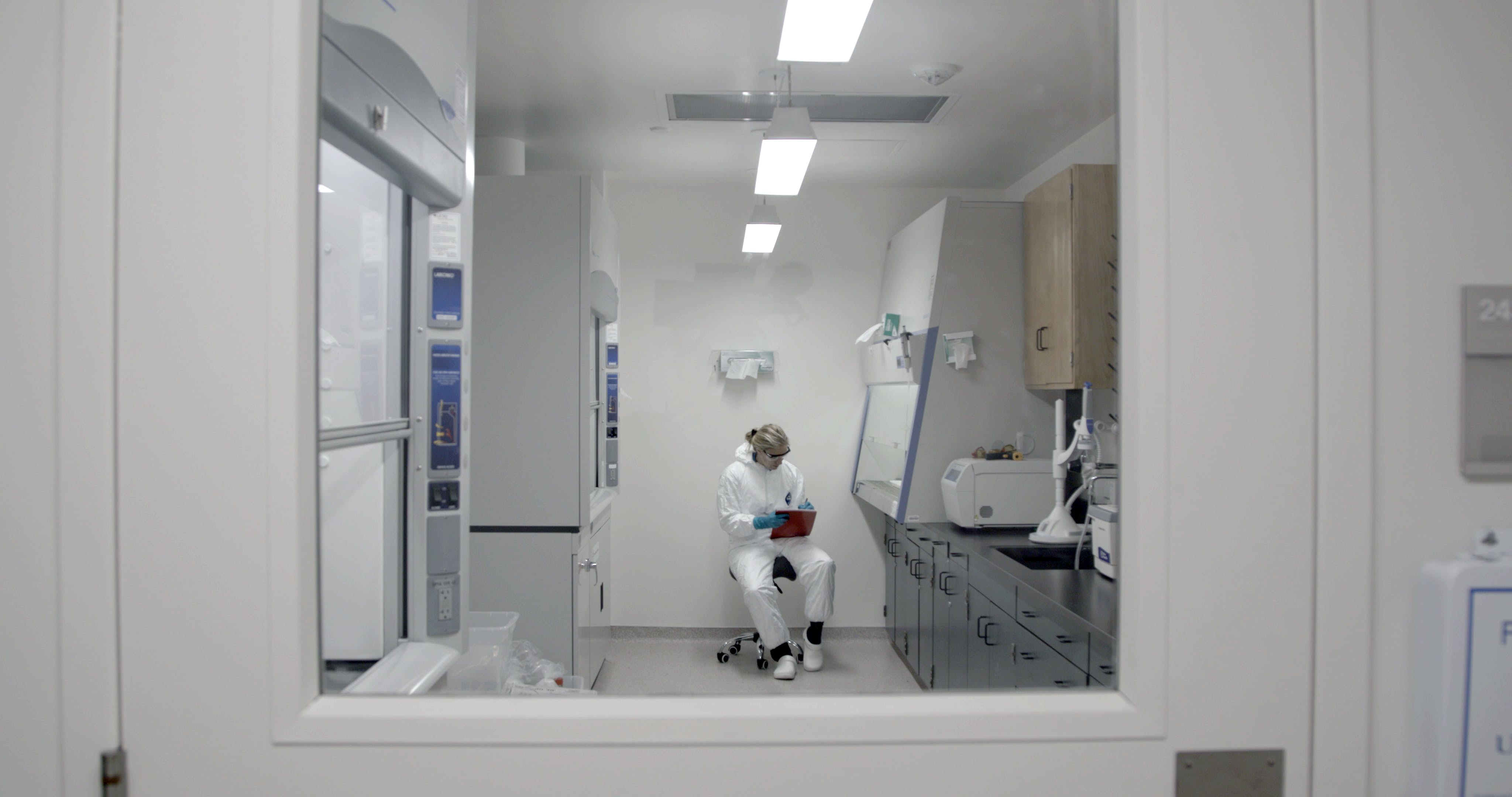 One of the most memorable images in Picture a Scientist doesn’t appear on screen. Dr. Nancy Hopkins recalls how excited she was, as a young biologist, to meet her idol Francis Crick. Not bothering with hello, Crick put his hands on her breasts and asked “what are you working on?” As many women do, Hopkins powered past the violation. Her turning point came later. A tenured faculty member at MIT, she needed more lab space for ground-breaking genetics work. But her requests were futile, even as she watched bigger spaces routinely assigned to even junior male faculty. Something of a reluctant activist, Hopkins made her case with data and mapped the lab, visualizing who had how much space.

Hopkins brought her results to the dean. “It was very scary,” she says. This was a time when no woman who took family leave received tenure. Any resistance to sexist norms earned you the label hysterical woman. “For me, it was the future of my life and science was on the balance there,” Hopkins remembered. The dean was receptive, but expressed misgivings about addressing the depths of the problem. “He said, ‘I think the problem is the nature of a very male-dominated culture.’”

The toxic destructiveness of that male-dominated culture is on full display in Picture a Scientist.  Co-directors Ian Cheney and Sharon Shattuck collaborated with producer Amy Brand to make a short film about Hopkins and the so-called “MIT Report” she instigated. “From the beginning,” Cheney says, “we sensed Nancy’s story could be a core part of a larger film. Nancy’s story had its narrative climax in the late 1990s, and that was 20 years ago. We wanted to explore how things have changed, or not, and the state of the culture for women in science today.”The documentary focuses on the heroic journeys of Hopkins and two younger scientists who attest to the generational persistence of discrimination in academia. Dr. Jane Willenbring, a geology professor at Stanford University, and Dr. Raychelle Burks, professor of analytic chemistry at American University, share stories that bely the term “bias” and might better be characterized as life-threatening. It’s heavy duty, but the film frequently cuts to charming animations that help universalize their experiences, giving the viewer space to absorb their impacts.

Like Hopkins before her, Willenbring thought her dreams had come true when she got a job assisting one of her heroes, Dr. Dave Marchant. About 17 years ago, a nascent geologist, she traveled with the storied Boston University researcher to Antarctica. The white expanse of cold soon turned into a trap door of hell. In Picture a Scientist, Willenbring tells the story of Marchant’s cruel and persistent sexual harassment, and talks about why she buried the memory for so many years.

Burks heads a chemistry group, which among other things, helps develop tests that are accessible to people across a socioeconomic spectrum. She helps empower communities to take a more active role in their well-being. She also works on detection of what she calls “the nefarious things”: explosives, and biological and chemical weapons. Her expertise is critical to helping people stay safe from harm, and yet she herself is daily exposed to micro and not-so-micro aggressions—from not getting invited to relevant meetings, to having to defend her right to faculty parking.

Raychelle, what are the daily challenges you face?

Raychelle Burks: Well, my lived experience is so weird. I’m very proud of being black, and I’m also always terrified. Because when I go outside, I may not get to where I’m going safely, unharmed; I can’t take it for granted that I am just able to live, without being stopped by police or a stranger. It’s a terrible dichotomy. There’s a talk that parents give black children: You’re going to have to protect your dignity and your safety, your humanity, but it won’t always work. Your compliance may not be enough—sometimes people just want you dead.

That is not only horrific, it sounds exhausting.

RB: Oh yes, there’s so much extra work you have to do when you’re a woman and when you’re black. Think of Nancy Hopkins having to crawl around on the floors after hours to document what should have been given to her freely. That’s on top of running a world class lab, publishing papers, supervising students.

You use a term I’ve never heard before, something Dr. Moya Bailey calls “misogynoir.”

Speaking of hellscapes, Jane, you were isolated in Antarctica and persecuted by Dave Marchant, a man you wanted to trust. How did that unfold?

Jane Willenbring: It’s like the story of a frog in a pot of water on a stove, and slowly the water gets warmer, then hotter, and the frog boils. If someone had plunked me down into the worst of it when I arrived in Boston from South Dakota, I would have seen how crazy it was and left. It takes a lot of time to get to Antarctica—you have to fly and then travel by boat, and the farther away from the norms of civilization we got, the worse his behavior became. First I thought, “Oh this is odd; he’s so interested in my sex life,” and then he’s calling me foul names and the situation progressed into a normalization of things that don’t belong in a professional environment. When I read about how Jeffrey Epstein groomed young people into accepting the unacceptable, I recognized that process.

You filed a Title 9 complaint many years after the offenses, prompted by your young daughter.

JW: Yes, she was 3, and I brought her to my lab for a “take your children to work” day. She said “Mommy, I want to be a scientist!” and I started to cry. I couldn’t stand the idea of her being treated the way I had been treated. I filed the complaint that night, and the story was eventually covered in Science.

Marchant was notorious, yet he managed to keep his job and his prestige for many years.

JW:  Yes, people have this idea that they will do something about abuse, that it’s terrible, but in practice, when you find out you have to fire someone who has been a colleague for years, it’s almost impossible for people to do.

Picture A Scientist not only has riveting testimony from both of you and Nancy Hopkins, it also features Harvard psychology professor Dr. Mahzarin Banaji. Banaji establishes that even the most enlightened of us operate with entrenched biases and see women in confining ways. Are we all frogs stuck on the stove?

JW: No. The film features the president of Boston University as a heroic character, which he was—Marchant would have gotten off scot free if not for him. But this is not the only way the pattern of abuse in academia can change. Individuals can have an impact. We can change culture using carrots, not sticks. What does it do for your institution if everyone is respected? Universities shouldn’t confine verboten behavior to “sexual” harassment—no harassment should be tolerated.

RB: With racial discrimination, there’s this expectation that the oppressed will fix this. “Hey, here you are, a black person on our faculty, I guess we’re done now.” This massive, systemic issue which is not their area of expertise—I’m a chemist! But it’s frequently on us to do even more work, to be representative, to somehow speak for all black people. I’m an academic and I defer to my colleagues across the quad, working in reconciliation and restorative justice, in black and feminist studies, in organizational psychology. The STEM folks are usually not in the same place on campus as the humanities folks, but we need to get together on this. We need to acknowledge experiences and be honest about what has occurred.

How do we move forward from here, take steps toward a better future?

JW: One thing that’s great about making it through and being on the other side of this is getting to work on these issues to help other people experiencing them. I’m a facilitator for the Advance Geo Grant—we go to conferences and universities and do training and workshops on how to be a better bystander, and how to facilitate a field environment where everyone feels supported and valued. I listen to students and I advocate for them. So we can find solutions and not have to depend on the president of a university being a good guy.

RB: I’m a chemistry professor. I consider it part of my job to train new chemists, to model professionalism, and to be a good program manager. I practice self-reflection, self-education, and self-management—as my mom would say, I get my own house in order. I love chemistry.

Picture A Scientist isn’t currently available to the public for streaming, but plans are in the works and will be announced soon—people can sign up for an e-newsletter at the film website in the meantime. Community screenings are also available. Anyone interested in having their institution, organization, or company host a screening can sign up at pictureascientist.com (under “Host a Screening”).