The Search for Dark Matter Is Dramatically Expanding 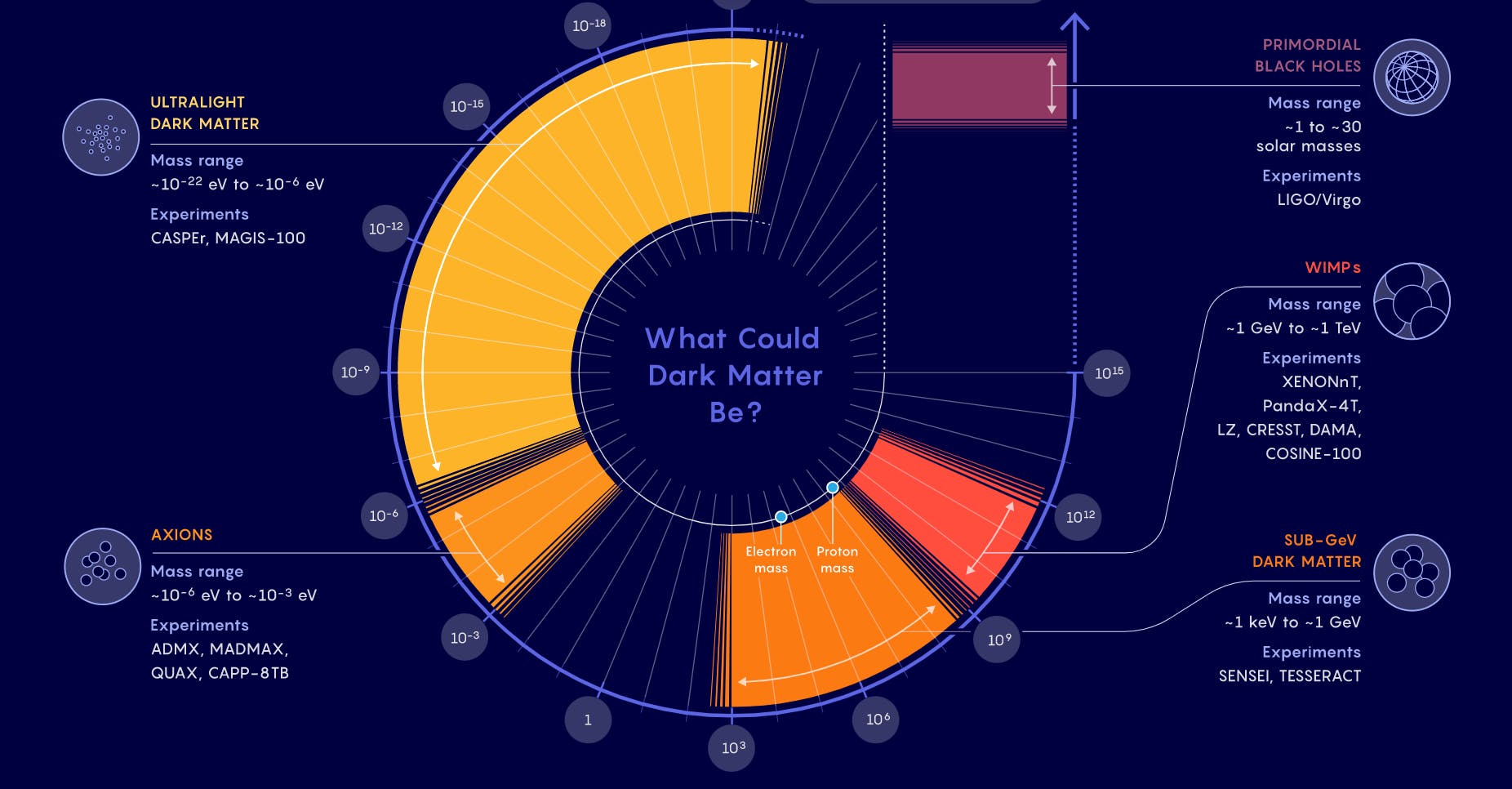 Ever since astronomers reached a consensus in the 1980s that most of the mass in the universe is invisible—that “dark matter” must glue galaxies together and gravitationally sculpt the cosmos as a whole—experimentalists have hunted for the nonluminous particles.

They first set out in pursuit of a heavy, sluggish form of dark matter called a weakly interacting massive particle, or WIMP—the early favorite candidate for the cosmos’s missing matter because it could solve another, unrelated puzzle in particle physics. Over the decades, teams of physicists set up ever larger targets, in the form of huge crystals and multi-ton vats of exotic liquids, hoping to catch the rare jiggle of an atom when a WIMP banged into it.

But these detectors have stayed quiet, and physicists are increasingly contemplating a broader spectrum of possibilities. On the heavy end, they say the universe’s invisible matter could clump into black holes as heavy as stars. At the other extreme, dark matter could spread out in a fine mist of particles thousands of trillions of trillions of times lighter than electrons.

With new hypotheses come new detection methods. Kathryn Zurek, a theoretical physicist at the California Institute of Technology, said that if current WIMP experiments don’t see anything, “then I think there’s going to be a substantial part of the field that’s going to shift into these new kinds of experiments.”

Already, the work has begun. Here are a few of the many new fronts in the search for dark matter.

Between an Electron and a Proton

WIMPs would have enough heft to occasionally bowl over a whole atom. But in case dark matter is lighter, some experimentalists are setting up smaller bowling pins.

A gentler rain of dark matter particles weighing less than protons could occasionally knock electrons free from their host atoms. The first experiment designed specifically to pick up this dark matter is the Sub-Electron-Noise Skipper CCD Experimental Instrument (Sensei), which uses technology similar to that of digital cameras to amplify signals from unexpectedly emancipated electrons inside materials.

When a Sensei prototype switched on with just one-tenth of a gram of silicon, it didn’t find dark matter. Even so, the team’s results, published in 2018, instantly ruled out certain models.

“We just turned on and we had the world’s best limits,” said Tien-Tien Yu, a physicist at the University of Oregon and a Sensei collaboration member, “because there were no limits before.”

Results from 2020 research of a 2-gram version of Sensei extend those limits, and now Yu and her colleagues are preparing to deploy a 10-gram version in an underground laboratory in Canada, away from interfering cosmic rays. Other groups are designing alternative low-cost experiments targeting the same low-hanging fruit.

If dark matter is lighter still, or blind to electric charge, it might fail to unleash an electron. Zurek has brainstormed ways that even these pipsqueaks could betray their presence by influencing the behavior of groups of particles.

Imagine a block of silicon, for example, as a mattress with springs representing atomic nuclei. Bounce a quarter off the mattress, Zurek says, and while no single spring will move much, the coin could set off a ripple that passes through many springs. She proposed in 2017 that an analogous disturbance from a dark matter interaction might generate sound waves that could slightly warm the system.

“Anything can be a dark matter detector. You just have to be creative enough to think of how to use it,” said Rebecca Leane.

One project taking this route, Tesseract, is currently running in a basement at the University of California, Berkeley, looking for ripples from dark particles similar in heft to those that Sensei targets. Sensitive future upgrades, however, could theoretically find particles up to a thousand times lighter.

But there are even more lilliputian particle possibilities. The axion—an entity so slight it’s more wave than particle—could comprise dark matter and simultaneously solve a mystery about the strong nuclear force. The Axion Dark Matter Experiment (ADMX) recently began scanning for axions decaying into pairs of photons inside a mighty magnetic field, and several similar searches are starting up.

Some experiments are aiming for even lighter stuff. The lightest that dark matter could possibly be is about one-thousandth of a trillionth of a trillionth of the electron’s mass—which would result in a particle that’s like an extremely low-energy wave, with a wavelength the size of a small galaxy. Lighter (and therefore longer) entities would be too diffuse to explain why galaxies stick together.

While experimentalists prepare the next generation of apparatuses seeking direct contact with dark matter, others plan to scour the heavens for indirect signposts.

Enormous clouds of dark matter are thought to create galaxies and stars by gravitationally drawing in visible matter. But any smaller dark matter clusters that might exist wouldn’t do this. These modest blobs would be completely dark, but they should still gravitationally bend passing starlight. One group of researchers is searching for this “lensing” of starlight by dark matter blobs in data from the ongoing GAIA survey.

“Dark structures are moving throughout our galaxy,” said Anna-Maria Taki, a physicist from the University of Oregon and a member of the team. “As they move, they distort the positions and the proper motions and trajectories of luminous sources.”

Preliminary results published in September 2020 did not locate any such structures heavier than about 100 million suns. With larger future data sets, the researchers hope to discern the possible outlines of wispier dark clouds. From the shapes and sizes of these hypothetical structures, the scientists could infer whether, and in what manner, dark matter particles interact with themselves.

Other researchers have come up with a way to harness the quickly growing catalog of exoplanets. “We have billions of these things just sitting out there,” said Rebecca Leane, a particle physicist at the SLAC National Accelerator Laboratory and co-author of a proposal from September 2020.

The idea is that a planet may collect dark matter in its core as it sweeps through the Milky Way. As those dark matter particles annihilate with their antiparticles, they heat up the planet. Exoplanets closer to the galactic center pass through denser dark matter, so they should glow hotter with infrared light. If the upcoming James Webb Space Telescope can take the temperature of a few thousand exoplanets, Leane and a colleague calculated, that data set could bear the fingerprints of annihilating dark particles in the electron-to-proton mass range.

WIMPS may be down, but they’re not out. A nearly 4-ton tank of xenon will start a two-year run in March of 2020 at the Gran Sasso National Laboratory in Italy. And a team in South Korea, the Cosine-100 collaboration, seeks to check a controversial claim from another Gran Sasso experiment called DAMA. In that experiment, an array of sodium iodide crystals has logged exactly the kind of seasonal variations one might expect if Earth is presenting different faces to the “wind” of dark matter it passes through. “They have an annual modulation, no ifs, ands or buts. But what is it?” said Katherine Freese, an astrophysicist at the University of Texas, Austin. “We can’t figure it out.”

Freese, whose calculations helped launch the era of WIMP experiments, has new ideas for tracking down the particles too. In 2018 she suggested that WIMPs might have burrowed into rocks buried miles underground, and she recently signed on to a proposal to go dig them up.

Many physicists expect dark matter to be as omnipresent as it is aloof. If they can come up with enough ways to sense the invisible—like checking whether it tickles different types of detectors, or whether it nudges starlight, warms planetary cores or even lodges in rocks—its ghostly influence could show up anywhere.

“Anything can be a dark matter detector,” Leane said. “You just have to be creative enough to think of how to use it.”

Lead image: Dark matter could be made up of particles with a vast range of possible masses. Credit: Samuel Velasco/Quanta Magazine