The Supervolcano Under Yellowstone Is Alive and Kicking

Around 10,000 geothermal features in Yellowstone hint at a mysterious hot spot beneath the crust. 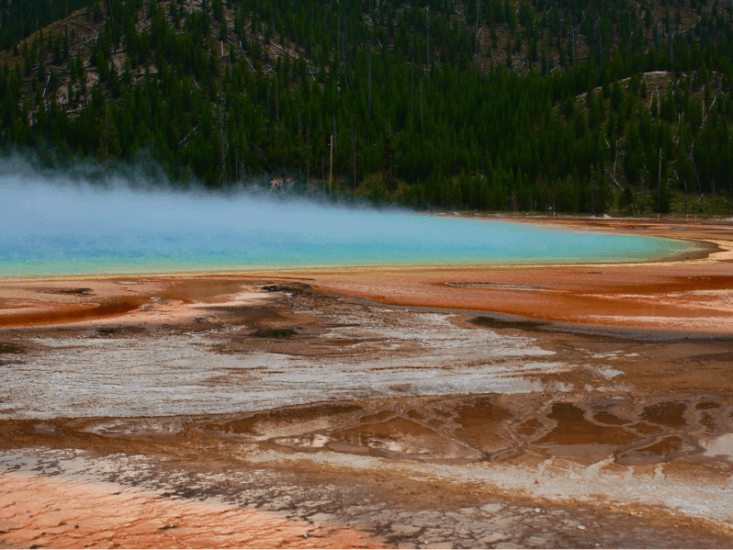 The wind shifts. The stench of rotten eggs makes it nearly impossible to breathe and the hot fog clouds my view. I hold my breath and close my eyes, imagining the fog growing thicker, crushing me. Then without warning the wind clears and I’m enveloped once again in the cold, dry air. The heat feels like a lost dream. I shiver as I analyze my surroundings.

Before me lies a steaming blue spring with concentric rings of green, yellow and dark red. I turn around to see another pool. But the rising fog is so dense, I can only guess at the existence of blue water below. Sometimes I glimpse bubbles boiling from some unknown source. The pools are a small sampling of the 10,000 geothermal features that dot Yellowstone’s caldera and hint at a mysterious hot spot beneath the crust.

It’s this alien landscape that makes it surprisingly easy to believe that northwestern Wyoming sits directly above a supervolcano—a behemoth far more powerful than your average volcano, with the capacity to eject more than 240 cubic miles of material.

But why do scientists believe there is a supervolcano hidden below? When I asked Henry Heasler, a park geologist at Yellowstone this question, he waxed philosophical. “Good science is nothing more than a progress report,” he said. “It’s what we know at a certain time with the data that we have.”

Scientists provided one of the most impressive progress reports yet: They peered deep beneath the Earth’s surface and created the first three-dimensional image of the supervolcano’s plumbing. Although they had already imaged a plume, which brings molten rock up from deep below the mantle to a region about 60 kilometers below the surface, and a magma chamber about 10 kilometers below the surface, the new work had found the missing link between the two.

A second, 11,200-cubic-mile magma chamber connects the plume to the shallower magma chamber. It’s 4.5 times larger than its shallow companion and has enough hot rock to fill the Grand Canyon nearly 14 times.

Hsin-Hua Huang, a seismologist from the University of Utah and his colleagues used earthquake data to capture this astonishing image. It’s similar to an ultrasound, said Heasler. “We have the skin of a surface—of a person—but we want to see what’s inside.” When earthquakes travel through dense, hot spots they slow down. So if a seismic wave reaches a sensor later than expected, scientists know there’s a low-velocity, and hence denser and hotter, region hidden deep within the Earth.

“If we were just using one pathway—so one earthquake and one seismometer—we couldn’t be able to tell where along that path that low velocity body was. We’d have no idea,” said co-author Jamie Farrell from the University of Utah. That’s where multiple earthquakes and sensors come into play. Huang’s team used 4,849 earthquakes, originating from all parts of the earth, plus 80 seismographs across Yellowstone and beyond, to create a rough three-dimensional picture.

But seismic tomography isn’t the only way to peer deep underground. GPS satellites can scour the area searching for any ground movement; gravity satellites can look for any changes in the density below; and ground instruments can sample the heat and gases rising from the geothermal features.

All methods point to a supervolcano that’s very much alive. From 1976 to 1984, GPS satellite data showed that the caldera floor was swelling upwardgravity data. To a satellite orbiting directly above the inflow, the Earth will seem to pull on it a little less than expected. Meanwhile ground instruments measured increasing heat and gases rising from the active features.

Then from 1985 to 1995 the caldera sunk back down about 5.5 inches. Magma was either moving out of the system laterally or the shallow reservoir was simply cooling and contracting, letting gases seep through the surface. Later measurements show that the caldera floor is continuing to swell and sink. But scientists still don’t understand the complex interplay between the supervolcano’s moving parts.

“I think our next step—hopefully—is to be able to look at some smaller scale features of how these bigger features are connected to each other,” said Farrell. If scientists can determine how the large magma chambers interact with each other, they will better understand how fluids and heat move the Earth. “Then we can start looking at how long it would take for enough material to get from the deep to the shallow [reservoirs] and maybe where we are in the volcanic cycle of eruptions. But we’re not quite there yet.”

Although past eruptions dot the Earth’s surface from Oregon to Wyoming, it’s hard to infer anything about a future eruption. And Farrell isn’t convinced another super-eruption will happen at all. “The system might be dying,” he said. “The Yellowstone hot spot is moving into thicker, colder continental crust. And it takes a lot more energy to burn through that crust than it did the thinner crust that it’s been burning through for the last 17 million years.”

But as I watch Yellowstone’s surface boil over before my very eyes it’s hard to believe that the system deep beneath my feet might one day fade away. And as a geyser before me erupts, shooting steam and water tens of feet into the air, I have to wonder if it’s instead slowly building toward another super-eruption. After all, despite Farrell’s uncertainty, he continued to say: “It’s happened in the past, it could happen in the future.”

This article was originally published in Nautilus Magazine’s blog, Facts So Romantic on July 26, 2017.