The Trouble With “The Big Bang”

A rash of recent articles illustrates a longstanding confusion over the famous term. 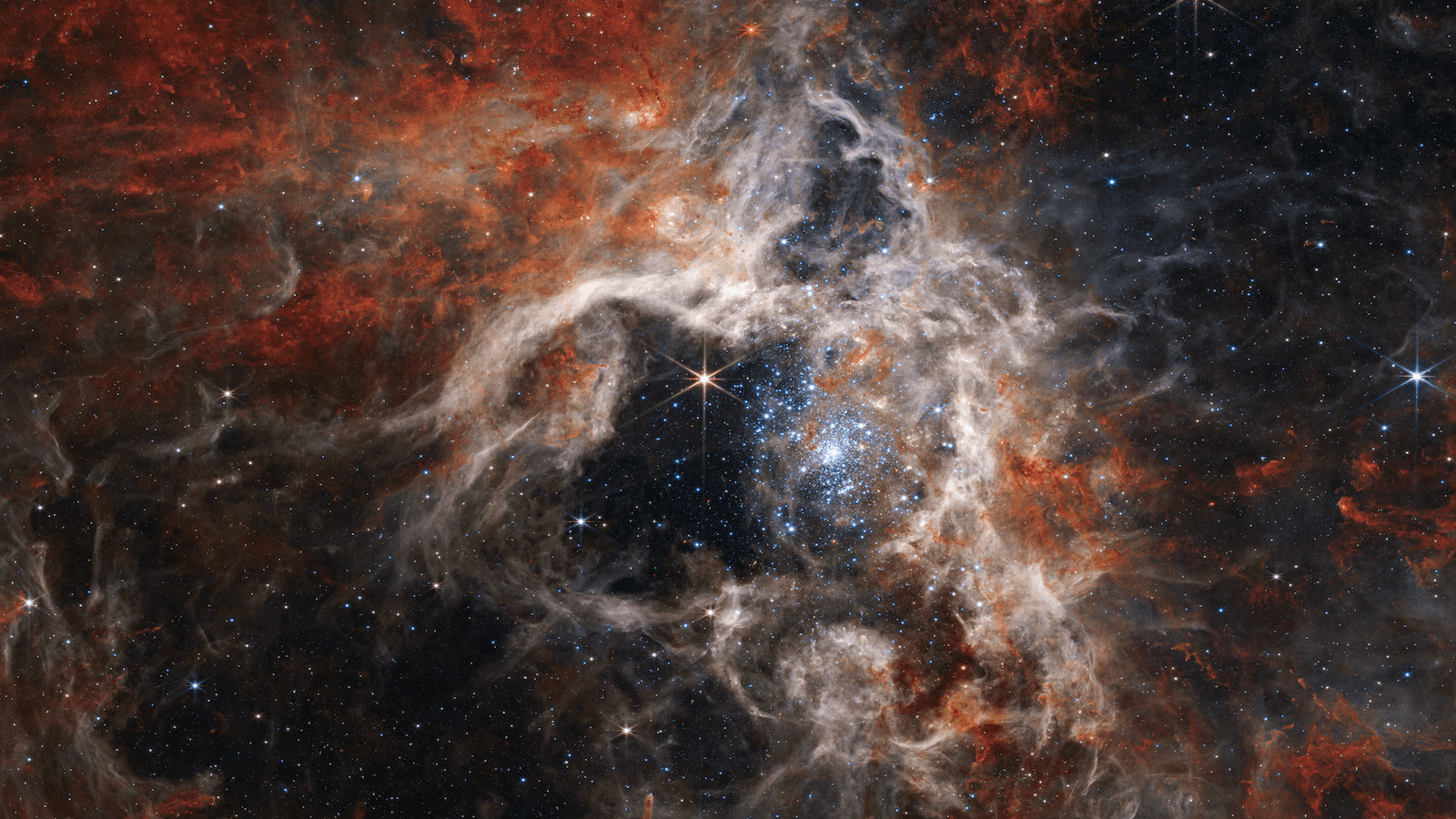 I can’t blame readers for being confused by recent news stories about the Big Bang. The article that kicked them off, “The Big Bang Didn’t Happen,” is bad enough. But some of the rebuttals also don’t get it right. The problem is that writers conflate ideas in astrophysics and use the term “Big Bang” incorrectly. Let me set the record straight.

Let’s call Big Bang #1 the beginning of the universe. It’s what most people think the expression means. This Big Bang is what we find in the mathematics of Einstein’s general relativity if we extrapolate the current expansion of the universe back in time. The equations say that matter and energy in the universe becomes denser and hotter until, eventually, about 13.7 billion years in the past, both density and temperature become infinite. We cannot extrapolate any further back in time, so it’s fair to say that this event, if it happened, would be the beginning of the universe.

I can’t blame readers for being confused by recent news stories about the Big Bang.

This Big Bang is sometimes more specifically called the Big Bang Singularity. This word has somewhat fallen out of favor among physicists, partly because it’s clumsy, but also because I don’t know anyone who thinks this singularity is physically real. Its appearance almost certainly tells us that Einstein’s theory breaks down under extreme conditions. If energy density becomes very large, then space and time curve very strongly, and eventually quantum effects of spacetime become important. To describe those correctly, we would need a theory of quantum gravity—a theory for the quantum properties of space and time—which we don’t have. If we had it, it would probably remove the singularity.

This is what happens in all other theories in which we have singularities popping up: They are mathematical artifacts that stem from using a theory in a range where it should no longer be applied. An example may be the singularity in the surface curvature of a water drop, as it pinches off a tap. This singularity disappears if one considers that the water is made of molecules. What was formerly a point of infinite curvature is now a molecule like all the others.

Einstein’s theory breaks down about 10-43 seconds before the mathematical singularity, a unit also known as the Planck time. Since physicists don’t believe the singularity is real, the phrase “Big Bang” has come to refer to whatever event might replace the singularity in the to-be-found theory of quantum gravity in this Planck time. Let’s call it just that—the Big Bang Event.

The James Webb Space Telescope doesn’t tell us anything about the Big Bang Event.

We understand quite well how matter behaves at energy densities somewhat above those at which the microwave background must have formed, so we trust that our extrapolations back in time are correct until we reach an energy density that roughly corresponds to that which the Large Hadron Collider probes, which brings us to about 10-12 seconds before the hypothetical Big Bang Event. We know nothing about what matter does at higher energy density—even the density in neutron stars is lower than that.

Now, 10-12 seconds isn’t much in human terms, but to get from there to the Big Bang Event, we’d still have to extrapolate over more than 50 orders of magnitude in energy density. That’s 50 orders of magnitude for which we have only speculation. This means the Big Bang Event might happen in our mathematics, but we have no observations that can tell us it happened in reality. Indeed, I think we will never have any observations that confirm the Big Bang Event. Some of my colleagues in astrophysics may disagree. But be that as it may, at least for now we just don’t know how the universe began.

The James Webb Space Telescope is an amazing instrument. It looks at young stars and galaxies that were formed long after the cosmic microwave background, at about 200 million years. That’s impressive, but it doesn’t tell us anything about the Big Bang Event, or its alternatives.

The problem has long been that the term Big Bang is used to refer to the expansion of the universe in general, and not to the event of the creation of the universe in particular. These are, however, two separate scientific hypotheses. We have overwhelmingly strong evidence that the universe expands (call it Big Bang #2), and we are confident about its history back to about the time of the electroweak phase transition, which is what the Large Hadron Collider probes. We have to date zero evidence for the beginning of the universe, whether it was a Big Bang Event or something else.

Historically, the first evidence for the expansion of the universe was Edwin Hubble’s observation that the light from other galaxies is systematically shifted to the red, indicating that they all recede from us. While this may have been the first evidence, the decisive evidence for the expansion of the universe was the discovery of the cosmic microwave background that ruled out the competing hypothesis, the “steady state” universe. As it often goes, the steady state hypothesis was then revised to accommodate the new data, but it is today considered summarily falsified, not just by the microwave background but also by what we know about the formation of structures in the universe.

It only adds to the confusion that the expansion of the universe is often conflated with a particular model for the expansion of the universe. In most cases, that’s the concordance model of the universe, sometimes also called the standard model of cosmology or ΛCDM—Λ being the cosmological constant and CDM standing for cold dark matter (call it Big Bang #3). However, there are a number of alternative models that give rise to a very similar expansion, for example a modification of gravity, which uses equations different from those of general relativity, but similar enough to reproduce the expansion.

So now the term Big Bang refers to three different hypotheses: The Big Bang Event that is the initial singularity, or whatever replaces it (no evidence); the expansion of the universe (extremely strong evidence); and a particular model for the expansion of the universe (largely compatible with evidence, but currently in some tension with data). Again, this confusion is exemplified on Wikipedia. If you scroll down in the Wikipedia article on the Big Bang, it turns into a discussion of the concordance model.

Although the Webb telescope cannot tell us anything about the Big Bang Event and has not shed any doubt on the fact that the universe expands, it can tell us whether the formation of early galaxies is compatible with the concordance model, in particular with the hypothesis of dark matter. That’s because galaxy formation in a universe with dark matter is expected to proceed slowly and gradually. In this case, one does not expect young galaxies to be large. In a scenario with modified gravity, to the contrary, galaxies grow much faster—one does expect large galaxies at early times.

The tentative first evidence from the Webb telescope seems to show large galaxies at early times, which is a problem for the concordance model. However, the error bars on this data are currently large, and quite possibly the situation will change in the coming months. But at least for now, that’s the situation: Astrophysicists are both excited, and upset, that the Webb telescope data seem to cause trouble for the concordance model.

In the attention-grabbing article, “The Big Bang Never Happened,” Eric Lerner questions that the universe expands in the first place. His article was published in August by the Institute of Art and Ideas, a British organization that, by my own experience, prioritizes debate over scientific rigor.

Wikipedia exemplifies the confusion between the expansion of the universe and the creation event.

Lerner argues against the “cosmological establishment [that] has circled the wagons to protect this failed [Big Bang] theory with censorship,” presumably because Lerner has faced some difficulties in getting his alternative theory published. Under normal circumstances, an article that throws out a scientific theory that’s as well established as the expansion of the universe would have sunk to the bottom of the internet in about no time. But because of the confusion around the term “Big Bang,” Lerner’s claim has gathered traction. Lerner writes, for example, that the “images are blatantly and repeatedly contradicting … the Big Bang Hypothesis that the universe began 14 billion years ago in an incredibly hot, dense state and has been expanding ever since.” The images do no such thing.

It becomes clear, later in Lerner’s essay, that he is not attacking the Big Bang Event (which can reasonably be questioned) but the expansion of the universe. And because it is true that the Webb telescope has delivered data in tension with the concordance model, the reader (or editor) who does not know the difference, may get away finding Lerner’s piece reasonable.

But at least one popular article that debunks Lerner doesn’t clarify the debate but falls into the trap of conflating ideas. I can’t disagree with the headline, “No, James Webb Space Telescope Images Do Not Debunk the Big Bang,” but the explanation just contributes to the confusion.

“How did the universe come to be?” the article starts out. “The prevailing theory is everything that is began with the Big Bang. In a nutshell, the theory suggests everything, everywhere, all at once suddenly burst to life … The Big Bang theory is currently the best model we have for the birth of our universe.”

I am not particularly surprised by this debacle, having flagged this terminology confusion years ago. It can be cleared up by writers and scientists with a single rule. If you want to talk about the expansion of the universe, or a particular model for this expansion, then just spell out what you mean. And reserve the phrase “Big Bang” for the Big Bang Event. I understand the need to replace math with words when writing for non-experts, and “Big Bang” is a catchy term for sure. But we shouldn’t replace several different mathematical concepts with the same word. Using clear terminology benefits science communication and makes it harder for pseudoscience to gain hold.

Sabine Hossenfelder is a Research Fellow at the Frankfurt Institute for Advanced Studies where she works on modifications of general relativity, phenomenological quantum gravity, and the foundations of quantum mechanics. Her latest book is Existential Physics: A Scientist’s Guide to Life’s Biggest Questions. Follow her on Twitter @skdh.