Father Time is ticking away in our DNA. 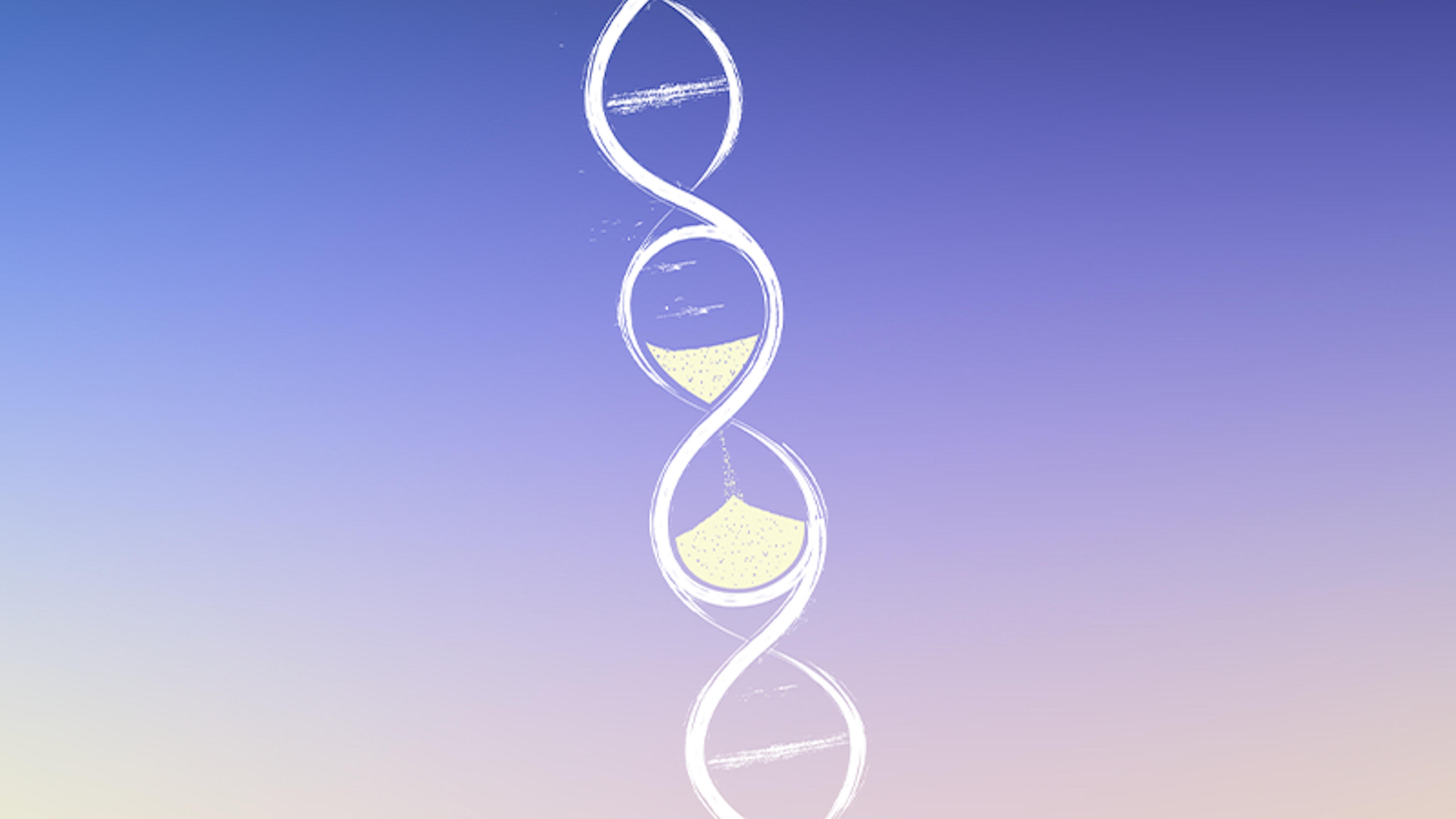 When Gertrude Stein famously quipped that “we are always the same age inside,” she certainly wasn’t referring to the conglomerate of cells, carefully organized into tissues, that form a human body. We all understand that despite our best efforts to preserve youth, our material bodies inevitably age and fail us. Yet trying to understand whether all our body’s cells age at the same rate is not a trivial question in biology. Some of our tissues are built to last and degenerate slowly, like the soft spongy tissues that form the brain, while others, like a red blood cell, have a much shorter lifespan. It’s long been a central tenet of biology that aging results from the random accumulation of damage to specific cells over time.

But in the past decade, Steve Horvath, while a professor in human genetics and biostatistics at the University of California, Los Angeles, honed the thesis that aging in every tissue can be predicted by a single mathematical formula. In a 2022 paper, Horvath, together with an international group of scientists, identified this formula in 185 mammalian species.1 “I think it’s unbelievable that this is even possible,” Horvath told me. “But one formula can measure age in all species and all tissues.”

The formula implies that there is a universal clock to aging. As the years tick by, the risk of mortality increases. Tissues degenerate by accumulating wear and tear in the form of molecular damage, while the aging program depletes the body’s reserves of young stem cells to replace them. Some see this as evolution, a cruel mistress, having programmed us to die. But to Horvath, aging is unintentional. “I don’t want to say evolution selected a program that makes us die. I think it’s just that Mother Nature never selected against it,” he says.

If aging is a coding error in the system, can it be fixed?

If you have empathy for Dorian Grey, Oscar Wilde’s infamous protagonist who bartered his soul to not “grow old, and horrible, and dreadful,” you will agree this is a highly lamentable oversight. “Essentially, the program serves the purpose of development, perhaps protection against malignant transformation, and then later in life it does something bad,” Horvath says. Borrowing a phrase from João Pedro de Magalhães, an aging researcher at the University of Birmingham, he adds, “Aging is a coding error in the system.” Horvath sees this error as an emergent property, the result of cumulative subtle changes in cell identity and tissue composition, which together gradually compromise fitness and lead to a decline of organ function and the manifestation of physical aging.

Horvath is now synonymous with the term “biological age,” a tantalizing metric that refers to the youthfulness of individuals rather than their “chronological age,” as measured from the time of their birth. Markers of biological age can be interpreted as predictors of mortality. The hunt for accurate markers is a longstanding pursuit in the medical field and has included quantitative measurements, such as blood serum analyses of specific proteins or metabolites, as well as composite indices based on the more qualitative measurements of frailty and cognitive function. Most recently, scientists have looked to changes in DNA as the harbingers of aging. Reliable markers of biological age can reveal more about how those of us with an “accelerated” biological clock are aging too quickly. It’s not surprising that known factors that speed the process include lifestyle habits such as smoking and overeating.

Horvath’s “clock” has allowed scientists to “truly quantify aging,” says Vadim Gladyshev, a professor of medicine at Brigham and Women’s Hospital, Harvard Medical School, whose own research focuses on understanding the causative biological processes behind aging. “It was revolutionary. If you think about what was available to us 10 years ago, scientists were not able to quantify aging on the molecular level. They would quantify protein accumulation or telomere length or some kind of other functional feature, but these are individual measurements that are not really accurate. It was clear that the quantification was just not good enough, so you couldn’t draw many conclusions. When Steve developed the first clock, that’s when I knew this was the future. We followed in his steps.”

A mathematician by training, Horvath published his first clock theory in 2011, using an analysis of saliva samples collected from a study of twins, intended to shed light onto the origins of homosexuality. Horvath was part of the study along with his brother, with whom he shares an identical genome but different sexual orientation. The study collected information on the entire genome sequences of the participants, the expression patterns of all genes, and whether the DNA material had accumulated physical “epigenetic” changes, in other words, a sea of information. “We were a data point,” Horvath told me.

Without a penny of funding to invest in studying the possible biological predispositions for homosexuality, Horvath spent countless hours on weekends and in his free time analyzing the wealth of data from the study, motivated by a personal curiosity. But instead of finding a plausible causal link for sexual orientation, his statistical analyses found a startling correlation between certain physical modifications to the saliva’s DNA and the age of the study’s participants. “Honestly, the signal was so strong, you could use any statistical model and you would see it,” he told me. Nevertheless, the result was unexpected because no one was looking at the relationship between epigenetics and age, and his findings kicked off further investigations.

Evolution is a cruel mistress, having programmed us to die.

Epigenetics is the study of physical modifications to our genes that either prevent or enhance their expression. What Horvath was able to observe by narrowing in mathematically on 80 or so genes across the whole human genome, a mere sprinkling of the 20,000, was that the presence or absence of epigenetic marks significantly correlated with the chronological age of the 34 twin pairs from the study.2 The physical marks on the genes, specifically methylations to cytosines (the process by which a small chemical tag, a methyl group, is added to one of the four DNA bases that are used in the encryption of the genetic code), were the equivalent of molecular wrinkles. Horvath had cleverly come up with a statistical model that could be used to count them and date individuals. He called the formula, which calculates the epigenetic marks on the relevant genes, a methylation (or epigenetic) clock for estimating the age of a tissue sample. The result was striking, and the very first epigenetic clock could estimate the age of individuals within an accuracy of 5.2 years.

The advancement of clock theories represented a movement from simple correlation to a causal link between epigenetics and aging. A breakthrough in understanding came from Horvath’s discovery of the “pan-tissue clock.” This is the set of methylation markers that predict the biological age of an individual, not just in one type of tissue, such as saliva from the original study, but in all the various tissues that comprise an organism.

“When I developed the pan-tissue clock, that really garnered the attention of the aging community,” Horvath says. “A pan-tissue clock was paradoxical because methylation is supposed to control cell identity,” and remains fixed through adulthood. When Horvath and his colleagues established that epigenetic clocks counted time at the same pace across all tissues, whether that was quickly dividing blood cells or notoriously slow and highly differentiated brain neurons, the race was on to understand the fabric of time that the clocks are measuring. The universal clock, the key finding of Horvath’s 2022 paper, takes the pan-tissue clock one step further. It chimed the final stroke that unequivocally showed a predictable pattern to aging not only within the body of a single organism, but across mammals.

Horvath is excited about the “vampire idea” of anti-aging.

One big question that arises from Horvath’s research is whether DNA wrinkles are the cause or the effect of aging. Could they simply be akin to cosmetic changes to the body that bear no consequence on the ultimate outcome? After all, a clock simply measures time, it isn’t its driver.

“It is the critical question,” Horvath says. “The discussion we have today pertains to fourth-generation clocks. These are clocks that hopefully are comprised of cytosines that truly have a causative role in the aging process. But we are not there yet. We have some understanding that cytosines may play a causal role,” he stressed. Of particular interest are “enhancer” regions of the genome, which exaggerate the role of certain genes by activating them to exorbitant levels. A recent study of Alzheimer’s disease, for example, found that methylation losses in specific enhancer regions occur in normal aging neurons, but are accelerated in patients with the disease.3

Then there’s the billion-dollar question. If aging, as Horvath said, is a coding error, can it be fixed? Just now, Horvath is excited about an avenue of research he calls the “vampire idea.” In a recent paper, Horvath and colleagues presented the results of a clinical trial where concentrated umbilical cord plasma was injected into 18 audacious senior volunteers (60 to 95 years old), all deemed to be of “normal health for their ages.”4 The researchers measured the effect of the plasma treatment on the subjects’ aptly named GrimAge clock, an epigenetic predictor of “time to death” in humans.5 As part of the trial, participants were injected with 100 ml (roughly half a measuring cup) of concentrated umbilical cord plasma, blood that is collected and processed at the time of a baby’s birth, on a weekly basis for a total of 10 weeks. “Sure enough, GrimAge showed that the umbilical cord plasma rejuvenated the participants—by a small amount, but it was statistically significant,” Horvath says. Earlier studies had shown that transfusing young blood can dramatically reenergize elderly rats. “We found that when a young mouse had coupled circulation to an older mouse, the old mouse becomes younger and lives longer—it is a very striking result,” says Gladyshev, who has participated in the research.

Horvath recently left academia to join a biotechnology startup, Altos Labs, launched in 2022 with $3 billion in investments. Aging, he says, is accompanied by a breakdown of resilience in cells. COVID-19 is the most salient recent example. The virus affects the elderly more drastically because their cells lack the resiliency to fight back. The opportunity to focus on improving “cellular health and boosting resilience,” Horvath says, was the next logical step.

Elena Kazamia is a scientist and freelance journalist with a Ph.D. in plant sciences from the University of Cambridge. She is originally from Greece.