The ‘Weirdest’ Matter, Made of Partial Particles, Defies Description

Theorists are in a frenzy over “fractons,” bizarre, but potentially useful, hypothetical particles that can only move in combination with one another. 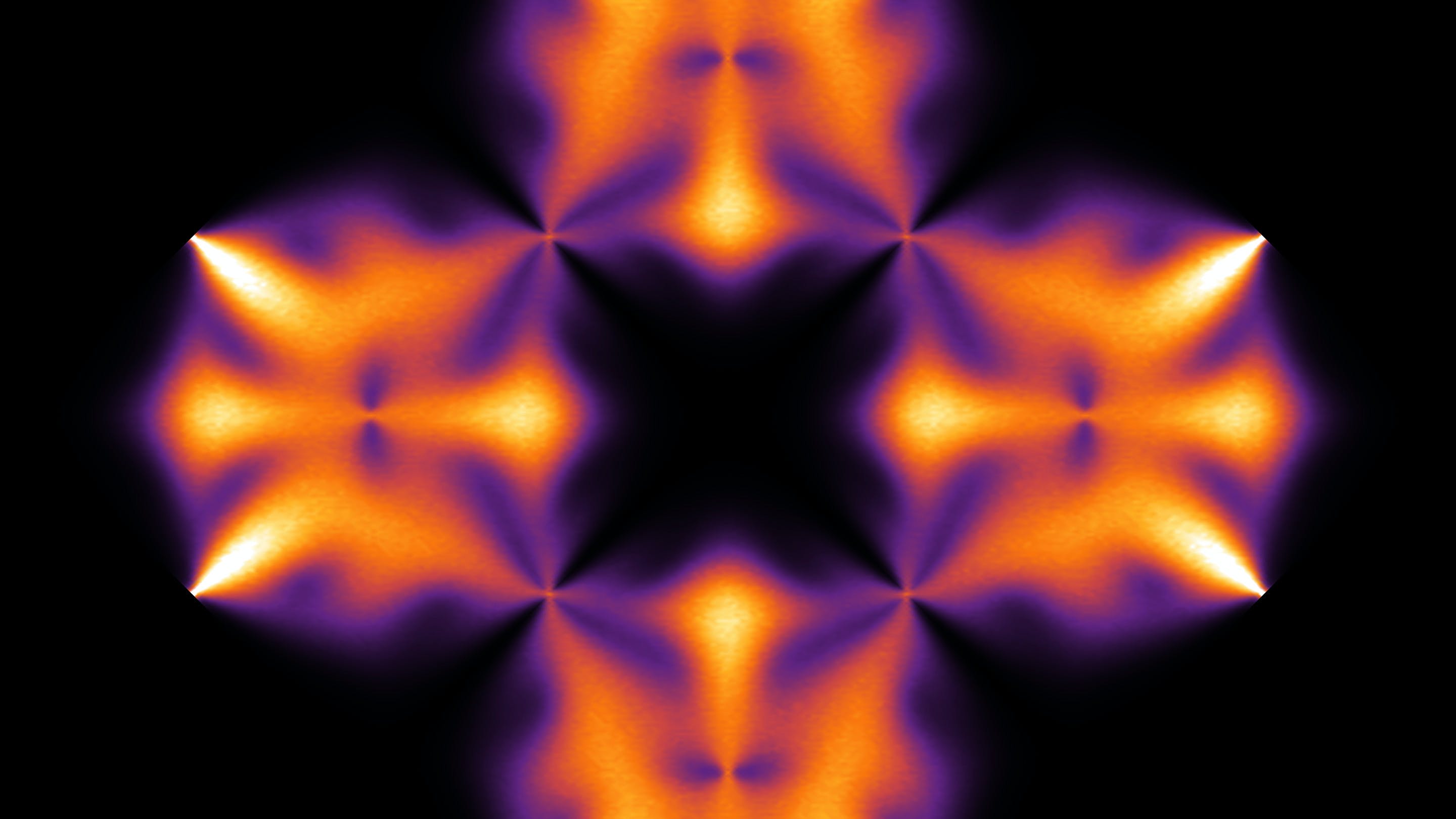 Your desk is made up of individual, distinct atoms, but from far away its surface appears smooth. This simple idea is at the core of all our models of the physical world. We can describe what’s happening overall without getting bogged down in the complicated interactions between every atom and electron.

So when a new theoretical state of matter was discovered whose microscopic features stubbornly persist at all scales, many physicists refused to believe in its existence.

“When I first heard about fractons, I said there’s no way this could be true, because it completely defies my prejudice of how systems behave,” said Nathan Seiberg, a theoretical physicist at the Institute for Advanced Study in Princeton, New Jersey. “But I was wrong. I realized I had been living in denial.”

The theoretical possibility of fractons surprised physicists in 2011. Recently, these strange states of matter have been leading physicists toward new theoretical frameworks that could help them tackle some of the grittiest problems in fundamental physics.

Fractons are quasiparticles—particle-like entities that emerge out of complicated interactions between many elementary particles inside a material. But fractons are bizarre even compared to other exotic quasiparticles, because they are totally immobile or able to move only in a limited way. There’s nothing in their environment that stops fractons from moving; rather it’s an inherent property of theirs. It means fractons’ microscopic structure influences their behavior over long distances.

“That’s totally shocking. For me it is the weirdest phase of matter,” said Xie Chen, a condensed matter theorist at the California Institute of Technology.

In 2011, Jeongwan Haah, then a graduate student at Caltech, was searching for unusual phases of matter that were so stable they could be used to secure quantum memory, even at room temperature. Using a computer algorithm, he turned up a new theoretical phase that came to be called the Haah code. The phase quickly caught the attention of other physicists because of the strangely immovable quasiparticles that make it up.

They seemed, individually, like mere fractions of particles, only able to move in combination. Soon, more theoretical phases were found with similar characteristics, and so in 2015 Haah—along with Sagar Vijay and Liang Fu—coined the term “fractons” for the strange partial quasiparticles. (An earlier but overlooked paper by Claudio Chamon is now credited with the original discovery of fracton behavior.)

To see what’s so exceptional about fracton phases, consider a more typical particle, such as an electron, moving freely through a material. The odd but customary way certain physicists understand this movement is that the electron moves because space is filled with electron-positron pairs momentarily popping into and out of existence. One such pair appears so that the positron (the electron’s oppositely charged antiparticle) is on top of the original electron, and they annihilate. This leaves behind the electron from the pair, displaced from the original electron. As there’s no way of distinguishing between the two electrons, all we perceive is a single electron moving.

“For me it is the weirdest phase of matter,” said Xie Chen, a condensed matter theorist at the California Institute of Technology.

Now instead imagine that pairs of particles and antiparticles can’t arise out of the vacuum but only squares of them. In this case, a square might arise so that one antiparticle lies on top of the original particle, annihilating that corner. A second square then pops out of the vacuum so that one of its sides annihilates with a side from the first square. This leaves behind the second square’s opposite side, also consisting of a particle and an antiparticle. The resultant movement is that of a particle-antiparticle pair moving sideways in a straight line. In this world—an example of a fracton phase—a single particle’s movement is restricted, but a pair can move easily.

The Haah code takes the phenomenon to the extreme: Particles can only move when new particles are summoned in never-ending repeating patterns called fractals. Say you have four particles arranged in a square, but when you zoom in to each corner you find another square of four particles that are close together. Zoom in on a corner again and you find another square, and so on. For such a structure to materialize in the vacuum requires so much energy that it’s impossible to move this type of fracton. This allows very stable qubits—the bits of quantum computing—to be stored in the system, as the environment can’t disrupt the qubits’ delicate state.

The immovability of fractons makes it very challenging to describe them as a smooth continuum from far away. Because particles can usually move freely, if you wait long enough they’ll jostle into a state of equilibrium, defined by bulk properties such as temperature or pressure. Particles’ initial locations cease to matter. But fractons are stuck at specific points or can only move in combination along certain lines or planes. Describing this motion requires keeping track of fractons’ distinct locations, and so the phases cannot shake off their microscopic character or submit to the usual continuum description.

Their resolute microscopic behavior makes it “a challenge to imagine examples of fractons and to think deeply about what is possible,” said Vijay, a theorist at the University of California, Santa Barbara. “Without a continuous description, how do we define these states of matter?”

“We’re missing a big chunk of things,” said Chen. “We have no idea how to describe them and what they mean.”

Fractons have yet to be made in the lab, but that will probably change. Certain crystals with immovable defects have been shown to be mathematically similar to fractons. And the theoretical fracton landscape has unfurled beyond what anyone anticipated, with new models popping up every month.

“Probably in the near future someone will take one of these proposals and say, ‘OK, let’s do some heroic experiment with cold atoms and exactly realize one of these fracton models,’” said Brian Skinner, a condensed matter physicist at Ohio State University who has devised fracton models.

“Fractons do not fit into [the quantum field theory] framework. So my take is that the framework is incomplete,” said Nathan Seiberg, a theoretical physicist at the Institute for Advanced Study in Princeton, New Jersey.

Even without their experimental realization, the mere theoretical possibility of fractons rang alarm bells for Seiberg, a leading expert in quantum field theory, the theoretical framework in which almost all physical phenomena are currently described.

Quantum field theory depicts discrete particles as excitations in continuous fields that stretch across space and time. It’s the most successful physical theory ever discovered, and it encompasses the Standard Model of particle physics—the impressively accurate equation governing all known elementary particles.

“Fractons do not fit into this framework. So my take is that the framework is incomplete,” said Seiberg.

There are other good reasons for thinking that quantum field theory is incomplete—for one thing, it so far fails to account for the force of gravity. If they can figure out how to describe fractons in the quantum field theory framework, Seiberg and other theorists foresee new clues toward a viable quantum gravity theory.

“Fractons’ discreteness is potentially dangerous, as it can ruin the whole structure that we already have,” said Seiberg. “But either you say it’s a problem, or you say it’s an opportunity.”

He and his colleagues are developing novel quantum field theories that try to encompass the weirdness of fractons by allowing some discrete behavior on top of a bedrock of continuous space-time.

“Quantum field theory is a very delicate structure, so we would like to change the rules as little as possible,” he said. “We are walking on very thin ice, hoping to get to the other side.”

Lead image: This simulation shows how a fracton-filled material would be expected to scatter a beam of neutrons. Credit: H. Yan et al., Physical Review Letters