Why the cognitive-map theory is misguided. 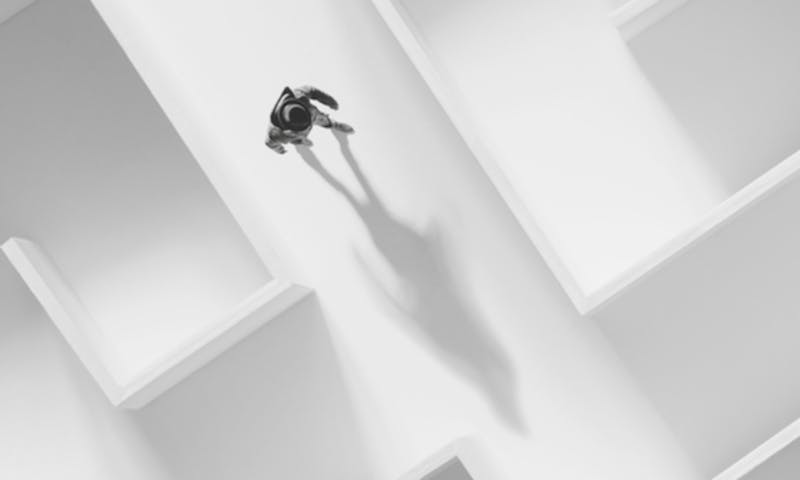 In the early 1980s, the psychologist Harry Heft put a 16 mm camera in the back of a sports car and made a movie. It consisted of a continuous shot of a residential neighborhood in Granville, Ohio, where Heft was a professor at Denison University. It didn’t have a plot or actors, but it did have a simple narrative: The car started moving at 5 miles per hour and made nine turns from one street to another and then came to a stop after traveling just under a mile. Heft then edited the film into two different movies. One showed just the vistas along the route, the expansive layout of environmental features, such as a group of houses or trees seen from a distance. The second film showed the transitions of the route, the parts between each vista where the view is occluded by, say, a turn in the road or the crest of a hill. He asked the study’s participants to watch either of the films and then brought them in person to the start of the route. Who would be able to find their way to the end? Were vistas or transitions more important to the process of what he called wayfinding, a form of navigation based on the perception of temporally structured visual information?1

At the time, the dominant theory in psychology for how people find their way was the cognitive map, which posits that humans and many animals create representations of the environment in the brain that they use to navigate the world. These representations are thought to be “allocentric,” meaning they are independent of an individual’s “egocentric” point of view and show the spatial relationship of objects and landmarks to one other, allowing people to create novel shortcuts. Heft wasn’t sure what the results would be but he was sure that however the study’s participants found their way, they weren’t using cognitive maps. “I don’t think there is such a thing as a cognitive map,” Heft told me in 2017. “Cognitive maps are products of what we know of the layout of the environment. But they are not the basis of our knowledge.”

The cognitive-map theory has inspired decades of experiments and become a ubiquitous and widely used concept. Edward Tolman, a professor at the University of California, Berkeley, introduced the concept in a famous 1948 paper “Cognitive Maps of Rats and Men.” Three decades later, the neuroscientist John O’Keefe tried to put an electrode in the amygdala of a rat but inserted it instead into the hippocampus, the bilateral brain region deep in the temporal lobe, critical to memory formation. O’Keefe’s instrument began recording the firing pattern of a single cell that strangely seemed to correspond to the rat’s physical location in space. For O’Keefe, these “place” cells were evidence that the hippocampus was the site of Tolman’s cognitive map.

But the cognitive map has also been called the theory that refuses to die. The idea that there is an innate geometric representation of the environment in our brains has dissenters in brain science, anthropology, and psychology. As the neuroscientist Richard Morris points out in The Hippocampus Book, maps are things that people look at to extract information. “Adopting this term for the neural activity of a region of the brain seems to carry with it the mental baggage that there must be some cryptic homunculus that is ‘looking at’ the map to do likewise,” he wrote.2 There is no mechanistic explanation of how humans extract information from this map but because the map is such an easily understood concept, it lives on as a “beguiling metaphor.”

Heft’s film experiment led to interesting results. People who only watched the film of the route’s vistas had the worst navigational accuracy. Those participants who viewed the film of transitions had the highest, greater than even those who viewed the movie of the entire route. Heft concluded that sequences of transitions are incredibly valuable for learning a route. But his subsequent experiments showed that time was also crucial for absorbing this information. If participants merely saw still images of the transitions, rather than watching the film moving through space, their ability to walk the route decreased. Heft began to see the process of wayfinding as a kind of reciprocal interaction between the perceiver and environmental structure, a continuous loop of perceiving and acting across time.

For Heft, the dominance of the cognitive-map theory has prevented a deeper understanding of human navigation. His own interest in the subject goes back to the 1970s when he read a book called The Senses Considered as Perceptual Systems. Written by the psychologist James Gibson, the book argued that humans could directly perceive the world through ecological information rather than assemble our sensory inputs into mental representations. The book was a revelation for Heft, who wrote to Gibson and asked if he could informally study under him at Cornell University. Gibson said yes. At the time, Gibson was working on a new book, The Ecological Approach to Visual Perception, in which he talked about wayfinding and how it consists of a sequence of transitions—the stretches of connected sequences over time—that connect vistas.

Our ability to formulate cognitive maps arises from our constant exposure to actual maps, starting as kids.

The theory of wayfinding doesn’t negate the idea that most people can generate and use a mental map to get from A to B. Gibson believed that by following paths, the navigator can perceive the overall structure of the environment. But he thought that “it is not so much having a bird’s eye view of the terrain as it is being everywhere at once,” a somewhat mysterious concept that seems to indicate we can transport ourselves mentally to any starting point in the environment and create a novel route to where we want to go.3

But culture more than biology may explain how easily we can create map-like representations of space in our heads. Maps, Heft points out, are a cultural invention with a specific sociocultural history in Western traditions. He asks, “Is there something characteristic about Western cultural history that might have recently led to our taking Euclidean reasoning … as springing from our biological nature?” Heft points to the spread of coordinate mapping in the 14th century, inspired by the Greek mathematician Claudius Ptolemy’s Geographia, an atlas containing geographical coordinates for the Roman Empire and the world. This coincided with the invention of three-dimensional “Cartesian” space in the 17th century, the idea that space is not hierarchical (heaven, earth, hell) but can be divided into a stable, geometric planes. In the west, these two cultural developments led to an explosion in mapping, often in the service of exploration and colonization. And, it may also have conditioned people’s cognition in favor of allocentric representations of space.

“By merging these two lines of sociocultural history—map making and conceptions of space—our cultural tradition is provided with a very powerful way of thinking about environments for navigational purposes,” Heft wrote. “What results is an abstract framework that, among other things, makes it possible to adopt a point of view that is not normally attainable for a terrestrial organism, namely, a view of the earth’s surface as seen from ‘above,’ as if it were a cartographic map.”4

Today, our ability to formulate cognitive maps may have much to do with our constant exposure to actual maps starting as young children and throughout our daily lives. Just as maps are a navigational tool favored by our map-saturated culture, they have also become a conceptual model for understanding navigation and cognition, the reason why Tolman and so many others reached to the map metaphor for understanding how we find our way.

The cognitive-map theory prioritizes spatial knowledge whereas the idea of wayfinding emphasizes the temporal dimension of human experience. The anthropologist Tim Ingold, a professor of anthropology at the University of Aberdeen in Scotland, has said that there is no such thing as the cognitive map. Ingold’s and others’ explanation for how people navigate has been called the “practical-mastery theory,” which posits that navigation is a process of memorizing routes encoded in temporally organized sequences. For this reason, Ingold and others often emphasize the metaphor of listening to a piece of music, humming a tune, or a performance for navigating. Additionally, Ingold argues that what he calls “wayfaring,” the movement of terrestrial beings through the world along paths of travel, knowing as they go rather than before they go, is the more apt description of navigating. The term “space” itself, says Ingold, fails to accurately capture the realities of life and human experience. Instead, he writes, we are organisms inhabiting environments whose knowledge of the world is “forged in movement.” It’s us that bring places into being, rather than places existing in the abstract and empty notion of “space.”5

The dominance of the cognitive-map theory has prevented a deeper understanding of human navigation.

Some skeptics of the cognitive-map theory came not from psychology or anthropology but from neuroscience. Howard Eichenbaum, a professor at Boston University until his untimely death in 2017, was a neuroscientist who studied the hippocampus and its function recording events for episodic memory, the remembrance of events from the past.6 He argued that the hippocampus functioned more in concert with time than space. He saw navigation as a memory task, involving the recording of sequences and events in time rather than computing relationships in Euclidean space. His experiments looking at the activity of hippocampal cells led him to think these cells “mapped” other dimensions of human experience. “Spatial cognition need not be Euclidean or linear,” he told me before he passed. “In children, it is very non-linear, they leave out stuff, expand spaces, do crazy stuff.” According to him, the evidence pointed to the idea that the hippocampus wasn’t a specialized spatial structure but had the ability to organize things in a temporal dimension and also “social space” or “musical space.” “It’s constructing spaces and navigating spaces that are not geographic space,” he said. “And that to me proves the generality of the hippocampus. The more I can show you, the less tenable the hippocampus as cognitive-map theory becomes.”

As our understanding of human cognition and particularly the hippocampus broadens, perhaps we’ll need to reach for new, unexpected metaphors to understand how we move through the world. The scholar Ruth Dalton and her co-authors recently wrote in Frontiers in Psychology that wayfinding draws upon many types of cognitive functions, but that it is also a social activity that involves collaboration between people, people-as-cues, symbolic artifacts, and communication.7 In Dalton’s analysis of all the ways that people influence one another’s wayfinding processes, she found that “these contributions are extensive and intricate in nature, and that their oversight thus far has distorted our understanding of wayfinding processes.”

Reaching beyond the cognitive map metaphor opens up new possibilities and ways of thinking about our direct experience. The next time you need to get somewhere, ignore the metaphor of a map in your head. Perhaps you’ll notice the ways that memory, perception, community, imagination, language, reasoning, decision-making, and emotion work together to get to your destination or back home. Maybe you’ll find that wayfinding leads to deep attachments between you and the environment you inhabit.

M.R. O’Connor is the author of Wayfinding: The Science and Mystery of How Humans Navigate the World, from which portions of this article are adapted. Her reporting has appeared in The New Yorker, The Washington Post, and UnDark, among others.