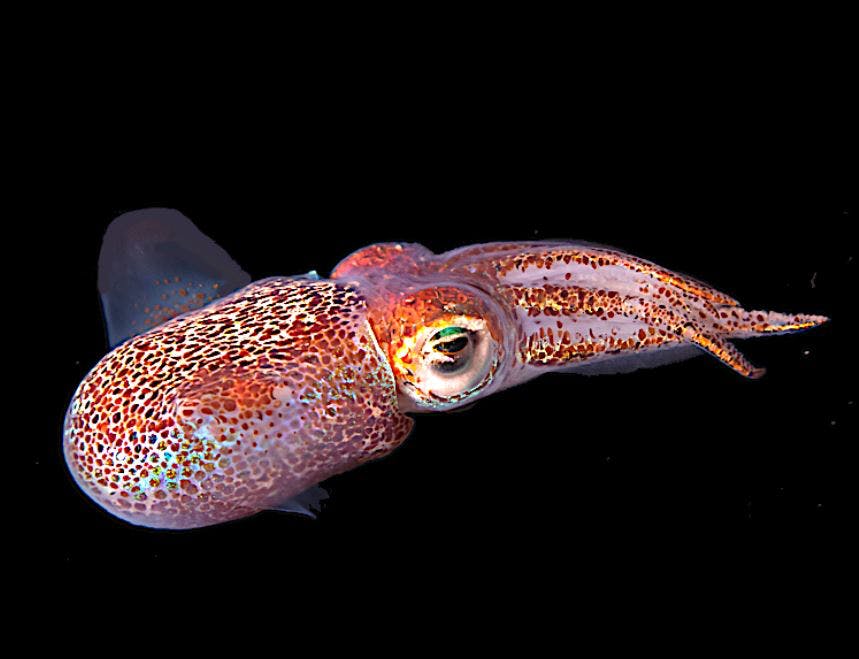 Light draws attention. Spotlights tell us what’s important on stage or illuminate an escaping criminal. The glow from a smartphone in a movie theater quickly exposes the impropriety of its owner. Light reveals things hidden in the darkness. Usually.

The Hawaiian bobtail squid (Euprymna scolopes) has adopted a camouflage strategy that turns the classical tropes of light and darkness upside down. The palm-sized mollusks are nocturnal, inhabiting shallow coastal waters around the globe, where they forage for shrimp in the cover of darkness. But shadows are often the squid’s undoing. Even on the darkest nights, its body blocks the moonlight and starlight that penetrates the water around it, leaving an eight-legged silhouette that’s visible from below—a tell exploited by predators who’ve learned to cruise along the ocean floor looking up. The squid have a clever defense, though: In a nearly pitch-black environment, they’ve evolved to camouflage themselves in a most counterintuitive way—by lighting up.

The Hawaiian bobtail squid emits a glow that camouflages them against the night sky. To predators passing below, the squid blend right in with the rest of the dimly lit water. “It’s like a Klingon cloaking device,” said Margaret McFall-Ngai, a University of Wisconsin researcher who has been studying Euprymna scolopes for decades.

Producing light is a tricky and energy-expensive endeavor. Fortunately for the squid, they’ve managed to outsource the job. A luminescent strain of bacteria called Vibrio fischeri has struck up a symbiotic partnership with the squid. The microbes supply photons of faux starlight; the squid provide a sugar-and-amino-acid solution that feeds the bacteria, in addition to a safe place to live.

Research from McFall-Ngai’s lab shows that the squid has a remarkable way of making sure its light keeps glowing. Producing light is difficult for bacteria, just as it is would be for the squid. “Luminescence is expensive. It’s about 5% of the metabolic potential of the bacterial cell. That’s a lot,” says McFall-Ngai. Since producing light is so taxing for the bacteria, she and her team expected to find freeloaders—bacteria taking advantage of the squid but not producing any photons. They found none. In fact, when the team knocked out the genes for luminescence in Vibrio fischeri so that they never lit up,the squid flushed the bum bacteria out of their bodies. Slackers are given no quarter, and even more impressively, the mollusk can differentiate, down to the single cell, which of its symbionts are holding up their end of the bargain, and kick out only the cheaters.

The extraordinary ability of the Hawaiian bobtail squid to detect freeloaders comes from a unique structure in the squid’s body, called the light organ, which houses the bacteria. When McFall-Ngai and her team examined the light-organ tissue, they found something remarkable: it contained many of the tissue types usually associated with the eye. Most important among these was a tissue with photo-sensitive proteins analogous to the retina. When the bacteria fluoresce, the light organ detects the photons and lets the squid know its tenants are paying rent. The squid’s all-seeing inner eye watches to make sure it isn’t being cheated.

Initially, it seemed that the squid was very much in control of its symbiosis with Vibrio fischeri. But a study from McFall-Ngai’s lab suggests that the relationship is more complicated, and that the microbes may be more manipulative than anybody realized.

The research shows that bacteria living in the squid aren’t just providing it with starlight camouflage—they’re also influencing its biological clock. A group of light-sensitive proteins in squid (and other animals) called cryptochromes have been identified as key regulators of the circadian rhythm. Elizabeth Heath-Heckman, a doctoral candidate in McFall-Ngai’s lab, found that the cryptochromes are controlled by two genes, called Cry1 and Cry2. She also discovered that Cry2 expression increased in response to the light from Vibrio fischeri, while Cry1 cycled in response to environmental light. Much like how staring at a smartphone screen late at night can trick your body into thinking it’s still daytime, the bacteria control their host’s biological clock with the light they produce. “By influencing cryptochromes, the symbionts have the capability to change transcription [the activity] of all of the downstream genes that are controlled by Cry gene,” said Heath-Heckman. That could have big effects on the squid; some estimates predict that as much as 10% of all genes are controlled, at some level, by the circadian rhythm. At this time, it’s still not clear whether the bacteria or the squid are benefiting from this change, or if it’s simply an strange consequence of their symbiosis.

Heath-Heckman’s discovery that symbiotic bacteria can influence the circadian rhythms of their host was the first of its kind, and has since been confirmed by other experiments. The understanding of how the microbiome influences host health is still in its infancy, but already we’ve learned that microbes have a profound effect on everything from immune system development to vitamin metabolism. It appears their talents extend to giving their hosts cloaking devices and different internal clocks as well.

This article was originally published in Nautilus Magazine‘s blog, Facts So Romantic, on March 28, 2014.