This Is Spock’s Favorite Psychedelic 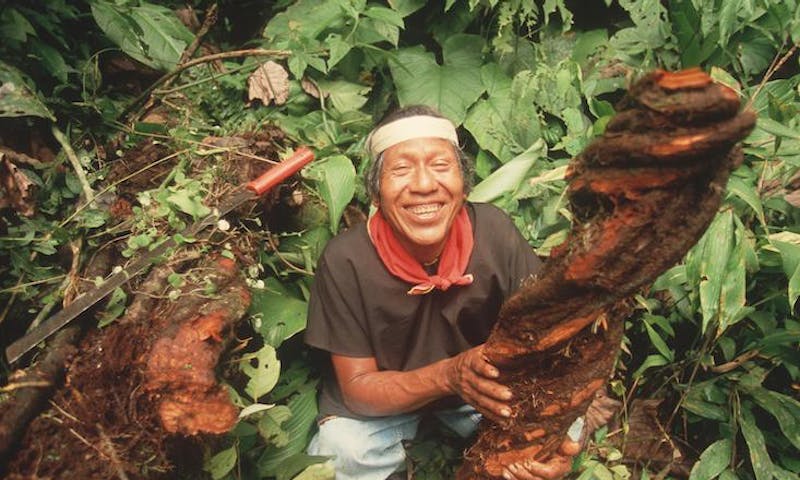 One chilly spring night in early March, I went to the Rubin Museum of Art, in New York City’s Chelsea neighborhood. The Rubin, according to its website, “provides immersive experiences that encourage personal discoveries and spark new ways of seeing the world.” I was there for a “Brainwave” event, a conversation series nine-years running, in which “neuroscientists and intriguing personalities” discuss the mind. This year the guiding theme was “emotion.” On-stage were the clinical neuroscientist Heather Berlin, who studies the neural basis of emotional disorders and teaches psychiatry at the Mount Sinai School of Medicine, in New York; and the television and film actor Zachary Quinto, who’s perhaps known best for playing Spock in J.J. Abram’s 2009 reboot of Star Trek.

It didn’t take long for their conversation to get a bit personal and veer into the spiritual. In 2010, even though he felt professionally fulfilled, Quinto said, privately he was floundering. That year, Quinto starred in an off-Broadway revival of Angels in America, a play that focused on the sexual and social issues of the 1980s; Quinto, who’s gay, described the experience as emotionally devastating. He saw a therapist, but the sessions, he felt, were insufficiently spiritual. (A staunch Catholic growing up, he once considered the priesthood, he said, but lapsed at 18, put off by the church’s stance on his sexual orientation.) Quinto briefly dabbled in Shambhala Buddhism, a spinoff of Tibetan Buddhism that offers followers a secular path towards enlightenment, but “craved something more,” he said. “I was tightly wound and self-loathing, very anxious. I felt like I needed to breakthrough.”

That breakthrough was ayahuasca, a tea-like brew prepared from an Amazonian vine (Banisteriopsis caapi) and leaves of a bush (Psychotria viridis). A friend, he said, suggested he try it. Native Amazonians, considering it divine, consumed it for hundreds of years as a medicinal remedy. The plants contain harmala alkaloids and dimethyltryptamine (DMT), a psychedelic compound resembling serotonin in molecular structure. When ingested orally, in combination, they induce, for several hours, a dream-like state of consciousness featuring intense visuals, sounds, and emotional and cognitive effects.

The future of psychedelic drugs in alleviating anxiety and PTSD is bright.

For Quinto, ayahuasca finally did the trick. To date, he’s attended at least 20 traditional, guided ayahuasca ceremonies in Peru. The psychedelic brew has not only given him a steadying sense of purpose and self-understanding, he said, it’s also created a way for him to cope with the death, last year, of his good friend Leonard Nimoy (the original Spock).

The recent popularity of ayahuasca—due to increased tourism to the Amazon—has lead researchers to study “the brew’s potential therapeutic or salutogenic value,” say Gerald Thomas, a scientist at the Centre for Addictions Research of British Columbia, at the University of Victoria, Canada, and colleagues. Though ayahuasca, as Quinto pointed out, is a restricted substance in the United States, Native American communities in Canada have religious allowances. So Thomas and several of his colleagues visited a First Nations community in rural British Columbia and conducted an in-depth study, in 2013, of ayahuasca’s effects on wellbeing. The researchers observed 12 people who went through a rigorous four-day schedule of group counseling and two traditional ayahuasca ceremonies, led by a Shipibo master ayahuasquero, trained to administer the brew in an Amazonian folk healing ritual context.

What they found wouldn’t have surprised Quinto: Six months after the experience, the participants reported higher levels of hopefulness, feelings of empowerment, mindfulness, and overall quality of life compared to before, and during, the ayahuasca retreat. Use of addictive substances among the participants, like alcohol, tobacco, and cocaine, declined as well (though marijuana and opiate use, the authors note, did not). Their findings corroborated what previous studies have shown: Ceremonial ayahuasca drinking has positive effects. “Given the potential to decrease the personal suffering and social costs associated with addiction,” write Thomas and colleagues, “further research on ayahuasca-assisted addictions treatment is warranted.”

Berlin agrees. The one theme that resurfaces again and again in psychedelic studies, she tells me, is the fact that psychedelic drugs—and out-of-body experiences induced by drugs—offer some form of reflection and insight, not unlike those attained in deep states of meditation. That’s definitely worth investigating, she says. “It’s neuroscience meets psychoanalysis.” The future of psychedelic drugs in alleviating anxiety and PTSD is bright. Berlin highlights the use of MDMA, or ecstasy, in controlled therapy sessions to allow patients to access suppressed emotions and memories and the use of mushrooms to ease the anxieties of terminally ill cancer patients. She says it allows them to enter the last stage of their life a bit more comfortably.

Berlin doesn’t experiment with psychedelics as part of her research, but that doesn’t mean she can’t empathize with the self-reports of her patients using them. “Everyone has a unique experience,” she says. “You really need to talk to them about what they feel. The way they see the world can be very different from you. You have to be as objective, not subjective, as possible.”

Tanya Basu, a Brooklyn-based writer who focuses on how humans interact with each other, has had her work appear in The Atlantic and in Science of Us. Follow her on Twitter @mstanyabasu.