To Make the Perfect Mirror, Physicists Confront the Mystery of Glass

Sometimes a mirror that reflects 99.9999% of light isn’t good enough. 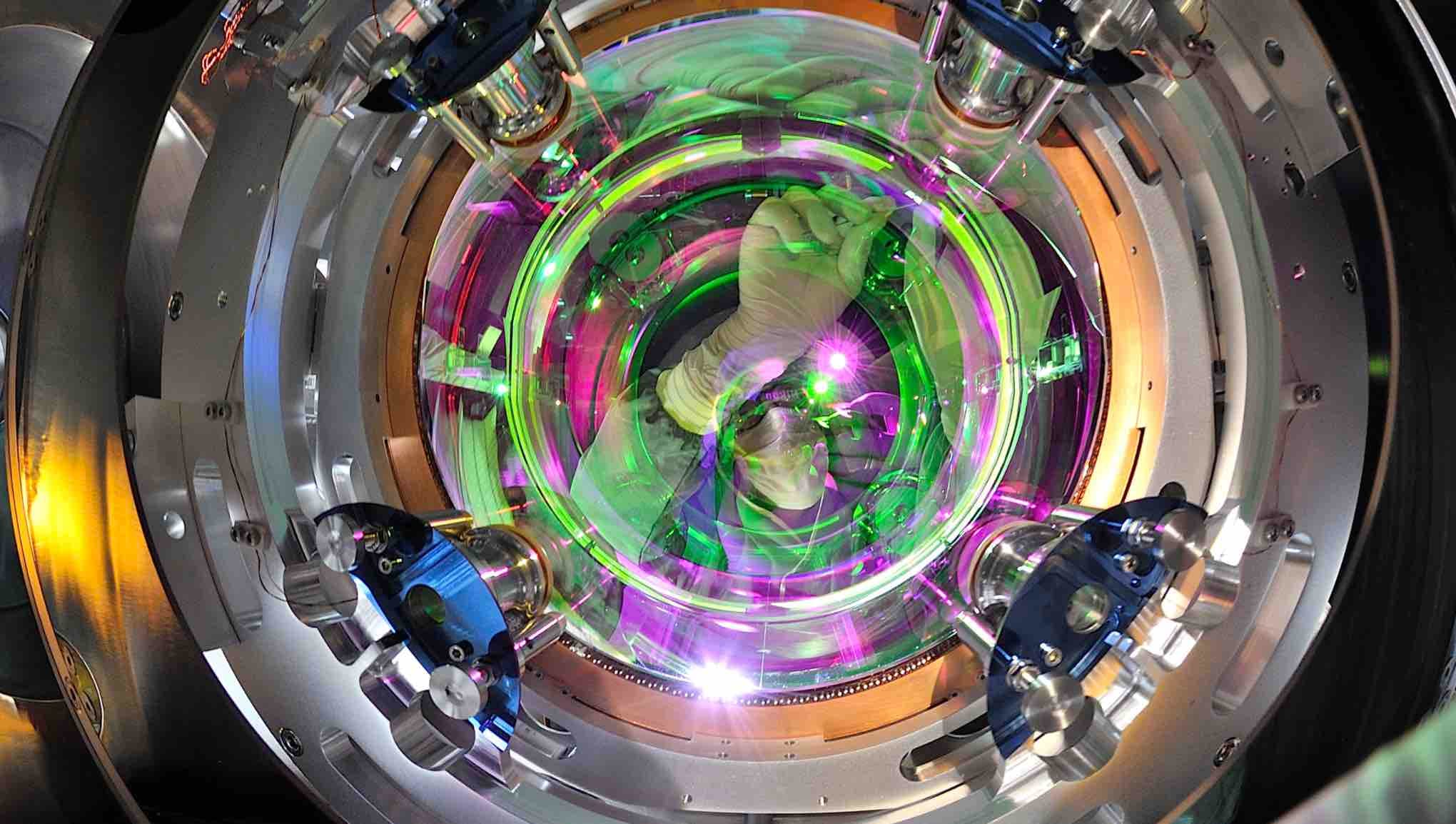 The Laser Interferometer Gravitational-Wave Observatory can sense movements thousands of times tinier than the width of an atom partly because of the instrument’s near-perfect mirrors. The mirrors bounce laser beams back and forth down the arms of LIGO’s L-shaped detectors. Changes in the relative lengths of the arms reveal when a gravitational wave flutters past Earth, stretching and squeezing space-time.

They’re nothing like regular mirrors. In your bathroom mirror, light reflects off metal, which has glass in front of it merely for protection. But LIGO’s 100-kilowatt laser would fry any metal. Instead, its mirrors are made entirely of glass.

Normally, glass isn’t reflective. Metal reflects because light waves shake its freely moving electrons, which absorb and reemit photons in the process. Glass, by contrast, lets most light pass through because its electrons stay within their atoms and don’t interact much with light. But LIGO makes mirrors out of glass using a trick first invented in 1939. The mirrors consist of 70 layers of glass that alternate between silicon oxide glass (or “silica,” the material of most glass) and tantalum pentoxide (“tantala”). Each layer reflects a small fraction of the light. The thickness of each layer is chosen with exquisite precision so that, for the exact wavelength of LIGO’s laser, all the reflections constructively interfere, adding up to a mirror that’s 99.9999% reflective.

LIGO’s mirrors are imperfect, however, because of a strange form of noise that is baked into glass, a mysterious substance in general. Glass consists of atoms or molecules that are haphazardly arranged like those in a liquid yet somehow stuck, unable to flow. Physicists believe that the noise inherent in glass comes from small clusters of atoms switching back and forth between two different configurations. These “two-level systems” ever so slightly change the distance laser light travels between LIGO’s mirrors, since the surface of each glassy layer shifts by as much as an atom’s width.

“LIGO at this point is literally limited by that,” said Frances Hellman, a glass specialist at the University of California, Berkeley and a member of the 1,000-person LIGO scientific team. Despite the detectors’ “astonishing vibration isolation, damping, all kinds of stuff that has led to the extraordinary sensitivity,” Hellman said, “the one thing they haven’t been able to get rid of are these funny little atomic motions in the mirror coatings.” Given the thousandth-of-an-atom amplitude of the gravitational waves LIGO is looking for, the atomic motions are a big problem.

There’s hope, though. Fueled by recent theoretical insights about the nature of glass, Hellman’s group and others are racing to find more perfect glass to use in LIGO’s mirrors. Advanced LIGO Plus, the next iteration of the experiment, slated to begin in 2024, will require mirrors that are less than half as noisy as the current ones. In conjunction with other upgrades, this improvement will translate into seven times more gravitational-wave detections—approximately one every few hours.

Already, the researchers have found some candidate glasses that might satisfy the design requirements, but they’re still hoping to discover a clear winner. “For a long time it was a slightly random approach,” said Iain Martin, a glass physicist at the University of Glasgow who is also part of LIGO. “Now we are in a position of being much more guided in our search.”

Hellman’s group is looking for something approaching “ideal glass,” a hypothetical phase of matter predicted decades ago. The molecules in ideal glass are theoretically packed together in the densest possible random arrangement, a perfectly stable state that has no two-level systems at all. Ideal glass, if it exists, would explain what’s happening in all glass; it would be the state that molecules in regular glass are trying to reach.

In 2007, the quest for ideal glass led the physicist Mark Ediger to invent a new glassmaking technique that produces much more stable glass than before. Instead of cooling a liquid until it hardens, as glassblowers have done for 4,000 years, Ediger and his team dropped molecules one by one onto a surface as if they were Tetris pieces, allowing them to find snug fits. A 2014 experiment by Hellman and her Berkeley team indicated that “ultra-stable” silicon glass created in this way has far fewer two-level systems than normal glass.

A few years ago, Hellman realized that ultra-stable glass might also work well for LIGO’s mirrors, because it would suffer less of the noise that currently afflicts them. Ultra-stable silicon won’t work, because it absorbs too much light with a wavelength of 1.5 microns, the wavelength of LIGO’s laser. Over the past two years, Hellman’s group has played with the properties of silica, tellurium oxide (telluria), selenium oxide (selenia) and germanium oxide (germania).

Martin and his Glasgow group have focused their pursuit on glass that lacks a particular molecular structure consisting of a pyramid-like arrangement of four molecules, where two of the molecules are also part of another tetrahedron. Work in 2019 in collaboration with researchers at Stanford University showed that these arrangements lead to more noise—probably because they create more two-level systems—than structures in which neighboring tetrahedra in the glass share only one molecule. Martin sees germania glass, which favors these low-noise arrangements, as a promising replacement for the 35 tantala layers in LIGO’s 70-layer mirrors. Germania by itself reflects too little light, but doping it with titanium can help with that. (The other 35 layers would still be silica, as in the current mirrors.)

The other option identified so far, according to Martin, would be to use Hellman’s ultra-stable silicon in some of the layers. He and collaborators have found ways of reducing silicon’s light absorption at LIGO’s operating wavelength. “We think it’s low enough that it could actually be used,” he said—but only in the bottom layers of the mirror, where most light has already been reflected and there’s too little left for absorption to be a problem. “It’s possible that could even be combined with the germania idea and have germania and silica in the top part [of the mirror] and silicon and silica in the bottom half,” Martin said.

The original deadline for making a choice was May 30, 2019, but the LIGO team is mulling a six- to 18-month extension because of the coronavirus pandemic. “There’s still a lot of work to be done before we’re sure of what coating will work,” said Martin, and all lab research for this project has been put on indefinite hold.

Of course, if the perfect, ultra-stable, absorption-free glass is discovered sometime after the deadline, it could change LIGO’s schedule. “If we could drop the noise by an order of magnitude,” Hellman said, “they would plan another shutdown.”

Lead image: LIGO’s mirrors are made of 70 layers of glass. The mirrors are designed to perfectly reflect the wavelength of light used by LIGO’s laser. Credit: EGO/Virgo Collaboration/Perciballi