How do black holes merge and make gravitational waves? Maybe with a little help from their friends. 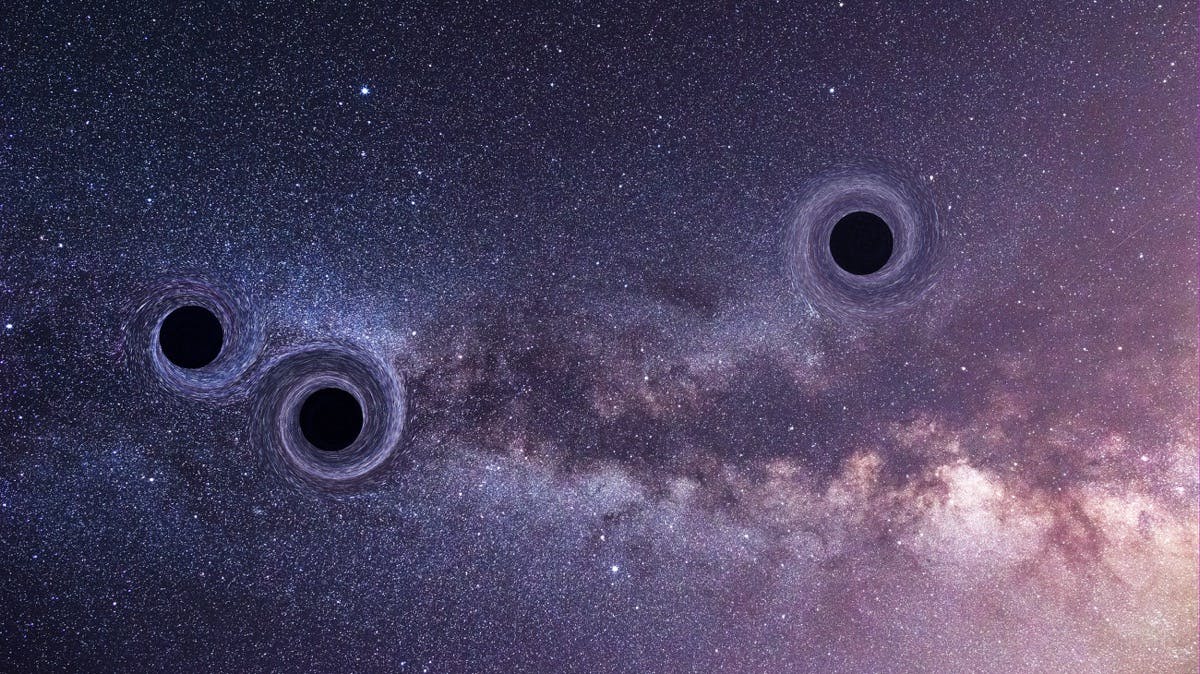 The spiraling dance of a pair of colliding black holes should last for billions of years. Yet we’ve caught about 10 black hole collisions since 2016—far more than we would expect. Some process must be at work to accelerate the collision process, to make black holes come together more quickly than anticipated.

The trouble starts before black holes form in the first place. Black holes are essentially dead relics of massive stars. As these progenitor stars age, they pass through a phase when they expand into supergiant stars several times their original size. At this point, if two stars are orbiting close together, one will be subsumed into the other, and the pair will collide before ever becoming black holes.

This suggests that any pair of large black holes must start their existence extremely far apart—so far apart that collisions will be extremely rare. And yet, such collisions are fairly common. “Us theorists, we really like it when there is a new puzzle around,” said Smadar Naoz, a theoretical astrophysicist at the University of California, Los Angeles. “Everyone is jumping with new ideas.”

So how can you get tight-knit black hole pairs that were never tight-knit supergiant star pairs? One potential explanation holds that two massive stars could start far apart and grow closer as they collapse into black holes. Or perhaps some stars collapse without ever ballooning into supergiant stars, or solitary black holes meet one another and bind to form pairs.

In the past few years, another idea has appeared. Under the right conditions, a third object can trigger a process that brings a pair of objects closer together. This three-body effect provides a way for far-apart massive stars to first collapse into black holes, and then draw close enough to collide. And because massive stars are often in triple systems, researchers say it’s important to take this three-body effect into account.

To understand how this process might work, imagine the Earth and the moon spinning around each other. These two will trace steady orbits around their common center of mass almost indefinitely—unless something interferes.

A third object wouldn’t necessarily affect the stability of the Earth-moon system, so long as the three objects rotated in the same flat plane (as most every object in the solar system does).

Yet objects in space are not, in general, limited to a single, flat surface. Imagine the third object rotating around the Earth-moon system at an angle, so that the orbits are not aligned. If the angle between the orbits is large enough, gravitational effects from the third object could interfere with the orbits of the Earth and moon. Their paths will stretch out into long ellipses, which take the objects much farther apart before swinging them much closer together. When they’re closest, other effects can kick in to shrink their orbits even further. Eventually, the Earth and moon could crash into one another, with cataclysmic consequences for both.

“The beauty of this channel is that there are very few uncertainties in the way the black holes merge,” said Fabio Antonini, an astrophysicist at the University of Surrey, who has published several papers on the idea. “It’s just gravity, it’s just dynamics.”

But like each of the other proposed formation channels for black hole mergers, the triple process has pieces that researchers still need to figure out. For example, it’s unclear how often the orbits in triple-star systems will be angled enough to trigger the effect.

One central advantage of this idea is that it can be tested. Black holes that merge through the triple process should have orbits that are less circular, or more eccentric, than those of black holes that merge from an undisturbed binary system. Scientists may be able to measure the eccentricities of black holes’ orbits in the near future, said Daniel Holz, an astrophysicist at the University of Chicago and a member of the LIGO collaboration, which searches for the gravitational waves coming from black hole collisions.

“Part of what makes those exciting is you might end up with systems, for example, with high eccentricity,” said Holz, who doesn’t study the triple-system process. “And if that’s something you could measure, then that would be kind of a smoking gun that something fancy is going on.”

The rotations of black holes may also tell scientists whether a black hole merger happened because of a triple-system process. If a black hole binary system formed through the evolution of two stars without the influence of other bodies, they should be rotating and orbiting more or less in the same direction—like two ice skaters spinning clockwise as they skate clockwise around each other. But according to the work of astrophysicists such as Dong Lai and Bin Liu of Cornell University, interference from other objects, like a third body in a triple system, can tilt the black hole orbits so that their orbital axes and rotation axes are at an angle to each other. The effect is hard to measure directly with current technology, but researchers hope to find clever new ways to infer these rotation alignments.

So while it’s still too early to tell exactly how black holes get close enough to merge, researchers are holding the problem up as an exemplar of why gravitational wave detections are so important. “You don’t want to just have gravitational wave observations for their own sake,” said Ilya Mandel, an astrophysicist at Monash University in Australia. “You want to use them as probes to study things which are otherwise hard to understand and hard to measure directly.”