Biodiversity itself seems to nourish the rainforests of the sea. 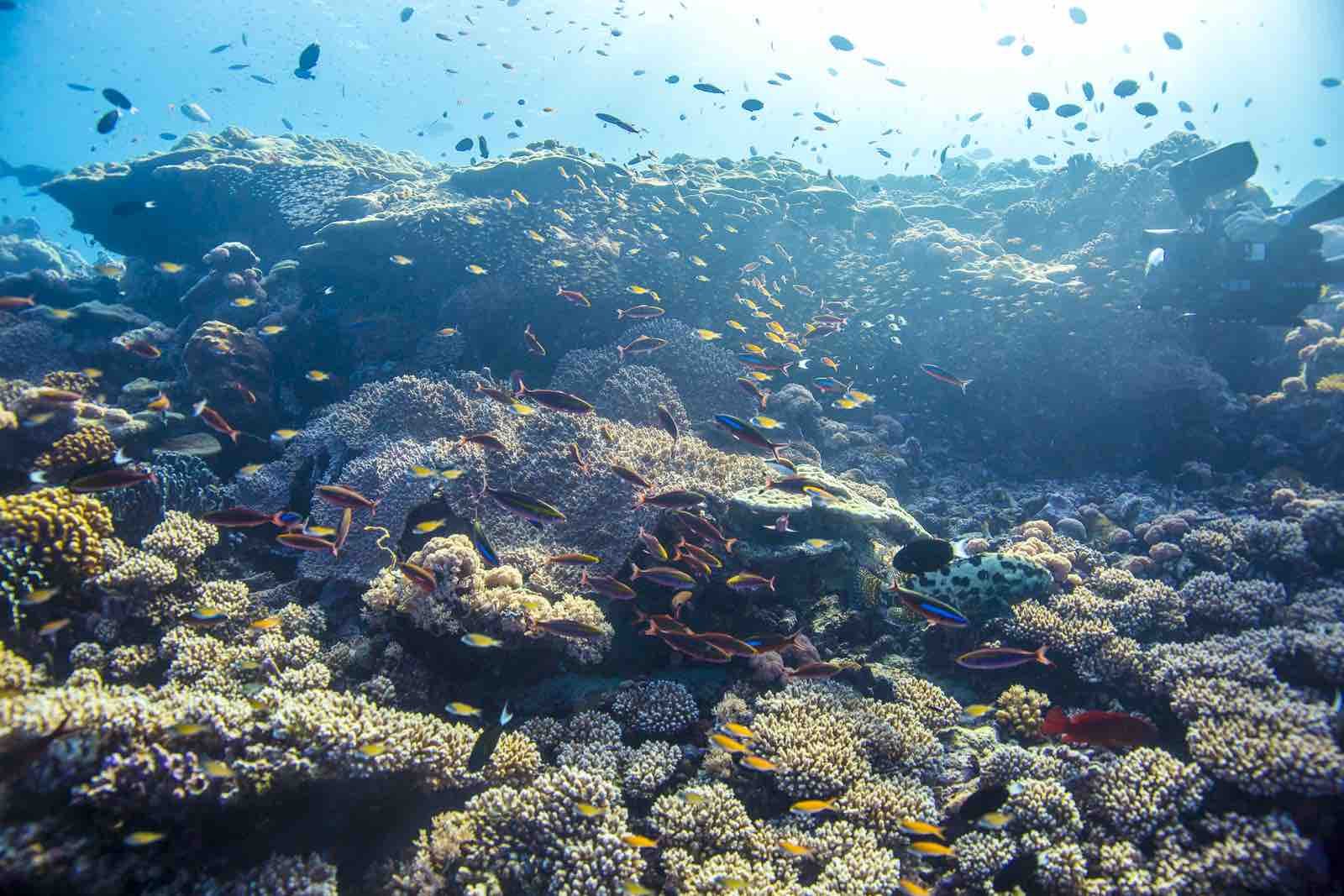 Among the coral reefs of the Chagos Archipelago, schools of damselfish and wrasse dart between redlip parrotfish, angelfish, and blotched stingrays. The fishes’ bodies electrify the tropical waters with displays as colorful as the neon paint strewn across British and Australian tourists at their first full moon party in Bali, nearly 3,000 miles east as the manta swims.

These are some of more than 300 species of reef-dwelling fish living in the Chagos Archipelago, which is part of the British Indian Ocean Territory (BIOT), a 247,000-square-mile region between the East African coast and Indonesia. Padding many of the archipelago’s 58 islands are extensive coral reefs, considered to be some of the most pristine in the world due to their isolation and the territory’s Marine Protected Area, which bans commercial fishing and all other extractive industries.

The region’s relatively natural state gives scientists a rare opportunity to study the dynamics of reef life in the absence of human influence, or at least too much of it. “You can’t get a true baseline now because obviously no system is really pristine,” says Cassandra Benkwitt, a biologist at Lancaster University “but it’s as close as we can get to a baseline of what systems should look like without people, which helps establish goals for what we might want other systems to be restored to.”

Benkwitt’s paper, published with colleagues Sean Wilson and Nicolas Graham in the journal Nature Ecology & Evolution, is among the first to examine relationships between biodiversity and ecosystem function—put plainly, how the variety of species in an ecosystem influences its cycles and the life it produces— on coral reefs. Only a handful of such studies have been conducted, but none on a reef so remote.

The research is also unique in examining how these relationships are affected by multiple stresses, the first of which was a climate change-induced ocean warming event that occurred in 2015 and 2016 across the Indo-Pacific, including the Chagos Archipelago. The heat caused corals to eject the algae living symbiotically inside them, a phenomenon known as bleaching that can lead to coral death. The richness of fish species found in the region dropped by 17.4 percent.

The second stress was the presence of historically non-native black rats, Rattus rattus, whose ancestors took their first steps onto many of the archipelago’s islands as escaped stowaways from colonial ships in the 18th century. Without predators to regulate their populations they became invasive and unfortunately have an appetite for seabird eggs and chicks. “The difference between rat-free versus rat-infested islands is night and day,” Benkwitt says. “While the rat-infested islands are completely free of birds and eerily silent, the rat-free islands are filled with the sounds and smells from the nesting seabirds. It almost feels prehistoric, like stepping foot in Jurassic Park.”

Above a rat-free island, thousands of red-footed boobies, great frigate birds, tropicbirds, terns, noddies, and others of the region’s 18 native bird species arrive home to their white-splattered islets after long flights, their bellies full of offshore squid and fish. The smell of the resulting phosphorus and nitrogen-rich guano is overwhelming, but the nutrients help corals proliferate and increase their tolerance to warming temperatures. These nutrients also allow algae-eating and coral-servicing fish, like the redlip parrotfish, to flourish.

Unfortunately,” Benkwitt wrote in an article about the study, “invasive rats have decimated seabird populations in nearly all of the world’s island chains,” including on islands near half of the reefs her team studied.” Without seabirds and their fertilizing guano, the diversity of fish species dropped by 11.4 percent around islands where rats live.

Benkwitt and her team then examined the relationship between fish diversity and the ecosystem’s properties. For every 10 percent increase in diversity, a reef’s total fish biomass—the sheer amount of piscine life it contained—rose by 15 percent. Its productivity, or the rate at which energy is converted into biomass, increased by 17 percent. If one imagines a coral reef as a giant engine, then Benkwitt’s findings suggest that biodiversity is its fuel.

Other research by Benkwitt’s team suggests that guano-nourished reef ecosystems are quicker to recover after bleaching events. Such results underscore the importance of biodiversity for maintaining healthy reefs—not only in the Chagos Archipelago, but in reef ecosystems around the world. With a more varied assemblage of fish, coral, algae, and other organisms, reefs will have a greater chance of surviving.

Dealing with invasive rats in the Chagos Archipelago is far easier than mitigating global greenhouse gas emissions. In 2017, the Chagos Conservation Trust completed the first successful rat eradications in the archipelago, ridding one island and two islets of rodents. Rats inhabit nearly two-thirds of the region’s islands and more eradications are planned, but invasive rats are not just a problem there. Studies show they have affected 90% of global seabird populations. To this day, invasive rat populations have been successfully eradicated from more than 500 islands worldwide, with one of the largest efforts being another British Overseas Territory, the 1,450-square-mile South Georgia Island.

Still, it’s clear that more is needed to protect seabirds than just rat eradication. Climate change causes massive ocean warming events, like the recent spell studied by Benkwitt that bleached the reefs of the Chagos Archipelago. “Sadly,” says Verena Schoepf, a coral ecologist at the University of Amsterdam not associated with Benkwitt’s study, “global warming is a global issue so we can only address it on global scales, which has proven difficult so far. But anything that reduces global greenhouse gas emissions is important.”

Rats are not the only creatures with problematic appetites. Before commercial fishing was banned in the Chagos Archipelago in 2010, ecologists linked recent seabird declines there to “at-sea changes in food supply”—in other words, overfishing. A global review of competition between commercial fisheries and seabirds for the same fish concluded that “fisheries generate severe constraints for seabird populations on a worldwide scale, and those need to be addressed urgently.” Global seabird populations fell by 70 percent between 1950 and 2010, which, of course, means less guano for the fertilization of reefs and shallow-water ecosystems.

All these stresses stack up, and protecting coral reefs won’t be easy. Still, there’s something wonderful in what Benkwitt and colleagues have found: that biodiversity itself, the schools of fish off the Chagos islands, and the cacophonous seabird colonies above them, is a life-promoting force, one that might yet nourish the reefs of our warming, human-dominated planet.