To Protect the Ocean, We Must Love It

How a life on the water inspired Dona Bertarelli 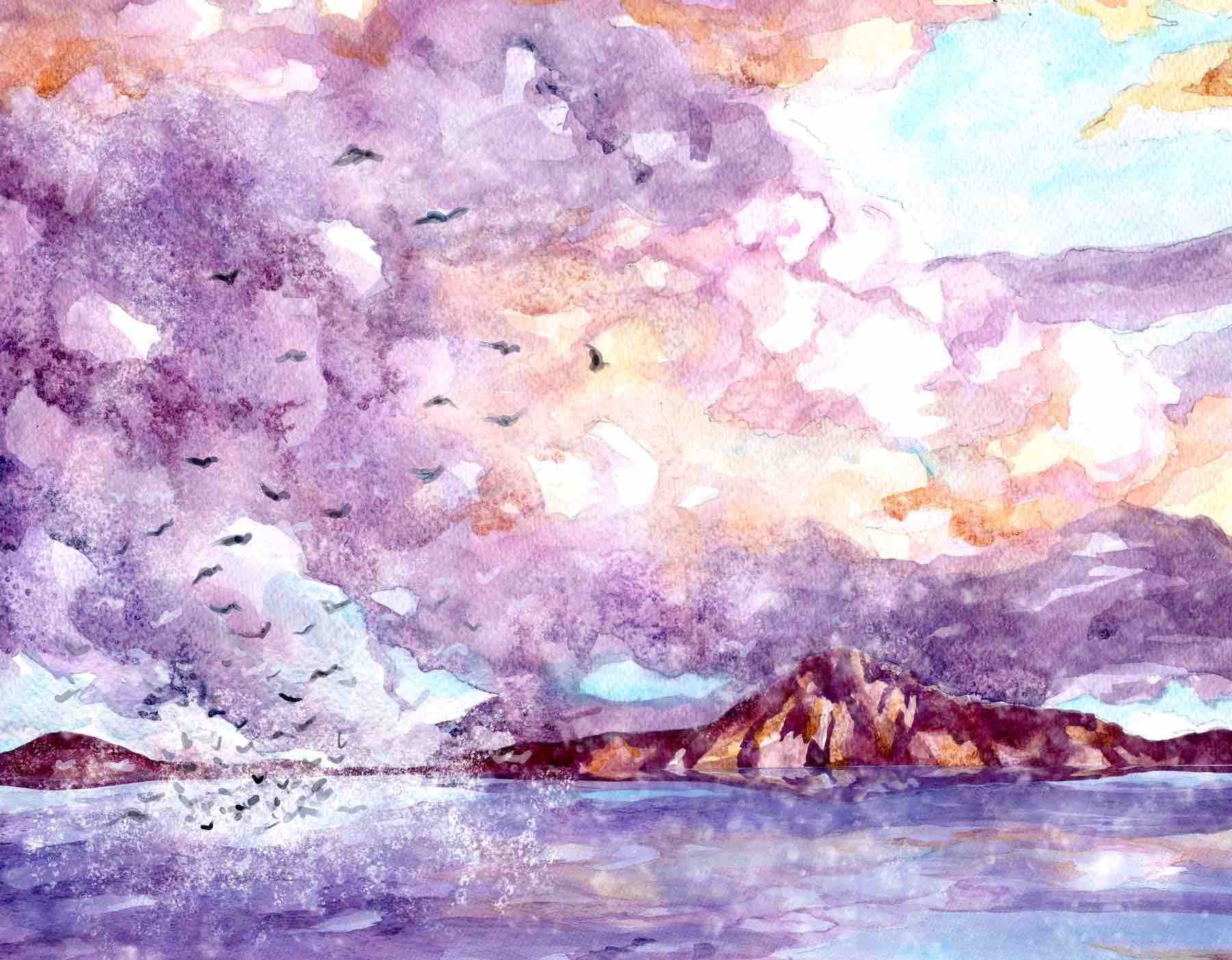 On November 22, 2015 Dona Bertarelli and 13 other crew members aboard Spindrift 2, a 131-foot-long racing trimaran, set sail from Ouessant Island, France. Their destination: a lighthouse in Cornwall, England, about 120 miles north, but they headed south. Bertarelli and her team were chasing the Trophée Jules Verne, a prize for the fastest circumnavigation of Earth in a boat propelled only by the wind and its crew.

The reference mark was set in 1993, with a journey that lasted—apropos of the trophy’s namesake, author of such adventure classics as Around the World in 80 Days—79 days, 6 hours, and 15 minutes. Since then it’s been attempted and failed 24 times, and beaten just eight times. Bertarelli’s journey would take some 29,000 miles, a marathon dance of wind, waves, and physical prowess that ended 47 days, 10 hours, and 59 minutes later. They beat the original record time by more than a month, but fell short of the record at the time by about two days. Bertarelli still made history, though: she became the fastest woman to sail around the world.

The attempt also reinforced her lifelong love of the ocean and its denizens. The daughter of Swiss businessman and philanthropist Fabio Bertarelli, Dona is, with her brother Ernesto, co-chair of the Bertarelli Foundation, which supports marine conservation and science. The foundation has helped establish several marine protected areas—including the Chagos Archipelago in the British Indian Ocean Territory, Turneffe Atoll in Belize, and off the coast of Easter Island—and left a legacy that will last for generations. Last year she became Special Adviser for the Blue Economy to the United Nations Conference on Trade and Development; in that role she will work to make ocean-derived economic activity more ecologically sound.

Recently Nautilus talked to Bertarelli about her passion for the ocean and its protection.

When did you learn to love the sea?

I spent my childhood sailing with my parents and my brother. It’s a wonderful feeling to sail and to be in harmony with nature. My passion for the sea is also shared with my husband, Yann Guichard. Together we created Spindrift, a racing sailing stable.

I’ve had the huge privilege of sailing quite literally around the world with him. There was so much to see and to be taught by the ocean, and our round-the-world record attempt continues to inspire us both.

Was there a particular experience during your youth that made an impact?

One late afternoon, on our sailing boat Pocchina—‘little thing’ in Italian—we were sailing by Monte Argentario, in Tuscany, on our way back to harbor. I couldn’t have been more than four, and my brother, seven. Suddenly the wind picked up, as we were rounding a cliff. Pocchina tilted dangerously. My mother threw me inside and closed the hatch. I remember everything—plates, cups, maps—falling on me.

My father, who was an experienced sailor, tried to lower the sail but couldn’t, and as he was cutting it loose, he almost fell in the water, and broke a rib. My mother, meanwhile, was at the helm, keeping the boat on course, while my brother held on firmly to the roof railing. When I was older, I understood what had really happened, and how dramatic the incident could have been. I was too small at the time to be scared, but ever since I have learned to be humble and respect the force of nature and the ocean, to be cautious, and to anticipate.

Why is the Trophée Jules Verne legendary and why did you attempt it? What did you learn?

Taking part in the record attempt in the winter of 2015 to 2016 was a chance for me to surpass myself and to learn about my capacity to endure—physically as much as mentally—and about the extreme conditions, the remoteness, vastness and beauty of the ocean, and the peace, despite the storms, that you find within yourself. But above all, it was a human adventure. It is when you can only count on one another that the true meaning of teamwork, trust, mutual aid, and benevolence becomes real.

I’ve never felt nature as close and as vibrant as in that perfect moment of unity between land and sea.

When you attempted the Trophée Jules Verne record, what specific experience affected you most?

Rounding Cape Horn remains the most spectacular and emotional moment I’ve ever experienced while sailing. Not least because it had been 30 days since we’d last seen land, and rounding this Cape meant we were back in the South Atlantic, and on our way back home. But above all, for the breathtaking beauty and grandeur of what we saw. It was early morning. The weather, as is rarely the case, was good. The Cape, the sky above, and the water surrounding us were all wrapped under a blanket of pink. Ice and snow were falling into the ocean, thousands of birds were flying around us, and dozens of whales lined up to welcome us back. I’ve never felt nature as close and as vibrant as in that perfect moment of unity between land and sea, and us sailors bearing witness to this precious ecosystem.

Who has inspired you as seafaring heroes and heroines?

There are so many, but when it comes to ocean conservation, clearly Jacques Cousteau and Sylvia Earle.

Jacques Cousteau, because he was a seafarer, an adventurer, an explorer and an inventor—and above all, because he shared the adventure of ocean exploration with a public who would not otherwise be able to explore the depths of the ocean. He created the AquaLung, making it possible to explore underwater for extended periods, and had a great role as a teacher, changing the way in which ocean science was communicated through his documentaries. This is so important, because if you make the science too abstract and technical, you can’t inspire a large audience new to the ocean!

Sylvia Earle, because she’s always been and continues to be such an inspirational voice for marine conservation. She was the NOAA’s first female chief scientist, she’s a National Geographic explorer-in-residence and she’s led hundreds of expeditions and logged more than 7,000 hours under water since the 1970s. She was also the first woman scientist  to descend to a depth of 100ft in a submersible with a lockout chamber—called Deep Diver—that permitted divers to leave and return to the vehicle. The creation of Mission Blue in 2009, and the Hope Spots it designates, has also been key to public understanding of the value of creating marine protected areas.

As pure seafarers, I am inspired by the Polynesians, the most amazing navigators. They are able to read the stars, the currents, the clouds and all the clues the ocean can share, skills gained over generations. This allowed them to sail to some incredibly remote locations in the Pacific and settle on islands like Rapanui (Easter Island).

What has the ocean taught you?

As an offshore sailor you’re exposed to the ocean at its most elemental—and sometimes its most brutal. This is incredibly humbling. There is no forgiving mistakes when facing the power of nature. Nothing can be left to chance. Anticipation is your safety line.

I have also learned the ocean’s essential role for life on Earth. The ocean is truly our life support system. Just think about it. The food we eat, the water we drink, the oxygen we breathe—all come from nature—with the ocean playing a major part. The ocean provides 70% of the oxygen in the atmosphere. It regulates our climate, traps large amounts of heat and absorbs about a third of the carbon dioxide we humans produce, mitigating the effects of climate change. And most importantly, billions of people depend on the ocean for their food—and for their livelihoods.

The ocean is a place of wonder, of beauty, of complexity and of the unknown. The ocean is simply vast. It covers an area of about 360 million square kilometers. That’s two thirds of our planet. And we have only really mapped about 20% in high resolution, so there is still so much more to discover. It was amazing to follow Victor Vescovo’s expedition to dive down into the Mariana Trench in the Pacific Ocean in 2019, and I think this also captured the public’s imagination, sharing this feeling of discovery.

About 15% of all species on Earth are in the ocean, making its biodiversity an incredibly vital part of our ecosystem – and we haven’t even be able to describe all the marine species! Everyone has their favorites, but one species merits our attention. Sharks are too often misunderstood, yet they have such an important role, as apex predators, to regulate the marine ecosystem. There are more than 1,200 species of sharks and rays, and more than 25% of these are threatened with extinction. Did you know that some species of shark lay eggs, while others give birth to live baby sharks? Or that they reproduce slowly and late in life, meaning that it’s harder for them to recover, bearing in mind that more than a hundred million are killed each year?

This brings me back to your question: what has the ocean taught me? If anything it’s taught me that the ocean’s importance to life on Earth is not well known to the general public, to public institutions, the private sector and even to our politicians. And that we need to understand the ocean in order to love it and wish to protect it.

You talk about the ocean’s wonder, beauty and complexity. Can you give a personal example?

While on board Spindrift 2 during our first Trophée Jules Verne record attempt, leaving behind the North Atlantic and sailing past the Doldrums into the South Atlantic, I finished my shift in t-shirt and shorts, seeing flying fishes. I woke up three hours later for my next shift, to wear mid-layers, waterproofs and to see albatrosses. In just a few hours, the air and water temperature had dropped significantly. This shows how vast yet interconnected each ecosystem is, and what a change in its balance can mean to the species which call it home.

The Bertarelli Foundation is a partner in Nautilus Oceans.