To Save Sharks, We Must Understand People

In Sri Lanka, laws are supposed to protect sharks—but what if people won’t obey the laws? 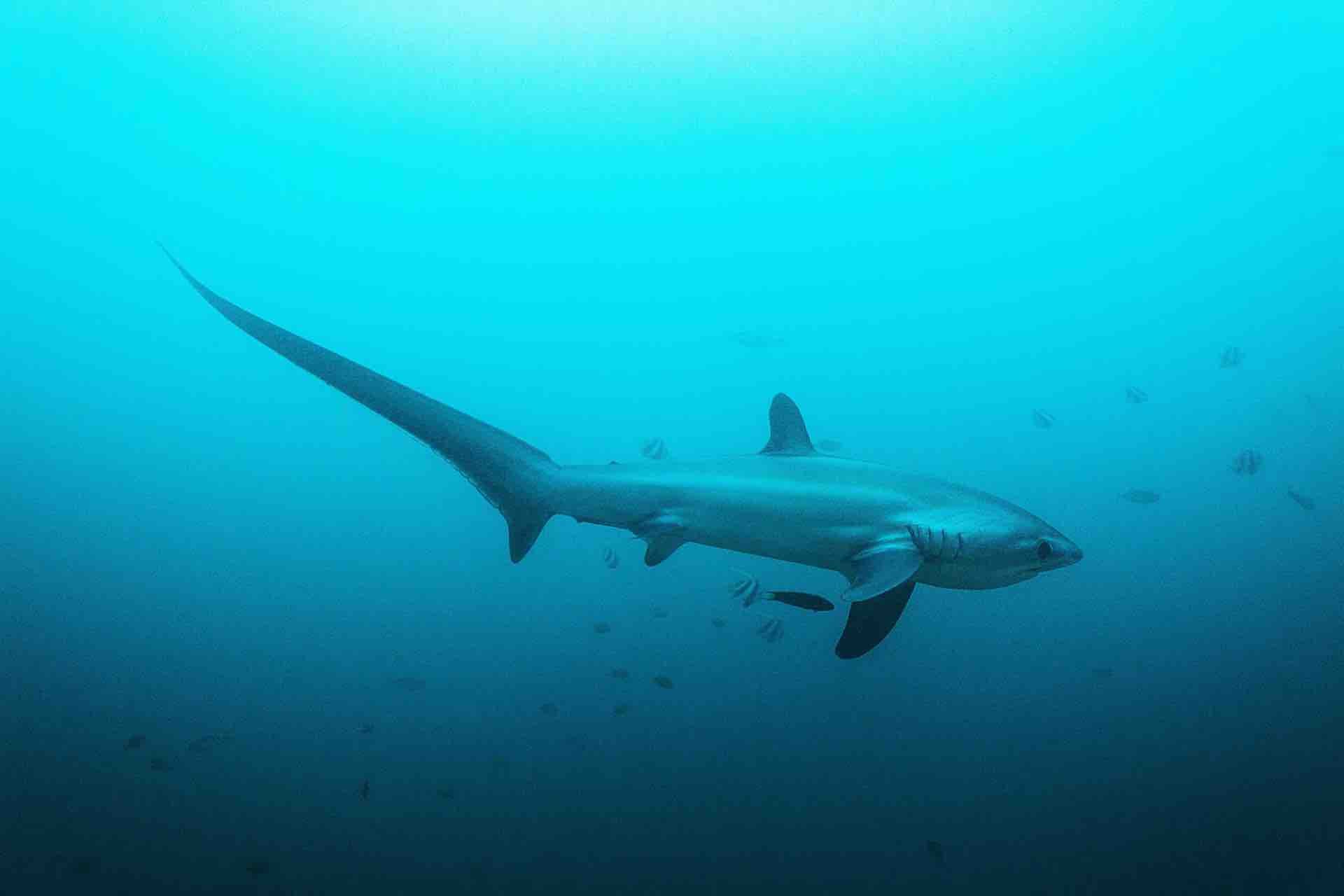 The frantic scenes of a morning fish market in Sri Lanka can be overwhelming to the uninitiated. Starting as early as 3 AM while conditions are still cool, hundreds of fishers unload their catch onto the cacophonous dock. Laid alongside the mounds of regular species like tuna and billfish, there are also the more conspicuous bodies of sharks. Silkies, threshers, makos and tiger sharks—some as long as two men—are swiftly slapped onto the concrete at people’s feet. Some of these species are legal to catch, but the killing and sale of others, like thresher sharks, is outlawed.

“It can be a bit emotional,” says Claire Collins, a biologist from the University of Exeter in the United Kingdom, “because you also know how potentially endangered they are.”

As apex predators, sharks are crucial to the function of ocean ecosystems. By regulating populations of other species through predation, sharks prevent individual species from destabilizing their environment and depleting its resources, whether that be in seagrass meadows or coral reefs. This makes sharks important for maintaining ocean biodiversity.

Globally, however, sharks are in trouble. Commercial fishing has decimated shark populations, either by targeting them or just by hauling them in as incidental bycatch. This kills an estimated 100 million sharks each year, a rate that threatens the ability of many species—especially larger, slower-growing ones—to recover. Global shark populations have declined by an estimated 90 percent since the early 20th century and, in the Indian Ocean, species including silkies and threshers have declined by another 90% during the first two decades of the 21st century. A survey of coral reefs in 58 countries found that sharks are now completely absent from one-fifth of those. When comparing current populations of reef-dwelling sharks, Sri Lanka is counted as one of the countries with the most depleted populations.

These declines continue despite increases in conservation measures to protect sharks. That points to a disconnect between what protective policies say on paper and how they play out at sea. In Collins’ mind, failing to understand the complex social and economic drivers behind illegal shark fishing is part of that disconnect. Including fishers’ perspectives, which have traditionally been neglected in global fisheries management, could help conservationists craft policies that fishers are more likely to observe. “Management only works if you actually have people complying with it,” Collins says.

“Management only works if you actually have people complying with it.”

To investigate the attitudes and experiences of fishers, Collins teamed up with Oceanswell, a Sri Lankan marine conservation NGO. They made it possible to overcome the greatest challenge posed by this type of research: it depends on fishers’ willingness to talk. Collins relied on Oceanswell researchers, who were familiar with the context and spoke Sinhalese, to approach fishers and gain their trust. Interviews were conducted mainly by Collins’ research partner Isuru Wijesundara, a student at the Ocean University of Sri Lanka who works with Oceanswell.

“We have to face a high degree of rejection from fishermen,” says Wijesundara, because they  fear “that researchers may use the data to negatively impact their livelihoods.” He approached fishers at two market sites on Sri Lanka’s south and west coasts (though to protect fishers, the team can’t disclose where these are). In some cases it took weeks before fishers trusted him enough to talk.

Most interviewees captained medium-size vessels that venture into the deeper waters of the Indian Ocean; while some shark species are legal to catch in these waters, others are protected by laws. Those include the thresher shark, named for the distinctive whip-like tail they use to stun their prey, whose capture was banned by the Sri Lankan government in 2012.  “It was only once we started speaking to people, that we realised this [ban] has all these different reactions and consequences that fishers wanted to discuss,” Collins says.

Their repository of one-on-one surveys, focus group discussions, mapping, and catch data gathered directly from the docks ultimately produced a detailed picture of fishers’ habits and their responses to conservation policies. Those findings were published in the journal Marine Policy. The study shows that while the 2012 ban did halt targeted fisheries of thresher sharks, many fishers continued hauling them in as unintentional bycatch while fishing for other species. Though the ban threatened imprisonment or fines for not returning bycatch to the sea, fishers revealed that they kept landing and selling the sharks.

The research exposed a hard truth about the ban’s ineffectiveness. It also illuminated the nuanced economic drivers motivating the fishers. While the international shark fin trade is usually viewed as a driving force behind illegal shark fishing, fishers told the researchers that in this case they were simply meeting a local demand for thresher shark meat. Subsequent interviews found that 75% of fishers say they benefit from selling bycaught sharks.

In the bustling markets they frequented, Collins and colleagues also found that shark meat was generally more expensive and consistently-priced than other fish, and offered fishers a form of insurance against the vagaries of their trade. “Even during COVID, even during the 2019 terrorist attacks, sharks remained at a constant price,” Collins says.

This seems to paint a picture of fishers driven by economics to break environmental laws. Yet  there’s more going on at the edges of this frame. Another revealing statistic from Collins’ upcoming research is that 72% of fishers surveyed say they are satisfied or extremely satisfied with their income. They are not simply impoverished people chasing a desperately-needed extra buck.

“We shouldn’t be making naive assumptions that these are poor people, and because they need money, they illegally take animals,” says Ana Nuno, Collins’ PhD supervisor and a conservation scientist at the University of Exeter, where she researches the social aspects of illegal activity. “It’s so much more complex than that.”

Perceptions of risk also play into decisions. Fishers who have never had a brush with the law are more likely to rate illegal fishing as lower-risk, and therefore participate; the opposite holds for people who’ve been fined or imprisoned before. “How people respond to economic incentives really varies, depending on their unique contexts,” Collins explains. Focusing only economic drivers risks obscuring other factors that shape behavior.

What can be done with all that nuanced information? To Collins, having this more granular view helps reveal flashpoints where tailored interventions could replace failing approaches.

Instead of blanket bans on catching thresher sharks, fisheries managers could help fishers upgrade to gear that reduces shark bycatch. When bans are applied, fisheries managers should be realistic about the economic losses fishers might incur, and perhaps work with fishers to diversify their sources of income. After all, getting fishers on board with conservation means protecting their interests, too. Since the regional appetite for shark meat fuels illegal activity, targeted consumer awareness campaigns could also help to reduce demand.

It’s not just Sri Lanka where this socially-inquisitive approach to shark conservation has gained a foothold. In India, wildlife biologist and geographer Divya Karnad has investigated the social drivers of shark fishing in the states of Gujarat and Maharashtra, finding that a national ban on shark finning — in which fishers cut off a shark’s fins and discard the body — has had little effect on the illegal trade there.

“The problem is that almost no one in India actually fins sharks, because the meat has value. So these policies are very out of touch with the reality of what fishermen are doing,” says Karnad, who is an associate professor of environmental studies at Ashoka University. In a study published earlier this year in the journal Ambio, Karnad and colleagues emphasize that domestic shark meat markets require “nuanced local approaches that diverge from global shark conservation priorities.”

Nuno echoes that sentiment. “I think there’s a need to start locally,” she says. “Often, a conservation program gets started or a policy is designed, but without the full understanding of the local context. In an ideal scenario, this type of information would be collected even before those policies and interventions are designed.”

Happily, both Nuno and Collins say that they’re noticing a gradual shift in the field towards this bottom-up approach, as shark researchers in countries from Indonesia to Bangladesh are increasingly centering fishers’ views in their work. Collins hopes this trend catches on, especially since sharks migrate and need to be better-protected across their entire ranges. This type of research isn’t expensive, says Collins. Researchers simply need to be inquisitive and take time to build up fishers’ trust.

“The way that we use these species is going to determine their future,” she says. “So understanding why we practice the behaviors that we do is just completely fundamental.”

Research by Ana Nuno, Claire Collins, and Isuru Wijesundara was funded by the Bertarelli Foundation. More information about its marine science programme can be found at www.marine.science

The story has been amended to better reflect the contributions of Oceanswell and Isuru Wijesundara.