To Save the Ocean We Need Less Talk, More Action 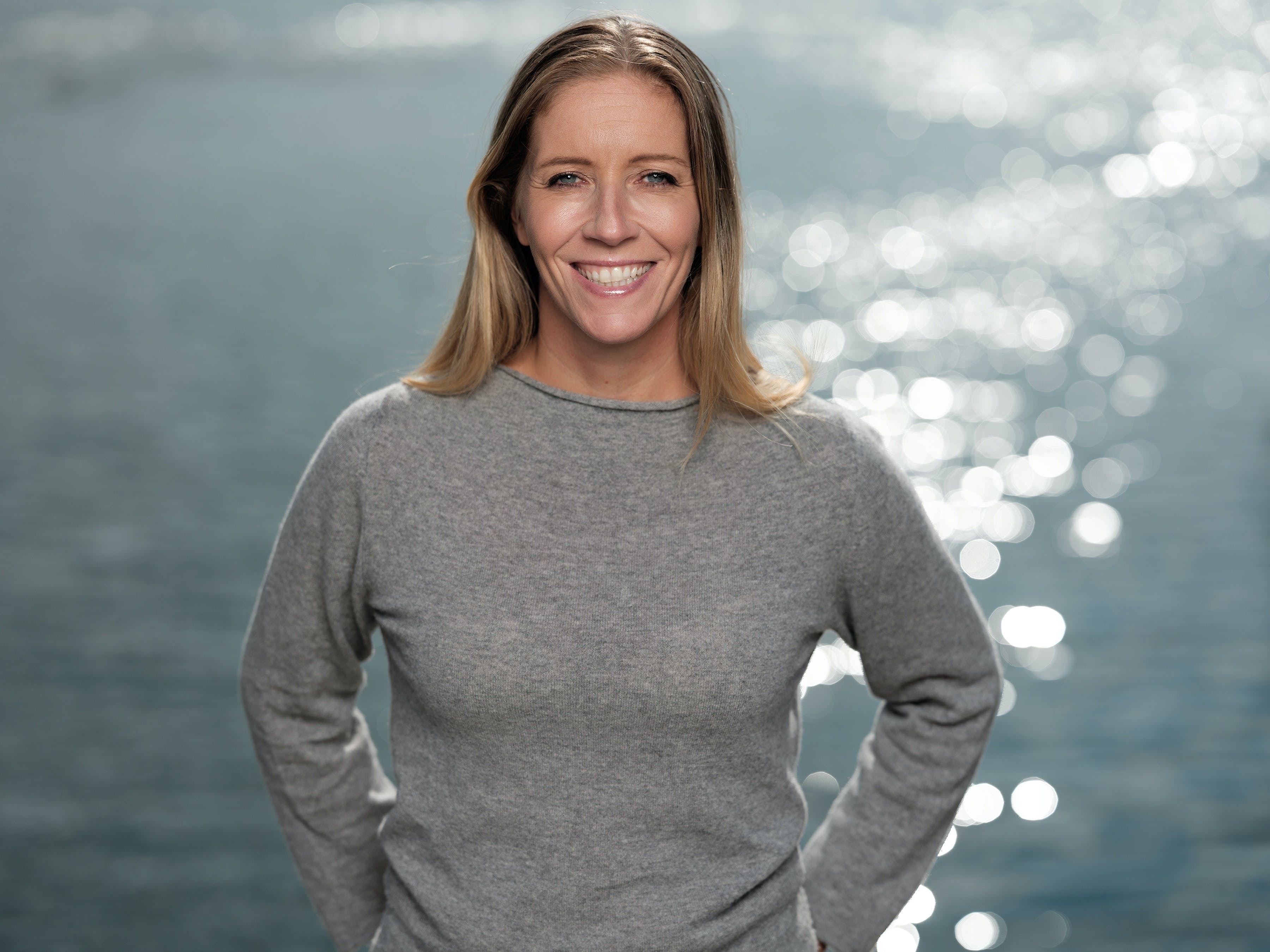 In May of 2017, Norwegian industrialist Kjell Inge Røkke promised to give away nearly all of his $2.4 billion fortune. He started by founding REV Ocean—the name of both a conservation initiative and the custom-built ship that would carry it forward.

The 600-foot-long REV Ocean yacht, the world’s largest Research and Expedition Vessel, should be ready for operation in 2022. It sports cutting-edge scientific instrumentation, laboratories, and its own remote-operated and autonomous underwater vehicles. Røkke calls it “a platform for gathering knowledge,” and at the ship’s figurative helm will be Nina Jensen.

Originally trained as a marine biologist, Jensen previously served as secretary general of World Wildlife Fund Norway. There she fought for fisheries reform and pushed for the nation’s $1 trillion USD pension fund to divest from fossil fuels. “This had global ramifications,” says Jensen. “A lot of investors worldwide look to the Fund in terms of the investment decisions that they make.”

As REV Ocean’s CEO, Jensen oversees their search for solutions to climate change, overfishing, and plastic pollution. Rather than sponsoring their own in-house researchers, REV Ocean will make their resources available to scientists, innovators, and conservationists from all over the world. “We need to imagine the unthinkable,” she says, “and come up with solutions that are probably much more creative than those that we’re working on today.”

Nautilus talked to Jensen about REV Ocean’s work and the future of Earth’s imperiled ocean.

It seems there is a lesson to be learned from what’s happened with the pandemic in respect to the environmental crisis. What do you think of that?

There seems to be this tendency of wanting to undermine scientists and leading experts who are sounding the alarm on critical issues, probably because the dimensions of the potential crisis are sometimes difficult to accept. So that’s sort of the first line of response—and that’s the same for a virus outbreak like this, the dramatic loss of nature, and climate change.

What is it going to take to actually get some kind of global action on climate change? Or is it a dream?

I think most people now finally realize there is a problem. I think people just feel like the scale of the problem is so massive that how can they impact it? They’re just expecting somebody else to fix it—but nobody else will. It’s you and me, us, we have to fix this. That’s the thing. And I think there has to be much stronger global transparency and accountability and accountability in terms of emissions, and an increasing use of the taxation system in terms of dealing with it.

As an example, I think we need to start holding investors personally accountable for the investments they’re making when it comes to climate and environmental destruction. There should be a much higher degree of accountability and transparency in terms of what we are investing in and the associated impacts of those investments. Exactly how to do that, I must admit I haven’t really sorted out yet—but I think that could be a critical part of the solution. And making sure that climate change and environmental destruction to a degree is recognized as a crime, like genocide or war crimes.

A lot of institutions are taking their investments more seriously regarding the environment, and they’re divesting from fossil fuels, but how would you hold investors responsible for their investments? That seems like quite a leap. Is it possible?

I think anything is possible. And to really solve the climate change problem we need to imagine the unthinkable and come up with solutions that are probably much more creative than those we’re working on today. But given that we’re also moving so rapidly forward with emissions still rising, and we’re nowhere near reaching the two degrees Celsius target, probably we are way beyond that already. Meaning that we’ll also need to develop carbon-negative solutions to really make sure that we are taking out what we’ve already emitted. But yeah, I would say anything is possible, and it has to be possible, because we’re way beyond traditional measures to solve this.

Anything is possible, and it has to be possible.

There are so many different climate models out there, some more serious than others, some relegating the cause to natural cycles rather than human action. Why all the discrepancies, do you think?

Our entire society is built around a system that is basically flawed. We’re thinking that we can continue with economic growth into eternity, and that that’s what will also make us happy and healthy and thrive—which is obviously not right. And it’s basically a system that is catering to, in many ways, a select few who are becoming increasingly wealthy at the expense of the rest of the population and the long-term survival of humanity.

Completely changing the societal system that we’ve built our modern ways of living and doing business around is obviously really, really complex and difficult. We would need to change the way that we run and do future businesses, and a lot of people, particularly those who are the biggest climate deniers and skeptics towards this, are the ones that are facing the biggest economic consequences of those changes.

Which is why you’re usually seeing the biggest amount of climate skeptics and deniers in oil-producing countries, for example, and why you’re seeing that those who have spent a lot of money and resources on trying to undermine climate science are coming from the fossil fuel industries.

What do you think the state of the ocean will be in 20 years?

I’m an eternal optimist. We’ve lost more than 40 percent of life in the ocean in just the last 40 years—but if you look 20 years forward, I would hope that we’ve been able to reverse that situation, that we’ve rebuilt at least a big part of what we’ve destroyed, that we’re seeing flourishing ecosystems all over the world, particularly linked to kelp forests, mangroves, and sea grasses that are also essential nature-based climate solutions and soaking up probably 40 to 50 times more CO2 than land-based forests while replenishing depleted fish stocks. We would also keep plastics out of the ocean and not use the ocean as a massive waste dump.

What do you think is the worst-case scenario if governments and people don’t do something?

That the ocean continues to become more acidic, warmer, and less productive. That additional fish stocks will be on the verge of total collapse, meaning that we will be able to harvest even less food from the ocean—which will also be a massive problem in a future where climate change will have a dramatic impact on land-based food production. And that we’ll see complete shifts in ecosystem functioning around the world, with new species taking over. Just a completely different ocean from what we know today, basically.

Based on what the science is telling us, we will also have a dramatic increase in oxygen-depleted areas, which will mean less-productive seas and also an additional decline in key species. And, of course, the loss of entire coral reef systems that have been around for thousands of years and that are some of the most magnificent things on this planet that we’ve managed to destroy in pretty much one generation.

What do you think will be the most important contribution that the REV Ocean ship and all of your efforts can make?

I hope and think that it will be to take us into concrete action. I mean, there’s so much talk about environment, about climate change, but not enough practical action. We know already enough to get moving—but what we’re not doing well enough is to collaborate, share data, experiences, solutions, and work together to improve the situation. So I really hope that the REV Ocean vessel can be a convening platform that brings together a wide variety of stakeholders, backgrounds, geographies and people to really get moving and fast track the solutions. And that we’re also able to pair the solutions with funding and investors, so that it can be replicated and scaled worldwide.

You come from a family of very strong women. Can you tell me a little about your great-grandmother?

You’ve done your research so well. She was the first female factory inspector in Norway. And she was definitely a person who would challenge the status quo and the society’s norms when it came to women. She was also fighting for women’s rights all along. She challenged the concept that women had to wear skirts, that they couldn’t sit with their feet across on a bicycle—things that seem absolutely ridiculous to us in this day and age. And of course she also promoted education and for women to actually take a degree and have voting rights.

She was an inspiration for all of us coming after her. She also left a legacy of commitment and a bit of pressure in terms of really making a difference in the world, because she certainly did in her time. And to be honest, I think if she was alive today, her mission would be the environment because there is no bigger issue that society is facing today than the environmental destruction that we’re seeing all over the world.

Do you think women have a different perspective on science?

Not that I’ve picked up on. I think the biggest problem is that we haven’t been able to recruit enough women into the science fields. And certainly had a society that has been shaped in a way that has made it more difficult for women to engage in various scientific fields. Thankfully that has largely changed and will continue to change. And I’m a firm believer of diversity in its full capacity, whether it’s gender, age, geography, or background, if we are to solve the big scientific mysteries and societal challenges.

One last question: What was your most inspiring ocean experience?

Swimming in an Arctic fjord side-by-side with an eight-meter-long male Orca. It was like the Earth stopped when he just swam next to me and looked me in the eye. I just thought that there is nothing more spectacular or impressive than the ocean and its inhabitants, and this is certainly what I want to spend my life on making a difference for.