Top 8 Places to Look for Life in our Solar System

From the Europan oceans to the Jovian clouds, life has plenty of places to hide. 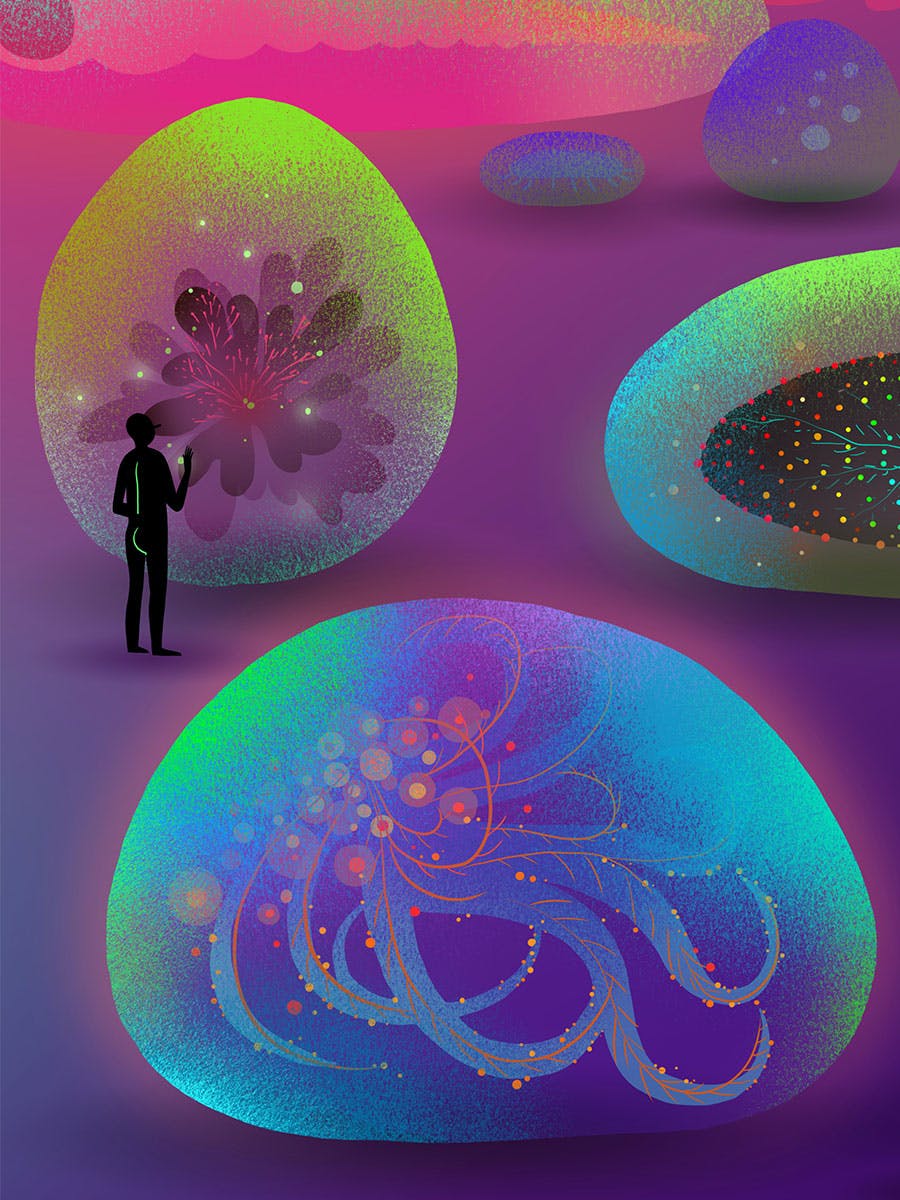 Life might be based on silicon rather than carbon and on ammonia rather than water. It might have adopted an information system different from DNA and RNA. It might even develop through means other than Darwinian evolution. But there is one quality that must be common to life anywhere: thermodynamic disequilibrium. Without that, nothing is “alive” as we understand it. Stripped to its essence, life is a system devised by nature to dissipate energy—to do something with all the raw energy that a planet has, be it from sunlight pouring down on the surface or chemical reactions in the rock, seas, or air.

Today the Red Planet is a frozen desert, its atmosphere so thin that water ice instantly turns into vapor when heated, and too thin to shield the surface from intense solar and cosmic radiation. Earlier in its history, though, Mars may have been more hospitable, with thicker air, balmier temperatures, and flowing water. It’s during these very early years that scientists think life could have arisen on Mars. If so, life might still cling on deep underground. “There could still be liquid water deep down in the crust, so maybe there’s primitive life that feeds off hydrogen,” says Jonathan Lunine, director of the Center for Astrophysics and Planetary Science at Cornell University. Those organisms would explain the methane that scientists have observed in the Martian atmosphere.

The largest asteroids are so big that they are classified as dwarf planets. They undergo heating during their formation, which allow geological layers to separate into a core, mantle, and outer layer. Internal heating causes ice to melt into liquid water, which then interacts with minerals like olivine and pyroxene and releases even more heat. In fact, runaway heating can cause the interior to become too hot for life and its precursors, at least for a time, although interesting chemical reactions could still happen close to the surface. “The surface of Ceres shows minerals, called phyllosilicates, that have been altered by liquid water, and that’s pretty exciting,” Lunine says. “Now whether there’s still liquid water on the inside or not, we don’t know.” Ceres is currently being explored by the Dawn spacecraft.

At the surface of Venus, the average temperature is 860 degrees Fahrenheit and the air pressure is 90 times that on Earth’s surface. But the planet may not always have been so grim. “Its early history is unknown to us,” says Penelope J. Boston, director of NASA’s Astrobiology Institute. “Was it habitable early on?” It is not out of the question that life persists there today. Scientists have investigated the possibility for life in the clouds of Venus. “There’s tons of UV light coming in, so you’ve got all this photochemistry going on,” says Caleb Scharf, director of astrobiology at Columbia University. “You don’t even have to do photosynthesis; you can just eat what’s being formed in the atmosphere.” In 2006, a NASA study group concluded that while it couldn’t rule out life in the clouds of Venus, the likelihood was extremely low. Organic molecules, let alone entire organisms, would never be fully insulated from the extreme surface conditions, because atmospheric downdrafts would occasionally drag them to lower altitudes.

After the Pioneer spacecraft sent us images of Jupiter in 1973, astronomers Carl Sagan and Edwin Salpeter speculated about life on the gas giant. Jupiter’s atmosphere is so deep and dense that it is more ocean than atmosphere. Accordingly, Sagan and Salpeter imagined a marine ecosystem of gas-bag “floaters” (like plankton), “sinkers” (like fish), and “hunters” (like larger predators). They calculated that hunters could grow to be several kilometers across. Their paper inspired Arthur C. Clarke’s story “A Meeting with Medusa,” which pictures giant jellyfish, bioluminescent air plankton, and manta rays the size of a football field. Likewise, Ben Bova featured balloon-like creatures and gossamer spider kites in his novel Jupiter. Unfortunately, the Galileo probe descended through Jupiter’s atmosphere in 1995 and found no evidence of the complex organics needed for biology.

Dirk Schulze-Makuch at the Technical University of Berlin thinks Jupiter’s moon Europa is the only other place in our solar system besides Earth that could have complex life. It has a subsurface ocean as well as organic molecules that could come together in interesting combinations. Jupiter’s intense radiation field breaks water molecules at the surface into hydrogen and oxygen, and the latter could seep down into the ocean to drive chemistry. Schulze-Makuch has studied how life sustains itself at hydrothermal vents on Earth through methanogenesis, whereby hydrogen and carbon dioxide are ingested and methane is expelled. Based on the size of Europa—its ocean has twice the volume of Earth’s—and the likely conditions of hydrothermal vents there, he estimates there are enough resources to support a predator/prey food web. “The predator would be the size of a brine shrimp, and it would need about an Olympic swimming-pool sized area to feed off, to get enough food,” he says. But Jim Cleaves, vice president of the International Society for the Study of the Origin of Life and a visiting scholar at the Institute for Advanced Study in Princeton, is less than optimistic: “I suspect—this is an informed hunch—that the energy flux in icy worlds is not high enough to support ecosystems with many trophic levels, so life, if it exists, can not get too complex.” Ultimately, it will take a probe to settle the question.

Saturn’s smoggy moon Titan has plenty of energy for life, despite its average surface temperature of –290 degrees Fahrenheit. Photochemical reactions in the atmosphere produce acetylene and molecular hydrogen. “At Earth’s normal temperatures, acetylene and molecular hydrogen is an explosive combination,” Scharf says. “On Titan, it still reacts, but it’s not an explosive reaction. So it [could be the basis of] a potential metabolism.” Sagan and his colleagues published a study about the prebiotic chemistry that might be possible on Titan in 1986, long before the Cassini mission sent the Huygens probe down to the moon’s surface. The probe wasn’t really equipped to look for life, but did corroborate earlier hints that liquid methane and ethane play the same role on Titan that water does on Earth. While we haven’t found evidence for life there, it remains a tantalizing thought. The main Cassini spacecraft also detected a subsurface ocean like that of Europa.

Saturn’s tiny ice moon Enceladus also has an underground ocean, which has about the same volume as Lake Superior, and water continuously erupts out into space from the moon’s south polar region. The Cassini spacecraft flew right through the geyser-like plume seven times and detected grains of silica sand, as well as water ice grains containing salt—a mixture that demands a vibrant geochemical system within. “The only plausible way you get that is if the water at the base of the ocean is cycling through the rock,” Lunine says. “Silica leaches out of the rock, into the hot water. Then as the water comes back out into this ocean and inside this tiny vent, it cools down, and the silica precipitates out. So what Cassini has shown us is that this is a habitable environment. The ocean is salt water, containing organic molecules, and it cycles through hot rock.” Cassini’s instruments didn’t have the resolution and range to detect biomolecules, so Lunine wants to send another mission there to fly through the plume again. “The prospects here are incredibly exciting,” he says. “We should expect life to be there. Now, if we don’t find life, then there will be a whole laundry list of questions. Is it too small? Does the ocean freeze over? Is life a special case?”

Small though they are, comets have the basic necessities for life. Missions such as Rosetta have detected the amino acid glycine on comets, along with other organic molecules and biologically important elements such as phosphorus. Comets probably have had internal radiogenic sources of heat, at least in the distant past. In addition, water periodically melts on the surfaces of comets that pass close enough to the sun. That said, comets are not the most hospitable abodes for life. “The problem is that comets just don’t last very long,” Lunine says. “The ones that fly close to the sun and have this spectacular coma and tail, after dozens or maybe a couple hundred orbits, they’re done. So maintaining that environment suitable for life over billions of years is just really unlikely in comets.”

The planets of our solar system, as diverse as they are, do not begin to exhaust the possibilities. Schulze-Makuch notes that because Earth orbits a G-type star, we receive light wavelengths in the visible spectrum. This has led to eyesight in humans and other animals, and some of those animals, like bees, can even see into the UV spectrum. Creatures on other planets would likewise develop senses that respond to their particular environments. And that is just the beginning of how they might differ from life as we know it. “I’m imagining living floating islands on water worlds with high gravities that do the long term geological cycling for their planet, because there are no plate tectonics,” says Boston. “I’m imagining worlds that are always lit on one side and never on the other, having whole ecosystems that live in the twilight zones at the terminators. I can imagine a life form that covers a whole planet … The fact that we can imagine such far out things means that if we somehow, someday, stumble upon such things, we might actually recognize them for what they are.”