Jellyfish have mesmerized people for millennia, and much remains to be learned about them. 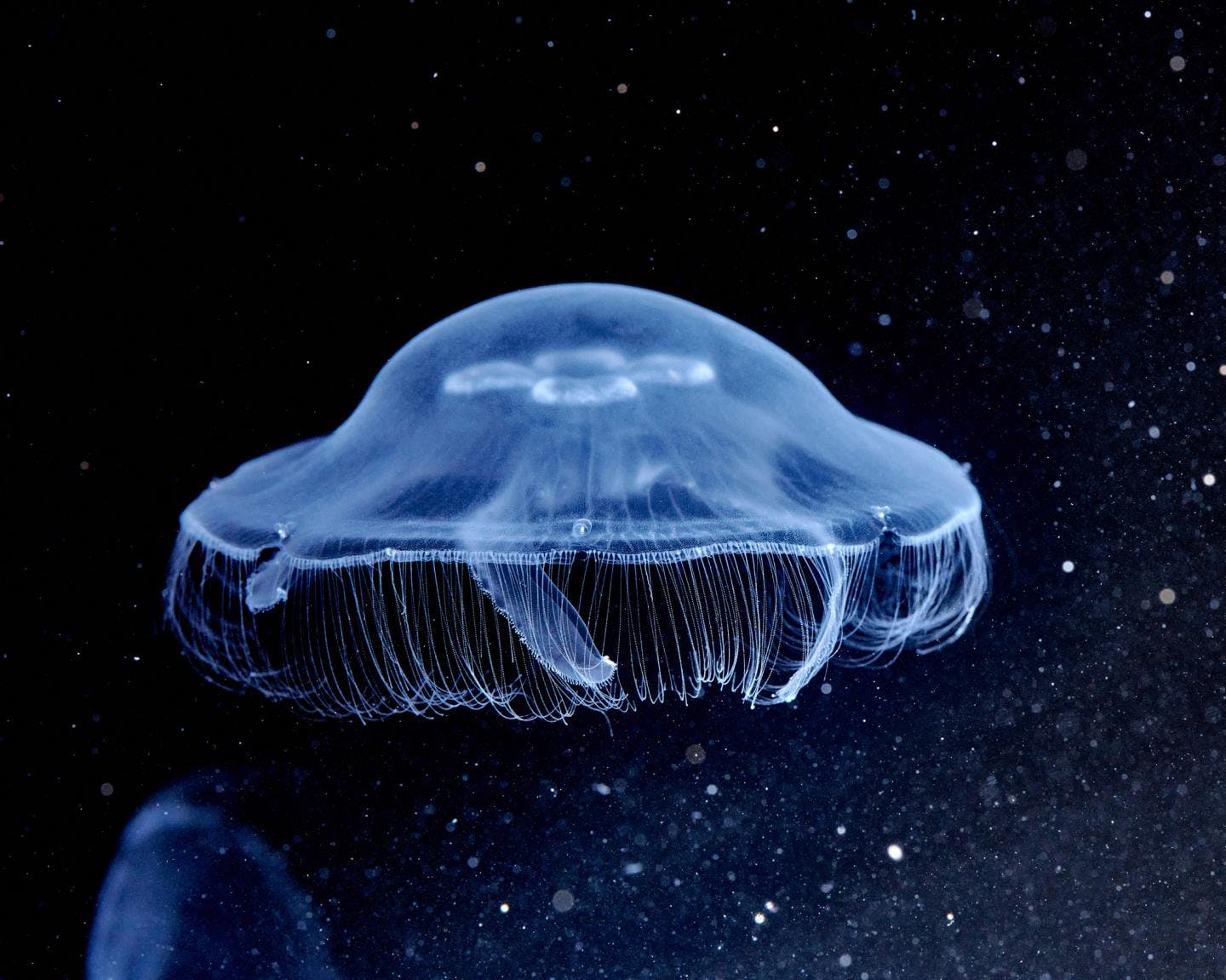 It was in 1752 that Linnaeus gave jellyfish the alternative name ‘medusa’ from the Greek myth of the same name. The term was well chosen. The bell of a jellyfish is a reminder of the head of the Gorgon sister, with its tentacles, like snakes, substituting for hair. Both the mythical Medusa and her animal counterpart were capable of causing paralysis and even death.

In the version of the Medusa myth found in Ovid’s Metamorphoses, Medusa, one of three Gorgon sisters, was originally depicted as a great beauty whose attractive powers did not go unnoticed. Her hair was only transformed into serpents by the goddess Athena as a punishment. Medusa had been ravished by the sea god Poseidon in Athena’s own temple and because the temple had been defiled, Athena gave Medusa the power to change any human who looked upon her into stone. Perseus, the son of Zeus and half-brother of Athena, was asked by Polydectes to secure the head of Medusa. Instead of gazing on the Gorgon sister and risking being petrified, Perseus used the reflection on his shield to guide him while removing Medusa’s head with his sword. From her decapitated torso sprang two children, Pegasus, a flying horse, and Chrysaor, a warrior with a golden sword. The transformative powers of Medusa’s head were retained following its separation from the body and when Perseus laid down the head on the seashore, the escaping blood was said to be the origin of red coral (intriguing, knowing the close relationship that exists between jellyfish and coral).

Caravaggio’s depiction of Medusa, painted towards the end of the sixteenth century, echoes her destructive yet beautiful power while another painting, initially thought to be by Leonardo da Vinci, was to inspire a famous poem by Shelley:

’Tis the tempestuous loveliness of terror;
For from the serpents gleams a brazen glare
Kindled by that inextricable error,
Which makes a thrilling vapour of the air
Become a [ ] and ever-shifting mirror.
Of all the beauty and the terror there-
A woman’s countenance, with serpent locks,
Gazing in death on heaven from those wet rocks.

A more up-to-date version of Medusa is seen in Frank Moore’s painting To Die For. It features the model Kate Moss, her severed head alive with serpents. It was a painting commissioned by Gianni Versace, who never saw it since he was killed before Moore had completed the work. Moore himself died prematurely of AIDS in 2002, aged 48. The picture featured in an exhibition in New York called Toxic Beauty: The Art of Frank Moore.

In her poem ‘Medusa,’ Sylvia Plath successfully combines the mythical creature and the sea animal. Written shortly before her own death, it portrays her mother, with whom she had a difficult relationship, as a destructive monster clinging to her by a ‘cable’, akin to a jellyfish tentacle, and intent on controlling, indeed paralysing, her. It is as though Plath felt the need to exorcize her mother from her life in order to achieve some emotional distance, as well as to afford her greater freedom to write and compose. Plath could be said to have used the device of the snake-haired Gorgon to describe her own internal image of a monstrous mother. Ironically, her mother shared her first name with that of a common genus of jellyfish, Aurelia.

Freud came to regard Medusa’s head as a symbol of castration. In a short, posthumously published essay, ‘Das Medusenhaupt’, he equates decapitation with being castrated, arguing that when a boy views female genitalia for the first time he suddenly realizes the possession of a penis cannot be taken for granted, leading to a specific anxiety about castration. In the same way, glimpsing the Medusa’s head causes a male observer to be struck dumb, on the one hand fascinated by what he sees and, on the other, paralysed with fear.

The Medusa myth, with its built-in ambiguity (deadly but fascinating), has served to reinforce our own ambivalence towards this sea creature. It may also have created a reluctance on the part of scientists to work with these animals. There is however no doubting that, when seen in its natural environment, the jellyfish displays that other, more positive quality, an ability to hold our attention, indeed to fascinate. This is explored in Marianne Moore’s poem ‘A Jelly-fish’, where the creature exerts ‘a fluctuating charm’.

A Crossota jellyfish filmed at the Enigma Seamount in the Marianas Trench, more than two miles beneath the ocean surface. CREDIT: Courtesy of the NOAA Office of Ocean Exploration and Research.

Jellyfish escape as quickly as they appear and while they may be allowed to touch us, they themselves often resist capture. They appear both alluring and elusive. The very nature of their movement contributes to their ethereal beauty, and where better to observe this than in a tropical lagoon? The Raja Ampat islands off West Papua boast several. Others can be found on the Kakaban islands off Borneo. In both places the jellyfish have lost their ability to sting humans, making it possible to appreciate their delicacy and movement in safety. In the Ampat islands, the lagoons are connected to the ocean through underwater channels that limit the entry and exit of seawater. In addition, the water there is stratified into an oxygen-rich surface layer where the jellyfish live and a deeper layer, devoid of oxygen, where they are absent. Two genera of jellyfish, the so-called golden jellyfish, Mastigias, and the moon jellyfish, Aurelia, coexist there. The species of Mastigias found in Ampat has lost the spots on its bell and oral arms and the marine biologist Michael Dawson believes this indicates a new subspecies has evolved there with no appreciable sting, presumably as the result of geographical isolation.

The slow, seemingly directionless pulsation of jellyfish can have a calming effect and lends itself to hospital and general practice waiting rooms, a feature as yet unexploited. Its languid movement calls into question how efficient this is as a means of locomotion. Work done at Woods Hole Marine Biological Laboratory in Massachusetts is providing the answer. It seems that jellyfish have a special way of recapturing some of the energy expended on each swimming stroke. When a medusa contracts its bell, it creates two vortex rings. The first is shed in its wake, propelling the animal forwards. The second, during the relaxa- tion phase, rolls under the bell. This second vortex ring spins faster than the first and, as it does so, sucks in water which pushes up against the underside of the bell, giving the jellyfish a second- ary boost. It is a technique that works only at slow speeds and when the body size is small. The conclusion reached by Brad Gemmell and his team at Woods Hole is that a jellyfish expends less energy in travelling a given distance than any other marine animal so far studied. Its efficiency, however, comes at a price, namely low speed and virtually no maneuverability.

It would be wrong, however, to dismiss the humble jellyfish as a primitive automaton, unable to modify its movement and behaviour. By attaching accelerometers to the barrel jellyfish, Rhizostoma pulmo, it has been shown that it is able to orientate its swimming in relation to the direction of the tides. When the tide withdraws from the shore, this particular jellyfish orientates itself so as to swim against the current. When the tide flows towards the shore, it also swims in a consistent direction, either with or against the current, depending on the depth of the water. This appears to be a mechanism for keeping jellyfish together as a swarm and avoiding their becoming stranded on the shore.

Cassiopea, the upside-down jellyfish, are the most evolutionarily ancient creature known to sleep. CREDIT: Caltech

The fascination that jellyfish engender in us deepens when we consider recent discoveries about another aspect of their behaviour, one which mirrors our own. In the so-called upside- down jellyfish, Cassiopea, it is possible to witness periods of diminished activity resembling sleep from which the creature is only slowly aroused (reminiscent of our own behaviour when sleep deprived). Like us, this jellyfish becomes ‘sleepy’ when exposed to the naturally occurring chemical melatonin. Sleep, or at least periods of cyclical inactivity, would appear to have arisen early on in evolution, well in advance of the possession of advanced nervous systems.

Earlier in the book, I stressed how the anatomy and the life cycle of jellyfish proved to be more complex than previously imagined. The behaviour of jellyfish in their natural habitat is proving equally complicated. We know that migrations of jellyfish in a horizontal direction are guided by the position of the sun. The golden jellyfish in Palau, for example, follow the sun’s arc across the sky. Before sunrise, they cluster at the western end of Jellyfish Lake. With the dawn, they swim in an easterly direction towards the light, following the sun until they reach the eastern shore. As the sun continues towards the western horizon, the jellyfish reverse their course and return to the western shore to await the new day.

Vertical migration also occurs. Using echo sounders in a deep Norwegian fjord, the movements of individual helmet jellyfish,  Periphylla periphylla, were monitored. This species of jellyfish segregates itself into assemblages. Each assemblage shows a different preference as far as vertical positioning in the water is concerned. Night-time groups congregate for the purpose of feeding and reproduction while other groups form for brief periods in other situations, only to disperse and then re-group. It has been suggested that this represents a type of social behaviour and raises the question of what cues they use to seek each other out. Jellyfish may not be the passive drifters we imagine after all. Acoustic studies combined with observations using submersibles and the use of electronic tagging may yet reveal more sophisticated patterns of behaviour.

David Albert from the Roscoe Bay Marine Biological Laboratory in Vancouver goes so far as to declare jellyfish really do have a brain of sorts. Studying the moon jellyfish, Aurelia, he was able to confirm that they swam upwards in response to being touched by a predatory jellyfish, downwards in response to low salinity, and furthermore showed additional behaviours such as avoiding turbulence, forming aggregations in the water and exhibiting directional swimming in a horizontal plane. These responses appeared not to be simple reflexes but constituted an organized set of behaviours requiring sensory feedback for their execution. These numerous adaptive behaviours, he believes, have been critical to their survival.

The gap that exists between ‘us and them’ may indeed be narrowing.