By measuring mechanical forces inside an embryo for the first time, researchers have shown how a physical “jamming” mechanism assists development. 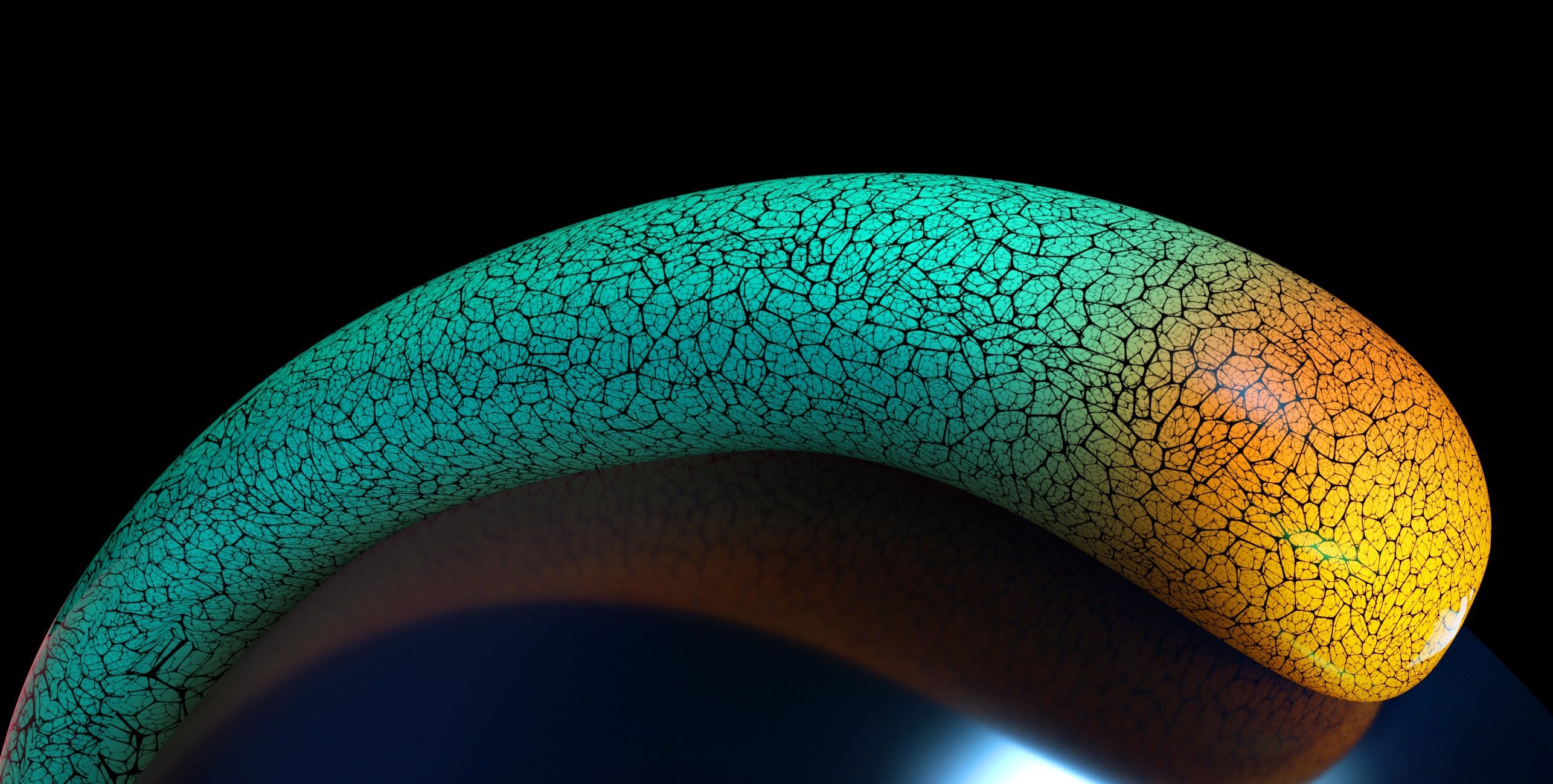 What do incipient organs, traffic jams, and the frothy head of foam at the top of a beer glass have in common? Far more than expected, according to results published in Nature earlier this month. For the first time, using a series of clever, state-of-the-art techniques, scientists have uncovered the balance of physical forces that shapes tissues in developing embryos. And the process they’ve identified has turned out to be surprisingly familiar—not for its role in biology, but for its part in revolutionizing how physicists understand a slew of materials ranging from toothpaste to glass.

The team, led by Otger Campàs, a biophysicist at the University of California, Santa Barbara, studied the forces in a fish embryo that establish the long axis of its body. This crucial stage of development, they found, is governed by what’s known as a jamming transition: At the tip of what becomes the tail, cells can flow freely past one another like a fluid, but closer to the head, they get increasingly jammed together and eventually behave more like a solid. Those differences in turn determine how the body elongates and how various structures along that axis can be sculpted.

Physicists have been studying jamming theory in inanimate systems for the past 20 years. They found that materials such as glasses, colloids, and foams get trapped in a state away from equilibrium, neither fully solid nor fluid. Consequently, even though their basic units remain exactly the same—whether soap bubbles, grains of sand, or molecules in a polymer—they can sometimes still collectively flow like fluids or jam together like particles in a solid. (The same equations also describe the behavior of, say, cars in traffic.)

Soft matter physicists uncovered three criteria that characterized these systems: how much empty space exists between the particles, how densely the particles are packed, and how much the particles can jiggle around.

Campàs and his colleagues measured all three properties in different regions of the developing zebra fish embryo, from head to tail, and showed that the way the cells get packed and change their behavior also fits the theory of jamming. Before, scientists had thought that cells essentially fine-tuned forces, applying more stress here, less there, to guide everything into place like a sculptor molding clay. “Instead,” Campàs said, “it’s more like blowing glass,” like liquefying a part that needs sculpting and then letting its new form set.

It took eight years to develop the techniques needed to demonstrate and measure these forces at work in embryonic tissues. The researchers first used a tiny glass needle, its tip measuring only 10 microns across, to inject a single droplet of ferromagnetic fluid between the embryo’s cells. As the zebra fish developed, the scientists measured how the shape of the droplet changed, allowing them to determine the strength of the forces the cells actively applied against one another. They then turned on a magnetic field to control the droplet themselves and found that when they turned the field off, the droplet did not entirely return to its previous spherical shape. They were therefore able to measure the amount of stress needed to permanently deform the tissue (also called the yield stress) as well.

These quantities had never been obtained in a biological system before. In fact, such measurements had rarely been achieved in inert materials (although Campàs said that, going forward, the droplet method can be used in those systems, too).

Toward the tail end of the embryo, the yield stress was lower than the active cellular forces, and there was more space between the cells, allowing them to jiggle and flow, to locally “melt” and mold the tissue. Closer to the head, however, the gaps between cells became closed off and the yield stresses increased, leaving the cells’ active forces too weak to overcome them. The tissue rigidified. “It’s like you’re driving a car, and the [active cellular] forces are the gas, and the jamming transition is the brake,” Campàs said.

In other words, “it’s a true fluid-to-solid transition from a jamming perspective,” said Vikas Trivedi, a bioengineer at the European Molecular Biology Laboratory in Barcelona who was not involved in the study. “That something as simple as a jamming transition can drive the process of axis formation, which is so fundamental to animal development,” he said, is “all novel for a biological system.”

Beyond revealing a jamming transition, the measurements showed that the tissue behaves something like soap suds or beer froth. The idea of modeling tissues as foams dates back 100 years, to the work of D’Arcy Thompson, one of the pioneers of mathematical biology—but now, for the first time, scientists have proof that such an understanding can add to biology in a meaningful way.

The work also stands to inform ongoing research about jamming in other biological contexts. Physicists like Lisa Manning of Syracuse University have used modeling techniques to examine jamming transitions in cellular systems where density and space are not factors, as in flat tissues where cells pack together without gaps. They’ve found that cell shape alone can predict whether a region of tissue will act like a fluid or a solid.

Jeffrey Fredberg, a biophysicist at Harvard University, has confirmed Manning’s predictions, both in cultured systems and, more recently, in the fruit fly embryo. Campàs’s findings brought that work from two dimensions into three. “Now that this idea of cell jamming has been demonstrated in two living models of development, it’s clearly not just a fluke,” Fredberg said. “It’s something basic to all of cell biology.”

There is also an intriguing difference in the behaviors of the two-dimensional sheets that Manning and Fredberg studied and the three-dimensional tissues that Campàs worked with. In Manning’s experiments, greater adhesion, or stickiness, between cells led to less jamming—the opposite of what Campàs’s group observed. Those differences “suggest that although fluid-to-solid transitions are used all over the place, there are several different mechanisms cells can use to drive those transitions,” Manning said. “Just like you can freeze a glass of water either by changing the pressure or changing the temperature.”

Campàs, Manning, and Fredberg all expect to see jamming transitions elsewhere as well: in the formation of organs, for example, and in metastasizing cancers where unjamming could enable collections of cells to migrate away from solid tumors (something researchers are already seeing hints of). “A lot of systems will have to be reexamined in the context of jamming,” Fredberg said.

A first step will mean determining how conserved the mechanism Campàs observed is: whether other species use it, too, and whether it occurs in both developing and adult tissues—not to mention how genes influence it.

“I think this transition could be a paradigm that’s used everywhere,” Manning said.

Lead image: A fluid-to-solid “jamming” transition, seen in materials like glass and foams, has been observed in the developing tissues of zebra fish embryos. Cells in the elongating tail (yellow) “melt apart” to become more pliable but stay packed like a solid further up the body to fix changes in place. Credit: Illustration by Brian Long, UC Santa Barbara College of Engineering