To scientists’ surprise, blended mixtures of cytoplasm can reorganize themselves into cell-like compartments with working structural components. 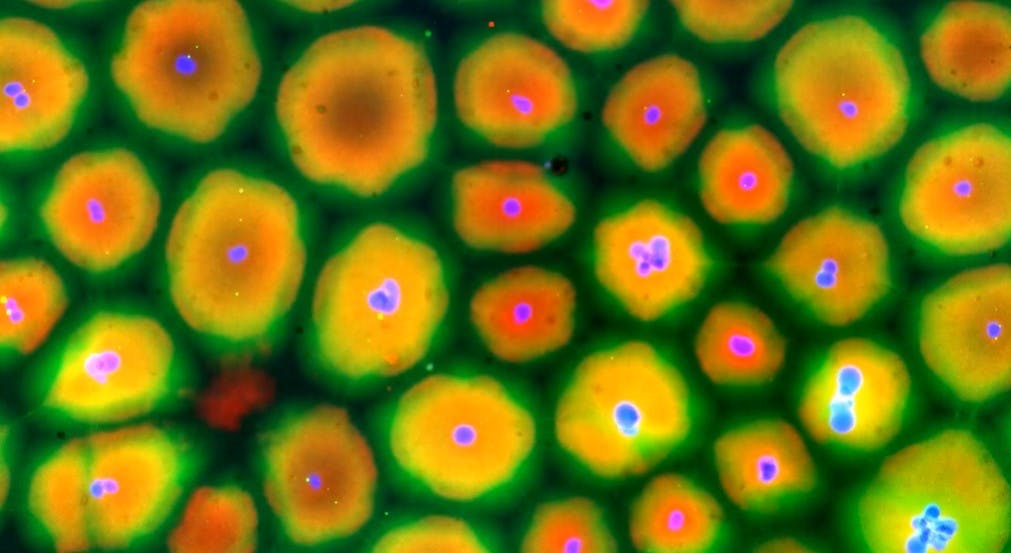 Put a banana in a blender, and you don’t expect to get it back. But blend up a bunch of living cells and research suggests that you maybe should.

If simply left alone, the liquid innards of a cell—its cytoplasm—have a surprising capacity to reassemble, even without components that appeared essential to some scientists. Experiments described in a November 2019 Science article revealed the unanticipated extent of this talent and delved into its mechanics. They vividly illustrated how well equipped cells are to restore themselves to order after chaos intrudes, and they might­­ brighten the prospects of scientists who hope someday to create completely artificial cells.

“It was really an accidental discovery, the sort of experiment you would conceive of an 8-year-old doing,” said James Ferrell, a chemical and systems biologist at Stanford University School of Medicine. “Just take a bunch of eggs and smoosh them up and see what happens.”

When Xianrui Cheng, a postdoctoral researcher in Ferrell’s lab, first witnessed the eggs unscrambling themselves, he was looking for something else: signals that tell cells to die. As a normal part of healthy growth and development, an organism sometimes needs for some of its cells to die on schedule. Cheng wanted to see how the signal responsible for this cellular suicide (apoptosis) spreads within a cell, and to do so, he needed cytoplasm.

He got it in a way an 8-year-old would approve of, by blending a mass of eggs from a common lab animal, the squat African frog Xenopus laevis, in a centrifuge. The sizable egg cells each measure more than 1 millimeter across, which makes them bountiful sources of cytoplasm.

Next, Cheng added frog sperm, although his intent wasn’t (and couldn’t be) to fertilize the mixture. Instead, from previous studies of apoptosis, he knew that as the death signal spread through the cytoplasm, the nuclei from the sperm would vanish. If he exposed one end of a tube of the cytoplasm to a trigger for apoptosis, then the disappearance of the nuclei would mark the signal’s spread.

But before death arrived for the nuclei, he noticed something odd about them. Rather than remaining at their initial random positions, the sperm nuclei appeared to be repositioning and organizing themselves. When Cheng looked at a drop of the cytoplasm more closely on a slide under the microscope, he watched the nuclei space themselves out in a lattice-like formation. Moreover, the cellular organs (organelles) and skeletal proteins arranged themselves around the nuclei, creating compartments that, to Cheng, resembled a sheet of skin cells.

Cheng tried again, this time without the sperm. But still, the cell-like compartments emerged. “I just thought, how could it be? We homogenized the living matter, the biological material. How could it return to some kind of structured organization?” Cheng said. “It’s like coming back to life.”

Striking as this activity was, it wasn’t without precedent. Self-organization occurs at many levels in living systems. String the right sequence of amino acids together and a long peptide chain will fold itself into a working protein. Cells within an early embryo arrange themselves to generate tissues to build a human.

“It was really an accidental discovery, the sort of experiment you would conceive of an 8-year-old doing,” says James Ferrell of Stanford University School of Medicine.

Likewise, scientists have taken the molecular components of many cellular structures—including ribosomes, the endoplasmic reticulum, the spindle that divides chromosomes during cell division, and the complexes that trigger a mother cell to split into daughters—and coaxed them into reassembling themselves outside living cells.

But notwithstanding scientists’ previous successes in getting various cellular structures to emerge outside the natural environment of the cell, Cheng and Ferrell are the first to get the entire cytoplasm to arrange itself as if inside a whole cell, said Rebecca Heald, a cell biologist at the University of California, Berkeley.

“It’s an amazing demonstration of the properties of the cytoplasm and its ability to self-organize,” she said. “Visually, it’s incredibly striking that you can have this kind of organization happen spontaneously after homogenizing these eggs.”

Seeing the compartments emerge made Cheng and Ferrell want to know how it happened. They knew at the outset that the DNA contained in the sperm was not responsible, since self-organization wouldn’t require the expression of genes. However, they quickly zeroed in on another suspect: a star-shaped organelle called an aster derived from the sperm. “We thought, aha, the sperms are making asters form, and the asters are dividing up the cytoplasm,” Ferrell said.

These asters, constructed of hollow rods called microtubules, sprout from a structure known as the centrosome, which organizes the microtubules. When cells rest between divisions, microtubule asters organize the cell’s contents. Frog eggs lack usable centrosomes, so when Cheng added the sperm, he gave the cytoplasm a powerful organizational tool.

But not one that the cytoplasm couldn’t do without: In the absence of sperm, the process still happened, although it took nearly twice as long and proceeded differently. Small voids formed in the cytoplasm, then coalesced into empty border zones. Within these boundaries, the microtubules organized themselves, ultimately producing compartments that closely resembled those formed under the guidance of sperm centrosomes.

“That doesn’t surprise me, but I am sure it surprised other people,” Heald said. Her own research, along with that of others, has shown that it’s possible to create microtubule structures without centrosomes. The key lies with microtubules themselves. “Biology is full of redundancy, because when a process is very important, you want to have multiple mechanisms supporting it,” she said.

Like magnets, microtubules are polarized. With their plus ends growing outward and minus ends attached to the centrosome, which is often near the nucleus, they form what Heald describes as a compass within the cell. Motor proteins, such as dynein, ferry cargo along the microtubules, guided by their polarity. (Sometimes that cargo includes pieces of microtubules that need to be relocated.)

Self-organization requires both microtubules and motor proteins, Cheng and Ferrell found. When they prevented microtubule formation and inhibited dynein from working, the compartment formation stopped or was severely impaired. The scientists had expected that another major component of a cell’s internal structure, fine filaments of the protein actin, would also drive organization, yet actin proved unnecessary.

Heald suspects that, with some exceptions, other cells possess a similar capacity for self-assembly. “Some cell types have much more complicated organizations that could not be recapitulated,” she wrote in an email. Cheng is now testing other types of cells and eggs from other species.

This ability may come in handy when cells finish dividing and must reorganize the components they have just inherited, Ferrell said. He also suspects that certain types of cells may have a particular need to self-assemble, such as immune and cancer cells that squeeze through tight spaces in tissues and must jumble up their contents in the process.

“It’s an amazing demonstration of the properties of the cytoplasm and its ability to self-organize,” says Rebecca Heald of the University of California, Berkeley.

“I think we haven’t completely learned our lesson yet about how powerfully biological systems are evolved and selected to not only function but to build themselves, to organize themselves,” Ferrell said.

The self-organized compartments lack one major component of cells: membranes. The membrane surrounding a cell defines it and its relationship with the outside world. “It is like the skin of an organism,” Michel Bornens, a cell biologist at the Curie Institute in Paris, told Quanta in an email.

Lacking membranes, the compartments resemble natural biological oddities called syncytia. In these large cells, found in organisms like slime molds and fruit fly embryos, multiple nuclei share the same cytoplasm. A single fly embryo can contain about 6,000 nuclei with no boundaries between them, according to Erik Griffin, a developmental biologist at Dartmouth University. “To me that is what it looks like,” he said of the cell-like compartments, adding that they will likely help to explain how such a large syncytial system can organize itself.

Like the nuclei within the developing fruit fly embryo, the compartments that contained sperm in Cheng and Farrell’s experiments divided to produce more of themselves—a “completely unexpected” result to Heald. Normally, membranes would delineate this process, but instead voids surrounding the compartments became the boundaries. “Unless you have a boundary, you can’t see a division happening,” she said. “This spontaneously made a boundary.”

Finding a way to insulate the individual cell-like compartments within a membrane, and thereby making them “truly reconstituted cells,” would be the real breakthrough, Bornens said.

For more than two decades, biologists have sought to reconstitute cells from a minimum set of components. Such artificial cells might still be far off, but they could offer powerful insights into how natural cells function and build themselves; they could also reveal how cells might be engineered for new purposes.

To date, biologists have tried to partition artificial cells in a number of ways, such as using tiny droplets and chambers. However, the discovery that cytoplasm can organize itself into cell-like compartments suggests that engineering may be unnecessary, according to Griffin. “The cell will do it on its own,” he said. “The distinction there is you are imposing structure, and here it is forming naturally.”

Lead Image: This blended, homogeneous mass of cytoplasm spontaneously organizes itself into many small compartments centered on a nucleus (blue) and separated by voids. Organelles in the cytoplasm, such as microtubules (green) and endoplasmic reticulum (red) also position themselves around the nuclei. Credit: Xianrui Cheng