Researchers are beginning to understand the ways in which viruses strategically manipulate and cooperate with one another. 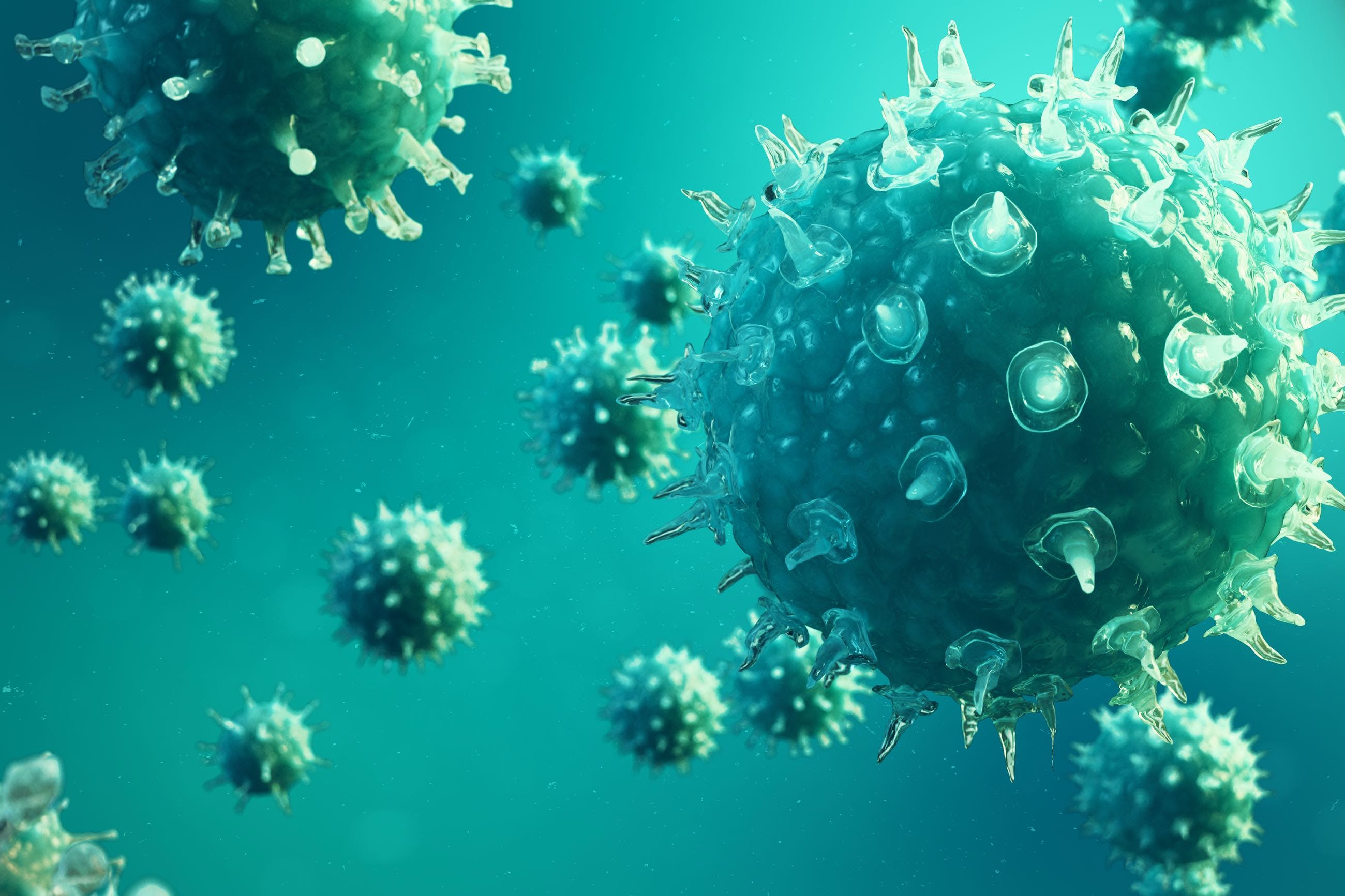 Social organisms come in all shapes and sizes, from the obviously gregarious ones like mammals and birds down to the more cryptic socializers like bacteria. Evolutionary biologists often puzzle over altruistic behaviors among them, because self-sacrificing individuals would at first seem to be at a severe disadvantage under natural selection. William D. Hamilton, one of the 20th century’s most prominent evolutionary theorists, developed a mathematical theory to explain the evolution of altruism through kin selection—for instance, why most individual ants, bees, and wasps forgo the ability to reproduce and instead pour all their efforts into raising their siblings. Bacteriologists developed game-theory models to explain why bacteria in groups produce metabolites for their neighbors, even though some cheaters take advantage of the situation.

But until recently, no one had considered that simple viruses, too, have social lives that influence their fitness and their evolution. “From a theoretical perspective, there is clearly huge potential for viruses to interact socially, leading to possibilities for cooperation and conflict,” wrote Stuart West, a biologist at Oxford University who studies the evolution of social behaviors, in an email to Quanta. “However, there has been relatively little attempt to tackle this empirically.”

In a recent study published in Nature Microbiology, Rafael Sanjuán, an evolutionary geneticist at the University of Valencia in Spain, and his colleagues used a combination of theory and experiments to explore viral cooperation and conflict. They found that the spatial structure of a viral infection—the way that different sets of viruses can be isolated in separate compartments of the infected body—matters tremendously. In an evenly mixed system, altruistic viruses fall victim to “cheaters” that take advantage of their sacrifices, but if pockets in the body can isolate and shelter the altruists, they have a shot at survival.

Consider the vesicular stomatitis virus (VSV), a less dangerous member of the same viral family as rabies. Viral infections usually stimulate the cells of their mammalian hosts to produce interferons, the signaling proteins that raise neighboring cells’ antiviral defenses and interfere with viral replication. The wild-type VSV has evolved ways to suppress its host’s innate immune system, but at the cost of reproducing more slowly. Still, that ability enables the population of suppressive viruses to thrive—unless a “cheater” variant comes along.

The cheater does not have the ability to suppress its host’s defenses; in fact, its presence stimulates the release of interferons. But it still reaps the benefit of a lowered immune response because of the nearby VSVs that suppress interferon release. Because the cheaters don’t pay the reproductive cost of interferon suppression, they can outcompete the wild-type virus in the short term. From a social behavior standpoint, as Sanjuán and his colleagues pointed out in their paper, the wild-type VSV’s suppression of interferon qualifies as an altruistic act because in effect the wild type sacrifices itself for the cheater.

Eventually, the host’s interferon response overwhelms both types of viruses and kills them. It might seem like natural selection would therefore always weed out the ability to suppress interferon because its altruism would perversely leave viruses that had it at a disadvantage.

Sanjuán’s modeling study shows, however, that is not necessarily the case: The altruistic interferon-suppressing virus can still evolve and thrive if it and the cheater are physically segregated. Structures and barriers in the body can create havens where the interferon-suppressing viruses can survive, safe from the damage that cheaters would otherwise bring down upon them.

To model the specific conditions in which innate immune suppression can occur, the researchers used the theoretical framework that Hamilton developed. According to Hamilton’s rule, altruism evolves when r × B > C, where B is the benefit to the recipient, r is the recipient’s relatedness to the giver, and C is the cost to the giver.

The researchers also used a parameter to indicate that the benefit, B, depends on whether a virus is surrounded by wild-type or cheater neighbors. Applying Hamilton’s rule to well-mixed and spatially segregated combinations of the two VSV variants, they could empirically estimate the parameters in Hamilton’s equation.

“For innate immune suppression to evolve, you need spatial structure,” Sanjuán said. Because both the virus and the host’s interferon response spread out from cell to cell, it’s actually quite difficult to avoid the emergence of spatial structures during infection. Limitations on the rate of diffusion of viral particles and interferon molecules, as well as physical barriers in the body’s tissues, easily create spatial heterogeneity, thus allowing for the evolution of innate immune suppression.

In animals with complex behaviors and in bacteria with relatively complex communication systems, the outcomes of evolutionary scenarios are influenced by many factors. In the case of viruses, “it’s much simpler,” Sanjuán said. “Everything is dictated by spatial structure. There is no other known process that can affect the outcome of the system. If the viruses are mixed, then this altruism cannot evolve, and if they are segregated, then the altruism can evolve.”

Another aspect of social evolution of viruses that Sanjuán is investigating is why multiple viral particles sometimes gather and infect a cell together. The trade-off is that, if the viral particles assemble, there are fewer units to infect different cells. So “in principle, this is costly because it limits diffusion capability,” Sanjuán said. But his team found, to their surprise, that the aggregated viruses grow faster and produce more progeny. This result was dependent on cell type: In tumor cells that have no innate immunity, being aggregated was costly. But in normal cells, which do mount an innate immune response, being aggregated was beneficial for the viruses because it allows the viruses to overwhelm the innate immune response, Sanjuán suggested.

Although the strategy of aggregation for infection seems beneficial for the virus, it too can lead to the evolution of cheaters. For example, if one virus in the aggregate loses a few genes, then it can replicate more quickly, and with that advantage it can outcompete the other viruses in the aggregate. These gene-deficient viruses are known as defective interfering particles (DIPs): Many of them lack about 90 percent of the viral genome and survive as just a small piece of RNA that can replicate very quickly inside a host (they cannot ordinarily infect a new host because they are so incomplete). In cell cultures with a high density of viral infections, the DIPs take over and soon represent more than 99 percent of the viral population, Sanjuán said.

The existence of DIPs may touch on another puzzle: Do viruses adjust their manipulations of one another in keeping with the needs of their life cycle? Raul Andino, a virologist at the University of California at San Francisco, points out that early in its invasion of a host, a virus might want lots of company because multiple simultaneous infections would increase its odds of success.“But then they want to reduce the possibility of high multiplicity of infection at a later stage, to reduce the possibility of production of these defective particles,” he said. “This is something we don’t fully understand, but it is a really interesting problem.”

Lead image: Viruses might seem like the ultimate selfish parasites to their hosts, but researchers are discovering that they can have extensive social interactions with one another, including some behaviors that seem like altruism. Credit: rost9