We Should Count Balance As One of the Senses 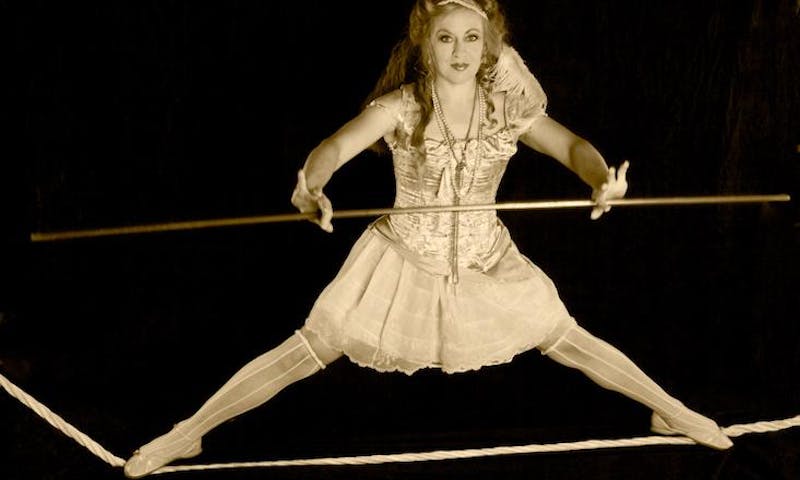 One Tuesday in January, a leather briefcase strung across my shoulder, I tramped through the damp campus of a large California university, looking for the classroom where I would lecture. The drizzle-mist common to the central coast in the winter months had left me wet and cold, so I stepped into the dining hall for some respite. As I took my third step, one of my boot-clad feet slipped on the wet tile floor and shot out from under me. The displacement of my leg was so sudden, so violent, it seemed certain I would end up on my back in front of several hundred undergraduates—and perhaps later even on a stretcher in an ambulance. But in less than a second, and with no conscious effort, I righted myself and continued on my way, not humiliated, not harmed, and totally amazed.

What saved me? My sense of balance, of course.

Yet balance—what scientists call equilibrioception, or vestibular sense—is not generally considered a sense at all. When Dianne Ackerman wrote A Natural History of the Senses, in 1990, she set out to explore the evolution and complexity of the “radar-net of our senses.” To understand the world, she wrote, “we have to ‘use our heads,’ meaning our minds,” which “doesn’t really dwell in the brain, but travels the whole body on caravans of hormone and enzyme, busily making sense of the compound wonders we catalogue as touch, taste, smell, hearing, vision.” Balance didn’t make the cut.

Your sense of balance can create illusions, just like your eyes and ears.

She is not alone in this traditional view of what a sense can be. Most of us were taught that only these five senses exist. This notion goes back to Aristotle, who concluded more than 2,000 years ago, in De Anima, that both human and nonhuman animals have five, and only five, senses. But Fiona Macpherson, director of the Center for the Study of Perceptual Experience at the University of Glasgow, believes this is outdated. “The idea that there are five seems like a convenient myth that we learn in primary school, that is an approximation to the truth, which we easily parrot back to others.”

Macpherson suggests there are as many as two dozen different senses used by the vast array of life on the planet. And equilibrioception is certainly one of them. “It has all the features that people usually list when they give what they take to be the defining features of a sense,” Macpherson told me in an email recently. “One might question whether all these are required in order for [it] to be a sense, but it helps the case of equilibrioception that it has them all.”

One prominent feature of a sense is a dedicated sensory organ that picks up information outside the body. In the case of balance, humans and most mammals are blessed with vestibular organs. These internal spatial compasses, one in each ear and composed of various parts, detect the direction of gravity and the head’s orientation to the earth. When my foot slipped on the wet floor, the utricle and saccule (which look like tiny toothbrushes) sensed my head moving quickly back and down, while three semicircular canals, each oriented in a different plane, detected my head’s sideways rotation. If an onlooker could have frozen the action at this point, both my feet would be off the floor and my arms flung up above my head, my eyes wide in surprise.

Along with my eyes (which saw one foot rising into the air in front of me) and sensory receptors in my arms and legs, the vestibular organ sent impulses to my brain stem, where they were integrated with a library of information about similar experiences stored in my cerebellum and cerebral cortex. In a matter of milliseconds, my brain stem responded by transmitting impulses back to my eyes, head, neck, trunk and legs, all of which cooperated to get my feet back on the ground and my weight distributed equally over both feet.

Another defining feature of a sense is that it is fallible. Macpherson pointed to the merry-go-round phenomenon. While you’re on it, you feel like you’re turning, and you are. But when you step off, you’re dizzy with the feeling you’re going round and round. In this way, your sense of balance can create illusions, just like your eyes and ears: Ménière’s disease, or damage to the inner ear, can leave people with severe vertigo, that nauseating sense of spinning even while sitting still.

Balance is one of the most ancient of our senses, much older than sight or hearing.

And it’s not just us. Snakes, toads, and fish share the vestibular system with mammals, as do birds. Other creatures, even the most primitive, use entirely different organs and strategies to orient themselves to gravity and the world around them. Take ctenophores, for instance. Also called comb jellies, these diverse and ancient predators can be as small as a rice grain or as long as a baseball bat. Fossils indicate they may have been evolution’s first multicellular experiment, and they don’t even have nervous systems—but they, too, have a sense of balance. They use a very rudimentary censor called a statocyst, essentially a tiny piece of calcium carbonate resting on hair-like cilia that lean and bow when the organism lists in the water. The nautilus, and its relatives the octopus and squid, have more sophisticated statocysts that allow them to prowl the ocean deep in search of prey. Even plants orient themselves to gravity, their statocytes sending roots down into the dirt and stems and trunks up toward the light.

Many people have lived perfectly meaningful lives without the ability to hear or see, but it’s difficult to imagine persevering long in the constantly vertiginous state of a world without a properly functioning vestibular organ. On the evolutionary timescale, balance is one of the most ancient of our senses, much older than sight or hearing. It is also particularly widespread across so many taxa. This indicates just how significant it has been to the survival of so many species, our ancient ancestors included. Without it, humans couldn’t have begun to walk upright, never mind hunt bison or gather berries or defend ourselves against enemies and predators. (Or, as British snowboarder Billy Morgan did in 2015, pull off the world’s first backside 1800 quad cork.)

Despite libraries of scientific research about how a growing list of sense modalities work, all we ever hear about is the sanctified Aristotelian sense quintet. If you Google “senses curriculum,” you’ll see that what we’re teaching our kids is grossly out of date. The National Institute for Health, to its credit, recognizes other kinds of sensations beyond the Big Five (pain, for instance), but even it doesn’t go as far as acknowledging that they are, indeed, senses as well.

Perhaps the best reason to add some new names to the sense list is to help us understand more about the world we live in. According to Macpherson, “It is important to recognize the different senses that we have in order to recognize the different ways that we, and other creatures, have of perceiving the world, and to know what objects, properties, and relations we, and other animals, can find out about using perception.”

Perhaps some of the reluctance to embrace balance as a sense is because we cannot see the sensory organs in operation. Unlike ears and noses and tongues and eyes and skin, statocysts and utricles and saccules are hard to pronounce and hidden away, working their autonomic magic invisibly. But when I slipped on that wet floor, was I ever glad they were there. It was all over in less than a second, and I felt like I’d been rescued by the hand of God.

Jeff Gailus is a writer and author based in Missoula, Montana, focusing on the intersection of nature, culture, and science. Follow him on Twitter @jgailus.

WATCH: The M.I.T. architectural rebel John Ochsendorf on the difference between a great ancient building and a modern one.