How advanced civilizations could leave us a message of their presence. 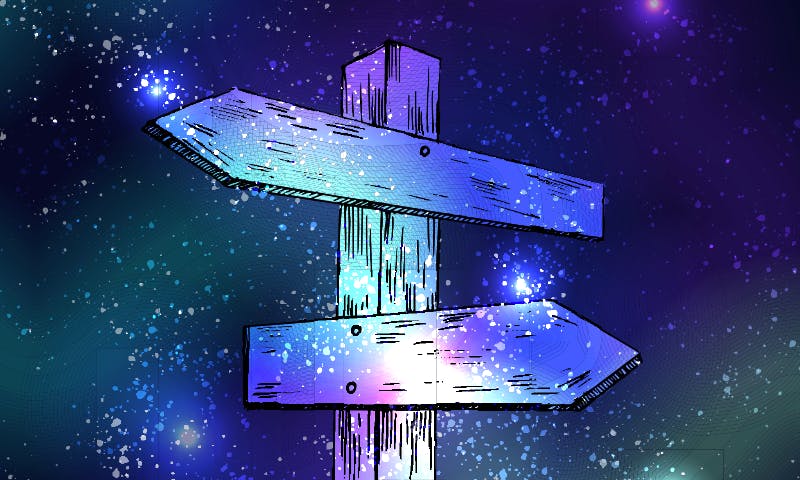 We all leave behind signposts of our presence. Some are accidental, like footprints on the beach, a squashed couch cushion, or a badly parked car. Others are left on purpose, like gravestones to remember loved ones, or the piles of rocks (called “cairns”) that hikers use to mark trails. (And, of course, dogs pee on, well, pretty much anything to mark their territory.) These signposts don’t last forever. Footprints are quickly washed away, as is dog pee. And although some cemeteries survive for centuries or even millennia, geology will eventually cover them up. The same idea applies on a cosmic scale.

But there’s a way aliens might make their mark stick. In a new paper on “SETI beacons”—SETI is the “search for extraterrestrial intelligence”—we show how advanced civilizations could leave an unmistakable trace of their presence using entire exoplanet systems. It’s forthcoming in the Monthly Notices of the Royal Astronomical Society (and available on arXiv).

For decades, astronomers have searched for signs of extraterrestrial civilizations. One approach is to look for their accidental byproducts, like waste heat or atmospheric pollution. Astronomers are also on the lookout for purposeful signposts of alien presence, but it’s a challenge to know what to look for. In Carl Sagan’s novel Contact, aliens get humanity’s attention by re-transmitting back to us the first-ever strong television broadcast (of Hitler opening the 1936 Olympic games in Berlin).

That’s the equivalent of a cosmic jumping up and down screaming “look over here, dummy!” But if advanced civilizations are rare, the probability of one existing at the same epoch as us is extremely small. What about a lonely alien civilization that wants to leave behind a marker of its presence, one that will last for millions or even billions of years? This would be a cosmic landmark to last the ages, to survive long after the civilization itself was gone. It would need to be detectable, easily recognized as non-natural, and very robust. We came up with an idea: Maybe planetary systems could be redesigned to serve as cosmic landmarks!

We focused on a particular type of planetary system called resonant chains, which can encode a sequence of numbers. In resonant chain systems, each pair of neighboring planets is in orbital resonance—meaning the two planets keep re-aligning after a certain number of orbits. This is because their orbital periods form the ratio of two small integers. For example, in 2:1 resonance, the inner planet completes two orbits in the same time the outer planet completes one orbit.

In a long chain of 2:1 resonances, the relative orbital periods of the planets are (from the inside-out): 1, 2, 4, 8, 16, and so on. That is a recognizable sequence, but it is not “non-natural.” The best-known example of resonance in our solar system is among Jupiter’s three innermost large (Galilean) moons—Io, Europa, and Ganymede. These form a 1, 2, 4 resonant chain. The exoplanet system HR 8799 contains four gas giants that are likewise thought to form a 1, 2, 4, 8 resonant chain. No humans were present to witness the birth of these systems, but our computer models do a decent job of reproducing them without resorting to advanced civilizations nudging planets around. Astronomers know of several other resonant chain exoplanet systems, such as Trappist-1, which contains seven (known) planets.

A cosmic landmark must therefore encode a series of numbers that is not only recognizable, but also rarely forms in nature. We can get a handle on what systems do form naturally from the known resonant exoplanets, as well as with computer simulations of such systems forming.

In our new study, we considered four cases, each with 6 or 7 planets:

We chose these series because we do not think they will ever form in nature. The processes that shape planetary systems form a lot of simple resonances (like 2:1) but only very few more complex ones (like 8:5). So, even if a given system has one or two unusual resonances (like the 8:5 and 5:3 resonances among Trappist-1’s three innermost planets), it is vanishingly unlikely for any system to follow a full mathematical sequence. Indeed, Trappist-1’s outer planets contain a mix of 3:2 and 4:3 resonances.

How could aliens ever build these systems? It would take a huge chunk of orbital energy to move planets’ orbits into the right place. An intriguing possibility, proposed in 2001, is gently scooting Earth’s orbit outward to keep us cool as the sun brightens in the coming hundreds of millions of years. The mechanism for this would be a large asteroid repeatedly deflecting off of Earth, which then is deflected off of Jupiter (in the opposite sense, thus transferring orbital energy between the two planets). The same process could in principle work in any planetary system, as long as one or more asteroids’ trajectories can be carefully controlled and an additional, wide-orbit planet exists in the system. Of course, a highly-advanced civilization may instead have their own, much fancier technology (like Slartibartfast, the world-builder from The Hitchhiker’s Guide to the Galaxy). And, of course, we can only speculate as to what such a civilization would leave behind in their carefully crafted beacon system.

To start off, we built each of our four chosen systems (in a computer). We ran simulations to gently nudge the planets’ orbital separations to get the right period ratios. Next, we tested each system’s long-term survival. First, we simply let each of the planets follow their orbits around the star for 10 billion years, the lifetime of the main-sequence phase of a star like our sun. All of the systems survived—except the consecutive integer sequence (the planets’ orbits went unstable after 6 billion years, leading to collisions between several planets).

We used a series of carefully-crafted simulations to test whether each system would survive the sort of evolution our sun will go through—puffing up into a red giant then shedding its outer layers (along with almost half its mass), eventually collapsing into a white dwarf. Studies have shown that the inner planets (perhaps including the Earth) will be engulfed by the red giant sun. Our alien-signpost planetary systems are therefore on relatively wide orbits around a sun-like star. Our simulations show that the planets’ orbits expand in time as the star shrinks in mass. Yet the planets’ relative orbits remained intact and the resonances were maintained. The only exception, once again, was the consecutive integer sequence, which went unstable a couple billion years after its sun became a white dwarf.

What this means is that three of our four resonant-chain systems may indeed represent viable “landmarks.” They are non-natural, easily recognizable, and would each survive for longer than the current age of the universe. (Our simulations tested out to 20 billion years). Of course, other, more complicated arrangements of planets could potentially serve the same purpose (and we explored a series of co-orbital systems in a post introducing this concept).

We could detect this type of alien beacon with present-day technology. Our best bet would be looking for periodic dips in a star’s brightness as one or more planets block a part of the star’s light. Of course, this only works when planets are perfectly aligned with our line of sight; to maximize its visibility, the alien civilization would want to line up the planets’ orbital plane with the galactic plane (since that is where stars are concentrated).

Our sample of resonant chain planetary systems will continue to grow as more and more exoplanets are found. Astronomers will be on the lookout for alien beacon systems that encode mathematical series like the ones we have explored. But the big question is: What should we do if we find one?

Sean Raymond is an American astrophysicist working at the Bordeaux Astrophysical Laboratory in France. He also writes a blog at the interface of science and fiction (planetplanet.net) and recently published a book of astronomy poems.

Matt Clement is a planetary scientist and astrophysicist working at Carnegie’s Earth and Planets Laboratory. He is the brains behind the Early Instability model for Solar System formation and the lead author of our paper.

We are grateful to our co-authors on this paper: Dimitri Veras, astrophysicist at the University of Warwick and world-leader in the far future of planetary systems, and David Kipping, Professor at Columbia University studying exoplanet and moon detection and characterization, and the brains behind the Cool Worlds YouTube channel, which explores space, astronomy, exoplanets, astroengineering, and the search for extraterrestrial life and intelligence.