What If You Could Describe Your Dreams While Dreaming?

The potential to hack our dreams opens a new frontier for mental research. 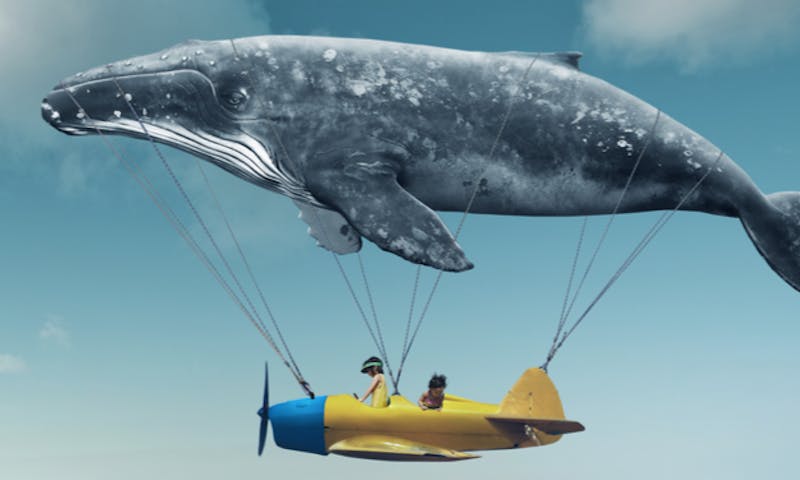 It’s a bit of a bummer that dreams are as fascinating as they are hard and expensive to study. Famed psychologists like Sigmund Freud and Carl Jung may have made big names for themselves mining the meaning and significance of our dreams, but even today, with powerful brain-monitoring technology, it’s tough to get a handle on what, exactly, is going on. Researchers, if they wait to wake up their subjects from sleep in the morning, have to contend with “rapid forgetting.” A better method is to wake people up while they’re dreaming, but this requires running a sleep lab, which doesn’t offer that much of an advantage. The dreamers are groggy and still forgetful.

If only it were possible to communicate with people while they’re still dreaming! Being able to ask dreamers to do things, even simple things at first, like counting backward, could nudge open a door to new insights. There is substantial disagreement on the function of dreams. Some theories say it’s for strengthening weak memory associations, others say it’s for rehearsing dangerous situations. Some say they don’t have any function at all.1 Perhaps these theories could be better tested with dreamer communication. But there are a whole lot of smaller problems to be addressed, too.

Dream characters can come up with the most creative ideas.

As a scientist of imagination, many questions come to mind. For example, what happens when you close your (virtual) eyes in a dream? In waking life, this cuts off light from the world, but in a dream, there is no light and the visuals of the dream world come from your mind. What happens when a dreamer imagines an object in front of them? When most people do this when awake, the imagined object is not as vivid as a real one. But in a dream, it’s all your imagination. Does an imagined object appear automatically as a real object in the dream world, or does it feel different, even in the context of the dream? How intense can pain get in dreams? Is it even pain at all?

Communicating with dreamers has input and output problems. Information coming in from our sensory organs during dreams is, for the most part, ignored. So if you talk to someone who’s asleep, they usually don’t get the message. The output problem is two-pronged. First, people don’t usually know when they are dreaming. Dreams are the most convincing virtual realities we can experience and even wanting to talk to people outside the dream world is as unintuitive as trying to talk to beings outside of our waking reality. Second, in dreams, when we engage in acts that normally would move our bodies, our muscles don’t receive the instructions (this is known as muscle atonia); our imagined dream avatars move instead. So even if we wanted to communicate, our gestures and voices don’t make it out, like people trapped in the Matrix. So how can the dreamers communicate with people beyond the seal of their dreams?

Psychologists Karen Konkoly and her colleagues were looking for a way to overcome these challenges and get more accurate information about dream content. They revealed a two-way communication with dreamers in a recent study published in Current Biology.5 Four research groups, situated around the world, took advantage of a few ways information can leak between dream worlds and the real world. On the input side, your sensory organs are not completely cut off—if they were, nobody would be able to wake you up. What often happens is that loud noises, bright lights, or significant touches are sometimes felt, and often incorporated into the dream narrative. You might have experienced this yourself, as when your alarm clock goes off, and your mind makes sense of it as a police siren in the dream you’re having. (In Christopher Nolan’s cerebral action film Inception, the protagonists relied on forceful “kicks” to jolt them out of dream states.) On the output side, dreamers have limited control of their eye movements and facial muscles. That is, when a dreamer tries to move their arm, only the dream arm moves, but when they try to move their eyes, the eyes of their actual body move too.

The scientists gave the dreamers math problems, such as 8 minus 6. One napping participant correctly responded 2 by moving his eyes twice to the right. In some cases, the researchers voiced the math problem, and in others they flashed lights or tapped subjects’ bodies. There were 36 dreamers; over 158 attempts, they responded correctly almost a fifth of the time. They were flat-out wrong just 3 percent of the time. Mostly they responded either ambiguously or not at all. But given the challenges involved, it’s remarkable there was any communication at all.

Part of what makes this possible is that one group in the study knew they were dreaming. If you were asked what 8 minus 6 was by a booming voice coming from nowhere, or coded in lights flashing in the room, you would not normally think to answer by moving your eyes twice to the right. When dreaming, we accept the reality of what we are experiencing, even if the content is unrealistic.

The scientists trained lucid dreamers to receive and send messages.

But occasionally (and for some people, quite often) people realize they are dreaming during the dream. This insight is called lucid dreaming. If you’ve ever experienced a lucid dream (about 80 percent of people will have at least one lucid dream at some point in their lives6) you probably remember how remarkable it feels. People often report that the dream becomes much more vivid—sometimes more vivid than real life—and lucid dreamers often engage in wild fantasies and adventures that feel incredibly real. Rather than being subject to what their unconscious mind churns up (which is often negative and anxiety-ridden), lucid dreamers get to live in a fascinating world that they can have a conscious role in shaping. Many scientists were initially skeptical about the very existence of lucid dreaming, but Stanford psychologist Stephan La Berge used the fact that dreamers can move their eyes at will to show that they could communicate when they were in a lucid dream.7

Konkoly and her colleagues trained lucid dreamers to receive and send messages, demonstrating that dreaming people can remember and follow instructions from when they were awake and engage in cognitive tasks when asked to. Interestingly, when the researchers woke up their subjects and asked them about their dreams, the dreamers sometimes misremembered the math problem, showing strong evidence of the problems associated with relying on dream reports of waking people. People’s memories of their own dreams can be wrong, even when those dreams were lucid.

One major obstacle to lucid dreaming research is that spontaneous lucid dreaming is rare and challenging to master. The new Netflix series Behind Her Eyes, a British psychological thriller, features lucid dreaming prominently, along with advice—not all of it credible—on how to do it. We learn that looking at a clock, or a watch, can help. That’s true. But no research suggests counting your fingers works. The same goes for trying to be calm and focused. It also baselessly recommends imagining a door (which might be useful to escape a nightmare once you’re lucid, but this has not been scientifically explored).

We could pair the more logical mind of an awake person with a lucid dreamer.

The ability to live out your fantasies when you sleep is a reason lots of people are very interested in lucid dreaming. For those hell-bent on learning to do it, it’d be best to start with this systematic review that the journal Consciousness and Cognition published in 2012.8 This review shows, however, that most recommended methods for training yourself to lucid dream have not been studied scientifically, and the studies that have been done aren’t that good. But here are some of the ways that have some evidence.

It seems that, when you’re falling asleep, you should visualize and rehearse a dream you want to have. Put an intention in your mind to realize you’re dreaming. This works better in the morning, when you wake up and are about to fall back asleep. You may once have unwittingly deployed the “dream re-entry” technique. That’s when you wake up from a dream and try to go back without actually falling back asleep. You can also make a habit of reality testing—that is, practicing looking twice at text to see if it changes. In the real world, printed text, say, on a street sign, almost never changes. But in dreams, for whatever reason, text changes frequently. If you practice checking text to see if it changes when you’re awake, you might do it when you’re dreaming. Then you’ll notice the text change and go lucid.

Lucid dreaming is fun, but is it useful? It’s possible that learning while lucid dreaming is vastly underexploited. Just as practicing sports in your imagination can increase performance in over 30 athletic games, targeted lucid dreaming can do the same thing. The benefits may not be limited to improving physical prowess. “Dreams can also provide a unique opportunity to lessen the impact of emotional trauma,” Konkoly and her colleagues write. “Thus, cues could be devised in advance to influence dream content, or be modified based on the dreamer’s preferences signaled during a dream.” On NPR, Konkoly said, “People often use lucid dreaming or dreaming for a kind of artistic, creative inspiration. But in that dream state, your resources thus far are only the ones that you have in the dream.”9 Pairing the more logical mind of an awake person with a lucid dreamer could, she suggests, have interesting collaborative outcomes—creative solutions to problems, for example. But for most lucid dreamers, it’s just a hell of a lot of fun to live out fantasies.

Communication with lucid dreamers using eye movement is still a science in its infancy, and subject to noise. Could future studies explore more robust communication, such as using the eyes to communicate in Morse code? A whole book was once written by communicating via eye twitches,10 so I am confident that this could be done.

We spend hours each night dreaming. That’s a significant portion of our lives. Although the natural function of dreaming isn’t yet clear, hacking our minds to engage in lucid dreaming is, for the most part, an unexplored frontier of mental life. What might happen when we put these hours of creative, conscious experience to use?

Jim Davies is a professor at the Department of Cognitive Science at Carleton University. He is the author of Imagination: The Science of Your Mind’s Greatest Power and Riveted: The Science of Why Jokes Make Us Laugh, Movies Make us Cry, and Religion Makes us Feel One with the Universe. He is co-host of the award-winning podcast Minding the Brain. His new book, Being the Person Your Dog Thinks You Are: The Science of a Better You, came out February 2021.