What Industrial Societies Get Wrong About Childhood

Age-based classes are not the only way to learn—and may not be the most effective. 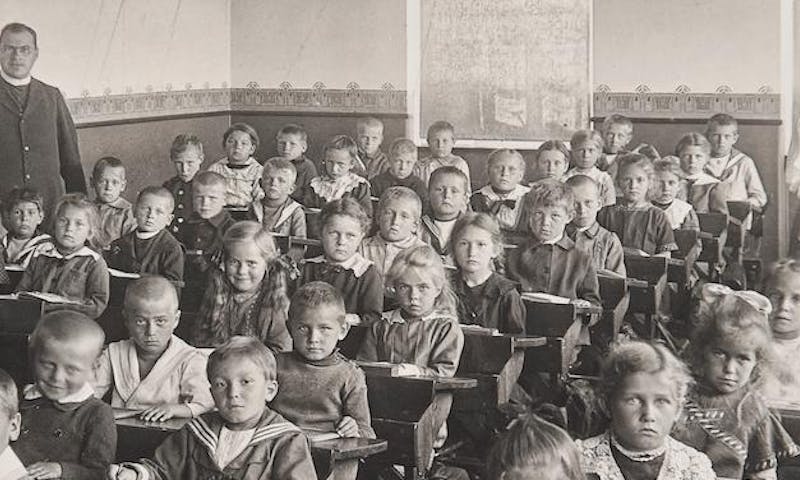 Each year across the world, kids of roughly the same age are packed into classrooms and confined to desks with the intent of learning from an adult teacher.

But is this how children were adapted to learn?

In today’s technologically dependent, economically complex world in which a particular subset of skills is critical, fact-based knowledge is no doubt best imparted from those with experience—which is usually adults.

Hunter-gatherer children spend much of their time working and playing in mixed-age groups without adult supervision.

But what about social learning? Humans as a species are set apart by their incredible dependence on one another; cooperation is at the heart of both an individual’s survival and a functioning society. So, how do children typically learn to cooperate?

Anthropological research in small-scale societies—including my work among with the Pumé of Venezuela and the Maya living in the Yucatan Peninsula—resoundingly suggests that they learn from one another.

Schooling and growing up in small nuclear families have been the norm for only the past century or so in industrialized societies—just a brief flash in evolutionary time. Childhood in these societies is commonly thought of as a period requiring intense adult investment dedicated to learning and instruction. But research in nonindustrial, small-scale societies—the kinds of communities that all our ancestors lived in both deep in the past and until fairly recently—gives a different picture.

Today children in industrialized societies spend a lot of time in supervised environments with adult direction.

In the United States, for example, children in the early 2000s were found to typically spend 37 hours, or 23 percent of waking hours, per week in school or doing homework—that’s more than four times the hours they spent playing. Parents were found to spend about 33 hours a week either engaged with or accessible to children ages 3 to 12.

At the same time, child-based exploratory play has declined. In the United Kingdom, research has found that children today play outside on average slightly more than 4 hours per week, compared to 8.2 hours for their parents’ generation.

Children in industrialized societies commonly grow up in small nuclear or single-parent households. U.S. mothers today on average have 1.78 children, which is a more than threefold decrease from two centuries ago. Smaller families mean that children not only have fewer siblings but also fewer cousins, aunts, and uncles than they did in previous generations.

In contrast, children in nonindustrialized societies tend to live in large, multigenerational families, often in close quarters, with lots of other children in close proximity. In these child-dense societies over 40 percent of the population may be under the age of 15. By comparison, in the U.S. today, only 22 percent of the population is under the age of 17. Anthropologists working in many nonindustrialized societies describe childhood as being largely independent of adults. From a young age, children freely explore their environment and spend much of their day outside in unstructured and unsupervised play or work.

Among the Pumé—hunter-gatherers living on the savannas of south-central Venezuela who my husband, graduate students, and other colleagues have periodically worked with since the 1990s—children spend many hours away from camp playing (27 percent of their day) and foraging (11 percent of their day). Boys typically fish and hunt for small game such as rodents, birds, or lizards, while girls gather fruit and firewood, dig for roots, and carry water from nearby streams to camp.

Two points highlight the contrast in children’s lives between these very different worlds: Hunter-gatherer children spend much of their time working and playing in mixed-age groups without adult supervision, and they are seldom taught through direct instruction; rather, they learn by doing.

For example, on a hot day in August, we watched a group of 3- 5-year-old Pumé boys and girls spend the morning on the periphery of camp digging for roots. They returned to camp, started their own fire, and cooked their own simple meal. On many occasions, we also saw Pumé girls learn the basics of weaving by going to the trash midden and collecting simple forms of discarded basketry, which they slowly unweave and then reweave to re-create the piece.

On another day, we watched older children recruit the help of younger children to lug a few logs and timbers from the edge of camp to construct a whirligig or roundabout. The children took turns, the older ones helping little ones get on and off, though not always successfully. Inspired by watching our house being built, for days afterward groups of boys and girls gathered raw materials—sticks, palm fronds, and twine—and built miniature houses of their own on their own.

Among Maya in the Yucatan Peninsula—subsistence farmers living in a remote village who I have lived and worked with for several months most years since the early 1990s—groups of young friends and siblings spend several hours a day with their younger brothers and sisters in tow, carrying water from the well, or in the fields without their parent’s supervision.

Schooling and growing up in small nuclear families have been the norm for just a brief flash in evolutionary time.

The takeaway from these examples is that in work, as in play, Pumé and Maya children are most often in one another’s company in mixed-age groups—watching, learning, teaching, setting their own rules, and figuring out their own social order.

My research has shown that Maya children under the age of 16 spend only about 1.8 minutes per day being instructed by a parent or adult. Pumé children ages 3–18 spend less than 1 minute per day being instructed. Other work elsewhere makes much the same point: Among the Tsimane (South American horticulturalists), adults spend less than 1 minute per day in child-directed speech.

Young children are also given a striking amount of latitude to make many of their own decisions. For example, on one memorable occasion, I was going house to house to get Maya parents’ signatures for their children to take part in a growth study. (Universities and granting organizations require that researchers obtain permission from children’s parents.) One parent looked at me and said: “Why are you asking me, why don’t you ask my daughter?”

She was 7 years old.

In the child-populous world of hunter-gatherers, little separates the spheres of adults and children. The places they work, play, relax, and sleep are not segregated. Privacy, alone time, and adult-only spaces are concepts unknown to the Pumé, for example. They live in open-walled structures that children freely run in and out of without requesting entry. Pumé children also aren’t restricted from what might be considered adult spaces and activities, such as menstrual huts (special structures where women in many traditional societies go for the few days a month when they menstruate), watching births, being around the dying, or participating in all-night social dances, called tohé, where the band joins together to sing, conduct healings, and tell stories.

Yet, despite the close contact, the worlds of adults and children operate in parallel. While children freely range in and out of the adult spaces, they have an autonomous social life that they create among themselves. Working and playing in mixed-age groups embeds social learning in everything else children do.

What children learn from their peers is how to establish social order: organize among themselves, share responsibilities and rewards, engage in healthy competition, and develop the capacity for tolerance, coordination, and personal initiation. In short, how to become a successful participant in society.

They also learn to regulate their emotions and what is acceptable social peer behavior. Many anthropologists anecdotally remark that they rarely see a child throw a tantrum. Children fuss when they are being weaned, but once they can walk and start keeping the society of other children, it’s unusual for kids to have an outburst if they can’t get what they want. Once a colleague brought her toddler to the field, and while the little girl was quite advanced in knowing her letters and numbers, the Maya children she played with were dumbfounded when she would scream if asked to share a treat or toy with the other kids.

Much distinguishes the social, economic, and learning environments of the past and the present, and of small-scale traditional and industrialized societies. Are these contrasts in childhood experiences meaningful or important when it comes to understanding how children learn?

There is no straightforward way to answer this, in part because the large body of literature on childhood learning has almost exclusively been conducted in industrialized populations, where schooling and growing up in small, nuclear households are the norm. Yet these societies represent less than 15 percent of the world’s population, limiting our ability to assess how cultural and ecological variation shapes social development.

There have been plenty of debates over parenting trends and educational practices in recent years that showcase how people in industrialized countries do appreciate other models of childhood learning. These include the “free-range childhood” and “natural childhood” movements, which advocate for children to have more independence and less adult supervision, especially outside. Many newspaper articles and blogs have critiqued “helicopter parenting,” whereby parents hover over their children at all times to ensure their safety or productivity. In schools, many educators push for split-grade classes and an emphasis on peer-to-peer learning.

These discussions may suggest an intuitive acknowledgment that kids learn cooperative and social skills best in mixed-aged groups, at their own pace, and in the company of one another. Certainly, adult-directed formal education is highly valuable in a world dependent on technological skills.

Yet, when it comes to learning social skills, the society of children is perhaps best.

Karen L. Kramer is a professor of anthropology at the University of Utah.