What Military Theory Tells Us About Future Space Warfare

What is it good for? 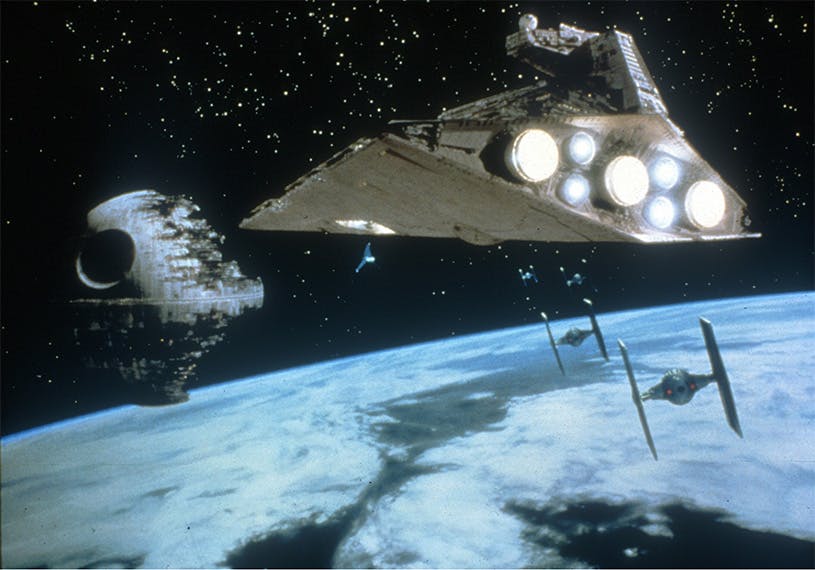 How would a space war play out? Given our current state of primitive space technology, we can hardly imagine, say, what kinds of weapons might be used. But let’s put our fantasies of plasma bombs and Death Stars aside and take a step back to inquire about strategy: the reasons for conflict and the broad outlines it might take. The basic principles of strategy haven’t changed since chimps first shuffled through the forest to maul vulnerable rivals and slowly wear down competing groups. We have every reason to expect that the same principles will apply to extraterrestrial combat.

The possibilities of interstellar warfare are of interest not only to science-fiction authors seeking new plotlines, but also to astronomers extremely perplexed about why we have not yet seen any signs of alien life. One somewhat depressing answer is that we aren’t unique and the galaxy is riven by military threats. Aggressive species may have nuked one another’s home planets and, out of fear of attack, the rest are laying low. Some scientists argue that we, too, should maintain a prudent silence to avoid experiencing The War of the Worlds in real life. Others, however, find alien warfare highly unlikely and think these battles we fight in space are much more likely to be among ourselves.

Neighboring civilizations might see the act of aggression and join the battle.

Janne Korhonen, an author and economics graduate student at Aalto University in Finland, is one of the world’s handful of interstellar military theorists (yes, these people exist). In 2013 he argued that aliens, even if in possession of vastly superior technologically, are very unlikely to attack us. To begin with, why would they bother? War is typically fought over resources. Almost one century ago, historian John Edwin Bakeless found that 14 of the 20 wars from 1878 to 1918 had economic motivations strongly connected to asserting control of natural resources. The number is even larger when you include wars of colonial conquest, which can be counted as no-contest resource-grabs.

But if aliens are looking for resources, an assault on Earth doesn’t make a whole lot of sense, since the gas giant planets and the asteroid belt offer huge repositories of materials for the taking. Sure, Earth does have the most varied minerals in the solar system because of the action of life and water, but just to get to our solar system would require huge amounts of fuel, making the whole venture rather pointless from a cost-benefit view. Only an alien species that requires our specific minerals (or needs to eat sentient carbon-based organisms) would trouble itself with such a voyage.

Nonetheless, if extraterrestrials did want to pick a fight with us, they would be running a huge risk. Korhonen argued that, unless they were 100-percent sure they could destroy us, they could never be assured of final victory. It is often said that advanced aliens would regard us as mere ants—and anyone who has ants in their house or yard knows they are almost impossible to eradicate. Even a few survivors could quickly multiply to repopulate the planet, while learning from the attacker’s technology and preparing a retaliation. Meanwhile, neighboring civilizations might see the act of aggression and join the battle, if only to protect their own interests. In light of this strategic calculus, aliens would be foolish to invade.

In science fiction we tend to fixate on alien-human warfare, but when it comes to star wars in actuality, the species we should really be worried about is our own. As we and our robotic descendants spread through the solar system, Earth will operate as the system’s capital or authority figure, being that it is the largest rocky planet as well as our place of origin. But Mars, Ceres, and other colonized bodies will, with time, develop their own economic and political infrastructures. Just looking at our own history, a desire for sovereignty by any of the off-world colonies might well lead to warfare, as could disputes over resources.

Carl von Clausewitz, the 19th-century Prussian military theorist, held that warfare has three main strategies: annihilation, attrition, and exhaustion. Science-fiction writers usually go for annihilation—a single decisive battle in which one side destroys the military capacity of its enemy. But the other two strategies are more common historically and would probably guide the course of an interplanetary war. Attrition means the gradual whittling down of military forces, while exhaustion generally refers to the erosion of industrial power and public will. In a space war, a full assault might be hard to pull off because of the vast distances and energy cost. But the antagonists could cut off supplies, bomb cargo ships, and jam radio signals. One side might give up even if not strictly defeated, simply because the costs have become unacceptably high.

Until Mars is fully terraformed, any colony developed there will be too fragile to launch a war.

Charles Cockell, a professor of astrobiology at the University of Edinburgh, argued in an essay in the recent volume Dissent, Revolution and Liberty Beyond Earth that we may be able to achieve interplanetary peace on the same principle that has (so far) forestalled a Third World War: mutually assured destruction. Space habitats are extremely fragile, and punching a large enough hole in the dome of an airlocked colony would be enough to kill thousands. Until Mars is fully terraformed, any colony developed there will be too fragile to launch a war, and the asteroids and outer-planet satellites will always be acutely vulnerable.

Earth, too, has its vulnerabilities, as Ian Crawford at the University of London and Stephen Baxter of the British Interplanetary Society pointed out in a paper last year. The planet’s gravity is stronger than that of its rival worlds, so any meteors launched at it will accelerate and hit the ground with devastating effect. For all parties, then, the costs of warfare in space will outweigh the benefits.

Maybe in space we just might achieve the peace that often eludes us on Earth.