What Oceanographers Can Learn From Their Animal Colleagues

When you need good data in rough seas, send in the elephant seals. 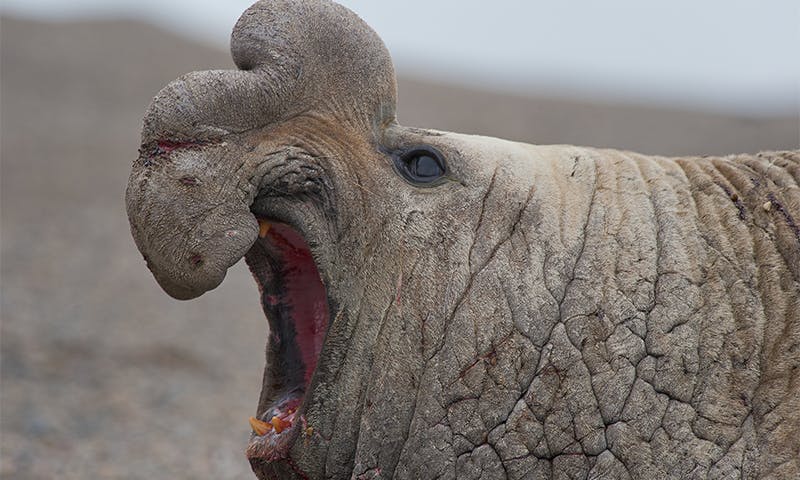 A gulp of air, a kick of flippers, and the elephant seal dives. Sunlight slants through the Southern Ocean’s melting roof of sea-ice, its solid dome shattered by the arrival of Antarctic summer. The seal—Mirounga, we’ll call her—descends many times each day to snatch fish and squid in her toothy jaws; she spends 90 percent of her life below the surface, thinks nothing of a thousand-foot foraging plunge. But now she’s diving deep, truly deep, galvanized by the clicks and squeals of an approaching pod of orcas. Mirounga can go places where killer whales can’t follow.

Two thousand feet below the surface. Three thousand. Four. The light fades to twilight, then to virtual black. The water grows colder, heavier, saltier. Mirounga barely feels it. Her thousand-pound body is insulated by blubber; her muscles themselves store oxygen; intricate vascular networks funnel warmth to her heart. She’s a mile below the surface now, the orcas a distant memory, swimming hard through the dense layer of seawater that creeps along the ocean’s floor and powers the planet’s currents, its weather, its climate. She joins this circumpolar flow, a red blood cell in the circulatory system of the Earth.

Mirounga is, at this point, generally unbothered by the odd, fez-like cap she’s worn for months. Nearly a year earlier, while Mirounga was hauled out on a rocky Antarctic beach to molt her old fur and grow a fresh coat, a flock of humans had tranquilized her and, for reasons she can’t fathom, glued a black box to the back of her head. The device weighs little more than a herring, and its stubby antenna offers only the faintest drag. No sooner had she lumbered back into the ocean, peeved but unharmed, than she’d more or less forgotten it was there.

The box, however, forgets nothing. It clings to her, a constant, silent companion, unceasingly gathering and storing information—depth, temperature, salinity—about the seawater through which she moves. It remains with Mirounga even now, as she finishes her dive and ascends through the ocean’s strata. At the sunlit surface it will convey its store of data to satellites orbiting through space as dark as the abyssal plain. Mirounga, wittingly or not, has become an oceanographer.

Modern oceanography has an extraordinary arsenal of instruments: moored buoys, gliders, ships, submersibles. But even our most impressive technology struggles to penetrate harsh marine environments. Gliders get hung up in polar ice; buoys are dislodged by the powerful currents that rake tropical shelves. Mirounga and other animals, by contrast, face no such restrictions. They navigate oceans nearly in their entirety, during every season. “They go so far and so deep,” says Sara LaBrousse, a marine ecologist at France’s National Center for Research. “They are wonderful oceanographers.”

The notion of recruiting marine creatures as involuntary field technicians isn’t a novel one. As early as 2001, researchers were turning to beluga whales as “deployment platforms” for sensors in Arctic fjords.1 The last decade or so, however, has seen an explosion in animal-based oceanography. Instruments have simultaneously grown smaller and more advanced, making it possible for scientists to obtain more data from a broader diversity of non-human assistants. Shearwaters and albatrosses have recorded wind speeds and directions2; king penguins have provided temperature profiles for the Southern Ocean3; sixgill sharks have retrieved data on dissolved oxygen.4 We owe some of our most fundamental marine knowledge to animals, and eventually we may even owe them our lives: A fleet of sensor-bearing sea turtles in the Indian Ocean is today helping researchers study tropical cyclones, and perhaps predict their occurrence.5

“They have collected data in places where we basically knew nothing.”

No animals, however, are quite so suited for oceanography as elephant seals. Elephant seals—both southern (Mirounga leonina) and northern (Mirounga angustirostris) species—travel widely and dive to astonishing depths, passing through the entirety of the water column as they plunge to feed and evade predators. (Southern elephant seals have been tracked as deep as 7,800 feet, a marine-mammal record bested only by beaked whales.6)  Unlike cetaceans, they haul out on sea-ice and terra firma, and so are relatively easy to capture and tag; unlike fishes, they surface to breathe, giving their sensors regular opportunities to connect with satellites. Elephant seals have taught us when sea ice coheres and breaks up,7 how Antarctic bottom-water drives ocean circulation,8 where phytoplankton blooms in the North Pacific.9

“They have collected data in places where we basically knew nothing,” says Fabien Roquet, an oceanographer at the University of Gothenberg. “They can stay in regions that are completely covered by ice and they will always find a crack to the surface. They’re amazing animals, really.”

And elephant seals, like most animals, don’t just visit places that our instruments can’t. They visit places that are fundamentally interesting. Clive McMahon, an Antarctic ecologist at the University of Tasmania, notes that marine life congregates near the same features that drive physical processes such as currents: upwelling zones, thermoclines, seamounts, ice cavities where nutrient-rich meltwater seeps into the ocean. “If elephant seals are going to one place in the Southern Ocean all the time, they’re telling us that’s an important place,” McMahon says—vital both for oceanographers seeking to understand our changing oceans and for the animals themselves.

You might thus envision seals like Mirounga as partners in their own conservation, guides who inadvertently lead their human collaborators to the sites of future Marine Protected Areas. They obtain our data, we safeguard their habitat.

For years, the world’s animal-tagging oceanographers were only vaguely connected—“this kind of loose consortium of crazy people that want to catch seals and stick things on them,” as McMahon put it. That changed in 2020, when a group of researchers announced the creation of Animal Borne Ocean Sensors, or AniBOS: a global network, co-chaired by McMahon and Roquet, that would collect and standardize the data gathered by marine animals, and provide a platform for researchers around the world to access it. No longer would the crazy seal-catchers operate in isolation; instead, they would belong to a broader community—one that, per McMahon, currently includes around 60 researchers from 27 countries—sharing information for the common oceanographic good. “Our goal is to build a database that will still be useful in 100 years,” Roquet says.

The official members of AniBOS, now an endorsed program of the United Nations Ocean Decade, are, of course, human. Yet it wouldn’t exist without turtles, penguins, and seals—none of whom are willing participants in the scientific process, even if their broader populations stand ultimately to benefit. Being captured and tagged is an unavoidably invasive process: Mirounga would have been tranquilized with a dart-gun, injected with a general anesthetic, and immobilized for around 30 minutes while biologists affixed her hat. Marine scientists are almost invariably conscientious, and McMahon’s research has suggested that elephant seals aren’t harmed by being forced to carry sensors, which, after all, are minuscule compared to the pinnipeds’ own gargantuan bodies.10 Other studies show that any minor ill effects from human handling appear to wear off quickly.11 Nonetheless, the explosion of animal-based oceanography creates the potential for harm. “We just worried that with the spread of the use of animals, some people do not consider the impact enough,” says LaBrousse.

They obtain our data, we safeguard their habitat.

Part of AniBOS’s mission, then, is ensuring that its bipedal constituents treat their non-human colleagues squarely. The network’s members are encouraged to tag as few animals as possible and to avoid pain and distress. Labrousse, who has worked with pinniped partners including elephant seals, crabeater seals, and Weddell seals, checks the health and body condition of any creature she’s thinking about tagging; if the animal is in poor shape or lactating, she’ll leave her alone. She endeavors to keep the “capture time” brief, covers the animal’s head to minimize stress, and stays as close to silent as she can. “We only accept data from researchers who have followed the ethics guidelines,” says LaBrousse, who co-chairs AniBOS’s Ethical Advisory Board.

As our technology evolves, it becomes ever more vital that we duly respect our animal associates. The hat-like sensor that Mirounga wears is a simple one, capable of measuring conductivity, temperature, and depth: valuable enough for determining some of seawater’s key properties, but limited in its utility. The instruments that her offspring will someday carry, by contrast, could be far more sophisticated. Picture a single package that also registers light, chlorophyll, bioluminescence, and even, conceivably, the presence of nearby illegal fishing vessels. As much as her collaborators have relied on Mirounga, they may ask even more of her daughters.

Not long after Mirounga’s deep dive, it is again time for her to molt. She returns to her favorite Antarctic beach and hauls out, congregating with hundreds of her fellow elephant seals in communal wallows, molt-sites that Mirounga’s kind has used for so long that her ancestors’ fur lies in three-foot drifts atop sand and rock.12 Over the next six weeks her hair and skin slough off in ragged sheets, a shedding so thorough that the humans who study her refer to it as a “catastrophic” molt. She fasts the entire time, metabolizing 300 pounds of her accrued body mass.

One morning, mid-molt, she loses the pelage that covers her head and, with it, the sensor she’s worn for the last year. The box falls to the beach with a clatter. There Clive McMahon, or a scientist like him, will eventually recover it for future deployment, thanking, as he picks it up, his pinniped colleagues for their part in this interspecies collaboration.