When Stress Comes with Your Mother’s Milk

Stress hormones in breast milk may help prepare us for a turbulent world. 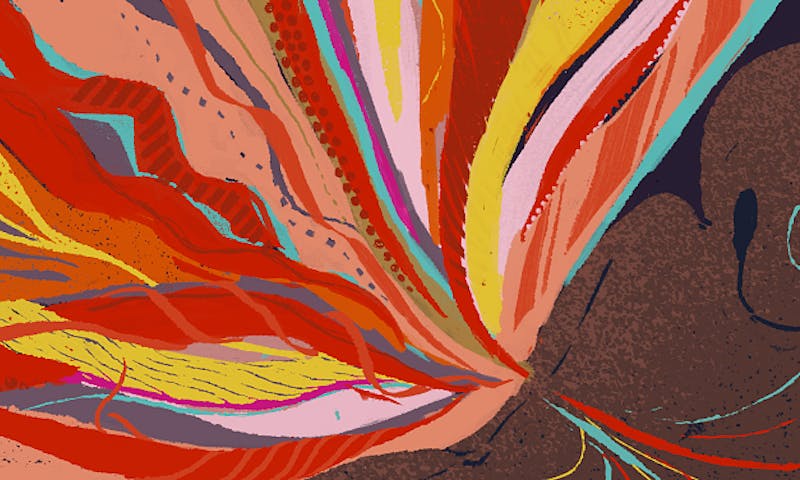 A few years ago, when my oldest daughter was still nursing, I went through a panicky phase. I had committed to a run of public-speaking engagements, and I constantly worried that I would flub them. Before each event, I pumped milk for the baby and left her with the sitter, who eventually confided that she dreaded my departures as much as I did. While I was away, she told me, my daughter was irritable and inconsolable. She would cry in the stroller; she would cry when held. Refusing to nap after feeding, she back-arched and bawled.

“We’re like quantum particles!” I marveled. My daughter felt how I felt—from across the city.

I flashed on all those times I had pumped between nervous preparations, my heart racing. Had I passed my stress on to my daughter through my breast milk? When I posed this question to Laura Glynn, a psychologist at Chapman University, she said it was plausible. Along with the proteins, minerals, vitamins, fats, and sugars that nourish an infant, the antibodies that help fight infection, and the growth factors that aid in tissue development, milk contains a cocktail of hormones, including the stress hormone cortisol. The body circulates cortisol during trying or fearful situations—spats, traffic jams, sports competitions, deadlines. The hormone orchestrates aspects of metabolism and behavior, including triggering the release of sugars into the bloodstream, giving us that burst of energy we might need to fight or flee.

Even in modern human societies, there may be conditions in which a wary vigilance could be advantageous.

In nursing babies, cortisol gets a red-carpet welcome. An infant’s intestinal tract responds to its mother’s milk by sprouting receptors that detect the hormone, activating neurochemical signals that can travel all the way to the brain. These signals may influence a baby’s stress response and the development of brain regions that regulate emotions such as fear and anxiety. Breastfed babies also have an average 40 percent more cortisol in their system than their formula-fed peers, suggesting that the increase comes from milk.

Scientists don’t yet know the long-term effects of secondhand cortisol, or even whether its presence in nursing babies can be described as stress. I can’t say, for instance, whether the cortisol in my milk, possibly spiked by my own anxiety, caused my daughter to feel anxious. That’s probably too simplistic a view.

But increasingly, studies by Glynn and others are showing that a mother’s milk, in one way or another, helps to shape her child’s behavior and temperament, and may deliver useful information about the environment she’s growing up in. Perhaps my milk was sending my daughter a message: Here’s what you need to know about the world. Act accordingly.

Most evidence for the link between milk cortisol and cognition comes from animals. Experiments on rats dating back to the 1980s show beneficial effects. When researchers spiked nursing mothers’ water with corticosterone (the rodent equivalent of cortisol), mimicking mild stress, their pups learned faster, had better memories, and were less anxious and more exploratory during stress tests, suggesting a better ability to cope. One experiment found that male pups from corticosterone-dosed mothers grew extra cortisol receptors in a brain region involved in regulating the body’s reaction to stress, which may help temper this response. In rodents at least, stress during motherhood seems to embolden offspring.

In primates, however, it appears to do the opposite. In a 2014 study, Katie Hinde, a behavioral biologist at Arizona State University, and her colleagues tested how cortisol levels in the milk of over 100 mother rhesus macaques correlated with their babies’ temperament when put in a novel environment. Previous research suggests that human babies who cry or become agitated in unfamiliar situations are more likely than less-reactive babies to develop timid, shy personalities. Could cortisol be partly responsible? Hinde’s study nudges the answer toward “yes.” The higher the level of milk cortisol, her team found, the more nervous and timid a baby monkey acted in the presence of new things, such as a new toy or a stranger’s face.

Glynn has observed a similar connection in humans. In studies published in 2007 and 2013, she and her colleagues tested cortisol levels in nursing mothers’ blood and milk, respectively, and then surveyed them about their infants’ behavior and temperament: How often during the past week did the baby startle to a loud new sound or sudden noise? When frustrated, how often did the baby calm down within five minutes? As in Hinde’s macaque study, the results showed a significant association between high cortisol levels and nervous, jittery babies. (For unclear reasons, the second study found this trend only among girls, who also seem to be more sensitive to cortisol exposure in the womb.)

Of course, a link doesn’t necessarily imply a cause. Maybe mother and child share genes that make both vulnerable to stress. Maybe stressed-out moms are more likely to rate their babies as fearful, or to treat their kids in a way that makes them more high-strung. Or maybe a fussy baby simply gives mom more stress, causing her cortisol levels to rise, rather than the other way around. Glynn considered these confounding factors and devised a solution: She tested and surveyed mothers with formula-fed babies, too. In this control group, the link between cortisol and temperament vanished.

The message, it seemed, was in the milk.

Don’t let these findings stress you out,” Hinde insists. She doesn’t want anxious moms like me to feel uneasy about breastfeeding. Cortisol levels don’t always match feelings of psychological stress, she points out. And even the most zen-like nursing women have cortisol in their milk, which rises and falls with the rhythms of the day, as do the temperaments of their Buddha-like babies. On the contrary, she suspects that formula-fed babies may be missing out on important signals that hormones like cortisol convey. By better understanding these signals, scientists could create better formulas for mothers who can’t nurse, or choose not to.

The current consensus among those who study milk cortisol is that it serves an evolutionary purpose: to help babies adapt, physiologically and behaviorally, to the world in which they are born. Cortisol reflects a mother’s circumstances—her resources, her social conflicts, and physical threats—and calibrates her baby’s behavior accordingly. In the macaque study, for instance, Hinde’s team found that monkey mothers with high levels of milk cortisol—those who tended to have more fearful babies—were also more likely to be new mothers. (Hormone levels were much lower in mothers who already had four or more children.) The reason for this, Hinde suspects, has to do with energy. Young mothers’ bodies, including their mammary glands, are still developing, and so they have fewer resources than older moms to devote to milk production. As a result, their milk contains less energy. Perhaps the cortisol in it provides a warning: Conserve energy by prioritizing growth, not play. In other words, be fearful. Cautious babies are less likely to spend precious calories exploring, and instead will use most of this energy to grow and stay healthy.

Even in modern human societies, there may be conditions in which a wary vigilance could be advantageous. “Living in a very dangerous household or neighborhood, it might be safer than having a very surgent, outgoing temperament,” Glynn says. And if a short-term spike in milk cortisol causes some stormy behavior in a baby—as my own experience might suggest—that, too, may have a silver lining. “A stressed mom may have a lot on her mind, and being fussy may be one of the tactics a baby uses to get the attention he or she needs from Mom and other caretakers,” Hinde says. In our evolutionary past, this syncing may have meant survival.

A mother’s stress may nudge her baby one way or another, but cortisol alone doesn’t dictate destiny.

Some experts suspect that moderate amounts of milk cortisol (in what’s considered a normal range), together with the nurturing nature of breastfeeding, could help protect babies against the negative effects of stress later in life. A 2006 study of nearly 5,700 10-year-olds found that those who had been breastfed as infants were less anxious when confronted with a major stressor, such as parental divorce or separation. This link persisted even after the researchers adjusted for confounding factors, such as social class and education level.

There is some evidence that this resiliency stems from the fact that cortisol acts on the brain pathway responsible for blunting pain. Cortisol is also involved in the development of the body’s central stress-response system, known as the hypothalamic–pituitary–adrenal axis. Low levels of the hormone during infancy may help habituate this system to mild stress, thereby training it to “dial down” the body’s reaction to adversity.

If low or intermittent doses of milk cortisol can act as an inoculant against stress, what happens when mom’s cortisol meter is chronically “turned to 11 with the knob broken off,” as Hinde puts it? She hopes to get an answer when her young macaque subjects reach maturity. “When the data are in,” she speculates, “we’ll find that there are indeed some signatures that last a lifetime—or are even transmitted to the next generation.”

However, she is quick to add that even if constant exposure to large amounts of cortisol during infancy turns out be harmful, other contributions to development—such as nurturing and genetics—could compensate for or override any negative impacts. At the same time, other ingredients in breast milk may work alongside cortisol to influence infant temperament. For example, studies suggest that certain strains of Bifidobacteria and Bacteroides, which are transferred live in milk, produce molecules that may have a calming effect. Babies with more of these bacteria in their gut tend to be less anxious and fussy. Milk also contains complex sugars, known as human milk oligosaccharides, that feed a baby’s microbiome, and each nursing mother has her own heritable, diet-dependent, ever-changing mix of 50 or so types. It’s possible that this custom concoction further shapes her baby’s disposition and mood by manipulating the gut flora.

A mother’s stress, in other words, may nudge her baby one way or another, but cortisol alone doesn’t dictate destiny. “This one hormone, in one aspect of parenting, is just one of the rivets holding the plane wing on. One rivet can break, and the plane still flies,” Hinde writes in her blog “Mammals Suck … Milk.” “Development is a multi-factorial system, and rarely is any one single aspect the linchpin.”

After my stint as a public speaker ended, my daughter’s fussiness subsided. She has since grown into a sweet, spirited 5-year-old, no harm done. Still, I can’t help but wonder: Could my fluctating stress during her nursing days have anything to do with her abundant caution on the jungle gym? Or her composure during her first violin recital, despite a raging ear infection?

I wish for my children to encounter hardship in just the right doses: not so much that they become too fearful, nor so little that they become overconfident. But sooner or later, I know, life will throw some tough punches. It’s comforting to think that my breast milk may have given my kids some of the first lessons on how to cope.

Jena Pincott is a science writer and author of Do Chocolate Lovers Have Sweeter Babies?: The Surprising Science of Pregnancy.

This article was originally published in our “Stress” issue in December, 2015.