Why Do We Get Cyber-Sick?

The impact of perceived motion. 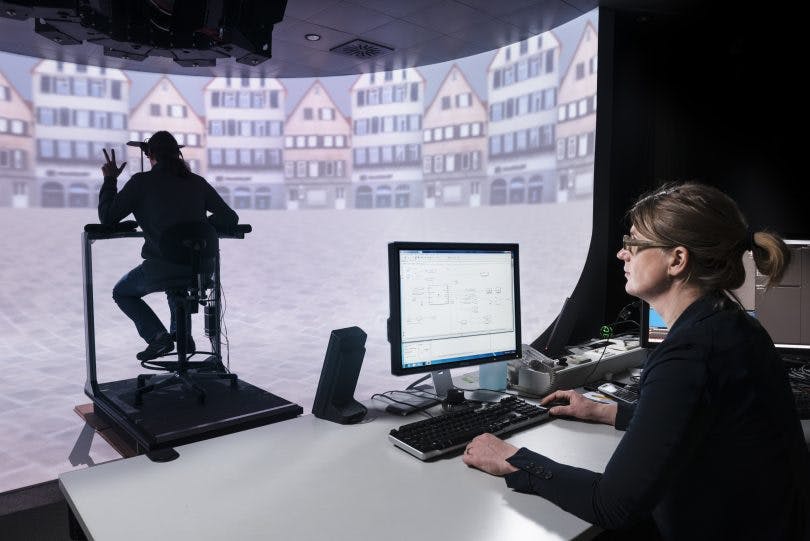 Motion sickness is an ancient phenomenon, which also occurs in modern virtual reality environments. However, it is still relatively unknown what causes this physical reaction. Suzanne Nooij and her colleagues at the Max Planck Institute for Biological Cybernetics looked at motion sickness occurring while watching moving scenes, and found that it is primarily dependent on the strength of the movement illusion this causes: The stronger the sense of self-motion, the more sickness is experienced. The new findings ask for refinements of previous theories of motion sickness.

Probably everybody is familiar with the train illusion: The feeling that your train is departing when, in fact, you see the train at the neighboring platform departing. This illusion shows that motion of your visual surroundings can give a compelling sense of self-motion in stationary observers. This phenomenon is exploited in many virtual reality environments and vehicle simulators. A negative side effect, however, is that prolonged exposure to a visually induced sense self-motion can give rise to motion sickness: You may get a headache, or feel dizzy, or nauseous. Although this is a very old problem, there are still very different views on its causes and cures. Dr. Nooij and her colleagues from the Department of Prof. Bülthoff at the MPI for biological Cybernetics tested three different theories in collaboration with the Johannes Gutenberg University in Mainz.

For this study participants came to the panoramic lab at the MPI multiple times and viewed a visual scene that rotated around them, as if they were in a merry-go-round. Each time the experimental conditions were different. During the 20-minute test, the researchers measured the level of motion sickness, the strength of the motion illusion, and the participant’s eye and head movements. The results clearly show that of all these factors, the strength of the motion illusion is the most important one: More sickness is experienced in conditions that give a stronger motion illusion. By varying and comparing the motion illusion strength within the same participants, this is the first study demonstrating this effect so clearly. It shows that an illusion of self-motion, and not a moving scene per se, is a prerequisite for visually induced motion sickness.

A second finding was that even perceived motion at constant velocity, and not only during accelerations, resulted in motion sickness. This contradicts previous beliefs and calls for a refinement of one of the most widely adopted motion sickness theories—the Sensory Conflict theory. The Virtual Reality team of Prof. Bülthoff and Suzanne Nooij are currently testing the possibility that it is not so much a conflict between the senses that causes motion sickness, but a conflict in what we experience as being moving (ourselves) and what is stationary (the surroundings).

This article was originally published by Max Planck Neuroscience on April 24, 2017. The relevant study can be retrieved here.