Why Doctors Should Start Taking Your Past Spiritual History

Sharing what meaning you take from illness can enhance your treatment and sense of well-being. 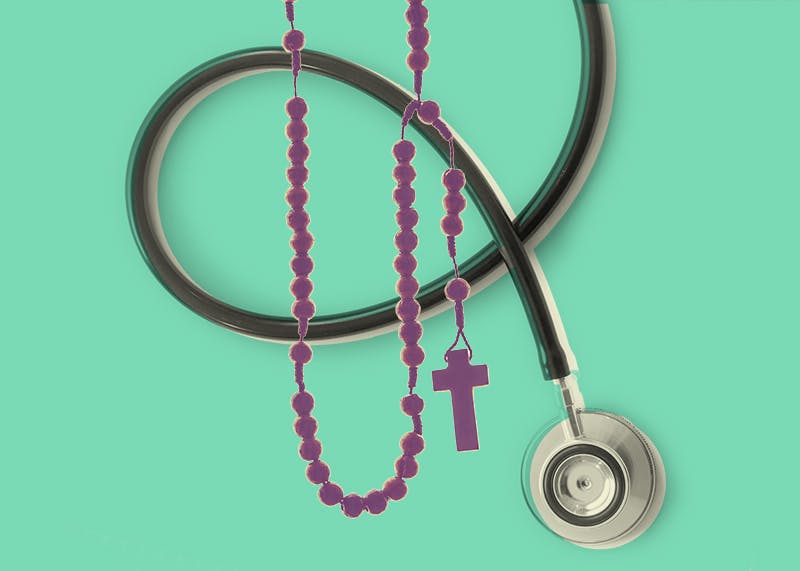 A little over a decade ago, Farr Curlin, a physician and professor of medical humanities at Duke Divinity School, became curious about the spiritual lives of his colleagues. He already knew that patients’ religious beliefs and communities matter: Both influence medical decisions and change the meaning of illness. But the influence of physicians’ religiosity on their work was relatively unknown.

So he and his colleagues conducted a national survey of physicians’ religious characteristics. He found that, compared to a sample of the general U.S. population, physicians were twice as likely to cope with their own major life problems without relying on a “higher power.” Doctors were also less likely to carry their religious beliefs into other dealings in life. Curlin’s survey was the first of many to show that doctors are less inclined to bring up spiritual and religious matters with patients and their families, even though addressing these dimensions of illness can help coping with death, and even though patients frequently welcome the discussion.

“When spiritual needs are not met,” concluded Michelle Pearce, a University of Maryland clinical psychologist and her colleagues in a 2012 paper, “patients are at risk of depression and a reduced sense of spiritual meaning and peace.” Yet according to a 2013 study published in the Journal of Clinical Oncology, despite recognizing the importance of spiritual care to patients, physicians and nurses infrequently provide it. A 2012 report in the same journal found that most cancer physicians, nurses, and patients believe such care would have a positive impact.

“It is mere prejudice to assert that all spirituality in health care is quackery.”

The evidence suggests that physicians might do well to take a Past Spiritual History, similar to the Past Medical and Past Surgical Histories that are a routine part of patient-doctor encounters. A Past Spiritual History represents a biopsychosocial-spiritual approach to understanding illness, which may not only “enrich the dialogue between patients and health providers,” as one 2006 study concluded, but also inform what treatments are acceptable within a given patient’s system of values. “For many people, this spiritual history unfolds within the context of an explicit religious tradition,” wrote Christina Puchalski, a professor of medicine at George Washington University, and colleagues, in the Journal of Palliative Care. “For others it unfolds as a set of philosophical principles or significant experiences.”

Why has the medical community dragged its feet in providing adequate spiritual care? There are several reasons. First off, if doctors are less likely to be spiritual or religious, they may not even think to bring those sorts of concerns up with their patients. After all, their years of scientific and medical training are steeped in a skeptical, materialist worldview. And hardly any of those hours encountering the dead in a cadaver lab or the nearly dead during I.C.U. rounds prepares them to take on the weighty role of spiritual interrogator.

Another barrier is the impression among many physicians that spiritual care may involve a slippery slope to proselytizing, which violates the impartiality central to the provision of unbiased medical care. But as Daniel Sulmasy, a physician and philosopher (and former Franciscan friar) at Georgetown University, points out, “Clinicians should never use their power over patients to proselytize, but this does not imply that they must ignore the genuine spiritual concerns raised by patients. Medicine must also eschew quackery, but it is mere prejudice to assert that all spirituality in health care is quackery.”

More training in spiritual care would be useful, but physicians must overcome the sense that such training would be useless unless they have all the answers to a patient’s spiritual concerns. I recently cared for a critically ill patient in the I.C.U. whose mother was visibly distraught about her son. I asked her if she was religious. She said that she was Christian, but since she lived hundreds of miles away, she could not attend her church while her son was ill. I mentioned that there were many churches in the neighborhood surrounding our hospital and that perhaps she could temporarily visit one that fit her beliefs. This hadn’t occurred to her, and she felt some relief that I had considered her perspective. Even the barest alertness can help—the conversation took no particular training on my part, just an attentiveness to her spiritual needs, which happened to fall in the Christian tradition but could have easily been part of a Buddhist, Islamic, Hindu, Jewish, or some other secular or philosophical ethic.

And when a patient asks me a question that I probably cannot answer in satisfying terms—“Is there still hope?” for example—I often refer the patient or their surrogate to someone whose response may be more helpful, like a hospital chaplain. Practitioners and patients alike can learn to recognize the limits of the type of spiritual care doctors can offer and know when to outsource concerns that may not be appropriate, even for a doctor trained in spiritual care, to address.

I think there is much to gain by taking the religious and spiritual and philosophical lives of patients seriously. These discussions not only strengthen the doctor-patient relationship, but may also decrease medical interventions by evaluating therapies through the lens of the patient’s goals and values. As William Osler, the 19th century master diagnostician from Johns Hopkins Hospital, known as the father of modern medicine, said, “The good physician treats the disease; the great physician treats the patient who has the disease.” His words may ring truer today, when the demands of new technology on our time, among other things, do more to divide practitioners from their patients than ever before. Certainly a clinician can use MRIs and genetic mutation analysis to more deeply understand the disease, but have physicians moved closer to understanding the whole person before them—or at the least her motivations, ambivalences, anxieties, and hopes?

The Past Spiritual History is one way to do just that.