Why Hasn’t the World Been Destroyed in a Nuclear War Yet?

The precariousness of game theory. 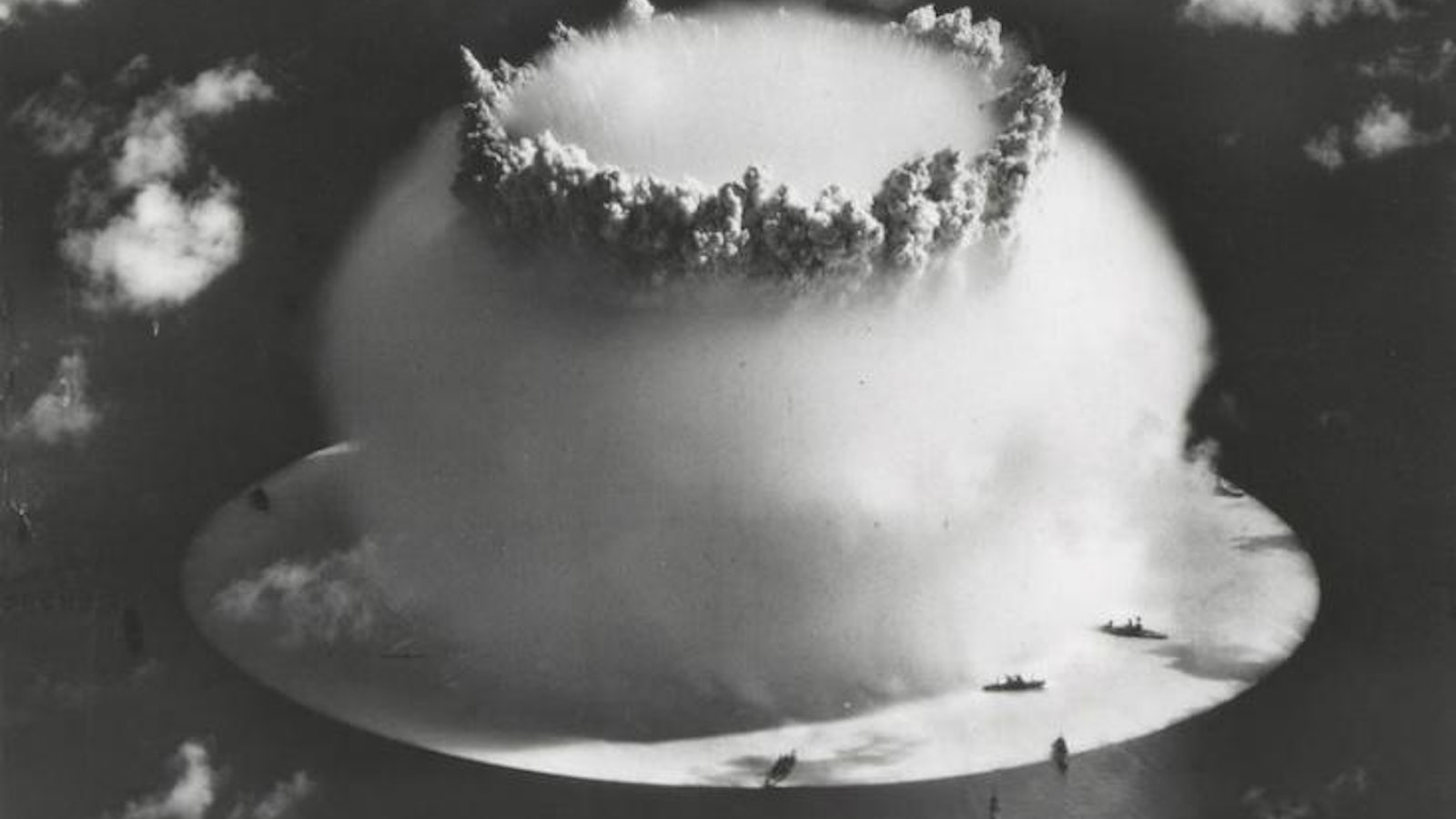 When opposing nations gained access to nuclear weapons, it fundamentally changed the logic of war. You might say that it made questions about war more cleanly logical—with nuclear-armed belligerents, there are fewer classic military analyses about morale, materiel, and maneuverings. Hundreds of small-scale tactical decisions dissolve into a few hugely important large-scale strategic ones, like, What happens if one side drops a nuclear bomb on its nuclear-armed opponent?

Using a dangerous weapon like a nuclear bomb can of course provoke dangerous responses. If one country crosses the nuclear line, what will its opponent do? What will its allies, or other nuclear-armed states do? The decision to use a nuclear weapon is practically nothing next to the chain reaction it begins. The act of one nation simply developing a nuclear weapon can provoke a “nuclear proliferation cascade,” as other nations, concerned about new nuclear-armed rivals, rush to follow suit. This is cited as one reason why it’s so important to prevent Iran from building its own nuclear weapons.

“The Soviet Union was geared to expect an attack and to retaliate very quickly to it. It was on hair-trigger alert.”

During the Cold War, the important thinking about using nuclear weapons didn’t come from old military wisdom but from game theory, a new way to understand strategic decision-making. This analytical approach suggested that the standoff between the U.S. and USSR represented a Nash equilibrium: Neither superpower had reason to preemptively launch a nuclear attack, as it would surely provoke a devastating counterattack. At the same time, neither would disarm significantly enough to leave itself unable to retaliate to a preemptive strike. The doctrine of mutually assured destruction (or MAD, named somewhat facetiously by mathematician John von Neumann) seemed to keep the superpowers at a peaceful balance point. But it’s unsettling to live in a world whose existence is maintained only by the threatening logic of the Nash equilibrium.

And there are reasons to believe that the cold nature of the Cold War was even more precarious than it seemed. Paul Bracken, an international-security expert at Yale, argued that the same kind of interlocking forces that propelled European powers into World War I also existed during the final escalation of the Cold War, in 1983:

“What set off the interlocking alerts of the European armies in 1914 was not the isolated assassination of the archduke in Sarajevo but the decision to mobilize [to prepare armies for war]. The effect of the thousands of orders issued was to create an unstoppable chain reaction of reinforcing alerts. The alerts acted like ratchets, step-by-step moving Europe into war but unable to function in reverse toward peace…

In broadest terms, the danger facing the world is that the superpowers have institutionalized a major nuclear showdown. Today’s complex nuclear defense system is strongly reminiscent of the institutionalized conflict mechanisms of the early twentieth century… The abrupt suddenness of World War I surprised everyone. Yet, in retrospect, almost nothing else could have occurred, given the institutionalized mobilization plans and firepower developed in the preceding decade. The same is true today.”

One particularly ominous example of this nuclear deployment was the Soviets’ “Dead Hand” system, which has only come to light since the end of the Cold War. This was a “fail-deadly” (as opposed to “fail-safe”) system aimed at giving the Soviet Union the ability to destroy the West even if the nation had already been devastated, its leadership killed. Dead Hand included sensors that would detect whether the country had suffered a nuclear attack; if so, it would indicate that it was time to launch long-range nuclear missiles. A couple of Soviet army officers secured in a small, spherical bunker deep underground—“probably the most secure place of all time in the Cold War”—could then press the button to unleash armageddon. Almost unbelievably, the Soviet leadership failed to notify the West that it had built this seemingly impregnable nuclear deterrent. (In the Cold War satire Dr. Strangelove, the Soviet Union deployed a similar “doomsday device” and also neglected to tell the world about it. In the film, Dr. Strangelove points out that not telling anyone obviates the deterrence of any deterrent device; the real-life Soviets seem to have missed the point.)

Despite the ongoing tensions and hair-trigger defense mechanisms, the nuclear-attack infrastructures of the two superpowers were never set into motion. In fact, in the years since then, we have learned more about many episodes where we did nearly suffer a nuclear cataclysm but managed to avoid it.

For instance, in 1983, Stanislav Petrov was working as an air-defense officer in Oko, Russia. One day his facility’s new nuclear early-warning system reported that five missiles were incoming from the United States. Petrov concluded it was probably a glitch in the new computer and declined to tell his superiors, who may have taken a more combative tack. “The [U.S.–Soviet] relationship had deteriorated to the point where I think the Soviet Union…was geared to expect an attack and to retaliate very quickly to it. It was on hair-trigger alert,” said nuclear-security expert Bruce Blair. “The false alarm that happened on Petrov’s watch could not have come at a more dangerous, intense phase in U.S.–Soviet relations.” He judged it to be “the closest we’ve come to accidental nuclear war.”

During the height of the Cuban missile crisis in 1962, an obscure Soviet submarine officer named Vasili Arkhipov may also have saved the world from nuclear destruction. The U.S. Navy was dropping depth charges on Arkhipov’s B-59 sub as a warning to surface and leave the vicinity of Cuba. The other two senior officers, thinking the Americans were engaged in a full-out assault, wanted to launch the sub’s nuclear torpedo at a nearby U.S. aircraft carrier, which likely would have precipitated an escalating nuclear back-and-forth. Arkhipov vetoed the idea, and the sub safely surfaced and returned to Russia.

Even after the sub incident was resolved, the larger missile crisis remained. There were plenty of moments when the standoff might have broken down and belligerent impulses taken hold. Former secretary of state Dean Acheson said it was “plain dumb luck” that got us through the crisis with no nuclear detonations.

But after all these nuclear near-misses, one starts to wonder if it really is plain dumb luck. The Nash equilibrium accurately describes a certain kind of rational, perfectly logical approach to choices under conflict. And exactly in keeping with game theorists’ advice, the USSR and U.S. went to great lengths to make sure their arsenals would be feared as legitimate threats. Yet each time they had an opportunity to make good on those threats—to launch a crushing response to an apparent attack or mercilessly exploit a weakness, as many armchair analysts recommended—something held them back: a disobedient soldier, a circumspect engineer, an optimistic leader. The two nations were engaged in a battle of wills, staring each other in the eyes, and they both blinked. Repeatedly.

Maybe, when millions of lives hang in the balance, people are not so rationally cold-hearted as those old game-theory models imply. Or maybe they’re using a different kind of rationality.

Amos Zeeberg is a freelance journalist who covers technology and science.