Why Is M-Theory the Leading Candidate for Theory of Everything?

The mother of all string theories passes a litmus test that, so far, no other candidate theory of quantum gravity has been able to match. 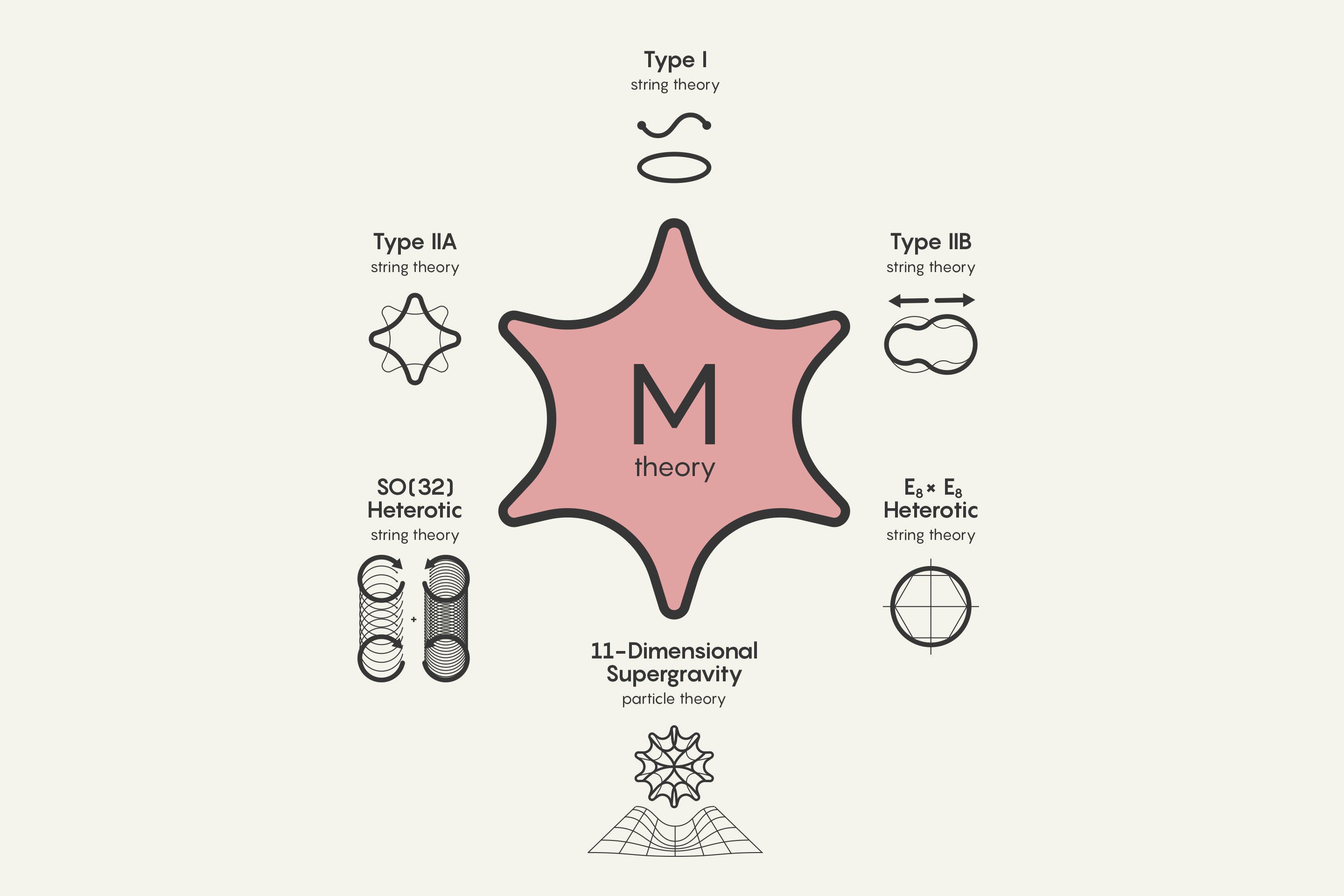 It’s not easy being a “theory of everything.” A TOE has the very tough job of fitting gravity into the quantum laws of nature in such a way that, on large scales, gravity looks like curves in the fabric of space-time, as Albert Einstein described in his general theory of relativity. Somehow, space-time curvature emerges as the collective effect of quantized units of gravitational energy—particles known as gravitons. But naive attempts to calculate how gravitons interact result in nonsensical infinities, indicating the need for a deeper understanding of gravity.

String theory (or, more technically, M-theory) is often described as the leading candidate for the theory of everything in our universe. But there’s no empirical evidence for it, or for any alternative ideas about how gravity might unify with the rest of the fundamental forces. Why, then, is string/M-theory given the edge over the others?

The theory famously posits that gravitons, as well as electrons, photons, and everything else, are not point-particles but rather imperceptibly tiny ribbons of energy, or “strings,” that vibrate in different ways. Interest in string theory soared in the mid-1980s, when physicists realized that it gave mathematically consistent descriptions of quantized gravity. But the five known versions of string theory were all “perturbative,” meaning they broke down in some regimes. Theorists could calculate what happens when two graviton strings collide at high energies, but not when there’s a confluence of gravitons extreme enough to form a black hole.

Then, in 1995, the physicist Edward Witten discovered the mother of all string theories. He found various indications that the perturbative string theories fit together into a coherent nonperturbative theory, which he dubbed M-theory. M-theory looks like each of the string theories in different physical contexts but does not itself have limits on its regime of validity—a major requirement for the theory of everything. Or so Witten’s calculations suggested. “Witten could make these arguments without writing down the equations of M-theory, which is impressive but left many questions unanswered,” explained David Simmons-Duffin, a theoretical physicist at the California Institute of Technology.

Another research explosion ensued two years later, when the physicist Juan Maldacena discovered the AdS/CFT correspondence: a hologram-like relationship connecting gravity in a space-time region called anti-de Sitter (AdS) space to a quantum description of particles (called a “conformal field theory”) moving around on that region’s boundary. AdS/CFT gives a complete definition of M-theory for the special case of AdS space-time geometries, which are infused with negative energy that makes them bend in a different way than our universe does. For such imaginary worlds, physicists can describe processes at all energies, including, in principle, black hole formation and evaporation.  The 16,000 papers that have cited Maldacena’s over the past 20 years mostly aim at carrying out these calculations in order to gain a better understanding of AdS/CFT and quantum gravity.

This basic sequence of events has led most experts to consider M-theory the leading TOE candidate, even as its exact definition in a universe like ours remains unknown. Whether the theory is correct is an altogether separate question. The strings it posits—as well as extra, curled-up spatial dimensions that these strings supposedly wiggle around in—are 10 million billion times smaller than experiments like the Large Hadron Collider can resolve. And some macroscopic signatures of the theory that might have been seen, such as cosmic strings and supersymmetry, have not shown up.

Other TOE ideas, meanwhile, are seen as having a variety of technical problems, and none have yet repeated string theory’s demonstrations of mathematical consistency, such as the graviton-graviton scattering calculation. (According to Simmons-Duffin, none of the competitors have managed to complete the first step, or first “quantum correction,” of this calculation.) One philosopher has even argued that string theory’s status as the only known consistent theory counts as evidence that the theory is correct.

The distant competitors include asymptotically safe gravity, E8 theory, noncommutative geometry and causal fermion systems. Asymptotically safe gravity, for instance, suggests that the strength of gravity might change as you go to smaller scales in such a way as to cure the infinity-plagued calculations. But no one has yet gotten the trick to work.

Lead image: M-theory unifies in a single mathematical structure all five consistent versions of string theory (as well as a particle description called supergravity). It looks like each of those theories in different physical regimes. Credit: Olena Shmahalo/Quanta Magazine