Why Nature Prefers Couples, Even for Yeast

Some species have the equivalent of many more than two sexes, but most do not. A new model suggests the reason depends on how often they mate. 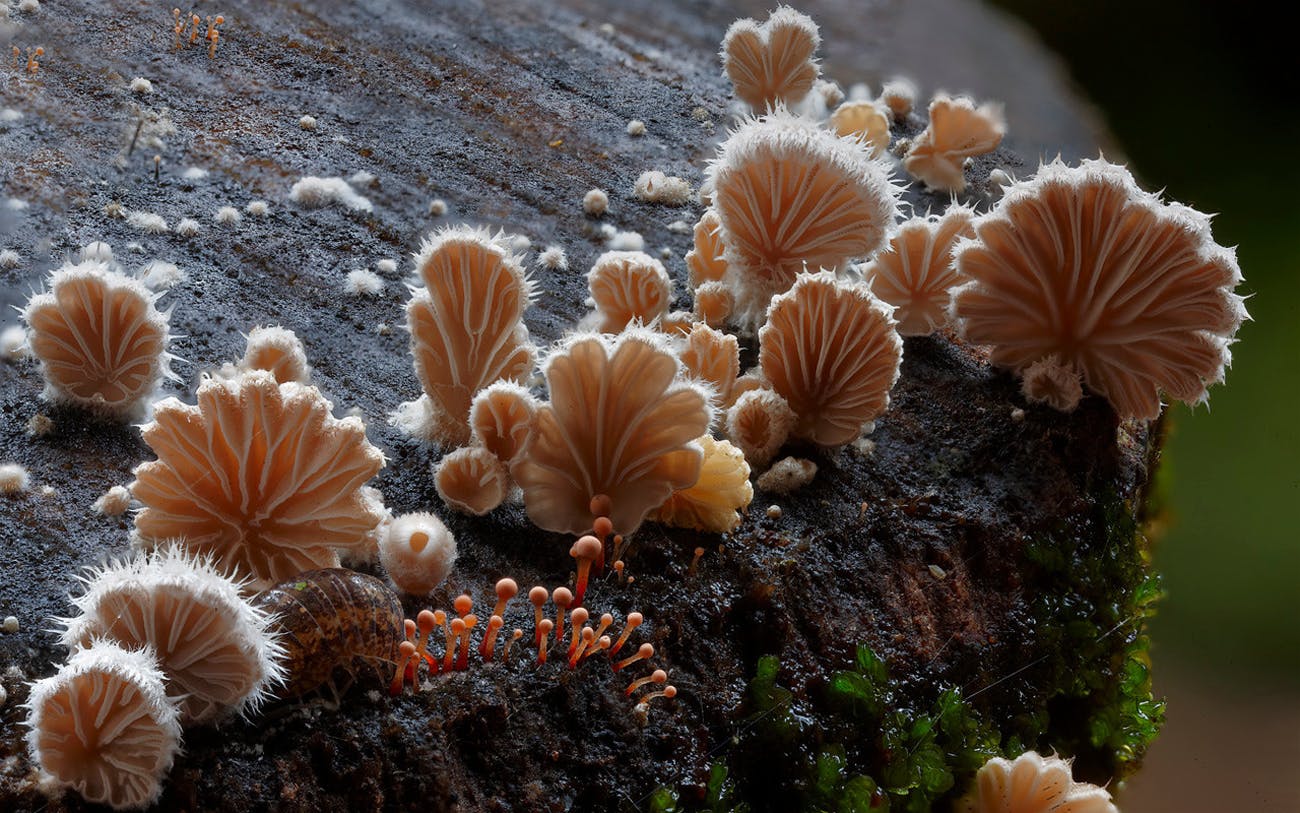 We tend to think about two biological sexes: male and female. But before the evolution of eggs and sperm—before sex cells began to diverge in size and form—organisms couldn’t be classified by sex. The same holds true for many fungi, algae, and protozoans today. Instead of sexes, these species have mating types, with sex cells that differ at the molecular level but not anatomically. And those mating types don’t necessarily come in pairs.

Take the social amoeba Dictyostelium discoideum, which has three: Each type can mate with members of the other two. Coprinellus disseminatus, a white-capped mushroom, has 143, each able to find a partner among the 142 others. The hairy, fan-shaped fungus Schizophyllum commune boasts more than 23,000 mating types (though its more intricate reproductive strategy means that not every type can mate with every other).

Yet most species still have only two mating types. George Constable, a research fellow at the University of Bath, and Hanna Kokko, an evolutionary biologist at the University of Zurich, wanted to know why. In a paper published last month in Nature Ecology & Evolution, they developed a model that predicts how many mating types will emerge in a species based on just three fundamental ecological elements: the mutation rate (which introduces new types), the population size, and—perhaps most surprisingly—the frequency of sex. Their work not only provides insights about the basic biology of these kinds of organisms, but could also contribute to our understanding of how the male and female sexes ultimately evolved.

Many scientists believe mating types evolved early in life’s history as a barrier against behaviors like inbreeding that might be harmful to a population or species. If an organism has sex with an incompatible mating type (including its own mating type), then the union generally produces no offspring.

That restriction aside, logic suggests that species should benefit from having as many mating types as possible. With two types, only half the population is eligible as a mate for any individual. With three, that rises to two-thirds—and so on as more mating types join the mix. Should a mutation lead to the appearance of a new type, it wouldn’t be stuck with the problem of finding a rare match for itself in the population; instead, it would be able to mate with everyone else, thereby producing offspring more quickly and growing its numbers.

“The intuitive expectation is that this should happen for larger and larger numbers of mating types, until you have thousands of them,” Constable said.

To date, the hypotheses about why the number of mating types only rarely soars to enormous heights revolve around considerations of stability. Maintaining just two types may be the better way to go: It allows for simpler, more efficient pheromone-signaling networks, and for an easier sorting system when it comes to passing on organelles from parent to offspring cells. But these theories don’t account for a slew of exceptions.

Then something occurred to Constable. “I realized that we’d been assuming that these species have sex all the time,” he said. That assumption made a huge difference in his predictions about how populations would evolve, because during periods without sex, mating type becomes a neutral trait: Chance events dictate the dominance of some types and the disappearance of many others.

According to the model, large populations that rely relatively more on sex to reproduce can sustain a greater number of mating types, while those having less sex cannot. Constable and Kokko wondered just how rare sexual reproduction would have to be to explain as few as two mating types. Very, very rare, as it turned out: just once every few thousand generations.

“At first, I was kind of disappointed,” Constable said. “That seemed really low.” But when he and Kokko turned to examples from nature, they found that their model’s predictions held up well. “That’s the beauty of it,” said Bart Nieuwenhuis, an evolutionary biologist at the University of Munich. Amoebas, fungi, and other organisms that have two mating types tend to have sex very infrequently, opting most of the time for the faster, less energy-intensive process of asexual reproduction: Some species of yeast, for instance, have sex once in every 1,000 to 3,000 generations, when stressful environmental conditions make it advantageous for them to mix up their genes and improve their odds of evolving new beneficial traits.

Meanwhile, those species that do have hundreds or thousands of mating types, Constable said, are known as some of “the most sexual fungi in the fungal kingdom.” His model also seems to explain other observed sexual patterns, such as the ability of some species to switch their mating type or to reproduce with members of their own type.

“It takes a bit of a long-standing mystery and proposes a solution that is really quite simple, and that ties directly into the biology of these organisms in a clear way,” said Jussi Lehtonen, an evolutionary biologist at the University of Sydney.

In doing so, according to Kokko, it also highlighted that what we understand about fundamental biology, based on just a handful of model organisms (like mice, fruit flies, or E. coli), fails to capture the real diversity of even the most basic functions that occur in nature. “Researchers [can be] a bit myopic when it comes to understanding diversity. Not all life obeys the most familiar rules,” Kokko wrote in an email. She hopes her research will inspire further empirical study of these other, less orthodox species. (Such work might also help scientists build on her model by adding species-specific mechanisms like pheromone signaling and organelle inheritance, which remain important parts of the story.)

The seemingly esoteric rules those organisms live by might even help us understand traits we do find familiar. “We can see the existence of two mating types as a trigger for the evolution of the male and female sexes” that descended from them, said Sylvain Billiard, a biologist at the University of Lille in France. Constable and Kokko’s model could potentially provide a sense of the conditions that were needed to lay the groundwork for that to happen. Nieuwenhuis speculated that, because two mating types dominate when the rate of sexual reproduction is low, situations may have arisen in which it was difficult to find a mate. Those conditions could have selected for specialized, smaller gametes capable of more easily reaching a partner—beginning the road toward today’s sexes.

Nieuwenhuis is trying to see some of this in his lab: He’s been working in fission yeast to create a third mating type able to reproduce with the two types that already exist. “But it’s very tricky,” he said, and he’s been unsuccessful so far.

Constable also thinks the work could have more direct applications. In pathogenic fungi that infect crops, one mating type is often particularly destructive, and the genes that determine that type may be linked to, say, its virulent resistance to antifungals. Understanding why these traits coexist might help with controlling or preventing blights.

Constable and Kokko’s finding, said Zena Hadjivasiliou, a postdoctoral fellow at the University of Geneva, “in some ways … starts with a quite simple and intuitive idea. But sometimes the nicest works come from these types of inspirations.”

Lead image: The fan-shape fungus Schizophyllum commune, pictured here in New South Wales, Australia, has more than 23,000 mating types, each one capable of finding partners among hundreds of other types. It demonstrates how diverse and variable mating type numbers can be, and has made biologists question why the majority of species have only two. Credit: Steve Axford