Why We Need to Map the Ocean Floor

We know more about other planets than we do about our own ocean floors. 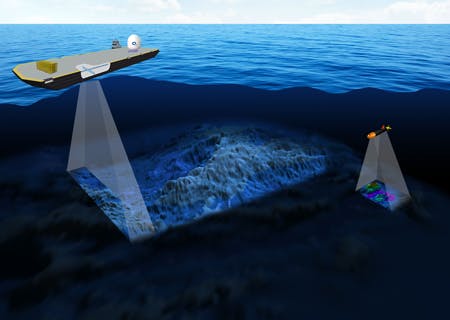 Larry Mayer, a marine geophysicist, gets shivers when he looks at a night sky of stars. He understands why we explore outer space and NASA has spent billions mapping our extraterrestrial neighbors—the moon, Mars, Venus. But Mayer also get shivers looking at Earth’s oceans. So why haven’t we invested in mapping its depths? “You’d think you’d be able to convince people willing to spend so many billions of dollars to map Mars to map our own planet,” Mayer says. “And I think it’s wonderful to map Mars, but I’ve asked myself and others that question, and I think part of it is that NASA has a much better PR and outreach machine. A colleague of mine, Bob Ballard, is always saying, “Well, people always look up and think ‘good,’ and they look down and think ‘bad.’”

Mayer, a professor and the director of the Center for Coastal and Ocean Mapping at the University of New Hampshire, is now embarked on a journey to make people look down and think good. He’s part of a project called Seabed 2030, which is the result of a partnership between the Nippon Foundation, a Tokyo-based philanthropic organization focusing on maritime issues, and General Bathymetric Chart of the Oceans, the global authority on seafloor topography. Today only 6 percent of ocean floors have been mapped. Mayer, who is co-head of Seabed 2030’s Arctic and North Pacific Ocean Regional Center, and his colleagues aim to map the entire seafloor in high resolution by 2030. Nautilus recently caught up with Mayer to discuss the challenge before him.

Why is it important to map the seafloor?

The biggest use in shallow water is safety and navigation. When a ship runs aground, that’s a bad day for everybody, including the environment. And if we think about it in a defense sense, safety and navigation also includes underwater navigation, and that’s a deep-sea problem, too. We have to understand what the seafloor looks like before we lay a fiber-optic cable or pipeline. All kinds of maritime heritage—there are many wrecks on the seafloor, with an amazing record of the history of mankind.

Sonar’s been giving us very good insight into the distribution of things like deep-sea corals, where we will have high biodiversity, where we’ll have low biodiversity—and all these things we just don’t know about: natural hazards, gas seeps, landslides, things like that.

To me, the most exciting reason we map is because we don’t know what’s there. I think I know what I’m going to find, and every time I go out and map with this high resolution, we see new and exciting things—it’s the first step of any kind of exploration.

Is there a connection between the seafloor and climate?

If we think about climate, it’s driven by differences in heat on the planet: warm equatorial areas versus cold polar regions. And the world is always trying to come to equilibrium; it doesn’t like having places warm and places cold. So in the atmosphere we have Hadley circulation trying to distribute that heat, and that atmospheric circulation drives ocean circulation. The most effective way of distributing the heat [in the oceans] is through these deep-current systems. And if we’re going to appropriately model climate, we have to understand the passageways of these current systems, and we can’t model those current systems without understanding where they’re blocked and where there are passages.

And how about extreme weather events?

A tsunami is caused by an earthquake, which will shift the seafloor by a few meters, or by a landslide, which shifts the entire water column just a few meters, if that much. A tsunami wave is actually quite small—it just has a tremendous amount of energy in it, and it travels quite fast across the ocean. But a wave has what we call an orbital motion: The particles are actually turning around in a little circle, and that circle gets smaller and smaller and smaller as you get deeper. And a wave will break when those circles of motion start interacting with the bottom. So a tsunami stays as quite a small wave in deep water until it runs into the coast, into shallow water, where that orbital motion of the particles runs into the bottom and builds it up into a big dangerous wave. There are places that have canyons and places that have shoals; depending on the shape of the seafloor, you can predict where that tsunami will do the most damage in terms of how big it’ll build up, versus where it will dissipate.

So to predict where a tsunami is going to do its damage, and where storm surge in a hurricane is going to do damage, we need to understand the shape of the seafloor.

How does this mapping technology work?

During World War II they had what you call a single-beam echo sounder, which sends out a single pulse of sound that spreads broadly as it leaves the ship and bounces off the seafloor when it finds a change in the properties of the material. And if you have some idea of how fast sound travels in water, which we do, about 1,500 meters per second, you can just count how long it takes to go down and back, divide by two, and you get the depth.

Think about a little flashlight, a Maglite or something like that: If you shine it up on the ceiling, even though it starts off as just a little half-inch-circumference light source, it’s several feet wide by the time it gets to the ceiling. It’s a cone of light. The same thing happens with the sound when you point it down, and by the time it gets to the seafloor, it’s been sonifying an area that’s something like half the water depth.

In the early 1980s, something called multi-beam sonar came along, and although the analogy is wrong, the result is the same. Instead of that one big circle of light from the Maglite, it’s as if you now had hundreds of tiny little laser beams of light across a narrow, narrow swath. The multi-beam creates a very narrow fan in the direction the ship is going and very wide across the ship. And in that fan are hundreds of what we call beams, each one individually measuring a very small area on the seafloor with very high accuracy. So it’s just an absolute revolution in terms of the ability to resolve features on the seafloor. And the swaths that you get are typically three to five times the water depth. So now if you’re in 4,000 meters of water, you can get 12 kilometers or 15 kilometers all at once, with hundreds of individual depth measurements.

A concern I’ve seen regarding this project is that it’s doing the work of resource-extraction companies for them. What are your thoughts on that?

I would turn it around. So we shouldn’t have Google Earth because that’s doing the work of resource-extraction companies? But how much good does Google Earth do? I think the good that it does so far outweighs the advantage that it could present to a resource-extraction company—it’s not even close. Should you just blindly go out and have three quarters of our planet unmapped because it may provide a slight advantage to some company? These companies will go out and do their own mapping anyway at the end of the day.

What’s the most interesting thing you expect to find?

One of the most amazing things to find unexpectedly is often a wreck. There are tons of those around, we don’t know where they are, and we often find them unexpectedly. We’ve found seamounts—4,000-meter-high seamounts that we find when we think nothing is there, and these have impacts on biodiversity and circulation. We find all kinds of interesting structures on the seafloor that we just don’t understand yet. And again we find it looking at it now through a new lens of high resolution.

This article was originally published on the Nautilus blog, Facts So Romantic, on November 6, 2019.