With ‘Downsized’ DNA, Flowering Plants Took Over the World 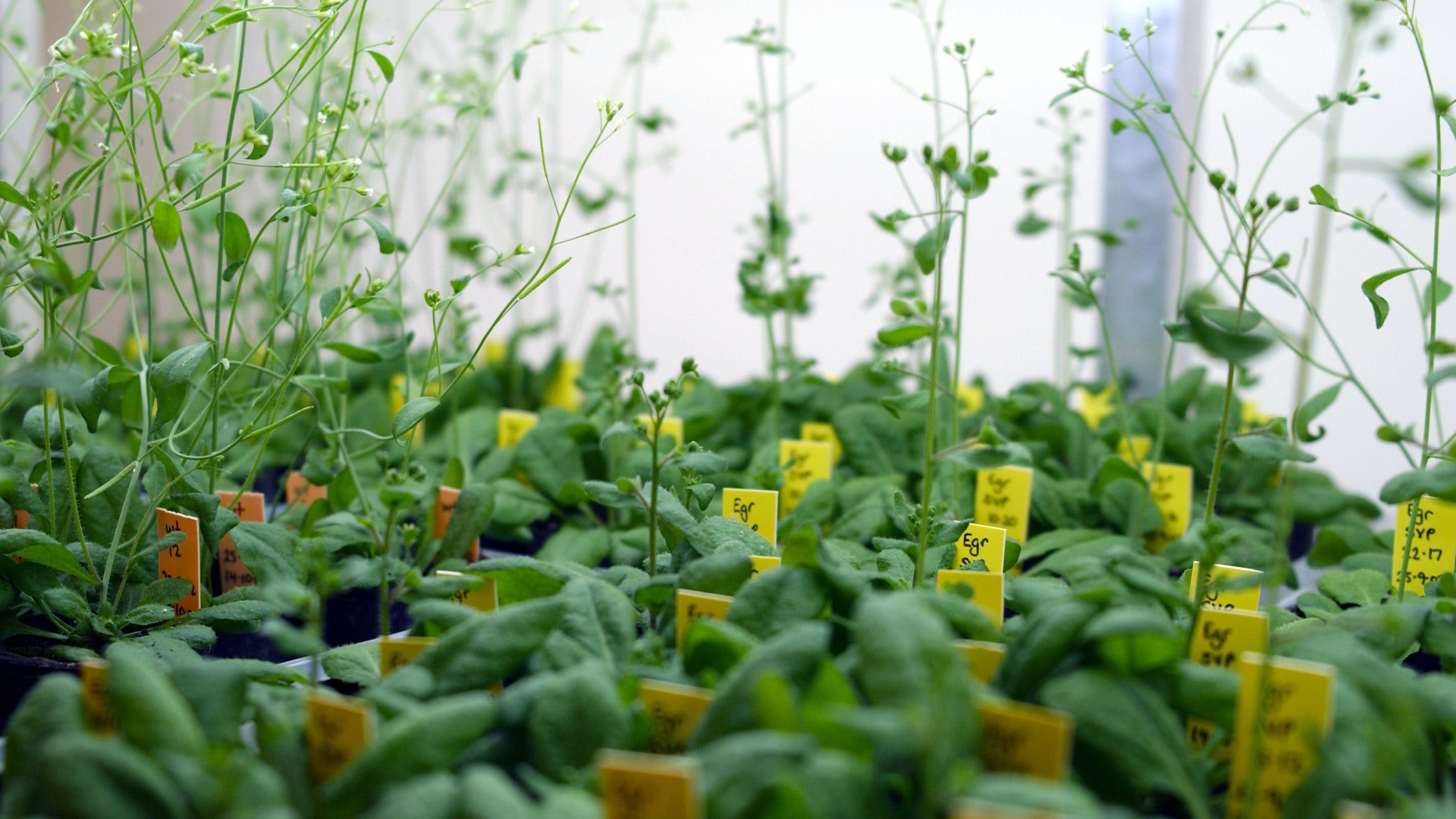 When people consider evolutionary events related to the origin and diversification of new species and groups, they tend to emphasize novel adaptations—specific genes giving rise to new, beneficial traits. But a growing body of research suggests that in some cases, that deciding factor may be something much more fundamental: size. In a paper published today in PLOS Biology, a pair of researchers studying the angiosperms, or flowering plants, has named genome size as the limiting constraint in their evolution.

The success of flowering plants, a group that includes everything from orchids and tulips to grasses and wheat, represents a long-standing puzzle for biologists. (In an 1879 letter to the renowned botanist Joseph Dalton Hooker, Charles Darwin called it an “abominable mystery.”) Terrestrial plants first appeared nearly half a billion years ago, but flowering plants arose only in the past 100 million years, beginning in the Cretaceous period. Yet, once angiosperms emerged, their structural and functional diversity exploded—far outpacing the diversification and spread of the other major plant groups, the gymnosperms (including conifers) and ferns.

Today, the 350,000 flowering-plant species, which have flourished in the vast majority of environments on Earth, constitute 90 percent of all plants on land. Since Darwin’s time, biologists pursuing the answer to that abominable mystery have sought to explain how the flowering plants could possibly have achieved this level of dominance in such a relatively short time.

Perhaps the answer has been so elusive because those scientists have usually focused on the physiological traits that set the angiosperms apart from their relatives. In the PLOS Biology paper, however, Kevin Simonin, a plant biologist at San Francisco State University, and Adam Roddy, a postdoctoral fellow at Yale University, argue that it’s the genome sizes underlying those individual adaptations that really matter.

The Advantages of Genome Downsizing

Species diverge hugely in genome size, without respect to the organisms’ complexity; in an oft-cited example, the onion has five times as much DNA as humans do. In the new study, Simonin and Roddy demonstrated what that variability in genome size means for large-scale biodiversity. They compiled vast amounts of data on genome size, cell size, cell density and photosynthetic rate for hundreds of angiosperms, ferns and gymnosperms, then traced the correlations among those traits back through time to weave a cohesive evolutionary narrative.

The emergence of angiosperms was marked by many events in which lineages of plants duplicated their whole genome. This process opened a door for greater diversification because the extra copies of genes could evolve and take on new functions. But because carrying so much genetic material can also be physiologically taxing, natural selection typically followed up these duplication events by aggressively pruning unneeded sequences. This “genome downsizing” often left flowering plants with less DNA than their parent species had. In fact, by following the family trees of the flowering plants back to their base, researchers have determined that the very first angiosperms had small genomes. “We now know that this not only contributed to their diversity, but may have given angiosperms the metabolic advantage to outcompete the other plant groups,” Simonin said.

He and Roddy posited that angiosperms’ small genomes set off a cascade of effects that over time flowed from their physiology into their structure and ultimately into their ecological role. Less DNA made it possible for the flowering plants to build their leaves from smaller cells, which in turn allowed them to pack more of certain cell types into the same volume. They could therefore have a higher density of stomata—the pores that facilitate the intake of carbon dioxide from the air and the release of water vapor—and a higher density of veins to provide enough water to keep those pores open. And the flowering plants did not have to sacrifice a high density of photosynthetic cells to achieve these benefits.

As a result, flowering plants could turn sunlight into sugars through photosynthesis much more efficiently. The rise of their superior capacity for hydration and gas exchange also coincided with falling levels of atmospheric carbon dioxide during the Cretaceous period, which contributed further to the angiosperms’ competitive edge over their green-plant peers. According to Simonin and Roddy, phylogenetic evidence shows that changes in genome size and the relevant physiological traits occurred together.

Although flowering-plant genomes skew small, downsizing did not make that compulsory; rather, it expanded the range of cell and genome sizes available to the plants. Angiosperms exhibit an enormous, nearly 2,400-fold difference between their smallest and largest genomes, said Ilia Leitch, an evolutionary biologist at the Royal Botanic Gardens, Kew, in England. By comparison, she added, ferns have a 196-fold difference and gymnosperms a 16-fold one. The flowering plants’ greater range “means they can better fine-tune their physiology to the environment, and potentially live in more diverse habitats across different environmental conditions,” Roddy said. That greater promise of adaptability means genome size might also contribute to the flowering plants’ responses to something like climate change.

“It suggests that the ability of flowering plants to have more dynamic genomes puts angiosperms in a place where they have the evolutionary flexibility and capacity to push beyond the boundaries that other lineages like gymnosperms and ferns seem to be constrained by,” said Michael Barker, an evolutionary biologist at the University of Arizona. According to a study published last week on one kind of angiosperm, the plasticity in environmental response afforded by small genomes could also determine whether a plant becomes invasive.

Simonin, Roddy and others are hoping to tease out more about how genome size affects physiological and evolutionary success: what parts of a species’ DNA are lost during genome downsizing, why angiosperms are so predisposed to minimizing their genomes while other plant species are not, and what advantages can be attributed directly to genome size as opposed to other factors. Once scientists gain a better understanding of the mechanism, said Peter Franks, a plant biologist at the University of Sydney, it may be possible to engineer more productive crops.

But the most exciting thing about the angiosperm discovery may be that it points toward what Roddy calls a “fundamental biophysical principle” that might be relevant across more than one kingdom of life. After all, genome size as it affects cell size is not a constraint for plants alone.

Most bird species, for instance, have relatively small genomes, a fact that has been linked to their overall success. The high metabolic rates they need to generate energy for flight are facilitated by smaller blood cells that can transfer oxygen more efficiently—and those smaller blood cells (which, unlike mammalian ones, have nuclei) were also made possible through the downsizing of their ancestral genome. According to T. Ryan Gregory, an evolutionary biologist at the University of Guelph in Canada, that’s why hummingbirds have the smallest genomes of any bird and flightless birds have the largest. Just as phylogenetic evidence pointed to angiosperms having emerged with small genomes that then continued to get smaller, Gregory found fossil evidence of a reduction in genome size in the branch of dinosaurs believed to have given rise to birds, which then continued as later species invested more in their flight ability.

Gregory is currently studying the effect of genome size on brain complexity: Smaller genomes translate to smaller neurons, which allow the brain to fit more cells and connections, he said. That parameter may have played a critical role in the development of more complex brains in vertebrates over time. And even in organisms with really complex brains, namely mammals and birds, “the other constraints that led to small genomes, most notably red-blood-cell size, could have set the stage for increased brain complexity as well,” Gregory said.

Lead image: Arabidopsis thaliana, an angiosperm and model organism, was the first plant to have its genome sequenced. Of all the plants included in the new survey compiled by Kevin Simonin at San Francisco State University and Adam Roddy at Yale University, A. thaliana has the smallest genome, with a diminutive count of just 157 million base pairs. Credit: Carl Davies, CSIRO