Yes, Your Loud Neighbors Are Driving You Bonkers

Why are we so sensitive to residential noise? 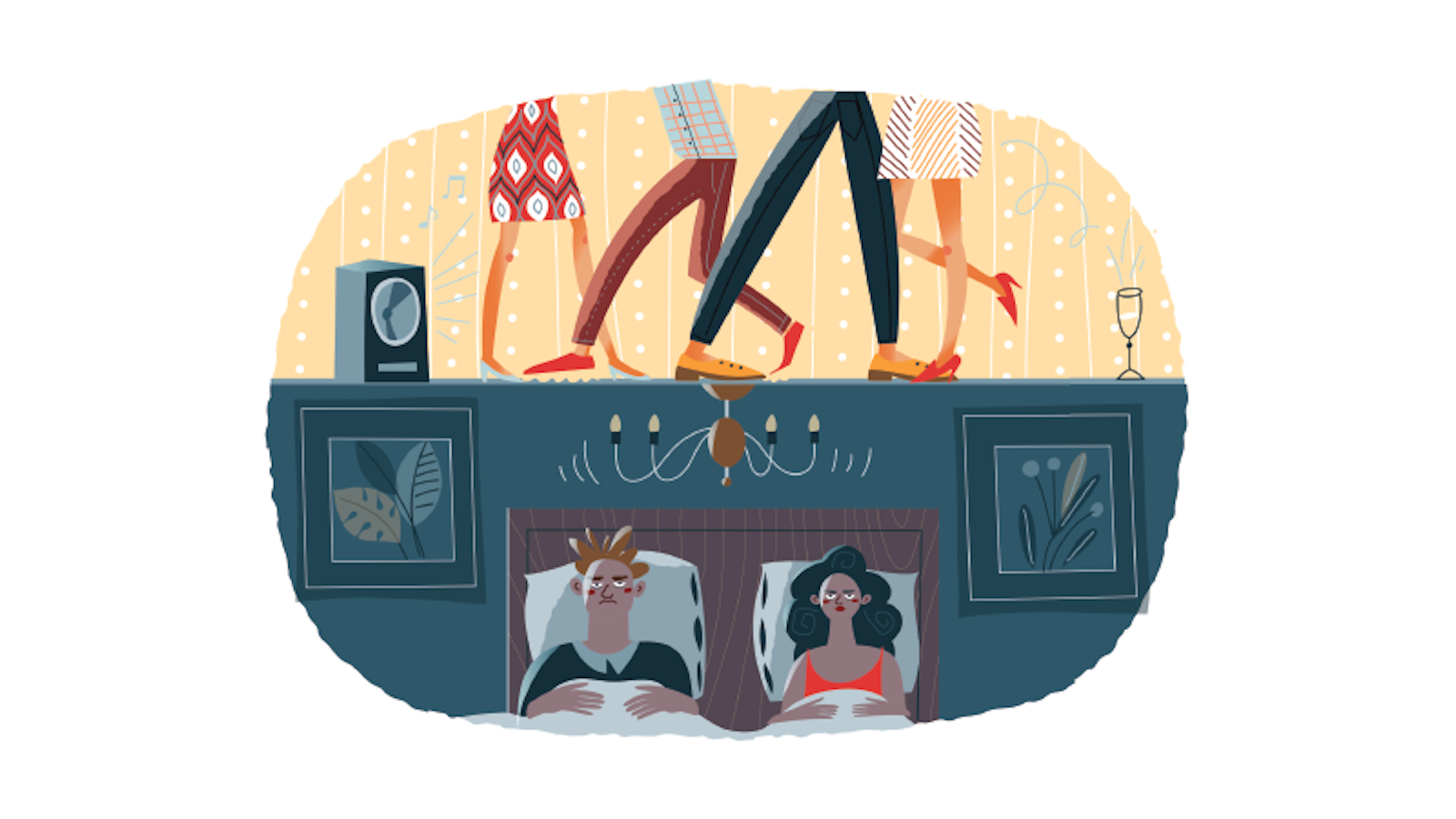 Years ago, my fiancé and I found a dream apartment in Brooklyn. With high ceilings and spacious rooms, it sat next to an urban garden so that trees and shrubs peeked into our windows. Yet we soon discovered a big problem. Our upstairs neighbors had two little boys who woke up around 6 every morning and started tossing toys, throwing balls, and chasing each other. Their similar evening routine began around 6 in the evening, as we got home from work, and lasted all evening.

For about a year, we tried to become immune to noise. After all, we were seasoned Brooklynites, used to honking, car alarms, and fire truck sirens. We tried to ignore the sounds, play music, and keep the TV on. Still, we became increasingly irritable and aggravated, which led to fights. With the arrival of our own baby, we had to move. Our new apartment overlooked a gas station, but at least there were no bangs from above. For a long time, I considered our retreat a weakness of character. If we weren’t so abnormally sensitive, we’d still be enjoying our lush green paradise.

We have evolved to notice sounds in case they bring danger

Turns out, we weren’t abnormally sensitive at all. Our reaction to the noisy upstairs neighbors was on par with everyone else’s. Residents of multistory apartment buildings regularly suffer from what acoustic scientists call “impact sounds”—distinct sounds of short durations like bangs, thuds, and thumps. One study has noted that floor impact sounds were the most annoying noise type in apartment buildings—and were generated primarily by children between 6 and 9 years old.

Recently, a team of researchers led by Markus Müeller-Trapet of Canada’s National Research Council designed a series of experiments to simulate and measure people’s perceived annoyance from a noisy upstairs neighbor. In a two-floor setting, they recorded about 60 different sounds, including everything from walking barefoot to bouncing a ball to dropping a hammer. They played the sounds to about 100 participants in Canada, Germany, and Korea, who rated their levels of annoyance from 0 to 100. “The results differed a little bit, but the bottom line was always the same,” says Müeller-Trapet. People hated loud steps, ball-bouncing, and, naturally, hammers. As I listened to the recordings, I felt as if bricks fell on my head periodically. I was stressed and grumpy, just like I used to be in my old apartment.

Why are we so sensitive to these impact sounds, as opposed to continuous ones like music or a steady hum? “The traditional definition of noise is unwanted sounds,” says Mathias Basner, a professor of psychiatry and neuroscience at the University of Pennsylvania School of Medicine. People who go to rock concerts don’t mind loud music because they expect it. Loud neighbors, on the other hand, disrupt what we’re doing, break our focus or concentration, and annoy us to no end. Try as we might, we can’t tune them out.

We have evolved to notice sounds in case they bring danger, so our auditory system is constantly on, even when we are asleep. Unexpected noise means an abrupt change in our surroundings. “A change in the environment is a potential danger signal,” Basner says—think of the arrival of a predator or a falling rock. In the old days of living on the savannah, we would weigh our survival tactics, choose between fight or flight.

Turns out, we weren’t abnormally sensitive at all.

Today, even if we don’t fight or flee when our neighbors drop a hammer, our bodies mount the same physiological response. We release stress hormones like adrenaline and cortisol. Our peripheral blood vessels tighten, our heart rate goes up, and our intestines stop their normal movement for a little while—so that all of our blood is available to the skeletal muscles to maximize strength or speed. Even the blood itself changes in such a way that it coagulates easier, says Basner—in case we bleed. “All of these are precursors of cardiovascular disease,” he says.

Research has linked neighbor noise annoyance with a host of mental and physical health symptoms. And although it looked at unwelcome noises in general, another study found that exposure to noise messes up our central nervous system, leading to emotional stress and anxiety and increases the risk for depression, cognitive impairment, and neurodegenerative disorders.

According to the United Nations, by 2050, two out of every three people will likely be living in urban areas, so this problem will only get worse. “The more we have these huge apartment buildings, the more we will need a good protection from these types of sounds,” says Müeller-Trapet, whose team aims to help develop better building codes to make urban dwellings more soundproof. “Our goal is to provide some design guidance to all the builders.” Until then, annoyed tenants may have look for quieter apartments like we did. It was a smart move—and a healthy one—after all.

(Take this survey to see how sensitive you are to apartment building noise.)